BACK TO ALL OPINION BLOGS
Currently reading: Red Bull: ‘2.2 seconds and we smashed Ferrari’
UP NEXT
Steve Cropley: No hyperbole is enough for the Porsche Taycan

What really goes on during a Formula 1 pitstop? Red Bull Racing invited us into the garage to have a look
Share
Open gallery
Close
Share story

So it was with a great deal of interest – and privilege – that we went through the back door of the Red Bull Racing garage at the British Grand Prix to observe how the mechanics operate and keep the F1 show on the road. Without these guys and girls, Max Verstappen wouldn’t even get as far as the team radio to be able to slag off the engine supplier, nor Daniel Ricciardo the chance to enjoy a champagne-sweat cocktail on the podium.

In Red Bull’s case during the race, there’s about a dozen on each side of the garage, sat with their backs to the garage entrance watching various screens (from the live TV feed to data tracking), each wearing a set of big headphones that we were allowed to wear, too.

Long spells of silence are interrupted by the odd check in from a driver for progress on a rival, and a frequent turning of the airwaves blue with comments on the rate of progress (always too slow…) of a car in front of them.

So there the mechanics sit, headphones on, one and only pitstop of the race done already. One was having an ice lolly, a couple of others were on WhatsApp on their phones, one amusing himself having been sent an ‘It’s Coming Home’ meme that was being passed around the internet at the time England were definitely going to win the world cup. Job done.

Then it happened. A car goes off at the first corner. A switch is flicked, and the mechanics move to the edge of their seats. Over the radio, several quick but calm messages come: “Could be a safety car” is the gist of it, in among all the code. 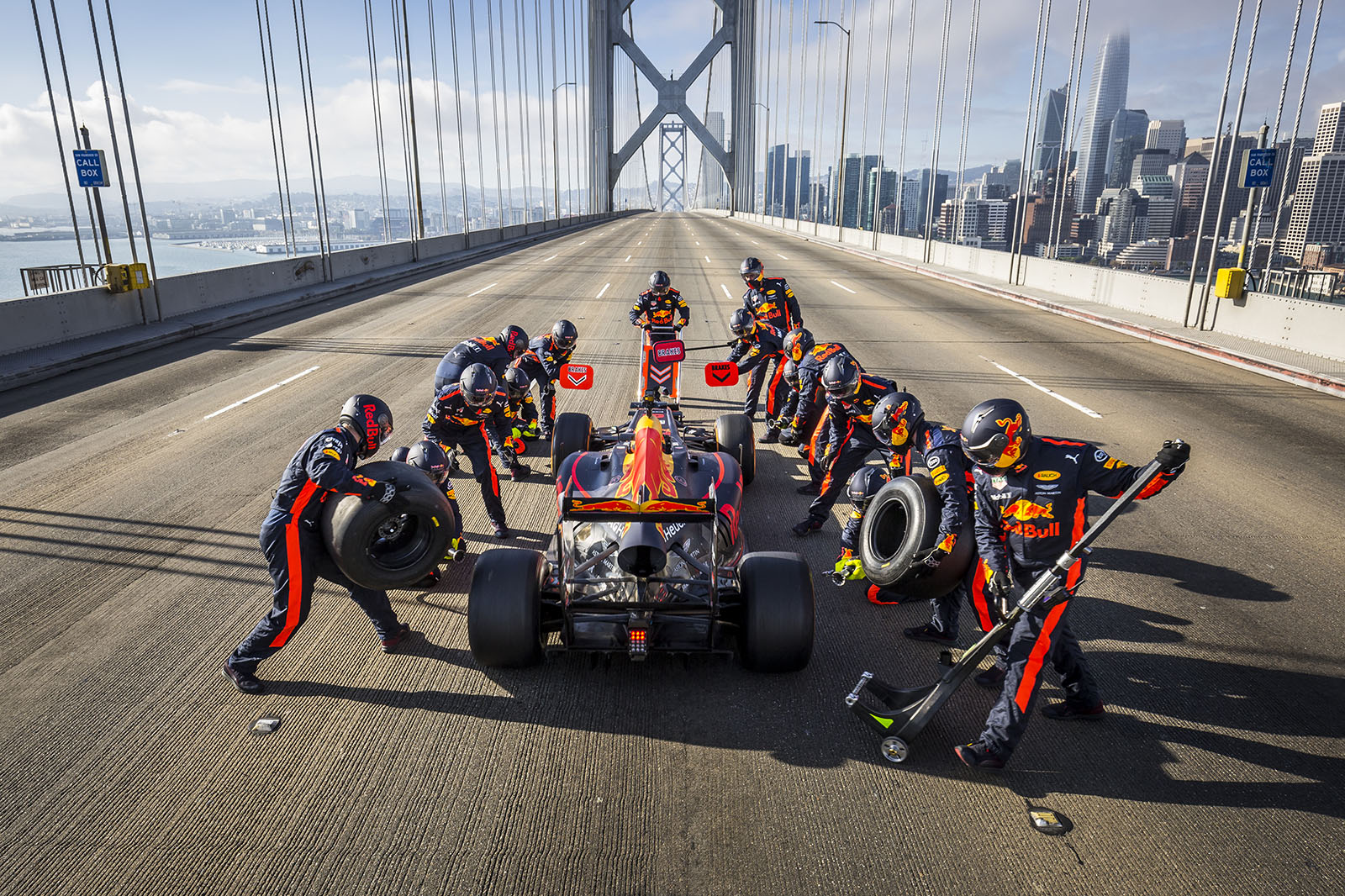 And then the safety car appears, F1’s equivalent of a joker to inject a bit of action and chaos into proceedings, given the advantage of what can be gained by pitting for fresh tyres at the right time. Red Bull senses that opportunity.

“Twenty seconds” comes another message on the radio. Still, watching the mechanics, you’d never guess that the 20 seconds refers to how close one of the cars is to arriving in the pit bay for new tyres. They’re all on their feet with helmets on, true, but they’re not yet in position.

I look up to the TV monitor on the back wall of the pits and a Red Bull entering the pits appears on it. I turn around back to face the garage, and everyone has gone, along with a whole rack of tyres. They’re all there now, waiting. In comes the car, off go the wheels, on go the wheels (not before a huge sudden puff of black smoke from where something does not agree with what’s being asked of it ), and off goes the car.

Little more than a couple of seconds long, this is the most intense and impressive piece of live sport I’ve seen in front of me. It’s hard to process just how many little things have to work together in perfect harmony at once for a pitstop to work. Yet this is a normal thing for the crew, with little fanfare.

There’s a clear buzz from the mechanics as they come back in. Helmets are removed to reveal smiles, hugs and high-fives are exchanged across the garage, and then out come the ice lollies once more and seats taken as if nothing had happened.

“2.2 seconds and we smashed Ferrari” comes the message from the pit wall over the radio. “Good work guys.”

In a sport that can be decided by thousandths of a second, human fallibility in the pitstop is an omnipresent threat that must be maddening to the engineers squeezing through multi-million aero upgrades that might be worth a place in qualifying, but rendered worthless in a race by human error. The pit crews have my respect.

Formula 1 vs Le Mans: why GP racing is still the pinnacle

A well rehearsed routine, each individual has one part to play, get it right and her presto!...2.2 seconds!,old adage, the more you practice the better you get, and maybe just once you absolutely nail it.