BACK TO ALL OPINION BLOGS
Currently reading: Why the RX is a lucky charm for Lexus
UP NEXT
Opinion: Nascar's lions ready to Roar before the 24

Why the RX is a lucky charm for Lexus

Car companies regularly make claims for being first with this, that and the other, but Lexus really was first to bring us the premium crossover, and with a hybrid driveline to boot. The RX has long been a winning Lexus bet, three generations selling 2.1 million examples since 1989. These constituted one in three of all Lexuses, making it a vital model for the brand. The fourth-generation version, revealed in New York, is said to have undergone what Lexus is calling the goosebump test, this reaction required from Toyota boss and car-guy Akio Toyoda before he will sign a model off.

The latest version is striking for the sharper-edged design language that the brand is now chasing, the spindle grille that’s certainly assertive and the interesting take on the shape of the rearmost side window - although, disappointingly, most of the glass is opaque. Behind it lies an interior furnished with richer materials than before and leather in colours far bolder (but tasteful) than we’re used to from Lexus, making for an inviting cabin. There’s a big 12.3in screen, too.

The RX is propelled by a revised 3.5-litre direct-injection Atkinson cycle V6 and an electric motor, their combined output around 296hp. The driveline sits within a strengthened body structure that rides on McPherson struts up front and double wishbones at the rear, the system tuned for a more dynamic driving experience, claims Lexus. You also get a long list of the active electronic safety systems that every premium machine must have these days. Given its importance, it will be a surprise if this new RX doesn’t land decently close to the bullseye, and the spontaneous applause that greeted its unveiling will doubtless encourage its makers. 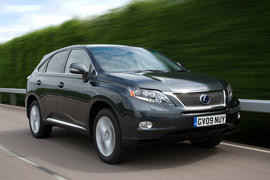 As ever with Lexus nowadays they are desperately vying for some attention - any attention. One can only assume that they fit similar people. Lexus clearly decided that it cannot succeed based on merit.
This car does have some features one could consider interesting, but only here and there - and from very specific angles. Overall I agree with the overall opinions above: it is an epically ugly contraption.
Moparman 2 April 2015

"The RX has long been a winning Lexus bet, three generations selling 2.1 million examples since 1989."

Surely the LS is the only Lexus that has been on sale since 1989? The RX came out in 1998 with a very bland look that has progressively gotten blander and now has an unfortunate maw. However, the maxim that you drive the vehicle from the inside has ensured the success of these cars since day one. They are well-built and decent to look at (even if I see more than a few bits from my Toyota strewn about its cabin) and it sits high enough to be a favourite of soccer mums every where. That trend will likely to continue.

I believe the RX450h to be the only transverse engined car available with air-suspension. Though with BMW launching its X5 xDrive40e and Mercedes-Benz the GLE 500e and Porsche already having the flawed Cayenne S E-Hybrid it's perhaps time Lexus Hybrid Drive gained a plug-in capability. Toyota seems to be falling behind with non-epicyclic hybrid tech.
View all comments (5)