BACK TO ALL OPINION BLOGS
Currently reading: Why the UK car industry needs more skilled youngsters
UP NEXT
Opinion: The future of the BMW M5 is now as a plug-in

Although domestic car manufacturing is currently booming, the companies involved are concerned about the lack of young people joining the industry
Share
Close
Share story

It's an annual event where the UK's car industry trade body pulls together the great and the good from the global car industry as well as a smattering of UK politicians.

As you may expect, the overall news is good. The UK industry is largely on a roll. Now 80 per cent of cars made here are exported and half of those go beyond Europe to markets such as China and the USA.

The value of those cars has also doubled in the past few years too, largely thanks to the numbers of luxury and premium cars we're making here and selling abroad.

One overriding theme that emerged, though, is a concern for the future. Not because we can't sustain this success but a concern about how we're going to get young people into the industry.

There simply aren't enough engineers and other skilled people coming through the system. Not enough people are studying core subjects such as electronic engineering at university. In fact, our universities are currently churning out about half the number of engineers we actually need.

A sobering fact came from Ian Harnett, purchasing director at Jaguar Land Rover. Out of a department which is now 1200-strong he has 109 vacancies that he's struggling to fill. This situation is reflected in his organisation and in the wider UK industry.

There are talented youngsters out there and we at Autocar know it better than most through running our annual Autocar Courland Next Generation Award. There just aren't enough youngsters who just 'want to make things'.

It strikes me that the government and educational establishments need to get on top of this before it's too late. 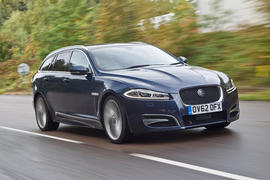 Jaguar XF Sportbrake is a sporting estate under a different name, but is it any good?

As an engineer I worked in the motor industry in the early 80's, but left to treble my salary in the electronics industry. This was despite the fact that back then they were also desperate to attract & retain engineering talent. The supply is there if you're willing to pay for it.
Sporky McGuffin 11 June 2014

I think a big part of the

I think a big part of the problem is that engineering simply doesn't get the respect it should in the UK. Give someone a toolkit here and you can put "engineer" in their job title. Why do four years at university when people who ask what your job is assume you tighten toilet handles for a living? The company I work for calls all its installers "engineers" despite not one of them having any appropriate qualification.

The profession therefore gets seen as dirty, grubby, menial and not aspirational. Richard H's comment about engineers not knowing a spanner from a screwdriver throws this into sharp relief - he clearly doesn't know the difference between an engineer and a technician or mechanic. Not his fault; the fault of the Institute of Engineering & Technology and of the Royal Academy of Engineering, neither of which has done enough to promote the profession, and of a series of governments that didn't protect the title in the same way as "doctor", " barrister" or similar.

I know excactly what the difference is between a mechanic and a technician and engineer. I started as an apprentice, then a technician and worked my way up to engineer. A lot of engineers have gone straight to Uni and missed the practical experances of building and fixing things. So when, for example they design things, they have not taken in to account how to build and fix it.

We need more technicians, we need more mechanics, its a shame (and wrong) that the title "engineer" has been hijacked but this is because the titles technician & mechanic have been allowed to degenerate and regarded as unskilled, which they most definately are not.As you say, the institutes are to blame for this & don't seem to care and only want to push graduate schemes. This gives the impression that a job in engineering or production is dirty and smelly, which most certainly isn't the case. In Germany an Engineer is respected, here, they think you're an oily rag. Its very wrong.

I agree in part, but you also have to look at the competition

Not exactly a youngster any more, but I'm an Engineer and proud of it (and have been for nearly 25 years). I grew up in the Motor Trade (my father built a business that my brother now runs), but went into Electronic Engineering, and now work in a company which develops chipsets for Smartphones (which are being adopted for telematics in cars these days).

Unfortunately, I doubt I'd ever make the switch to the Motor Industry myself, despite having many of the skills needed. I'm probably seen as too old, certainly too expensive, and the industry has had too many ups and downs (and a history of *not* retaining people when times get tough) for me to relocate.

My company pays graduates very well, and this continues further up the scale - there is a global talent war in the electronics sector. If JLR and motor industry in general aren't ready to pay then they aren't going to get the best people. Location in the midlands also means that they are far from the hub of electronics and software engineering in the Thames Valley.

My experience in schools and universities is that there are a great many talented young people out there who understand both the social value of engineering and that it can be a great career. However, recruiting companies need to take a long-term view of their people if they are to attract and retain the best. That means world-class training and benefits, great career paths, and good salaries. This is as true for technician grades as for engineers.

Yes, the IET and Royal Academy are useless, but I long-since gave up worrying about it.

Same in other UK engineering

Same in other UK engineering and technical subjects. I work in aircraft maintenance and despite being in my 40's hardly ever see anyone younger than me. Nobody seems to be much interested any more.
View all comments (5)