BACK TO ALL OPINION BLOGS
Currently reading: Why Chinese firm Geely has made a Smart investment
UP NEXT
Matt Prior: Why lane-keeping assist systems need a rethink

Why Chinese firm Geely has made a Smart investment

Chinese car firm Geely is quietly becoming a major global player in the car industry, through a series of clever investments in mildly distressed car brands.

Geely’s skill is spotting firms with an inherent brand value, which it can reinvigorate with a dose of investment, a dash of guidance and a refreshingly hands-off approach.

It bought Volvo from Ford in 2011 and has reinvigorated the Swedish car firm, turning it into a major force in the premium SUV market. The purchase of the London Taxi Company (now rebranded the London EV Company) has given it a solid commercial vehicle platform. The 2017 purchase of Lotus has secured Geely a flagship sports car brand with a rich history.

Taking a 50% share in Smart from Mercedes-Benz parent firm Daimler is another shrewd move – and crucially it’s one that works for both firms. Smart has struggled in recent years, with Daimler intending to reinvent it as an electric-only city car brand.

But such a move requires plenty of investment, with no guarantee of a return. In a joint venture, Daimler now gets to share the burden of that investment. While Mercedes-Benz will lead the styling of future Smart cars, they’ll be built by Geely in China.

Geely gets to promote a brand with European heritage – and, crucially, the credibility of Mercedes-Benz involvement – which could give it a crucial edge in the huge Chinese market for small electric cars.

While Smart isn’t exactly in rude health, it still has a brand identity and credibility in Europe that Geely can build on – exactly as it has done in the past with Volvo, and is doing now with Lotus.

A shrewd investment by Geely, then, and crucially one that also works for Daimler. The best partnerships are those in which both sides stand to benefit – and this is one of those. 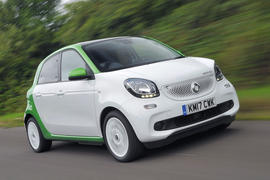 If it can turn around the fortunes of Smart to be a profitable company - something Mercedes has failed to do in 20 years - then that will be some achievment. Maybe European customers are too wealthy to appreciate the value of the brand and it will have more success in China where EVs are better established?

The wider implications are

The wider implications are worrying. It is seemingly harder and harder to make small cars profitably in Western Europe - ironic, given that they are best suited to this environment.

who can say for sure this is not essentially the Chinese government, through front private compnanies, buying up valuable Wester companies and Western expertise?

No one can say for sure

But the journalist seems unaware that Geely are now the largest individual shareholder of Daimler, having bought a 10% stake last year. The Chinese are playing chess, whilst everyone else is playing checkers. Gong xi fa chai / gong hei fat choy.

The Chinese have learnt a lot from America

After WWII, America capitalised on a broken Europe, colonialism by capitalism. The US still does it now through Apple, McDonalds, Facebook et al.

The Chinese are sitting on a huge pile of Dollars & Euros and are feeding it back into to the West and emerging markets through acquisition and foreign "aid". They are building infrastructure in Africa in exchange for mineral rights and investing in large scale civil projects in the West. Buying into established Western brands is, effectively, a Trojan Horse exercise that could lead to loss of control across swathes of industry.

Scare story? possible but not improbable.

Don't leave out the details

You forgot to mention Li Shufu, the boss of Geely, is also the biggest single shareholder of Daimler. Then, when they bought Lotus, Geely also bought 49.9% of Proton and will use the Malaysian carmaker to spread their influence in RHD markets especially in South and West Asia via rebadged Geely products with an aim to sell at leat 400,000 cars a year by 2027.

Wildly off target for a decade

After reaching a zenith in about 2005, ten years later the company now only sells something that looks like a melted Daewoo Matiz. No wonder no one buys their cars- neither stylish nor cheap enough to forgive.

Yet they had all of those Mercedes platforms and engines at their disposal- why they didn't build a small pseudo-SUV and Forfour from the second gen A-class was a mystery.