From £22,3558
The seven-seat Volkswagen Tiguan Allspace lands in the UK, and it impresses in the same way the regular SUV does, but is the mid-range diesel the engine to go for?
Open gallery
Close

It’s taken Volkswagen an age to warm to the SUV theme, but expect variations to now flow freely.

The Tiguan Allspace – box-fresh in the UK, with first deliveries in January – is one such model. It’s a car we’ve previously driven abroad on its international presentation to the press, and adds two third-row seats to the existing (and hugely successful) Tiguan package, bringing the total occupant count to seven.

Though clearly an immediate relation to the regular Tiguan, the Allspace gets a revised front end inspired by the colossal, US-only Atlas. The radiator grille is taller, the bonnet is higher and there are longer rear doors, while the observant will spot a freshly penned kink in the C-pillars. Pretty? Not exactly, but it’s true to the subtly aggressive aura of sterile solidity that Volkswagen designers currently favour.

The big change is that the wheelbase is 109mm longer, not only creating space for the pair of seats in the boot but also increasing seats-down capacity (that’s both rows of rear seats) from 1655 litres in the standard Tiguan to 1775 litres. That may sound impressive, and it’s certainly enough space for most requirements, but while it shades the likes of the BMW 5 Series Touring, the Skoda Kodiaq will swallow 2005 litres in a similar configuration.

Volkswagen expects nine out of 10 buyers to opt for diesel power. There’s a choice of three engines: a 2.0 TDI in either 150 (148bhp) or 190 (187bhp) trim, and a range-topping 2.0 BiTDI with 236bhp. Two petrol options are also available in the UK, although both the 1.4 (148bhp) and 2.0 (177bhp) TSI models will be a rare sight. Incidentally, we’ve already experienced the big-hitting twin-turbo diesel in the Arteon, where it felt effective but pretty uncouth.

Trim levels are similar to those of the Tiguan, although the Allspace range forgoes base SE trim and begins at SE Navigation. That means plenty of chrome and body-coloured trim and an 8.0in touchscreen and cloth upholstery within. SEL trim brings VW’s 12.3in, Audi-style Active Info Display in lieu of conventional dials, as well as four selectable profiles for the 4Motion four-wheel drive system. Top-spec R-Line cars get 20in wheels (rather than 19s) and sports suspension, and although we’ve yet to test that model, neither of those additions sounds wholly beneficial for the Allspace’s remit as a family car. 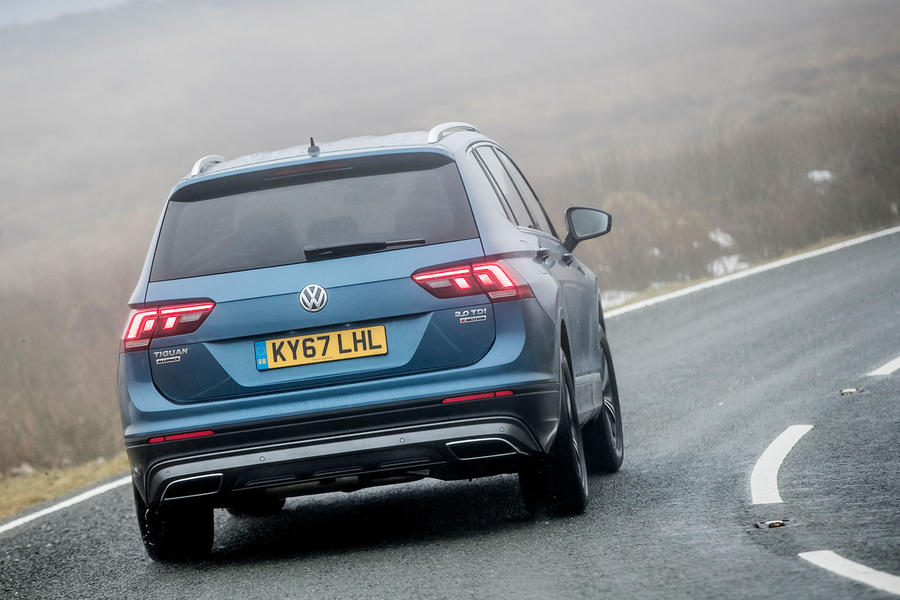 With sound rationale, Volkswagen expects the 148bhp 2.0 TDI to be the big seller; it’s an adequately strong, frugal engine that’s well suited to duties in a larger car. We’ve previously described it as "striking the best balance of speed and economy in the line-up", and given that it manages near-enough 50mpg and a sub-10.0sec 0-62mph time, it’s hard to argue with that.

Going for the mid-ranking turbodiesel tested here – the same 2.0-litre unit, only stoked to deliver 187bhp – trades some aural refinement for a little more poke, although the differences in the overall experience are subtle.

Is it worth the extra £1250? Well, a more powerful engine is a nice thing to have, and through its mid-range this TDI makes short work of the Allspace’s 1845kg bulk. Peak torque of 295lb ft – on offer from just 1900rpm – also allows the seven-speed dual-clutch gearbox to calmly default into a higher, quieter gear when you’re pottering about. The same applies on the motorway, where the Allspace feels as undemanding as a car of this size is ever likely to be and solid as a rock. The cushioned ride, which is a highlight of the five-seat Tiguan, remains intact (as you’d expect, given that mechanical differences between the two amount to nowt).

Much the same can be said for the 2.0 TDI 150, though. Fuel economy? Officially it’s identical for the two cars, at 47.9mpg combined, although the easy-going NEDC test is responsible for that spec-sheet peculiarity. In the real world, enjoying the benefits of the TDI 190’s higher state of tune will of course increase fuel consumption, and that tuning also lends the engine’s timbre a slightly rougher edge under load. All things considered, we’d stick with the TDI 150.

It’s unlikely many of these cars will ever be pushed particularly hard along a British B-road, but should the need arise, you’ll find the Allspace to be a neat, predictable steer with good grip levels. The slow steering takes a bit of getting used to, but at least it’s accurate, and well-controlled body roll makes it possible to carry decent pace without the feeling that you’re losing control. In the wet, especially, you can detect the 4Motion all-wheel drive system working the rear axle through slippery bends, and the Allspace remains superbly easy to place for such a bulky thing. It's also worth noting that equipping the car with 4Motion ups its towing capacity – from 2000kg to 2400kg in the 150 TDI.

That the front of the cabin feels so spacious – thanks in part to the sunken transmission tunnel and low scuttle – only helps its cause in this respect. It’s a shame the seats are oddly unsupportive – not necessarily because big bolsters are essential for this car, just because it’s nice to feel secure.

As far as passengers are concerned, the space generated by opening up the MQB platform means a 6ft 2in adult in the middle row can happily sit behind someone of the same height, despite the space eaten up by the back row. As for that third row of seats, if you’re much over 5ft 2in tall, forget it. Head room, meanwhile, is plentiful wherever you sit. Elsewhere, the interior feels very well put together, even if it is all a bit grey and soulless. 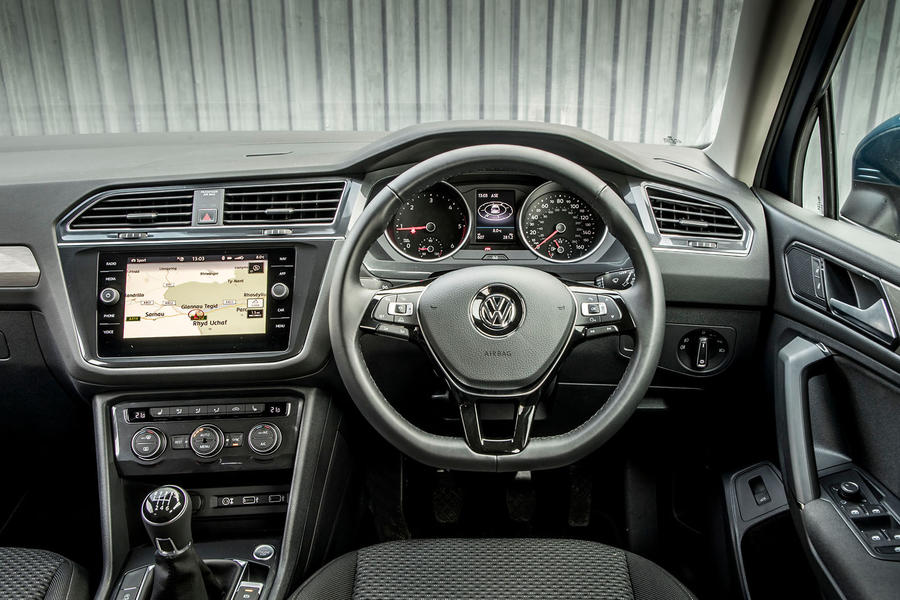 If the question is whether you should opt for the TDI 190, the answer is that you probably should not.

The characteristics of diesel power certainly suit the Allspace, but the extra shove of the 190 over the 150 does little, if anything, to improve the overall package. If the car is going to be loaded more often than not – five or more passengers, plus luggage, or if you’re towing – we might be tempted by the extra torque, but if not, you’ll be better off saving yourself some cash. The less powerful engine is also a touch more refined, so there’s scant reason to feel you’re missing out.

The more pertinent question is whether you should buy an Allspace at all. Equipped with the same engine, Skoda’s Kodiaq is cheaper, more spacious and just as driveable. 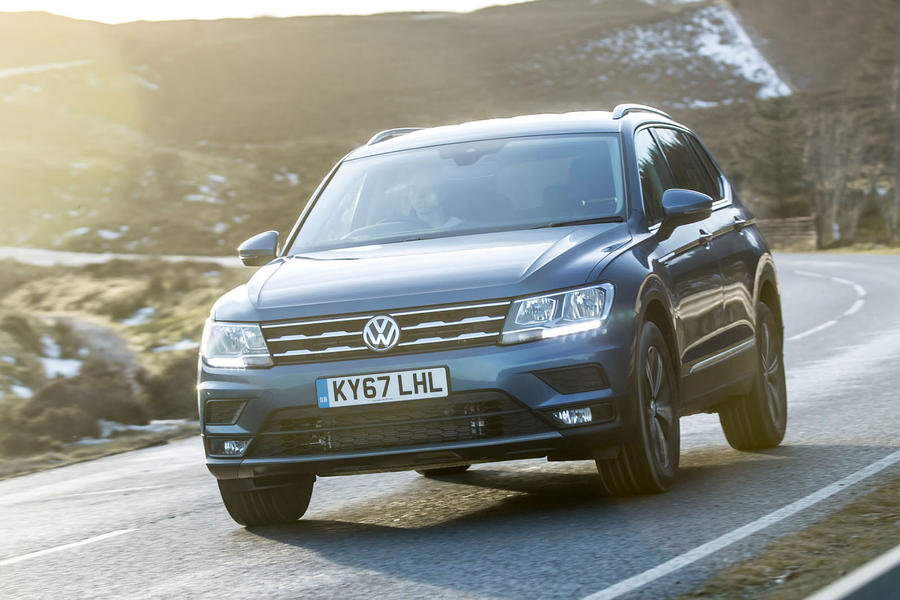 Autocar hits it on the head,

Autocar hits it on the head, the rear most seats are only suitable for dwarfs.  Try putting young children or elderly short relatives in them on a driveway, difficult enough, nigh on impossible in a supermarket car park. I don't know why car companies market them as 7 seaters, it should be like the coupes of old- 2+2. In this case 5+2.

Emm interesting play on what it actually said

Not according to the VW blurb, no mention of height restrictions there.....With a longer wheelbase and room for up to 7 people, the new Tiguan Allspace is perfectly poised to transport you to new adventures.

What do you need car magazines or test drives for, then?

Not according to the VW blurb, no mention of height restrictions there.....With a longer wheelbase and room for up to 7 people, the new Tiguan Allspace is perfectly poised to transport you to new adventures.

...I've just realised I only looked at the Highline version, the innapropriately small petrol may well be available on the more proletarian trim lines.

Don't look at the Kodiaq then, that has an even lower powered 1.4 available