From £22,3557
Full-fat diesel variant of the Volkswagen Tiguan delivers plenty of power but better versions of the crossover are available for less cash
Open gallery
Close

This 237bhp 2.0-litre twin-turbo Volkswagen Tiguan is the fullest, fattest diesel you can have in the new car's range. It can be ordered either as a comfort-oriented SEL or a sportier R-line and it provides 4Motion all-wheel drive and a seven-speed DSG transmission as standard.

That 237bhp easily shades anything Land Rover can offer from its size-equivalent stable of Discovery Sport and Range Rover Evoque, besides outmuscling the most powerful 227bhp BMW X1 xDrive 25d, if not the 375bhp Mercedes-AMG GLA 45 and the 334bhp and 362bhp RS versions of the Audi Q3. We’re considering premium models, incidentally, because no SUV from a volume maker comes close to this Tiguan’s power output.

Of course, most SUVs aren’t bought to advance the horizon at a breathless rate and this Tiguan is more of an all-rounder than the performance models among this bunch. But that’s where this Tiguan’s projected £38,000 price positions it. 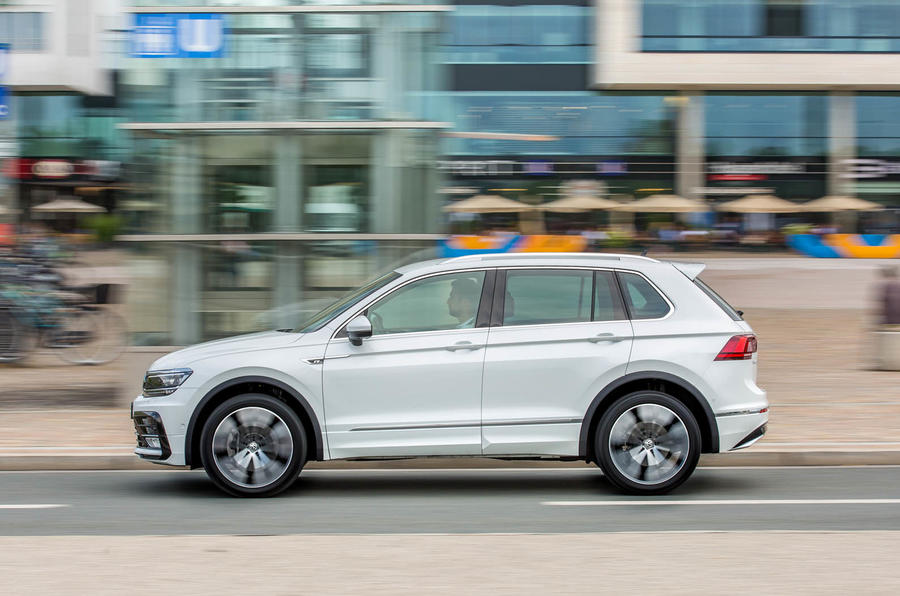 And its engine is as much about fuel economy as chasing sports cars, with its 44.1mpg combined and 167g/km easily improving on the figures of these premium rivals. Its injector pumps fuel it at a pressure of 2500 bar and the 200 bar combustion pressures call for a bespoke cylinder head and head gasket that can clamp it to the block without bursting. The block itself, though, is common to less potent 2.0-litre diesels. For this bi-turbo version, the turbos are sequential and integrated, with the larger one pumping early on and the smaller one force-feeding at high revs.

This latest phase of the Tiguan roll-out incorporates some connectivity upgrades and what VW calls security and safety features. Bundled under the Car-Net brand, these include the now mandatory ability of the car to contact the emergency services post-accident either via an occupant’s button press or, if they’re unable, by remotely determining the unfolding of an incident and its severity. Features previously the preserve of VW’s electric models – such as using your smartphone and an app to check its fuel level, confirming that the car is locked and triggering a breakdown call by pressing a button – are also provided. 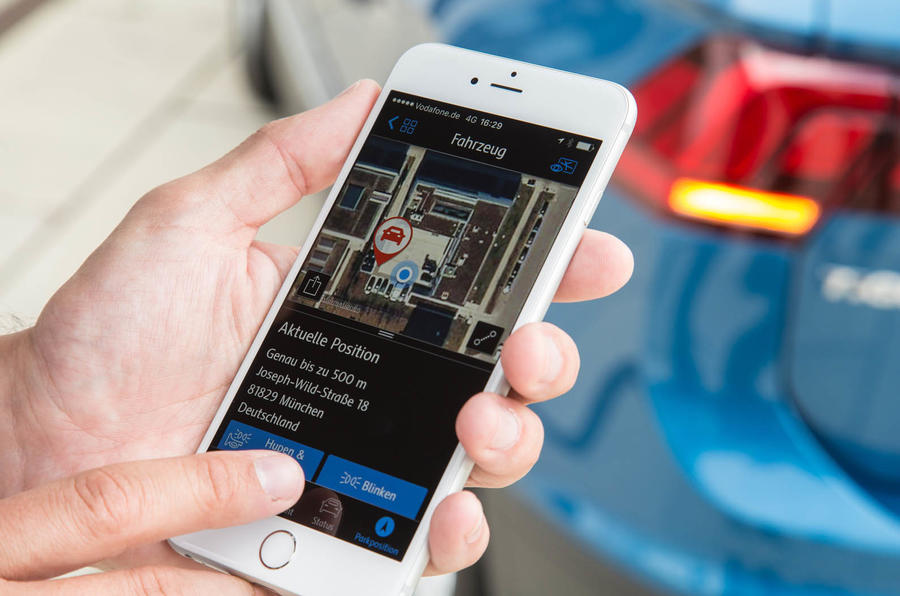 The system monitors the car’s servicing and repair needs, too, and can transmit these to the owner’s preferred dealer ahead of the work. You can also remotely interrogate the car’s trip computer and check that its windows are shut and the lights are off.

Rather creepily, it can tell you whether the car has entered a particular area or exceeded a speed that you would prefer it didn’t, by pre-programming the navigation. That might be useful for admonishing offspring guilty of visiting a dubious club, perhaps, the car alerting you via your smartphone, but it’s more likely to be useful to rental companies readying themselves for the car’s return to base.

This Tiguan's 237bhp and 367lb ft of torque convert fuel to motion effectively enough to see the speedo spear 62mph in 6.5sec before its slowing rotation halts at 142mph. A hard charge on a derestricted stretch of autobahn caused the DSG transmission to select seventh at an impressive 118mph (although 190km/h sounds more satisfyingly bold) and then settle at a reassuringly stable indicated cruise of 137mph, and climbing.

So it’s fast. But to feel that way during the ebb and flow of usual traffic, you’ll need to knock the gearlever into Sport, which somewhat lessens the effect of high gearing. But not enough to enable this Tiguan to get a shift on in the style that its subtly muscular, optional R-line dress implies. 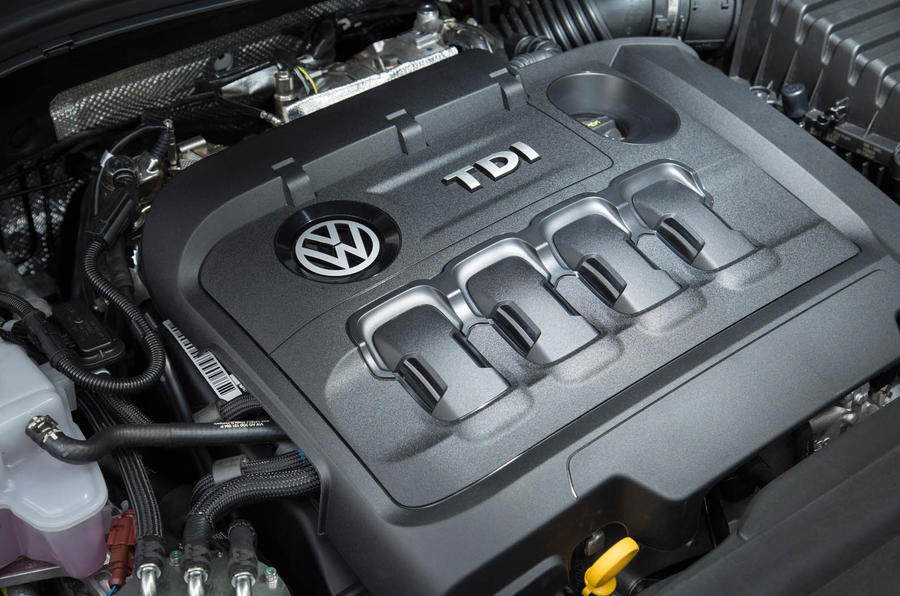 Given the injection pressures involved, this engine is pretty light on clatter, although there are less potent 2.0 diesels out there that pump more subtly. Refinement on this front is entirely acceptable, though. Slightly less impressive are the occasional stumbles of a DSG transmission whose gear-shuffling skills sometimes betray their shortcomings with a thump.

Still less pleasing is the Tiguan’s ride on optional 20in rims (19s are standard), which tackle under-tyre turbulence with the sophistication of a pedal car on pavé. These big wheels are very probably an option to avoid in Britain. Still, they deliver plenty of grip, allowing the Tiguan to corner with unobtrusive confidence. For keen drivers, though, that unobtrusiveness will border on the dull.

In other directions, the Tiguan impresses with vitals that include construction quality, roominess, convenience and detail finish, although you wouldn’t call its design inspirational, inside or out. That, of course, is what a lot of VW buyers like, this being a soberly designed machine that will serve few surprises, and plenty of satisfaction.

This top-end Tiguan delivers plenty of power for its price, better than average economy and all the rational features you’d expect of a VW, all in a tastefully high-quality wrapping. The sportier R-line styling looks good, too, but keen drivers should not expect a sporty drive despite this engine’s substantial grunt.

Much better to spend less on a Tiguan if it’s a classily functional SUV that you’re after, or to look beyond it for driver enjoyment.

Or you'd never fit the badge on the back ' Tiguan 2.0 BiTDI 240 R-line 4Motion DSG ' really ... marketing departments need a slap! Just a verbal one you understand ... not advocating violence!
michael knight 30 July 2016

What an apt, pithy and accurate description. Full fat - potentially dangerous to health. Diesel - actually dangerous to your health. If this engine gives only 20s to 30s to the gallon what is the point at all? Nasty sounding, dirty and dangerous. Ban it now.
View all comments (8)