The seven-seat version of Volkswagen's mid-sized SUV, the Volkswagen Tiguan Allspace, has now had a mid-life update in line with the regular five-seater, and this is our first chance to drive the refreshed version on UK roads.

The Allspace gets 110mm of extra length in the wheelbase, and seven seats as standard in the UK. It has a revised range of engines, with two 2.0-litre four-cylinder diesels remaining alongside three petrols, in a market where, even among family workhorse options, the diesels continue to dwindle.

The Tiguan’s derivative line-up has been simplified slightly so that there are now Life, Elegance and sporty R-Line models to choose from - and while the Life models are an entry-level grade, the other two are priced broadly similarly to each other. A seven-speed dual-clutch gearbox is either a de facto cost option or standard fit on every engine in the range, with part-time 4Motion four-wheel drive available with every engine except the 1.5-litre TSI petrol. 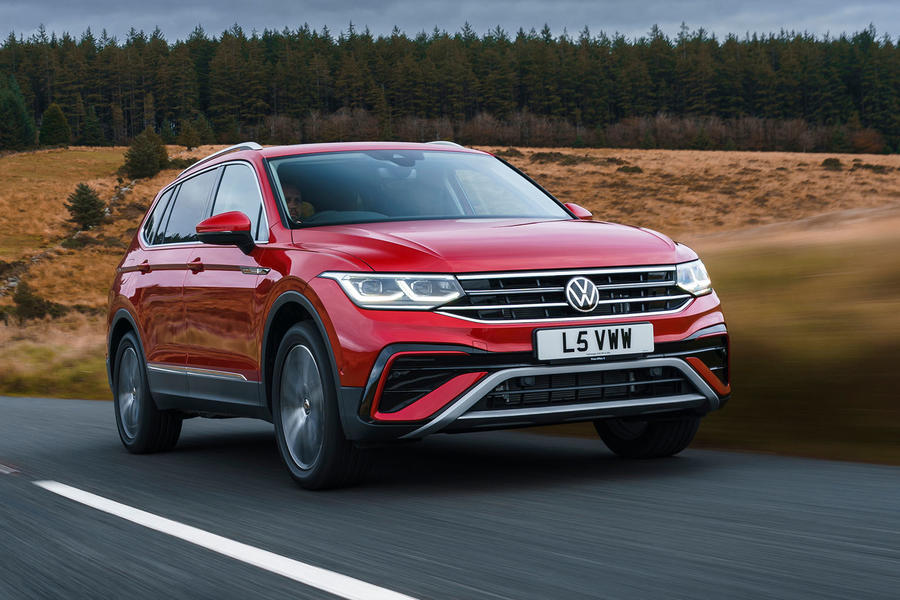 The Tiguan’s mid-life refresh is mostly about new assistance and infotainment technology, although there is a new radiator grille with the obligatory illuminated light bar just in case ‘cool dad’ from that memorable TV advert was at risk of feeling left out. There are new adaptive matrix LED headlights (which have special illumination modes for use on the motorway, in urban areas and in bad weather) and updated traffic jam assist and blindspot monitoring systems for upper-trim cars as well, although none was fitted on our entry-level diesel Life test car.

As regards secondary controls, the Tiguan’s layout has changed slightly, retaining good usability in key areas, but losing some in others. There’s an updated, better-networked 8.0in touchscreen infotainment system - thankfully, not the same system that the Golf Mk8 uses, but one with permanent menu shortcuts buttons and physical volume and zoom/tune knobs. And there’s a new heating and ventilation control console that swaps easily grabbable temperature and blower control buttons and knobs for touch-sensitive slider controls. Sure enough, they demand more of your attention to use than the old controls when you probably ought to be looking at the road.

Generally, though, the Tiguan Allspace’s interior is a smart and convincing one, albeit quite Volkswagen-typical conserative in its presentation. There are some neat extra storage features around the cabin of the kind that MPVs of a similar size used to specialise in: a lidded cubby on the dash top, and lined drawers that appear from underneath the front seats, should you want somewhere to keep wallets, handbags and electrical devices out of sight.

The second-row seats slide fore and aft and would have offered enough space for taller adults as well as kids if not for our test car’s optional panoramic sunroof. The third-row seats aren’t as easy to access as in some rivals, are fit for younger kids only and don’t feature Isofix child-seat anchorages. They’re easy to fold up and down, though, and smaller passengers on booster seats could travel in them happily.

To drive, the cheapest diesel Tiguan Allspace has more than adequate performance, drivability and refinement; medium-light but fairly precise and easily managed controls; tidy handling manners; and a medium-firm ride that feels ready for a bit of heavy hauling and towing if necessary, but not sporty or annoying with it. The car has a slightly more middle-of-the-road dynamic character than the Tiguan had in its original-model-generation early years, when the car’s slightly boundingly firm ride earned it the nickname ‘Tigger’ at Autocar HQ. On balance, though, the new car’s gently stout and steady blend of ride composure and body control probably means more has been gained than lost.

The engine has the slightly coarse, rev-reluctant, hard-working character you’d expect of a four-cylinder diesel, but it’s no chore to interact- or rub along with. It moves the car along briskly enough when you need it to, and it doesn’t struggle to top an indicated 50mpg out of town.

The Tiguan’s standard-fit driver assistance systems are also worth a mention, since the lane keeping system is less intrusive than rival systems; it’s easier to deactivate than some if it is getting on your nerves; and because, rather than continually tweaking at the steering, it will give you a discreet warning message through the digital instrument screen if you’re continually wandering across your lane. That, it seems to this tester, ought to be a much more effective way of getting drivers to pay a bit more attention to where they are pointing the car than continually seeking to correct their line in a more discreet way that’s actually just as likely to hinder as help. 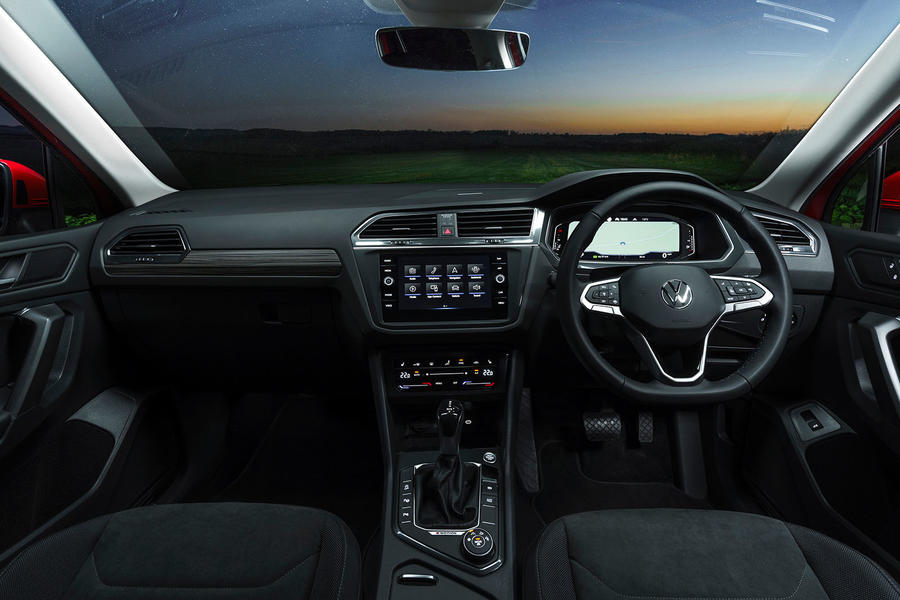 While the regular five-seat Tiguan does offer one, there’s no plug-in hybrid powertrain on offer in the seven-seat Tiguan Allspace for those seeking to make an efficiency saving; but if you're looking for versatile, real-world fuel-efficient, reasonably priced family transport, you could do a great deal worse than to stick with this entry-level diesel version of the car.

It’s smart, simple, solid, functional, straightforward and easy to use: VW doing what it has always done well, in other words. 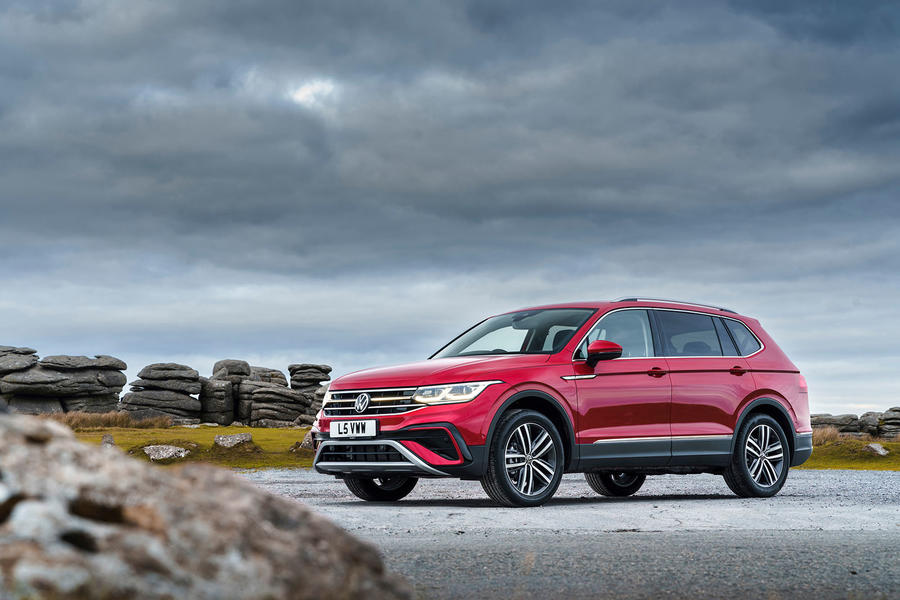 Just shows how far VW have fallen. Not only did the Kodiaq 'facelift' come to market many months in advance, it's also a better designed car. Look at the boot for instance - the VW floor arrangement looks like an after thought where as the Kodiaq is perfectly flat. As for their touchscreen heating controls? Why place a 'touchscreen' low down in the centre console? They use it for no other reason than it's cheaper to manufacture.

I used to buy VW and some years ago Audi, but I'm afraid both marques are being outgunned these days buy their cheaper cousin.