Subaru’s first European hybrid makes for not earth-shattering, but worthwhile, progress for the firm on the road, but also genuine 4x4 capability off it
Open gallery
Close

Given that Subaru prefers to define itself as an SUV brand these days, it’s strange that it should have been without what we might think of as a conventional family SUV, at least on European shores, for so long.

The Forester has been as close as the firm has come to making one (leaving aside the short-lived, US-built B9 Tribeca), but it’s only really been big enough to escape definition as a ‘crossover estate’ for a model generation or so. Moreover, after Subaru dropped its boxer diesel engine last year, it has spent a good portion of its life without the kind of powertrain it needs to do really well on this continent.

This year, however, the tables ought to turn in the Forester’s favour a bit when the fifth-generation of the car arrives because – just as European customers continue to clamour, for better or worse, to avoid buying diesel – it’ll be arriving with a petrol-electric hybrid powertrain which Subaru has branded the eBoxer. It’s a fairly mild hybrid application, if that word can be applied in a non-binary sense; though it can power the car in emissions-free running for short periods, it features a fairly small electric drive motor with only 16bhp and 48lb ft of torque, and also a small lithium-ion drive battery.

But being small also makes Subaru’s hybrid powertrain light: the whole setup, electric motor, battery, power electronics and all, only adds 110kg to any model (and it’s going in the current Subaru XV and, later, in the Impreza too). For that reason, but also because it’s been designed to drive into a reengineered version of the same CVT that other Subarus use, it doesn’t adversely affect either the utility or offroad capability of the Forester too much.

So, where other petrol-electric SUVs have greatly reduced capacity for towing, this one can manage almost 1800kg on a braked trailer - and, since it has the same asymmetrical four-wheel drive system as any other Subaru, it doesn’t effectively become a heavy, underpowered front-wheel drive field ornament when the battery runs out. 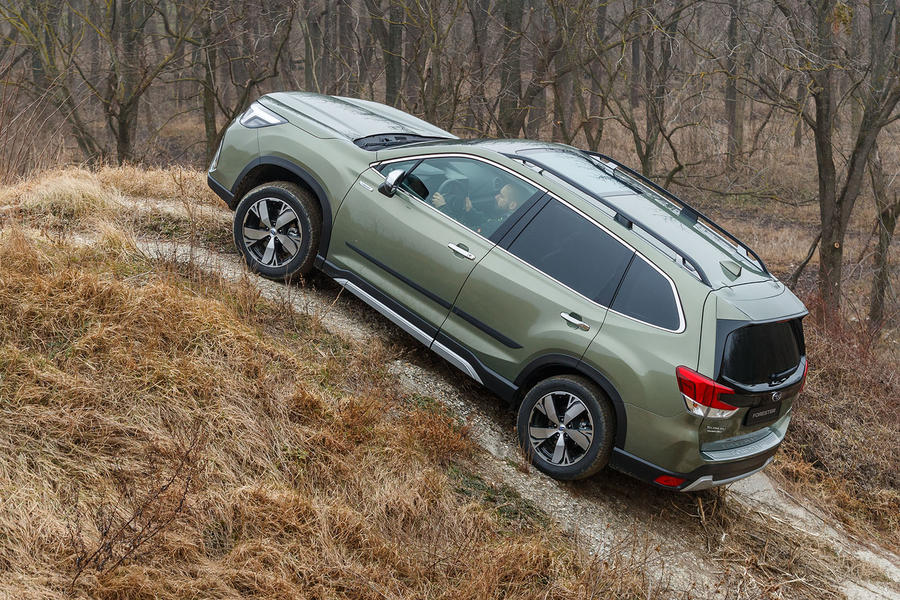 Ahead of the car’s official unveiling at the 2019 Geneva motor show, Subaru invited us for a short test drive in the new Forester conducted on a proving ground in Austria.

The fifth-generation Forester is a slightly longer, wider car than the outgoing one, and feels more spacious inside in most respects. The cabin makes a classier first impression than last Forester managed, too, with more enveloping, appealing-looking primary fittings and a few richer material touches.

The car’s hybrid drive system is hooked up to a revised version of Subaru’s FB20D 2.0-litre normally aspirated petrol flat four which, without the help of an electric motor, has often lacked the accessible torque to make for easy on-road drivability when combined with Subaru’s CVT gearbox in other cars. Here, however, the hybrid system’s electric motor provides a bit more instant pulling power, with the biggest improvement on part-throttle responsiveness evident when using the car’s ‘S’ driving mode.

It’s a shame Subaru doesn’t make it easier to keep the Forester running under electric power at low speeds; that's possible but you really do have to be delicate with the accelerator to manage it, and you have to be travelling below 25mph. It'd be helpful to have some kind of instrumentation or haptic feedback on the pedal, so you could identify the point at which you are about to trigger the petrol engine without going past it; but that's the kind of thing that comes to the makers of hybrid cars with practise. 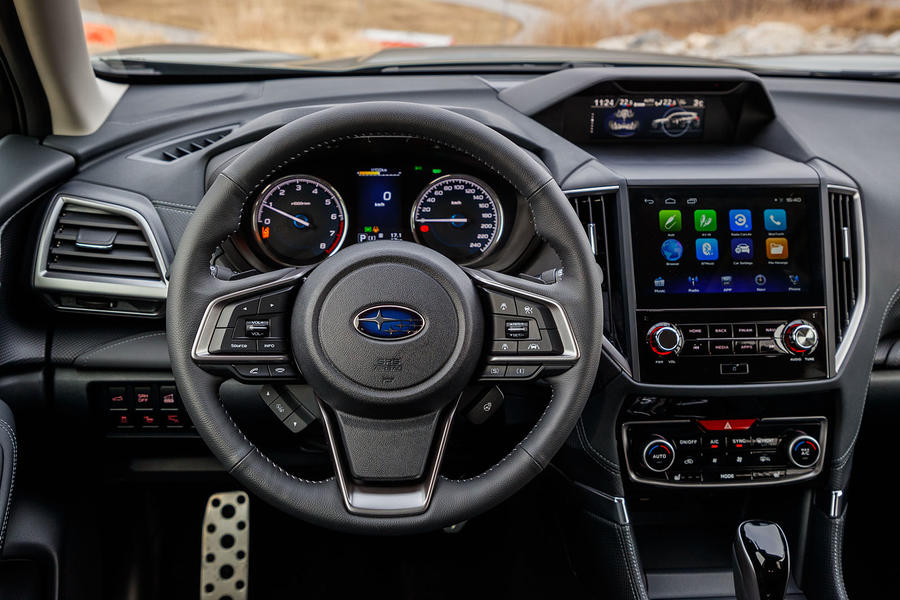 Get beyond about fifty per cent throttle in the Forester eBoxer and a little bit of roughness and shunt from the hybrid driveline materialises, particularly as the petrol engine takes the lead from the electric motor. When you want anything approaching full power, the familiar mix of steady apparent over-revving from the 2.0-litre flat four and slipping from the gearbox presents – and, as ever, the gearboxes’ manual mode isn’t entirely successful at mitigating the latter.

So, on the road at least, I suspect other hybrid SUVs would feel more responsive and slick to drive. Off the road, however, the Forester’s hybrid CVT drivetrain and mechanical four-wheel drive system make it easy to meter out just as much torque as you need to eke out traction or to climb or crawl.

Detailed on-road ride and handling impressions will have to wait until later, but on an admittedly smooth test track the Forester’s body seemed reasonably well-controlled for a car of its size, its steering linear and precise enough, and its ride quiet and absorbent.

Real-world fuel economy test will also have to come later - but don't expect too much on that score. Subaru's claim is that the eBoxer system makes for an eleven percent improvement to the city economy of a like-for-like 2.0-litre petrol model, and that open-road efficiency is only slightly better than it might be in that conventionally powered petrol alternative. 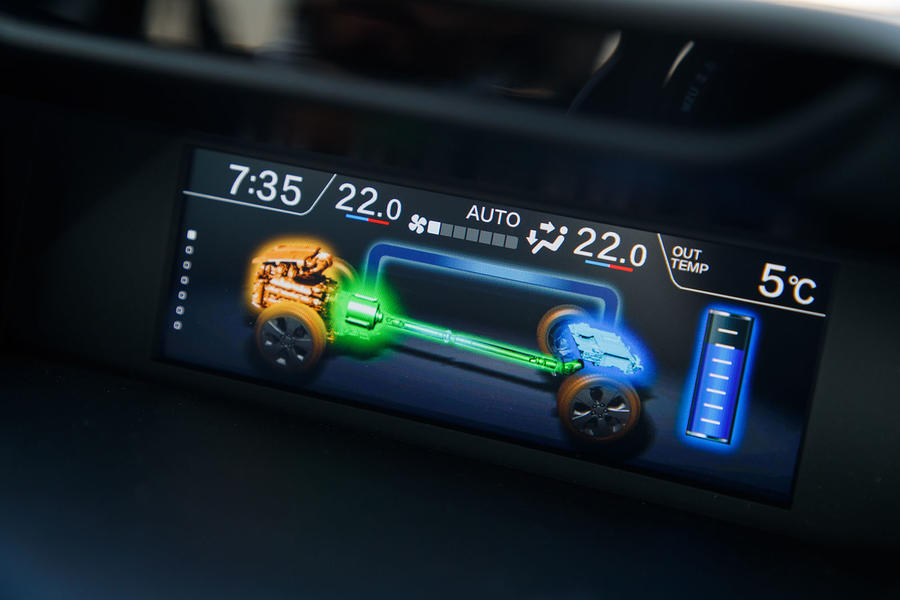 Subaru's eBoxer hybrid powertrain feels like a slightly tentative step towards electrification, but a vitally important one for Subaru. It’s unlikely to catapult the Forester up the sales chart the way that Mitsubishi’s PHEV powertrain transformed Outlander sales – but, while there are clearly a few creases still to iron out of it, it does feel like it belongs on a typically dependable, capable Subaru. And that, as with anything, feels like the right place for the firm to start.

If you want a family SUV to use almost entirely on the road, and the drivability and economy of a diesel are your bottom-line requirements, this may not be the hybrid SUV for you. But if you need the towing and four-wheel drive capability that were once considered key for SUV buyers but increasingly only remain so for a minority, the Forester eBoxer ought to be high on your shopping list.

This is a bit of a curious, unusual animal: an old-school, new-generation family 4x4 that uses fairly avant-garde technology to serve a time-honoured brief in an uncompromising but pragmatic way. Oddly, considering all of that, you might quite like its sense of simplicity. 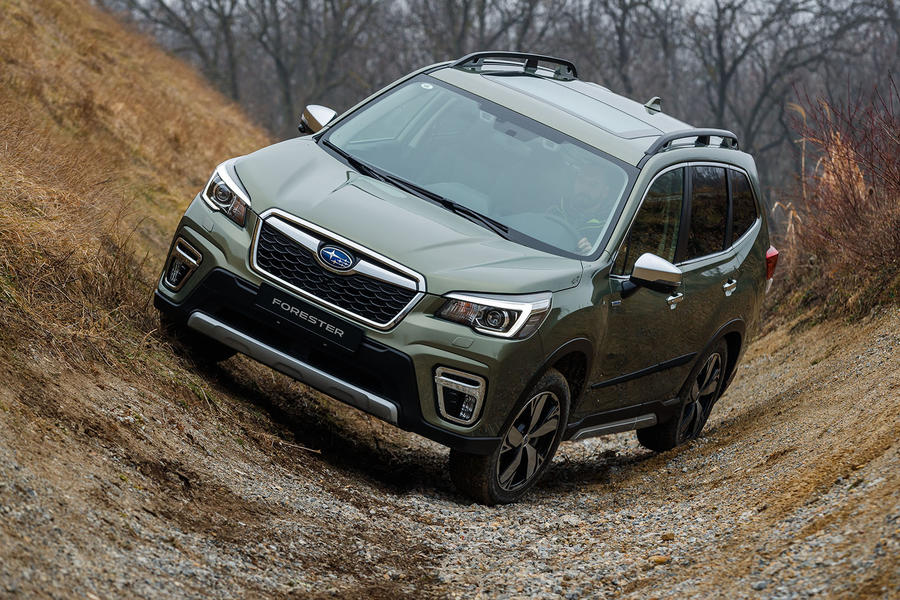 Thanks for sharing the information.

We deliver help and support for Hulu app, especially when it comes to Hulu activation process. If you want to perform Hulu setup on your streaming device, then you must know how to do Hulu com activate.