From £85,5768
Aside from its looks, the 911 Targa has always struggled to stand out against its rangemates. Now, there’s a new one. We put it to the test in the UK for the first time
Open gallery
Close

As much as it has been seen as something of a ‘poser’s Porsche’ over the years - one that’s never really been taken quite as seriously as its coupe sibling - the 911 Targa hasn’t been without its share of fans who wouldn’t identify as your typical boulevard show-boats. Although they might only admit it in hushed, quiet voices, there are some fairly serious drivers out there - a few of them are colleagues - who actually quite fancy the idea of a Targa-topped 911.

You can certainly see why. I mean, just look at it; what isn’t there to like about the way it manages to maintain practically all of the coupe’s iconic silhouette, despite the fact there’s a fairly large stretch of roof missing? Even though the full-fat cabriolet is now more handsome than ever, its overall shape still doesn’t match this new 992-generation Targa for sheer visual appeal. It really is quite a fantastic looking car.

But as much as the Targa’s dashing appearance might have endeared it to testers and driving enthusiasts alike over the years, that fact alone has never been enough to see it rise to the top of the “base” 911 tree. Compromised rigidity, greater weight (the Targa has historically been the porkiest 911 variant), and a higher centre of mass over the rear axle have all served to blunt its dynamic edge somewhat over the years.

And although Porsche might have really put the work in to narrow that gap between the coupe and its drop-top range mates over the years, as a roofless 911 the Targa has struggled to really showcase exactly what it offers over and above the fractionally lighter Cabriolet. Aside from its more appealing looks, that is. So we’re back at the poser question, it seems. I guess we’re just going to have to accept there is a degree of truth to it.

Anyway, there are two different 911 Targa models available: the base Targa 4, and the more powerful Targa 4S tested here in left-hand-drive guise. So four-wheel-drive is standard across the Targa range, then, as has been the case since the 997-generation Targa was launched back in 2006. For the 992 Targa 4, power comes from Porsche’s 3.0-litre twin-turbocharged flat-six, which develops a healthy 380bhp and 332lb ft. In the 4S, these figures are upped to 444bhp at 6500rpm and 391lb ft between 2300-5000rpm, which allow this 1675kg sports car to sprint from 0-62mph in 3.8sec and max out at 189mph.

The £98,170 Targa 4 is available exclusively with Porsche’s excellent 8-speed PDK. Meanwhile, the 4S can be had with either the PDK, or with a seven-speed manual ‘box. Regardless of transmission, both models are priced at £109,725, though it’s worth pointing out that manual cars also feature Porsche’s Sport Chrono package as standard. Our test car came with the PDK transmission, and the Sport Chrono package.

Elsewhere, both cars get Porsche’s Active Suspension Management adaptive dampers, as well as Porsche Traction Management. The 4S, meanwhile, comes with the Porsche Torque Vectoring Plus electronically-controlled rear differential as standard, while in 4S manual models this is swapped for a PTV mechanical rear diff’. As for the roof, that can be retracted in 19 seconds - but you have to be stationary for it to work. 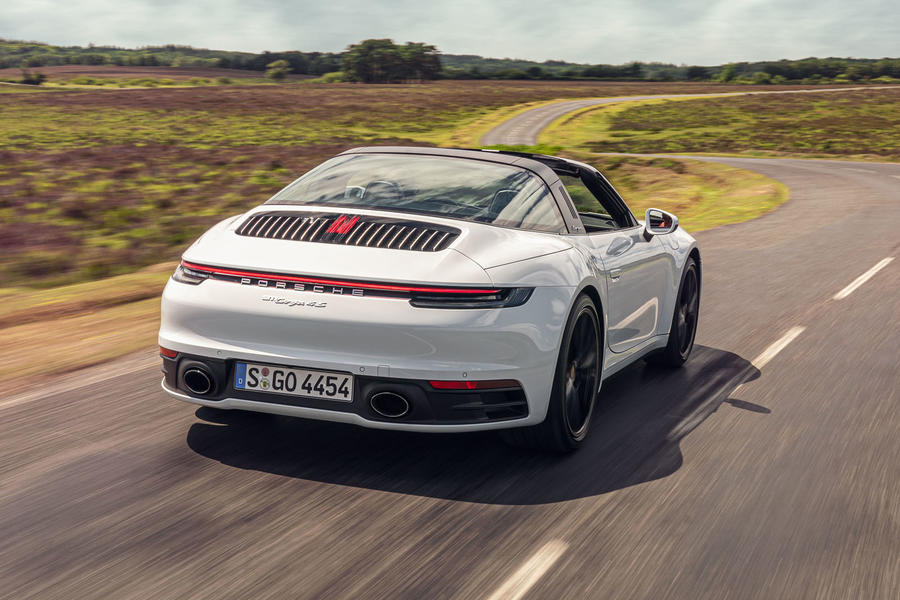 Porsche GB has a tendency to specify the majority of the 911s on its press fleet with the optional 10mm ride height drop, so it was interesting to find this German-spec test car came without. In any case, on reasonably well-kept A-roads and motorways, the differences in ride comfort between the two set-ups isn’t exactly day and night - something that was confirmed by a follow-up drive in a lowered, rear-driven Carrera S later the same day.

In these environments, the Targa rides with plenty of purpose, but isn’t so firm that that you’d think twice about using it as more of a long-legged GT - something plenty of Targa owners will no doubt have done over the years. Coupled with the 911’s fantastic driving position and excellent visibility front and rear, it is a sports car in which you could quite happily endure big-mile schleps. With the roof in place isolation is okay, but in typical 911 fashion there is a large amount of road roar that’s generated by its fat 305-section rear tyres, which themselves are wrapped around 21in alloys. More than anything else, it’s that persistent white noise that would likely prove draining when covering big miles.

It’s on the narrower, bumpier and generally more exciting stretches of back road where those subtle differences in suspension set-up begin to present themselves. With the PASM dampers set to their softer setting, the Targa doesn’t feel quite as tied down as the Carrera does over fast crests, while there’s a natch more pliancy about the manner in which it irons out any dips in the road. Roll is a touch more pronounced through the corners too, but with pretty immense four-wheel traction and a beautifully weighted, supremely accurate steering rack at its disposal, the Targa remains a seriously quick, effective road car.

Sure, on track the rear-driven Carrera S would be better. It’s that much tighter, that much more focused than the Targa. On the road it feels like a more exciting, expressive machine too; it turns in with so much more enthusiasm, and its rear end can be felt gently shimmying around behind you as you push through corners. But the balance between body control and ride comfort that the slightly softer, heavier Targa 4S nonetheless strikes is still pretty appealing - particularly when you factor in its ability to retract its roof and properly expose you to the sights, sounds and smells of whatever environment you happen to be driving in.

That being said, with the roof down I’m not sure you’re quite as exposed to the 911’s engine note as you might expect to be. At anything other than full throttle, it can actually be tricky to make its serrated growl out over and above the wind that booms around the cabin, and echoes in the recess that’s directly over your shoulder. Given the fact that an overly-serious nature is one of the key criticisms that we’ve levelled at the 992 generation 911, this slightly hampered sense of aural theatre is a bit disappointing.

But even though that iconic flat-six soundtrack might be hampered by the brace of turbochargers that all regular 911s now wear, this latest 3.0-litre motor remains an impressive power plant. Throttle response is near as instantaneous as you’d like, and acceleration remains as characteristically linear and constant as ever. The PDK gearbox, meanwhile, is a masterclass; effortlessly quick-witted and intuitive when left to its own devices, and impeccably responsive when operated via the paddles on the steering wheel. 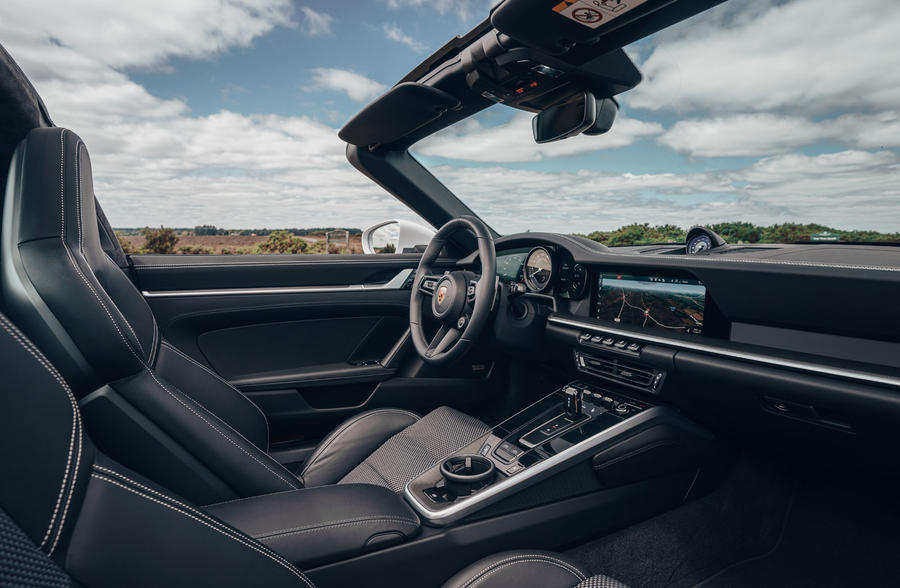 That really depends how keen you are on the idea of an open-top 911. The rear-driven coupe is the better driver’s car, no doubt about it. And by that logic the rear-driven Carrera S Cabriolet is probably the more engaging option to go without a roof. It’s also just under £5600 cheaper than the 4S Targa, which isn’t an insignificant sum even at this price point.

But if the fastest, all-paw convertible is what you’re after, then I can see why you’d opt for the Targa over the traditional convertible. It costs the same as the 4S Cabriolet, looks better, and although it might be 50kg heavier, on the road I’m not sure you’d end up spending all of your wheel time stressing about that fact.

Sure, there might still be a good deal of poser appeal attached to the Targa 4S. But there’s more driver appeal to go along with that than ever before, too. 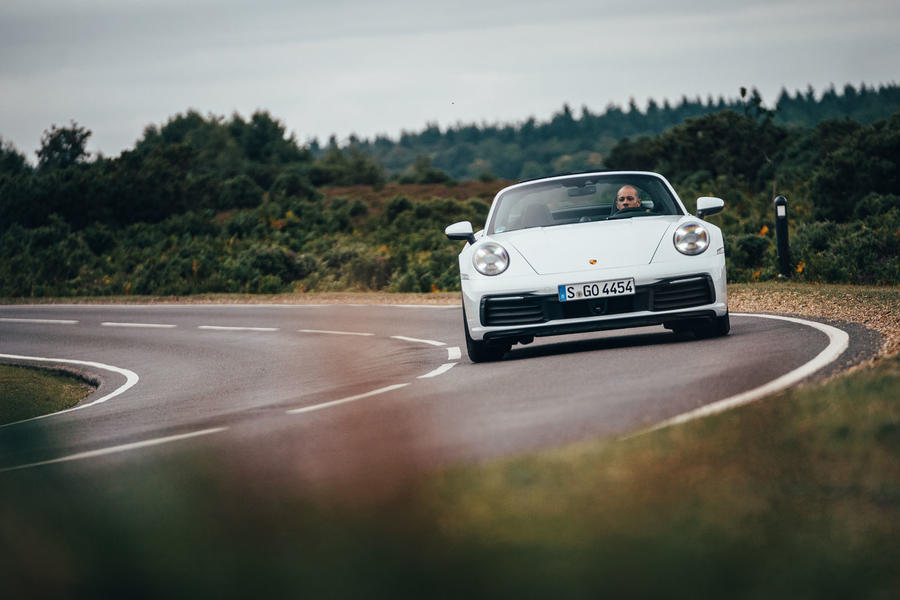 The Targa has always been my favourite and this one looks fab! Especially in

Four star because it's not the hard top

Dear Autocar,
Just because the hard top is a better drivers car, don't mark down the Targa. If anything, mark up the hard top to five star +
The star ratings needs reviewing. EG. If Porsche didn't build a hard top, would Autocar still have given the Targa just four stars?
Boris9119 11 August 2020

Some truth there Deputy, whether a targa is a little less tight or taught than a Carrera S is not the point as you say. Most buyers at this price point and in this niche understand what they are buying. Not everyone wants a GT3.