From £85,5769
GTS is an understudy to the Turbo rather than the GT3 and, as such, it makes an excellent case for itself
Open gallery
Close

Less than a month after driving the new Porsche 911 GTS in Italy, we’ve had the chance to sample one of the first right-hand-drive versions to reach the UK: an all-wheel-drive Carrera 4 GTS Coupé, experienced on the challenging moorland roads around Weardale in County Durham.

The new GTS is closer to a model family than a trim level, with the choice of Coupé, Cabriolet and Targa bodyshells and a multitude of potential dynamic options. But the biggest quandary for British buyers is likely to be over the number of driven wheels. Choosing the Carrera 4 GTS over the rear-driven GTS requires an extra £5580 and brings around 50kg of additional mass but it also carries the promise of better traction in slippery conditions. Such as those I found on my test drive.

Other items from the dynamic smorgasbord of options fitted to our test car included rear-axle steering, PCCB carbon brakes and the speed-sensitive Power Steering Plus, but it didn’t have the roll-fighting PDCC dynamic chassis system. 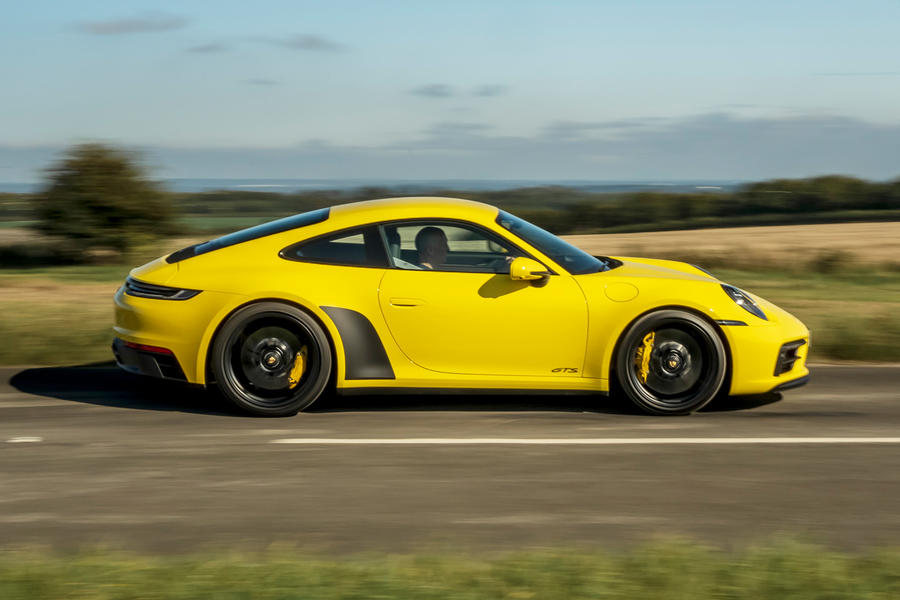 Porsche says the GTS’s chassis components and settings are close to those of the Turbo S and it felt noticeably firmer than the regular Carrera and Carrera S over challenging roads. Stability and traction were both impressive, even when rain tried to stop play.

However, GTS drivers may spend a lot of their time travelling over choppy Tarmac searching for the optimal setting for the PASM adaptive dampers. On the bumpy (but supremely well-sighted) B6278 from Eggleston to Stanhope – one of the sternest tests of chassis manners in England – Normal mode struggled to digest high-frequency corrugation, the front of the car growing light as speeds rose. Selecting Sport imposed iron discipline, but at the cost of a forceful lower-back pummelling through the seat base.

Beyond mild discomfort, though, the Carrera 4 GTS proved hugely impressive at delivering its turbocharged urge to pretty much any road surface. The GTS’s 3.0-litre flat six is well short of the Turbo on poke – its 473bhp is just 29bhp up on the Carrera S – but the ability to deploy this is much more important than the number itself, especially given the GTS’s low-down torque and the scintillating reactions of the test car’s eight-speed PDK gearbox.

It sounds good when revved out, a louder exhaust tune giving a more purposeful voice than in the standard Carrera, but it needn’t be thrashed to deliver serious performance.

The GTS feels agile and svelte on a tight-fitting road, easy to place and loyal to a chosen line, with steering that stays accurate as speeds and loadings rise. As with every 911, small inputs yield immediate reactions, fractional changes in throttle position widening or tightening cornering attitude. Mechanical grip is huge, but the chance to experience some tight, wet, bumpy corners proved that when the rear Pirelli P Zeros do let go, they do so abruptly.

Loss of traction was also the only time the car felt obviously all-wheel driven, with torque aggressively diverted forwards as the quick- acting transmission tried to pull the car straight. And while Porsche’s carbon-ceramic brakes always feel over-spec for road use, they behaved impeccably under gentle loadings. 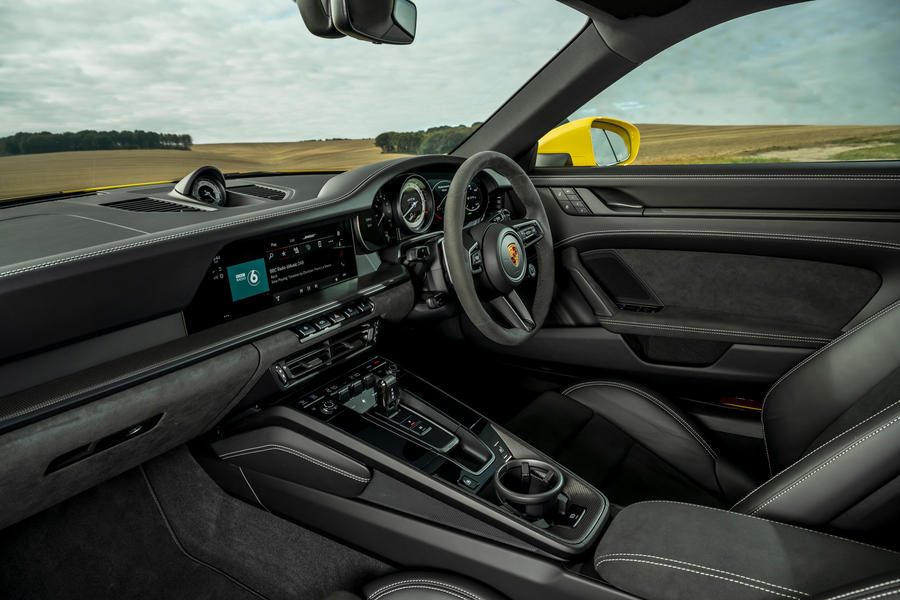 The GTS is definitely a Carrera-plus rather than a junior GT3, a point I confirmed by driving over the same roads in the GT3, whose responses and soundtrack remain on a higher, ethereal plane. Yet a well-chosen GTS feels like a particularly sweet spot within the 911 clan, especially given its ability to make use of an impressively high percentage of its dynamic talents in the real world. 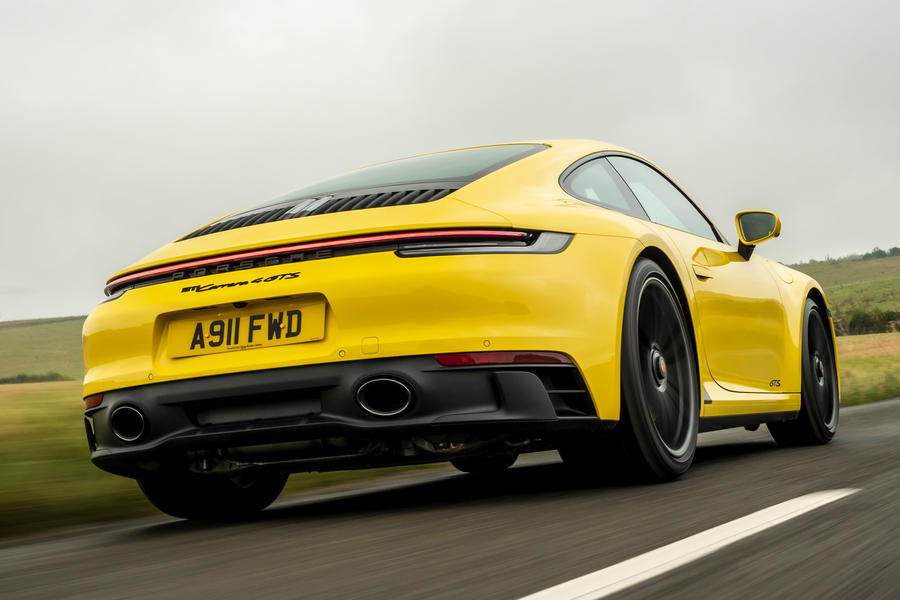 Log in or register to post comments
Just Saying 24 October 2021
Apparently the best time to enjoy these wonderful cars is between 5 and 6 am June/July. Obviously this is just what I've heard.
si73 23 October 2021
I've always considered the base Carrera to be all the 911 you need, though I've only ever driven faster more powerful variants, on performance car driving days, it's always been a standard car that I've coveted, unfortunately they will always be beyond my means but I do love them, preferably earlier ones as the latest seems too big.
Regarding all the comments on too much performance, I can understand as I have a lot of fun in my 130bhp eunos na, and all that fun can be had within the speed limit. But I'd still have a 911 if I could, but not this GTS.
MarkII 23 October 2021
Full Disclosure: I'm a Porsche fan and genuine 911 owner and have owned many fast cars. Whilst it's true that any of the modern 911's is more than fast enough for the road and 3rd is the highest gear you can ever use in anger. I find the other comments woefully ill-informed.
The latest Carbon Ceramic brakes are not 'overly powerful', you don't have to be a 'racing driver' to stay out of the bushes and any modern 911 (from the 993 onwards) is easy to drive fast, if you drive well (slow in, fast out).
It's true that ride & composure can occasionally be found wanting on our bumpy, pot-holed roads but it's no worse than a stiffly sprung hot-hatch and the Pirelli's letting go abruptly is typical of the brand - swap to Michelin PS4S and there's no issue.
As regards the new 992 GTS, it's a fine Sports car and one of the best all-round but I'm so happy with my naturally aspirated 991.1 C4S, it's planted 4WD handling (on Michelins) and the engine's howl at 7,000+ rpm, that for the money, nothing else comes close. If I were in the market for a new one, I'd look at the GTS but the one true comment below, is that a base Carrera 2/4 can be all you'll ever need, because they're that good. Ignore the naysayers.
View all comments (6)