From £85,5769
Share review
Once again, less is more for the Porsche 911, which is now available in its most basic form
Open gallery
Close

Think of a Porsche 911. Not any 911. One that's twin-turbocharged and rear driven, with huge tyres. One that'll sprint to 62mph in a shade over four seconds and flat-out will see the far side of 180mph.

Some of you will now be thinking about the 993 GT2, but you could just as well have the new 911 Carrera in your mind's eye. That's the new and very much entry-level 911 Carrera. It's an extraordinary thing: the performance of a pulverising homologation special built as recently as the mid-1990s can now be matched by the most junior member of the family.

In fact if you option the Sport Chrono package, it'll drop the new car's sprint time to four seconds dead, against 4.4sec for the 'classic' GT2, but that only serves to strengthen the point. The two cars also share a very similar contact patch, though in 2019 the Carrera's 295-section rear tyres class as fairly modest, whereas in 1995 the 285-sections on the GT2 were almost grotesque by the standards of road-going Porsches.

The only major difference is that back then you needed to spend the equivalent of £173,000 to get such epic performance from a 911. Today it costs half that. Admittedly the GT2 also tipped the scales at less than 1300kg – some 210kg shy of its descendent, even though the new car benefits from aluminium body panels. There's still work to be done on that score.

So, the new 911 Carrera: non-S, non-4WD, non-Cabriolet, but driven here with an eight-speed dual-clutch gearbox instead of the seven-speed manual that'll arrive in due course. This isn't quite ground zero for the contemporary 911, but it's close.

The engine is the same rear-mounted 3.0-litre flat-six found in the S, though detuned with smaller turbochargers to deliver 380bhp at 4500rpm instead of 444bhp. Torque is also down, from 391lb ft at 2300rpm to 332lb ft from 1950rpm, although the knock-on effect of that seems slight: in kickdown the Carrera S bludgeons 50-70mph in a claimed 2.2sec whereas the plain old Carrera takes only 2.6sec. I'm certain many owners wouldn't notice the difference. Perhaps some road testers, too.

Elsewhere the Carrera gets smaller brake discs than the S, and while it's possible to specify many of the optional extras available further up the range (our test car uses carbon-ceramic brakes), two notably aren't made available at all. How much might Carrera owners miss rear-wheel steering and the 10mm drop in ride-height that comes with the PASM Sport suspension package? We'll see.

With no extras whatsoever, the Carrera costs £82,793, making it some £10,000 less expensive than the Carrera S. I should add that this test car costs considerably more than basic, thanks to extras such as a nose-lift system, sports exhaust, and the Sport Chrono Package mentioned a moment ago, which includes the dynamic engine mounts. The car also has the optional 90-litre fuel tank. This should, if the 40mpg touring economy recorded by the Carrera S Autocar road-tested earlier this year is anything to go by, yield an almost unbelievable motorway range of 800 miles.

Inside it's much the same ambience as with the Carrera S, with the same 10.9in touchscreen and wrap-around 7in digital screens in the instrument binnacle. For the purists this place will take some getting used to, but one press car on the launch event offset the progressive ambience with Truffle brown leather and 'Paldao' wood inserts. A true delight. 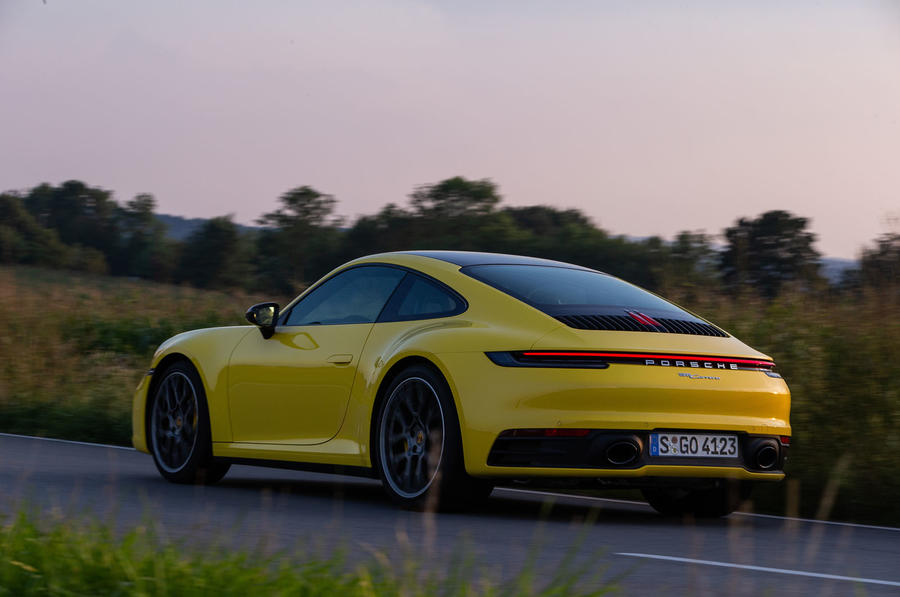 In the past the most basic 911 has often been among the very sweetest to drive. Smaller wheels, narrower hips and softer suspension. These elements made them easier to place on the road and even more expressive in their handling, at least at realistic speeds.

Which is why you should temper your expectations of the new 911 Carrera. These days it gets the wider body previously reserved only for S-badged variants. That and, having grown by 46mm, the front track width somehow now matches that of the outgoing GT3. Our test car also rides on optional 20in wheels at the front with the full 21in cartwheels at the back. The standard items – an inch smaller at each end – are hardly subtle, but these are concept car-sized.

It means the 911 is now a large car, and this particular example has a very serious wheel-and-tyre package with which to dominate the road beneath it.

It’s equally serious in the engine bay, not only because 380bhp is still a hell of a lot even in 2019, but also because the compressor wheels in the symmetrical turbochargers are smaller. That’s not a typo. They deliver 300 millibars less boost pressure than those in the Carrera S but spool up even quicker, which practically eliminates lag and sharpens throttle response. With so much power and torque already at their disposal, that looks like a decent trade for the Carrera owner.

It means pick-up – which is occasionally accompanied by a faint metallic yowl reminiscent of old 911s – is therefore comparable to a naturally aspirated engine with a heavy flywheel, the intake tract gasping only momentarily before torque reaches the rear wheels. This new 3.0-litre is phenomenally responsive. The way it then spins to the 7500rpm red line is then somehow both thick-set and light-footed, but above all it’s relentless. The PDK gearbox also remains outstanding: shifts are cut-throat quick but effortlessly smooth, with just a little bite to them.

In short, the powertrain is excellent, and raw pace aside, more enjoyable than that of the Carrera S. What a coup.

Thing is, you might not realise quite how fast you’re travelling. These tyres develop a ton a grip but the stability of this chassis and the 992 cabin's impressive isolation from wind and engine noise disguises how hard they’re working. Worringly, you can slip into triple figures without really noticing. Again, not a typo.

But this is the way of the modern 911. Considering almost two thirds of the mass lurks behind the driver, the Carrera S and this Carrera are freakishly composed. Even to the point of seeming inert. Porsche's decision to go with a staggered wheel set-up – larger at the rear – has had the desired effect of pushing the car's balance point forward, and wherever you point the neat little 360mm-diameter steering wheel, the car simply goes, and goes effortlessly. Is the steering a touch heavy? Maybe, but that doesn't translate into slow responses, and anyway it's an intuitively geared rack.

So what's new? Because in all these respects the basic Carrera is just as impressive as every other 992-generation we've so far tested. Accurate, neutral, phenomenally quick.

What's new is that the entry-level 911 doesn’t take itself as seriously as its siblings. The standard ride-height makes it appear a little perched at standstill, at least compared to cars equipped with PASM Sport suspension (which, in terms of global stock, is most of them), but the more generous travel introduces some extra fluidity into the body movements once you're on the move.

And if you want to interact with your 911 at real-world speeds, that's invaluable, because the difference is clear to see – or in this case, feel. The suspension breathes more freely and that unlocks some personality by allowing the car's natural weight distribution to come to the fore a little. The terms ‘oversteer’ and ‘understeer’ are largely anathematic to this generation of 911 – even one driven with reasonable commitment – but what the basic Carrera does so well is to hint at those kinds of movements as it transitions through corners. And rear-wheel steering? Didn't miss it, though it does make a very agile car more nimble still, and lightning fast through second-gear hairpins. Personal preference.

You can, of course, goad the car into oversteer by leaning on the front axle through slower corners. It simply doesn't stop gripping, and eventually the rear relents and starts to slip onto a wider line. The movement can be sudden but it's never ragged, because the body control is still so sensationally good, despite the softer suspension set-up. Five miles in a standard Carrera and you'll wonder why anyone would want it any stiffer. Past experience tells us the 992 can get a bit floaty on seriously challenging roads – the sort you'd find in Wales – but with the dampers left in their default setting, as far as lateral control is concerned the Carrera strikes a sublime compromise. You could always take them up a notch in Sport Plus mode, too.

I can't speak for overall ride quality because our German route was beautifully surfaced, and unsurprisingly the Porsche rode them with the sort of grace you'd expect of a long-distance GT. Once the car arrives in the UK we'll test one with the smaller, standard-fit wheels to see how well this characteristic translates onto more broken roads. 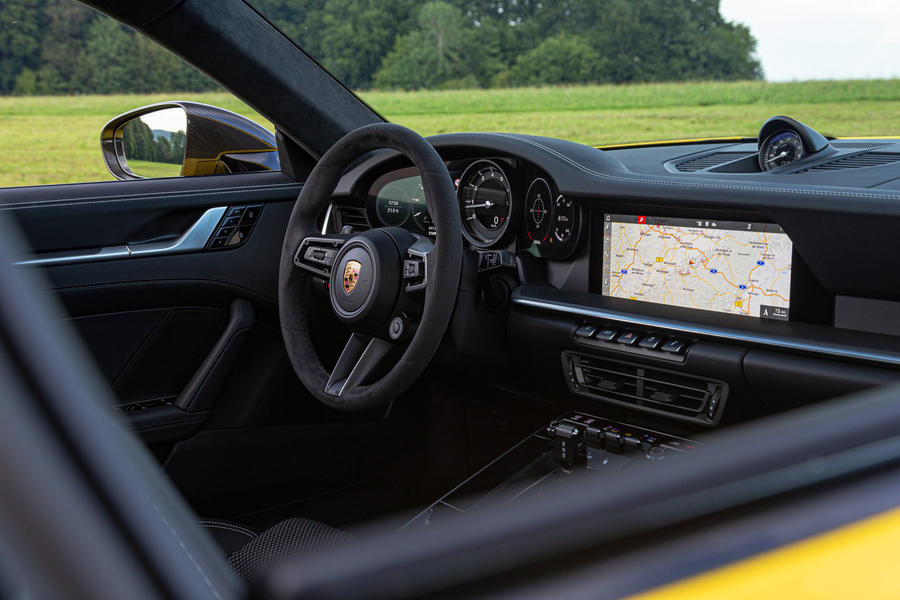 If the last generation of 911 is anything to go by, the Carrera S will outsell the Carrera and the Carrera GTS will do better than either when it arrives a year or two from now. Because unlike the people who buy the 718 Boxster and Cayman, who mainly opt for plainer variants simply to get on the first rung of the Porsche ownership ladder, 911 owners tend to spend fairly big. And the more expensive the model, the more they spend on options.

After driving the basic Carrera, I'm not convinced that's the right approach. Admittedly, with its new wide-body curves, the car feels uncomfortably butch on many roads. On the flip-side, if you've always liked the 911 with added presence, no longer do you need to pay a premium for the Carrera S. And at no point on some very quick, open, flowing roads does the less powerful car's 380bhp feel underwhelming. Not even for a second. If anything, it means the car lingers a little longer on the straights, the tacho needle reaching greater heights than it otherwise might.

Supple, uncomplicated to drive, but at its core still a deadly serious sports car, this least expensive Carrera is the best of the bunch to drive at eight or nine tenths. And if you're going any harder than that, you're probably on track and what you really want is a GT3. Or a 993 GT2. 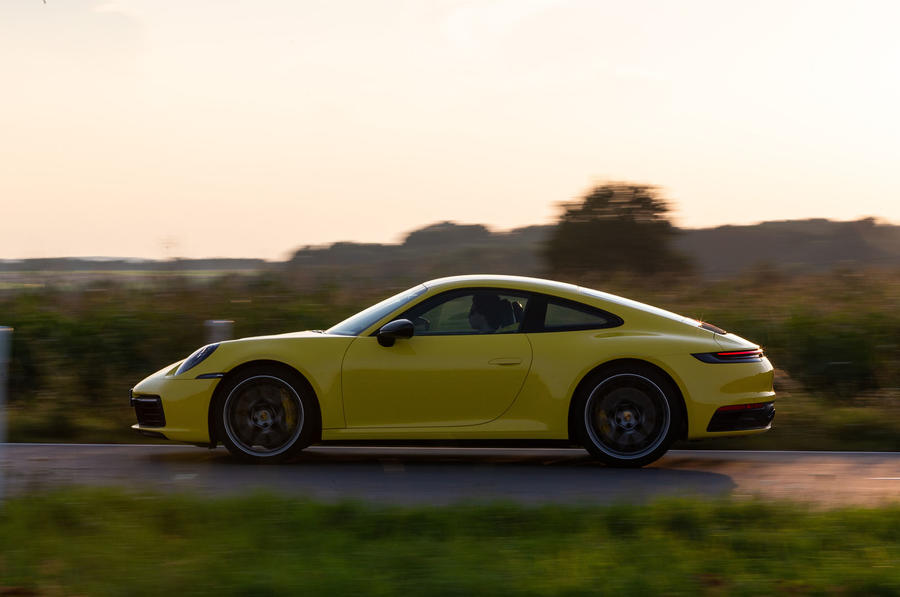 They are really wide nowaday, no point saying it is an optical illusion. You can't fit 2295/305/325 section tyres on a car in 2019 without it being wider as well, compared to narrow tyred shod Porsches of old.