9
Share review
Feels like a more mainstream car than the last, until you find the right road and discover it’s as special as ever.
Share
Open gallery
Close

It is a measure of the way the wizards of Weissach go about their work that this new GT4 is not the quickest Cayman on sale. Despite its new 4.0-litre engine, despite it being the first mid-engined Porsche to offer more than 400bhp (Carrera GT and 918 Spyder hypercars aside), if you look at the numbers you’ll discover that, thanks to offering more torque lower down and offering the option of a paddle-shift transmission, a humble GTS can be configured to be quicker to 62mph and no slower to 100mph. Criticised though they are, you can’t say those turbo motors are entirely without merit.

But a Porsche GT car has never been about the numbers, and this one is no different. The Motorsport department that makes these cars recognises ‘fast’ as a mere component of ‘fun’, and that speed comes in more than just straight lines. If they simply wanted this car to be quick, they could have easily wrung more power out of the 2.5 turbo four than offered by this normally aspirated 4-litre six, kept the PDK and saved a fortune in the process.

But no. Every Porsche to date to wear the GT badge has been flat six powered, this one would be no different and hang the expense. And it would only have manual gears (though we believe PDK will be made available), as well as GT3 front suspension like the last. 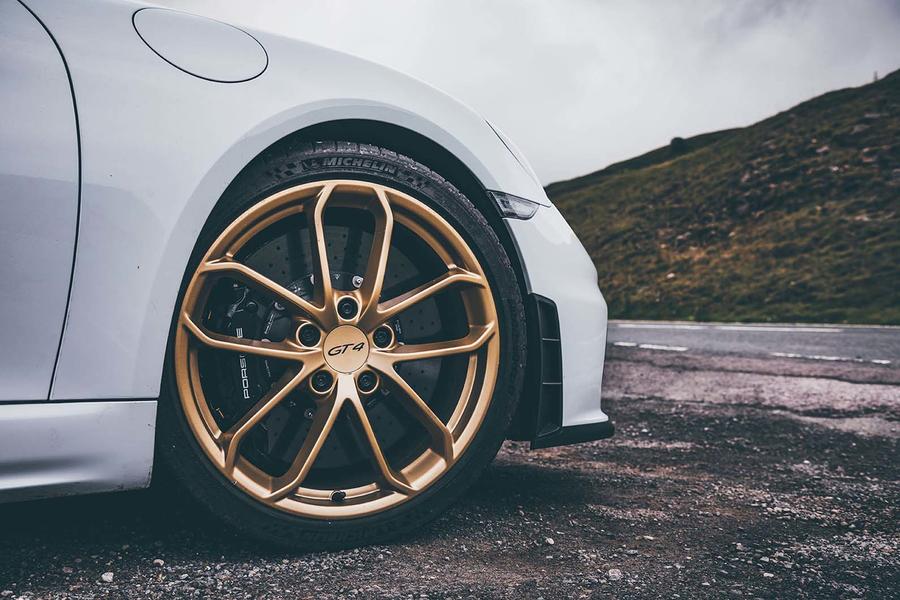 Yet despite these modifications and the aero package offering half as much downforce again as the previous GT4 (but with no drag penalty), it’s very much business as usual inside. There’s some Alcantara and GT4 badging (plus optional carbon fibre race seats in the test car you need to sit in before choosing), but even when you twist the key and hear the flat six spark up it doesn’t feel like you’ve finally reached the promised land. You may be grateful there’s no four cylinder fart, but six-cylinder Caymans are nothing new and like them, this one does not threaten to rip your head off at the first blip.

Indeed despite offering over 100bhp per litre, it is reasonably quiet, flexible and civilised. There’s enough of an edge in its voice to suggest there’s a monster waiting to be unleashed, but that’s being saved for the 911 GT3 which will rev at least 1000rpm higher than this, all the way to 9000rpm, minimum.

In short, this is a very pleasant car in which to go about your daily business. All the usual refinements are here – air, cruise, digital radio and so on – and there are times you might even forget you’re in a GT car.

But not on a decent road. On the way, you might even fear that this car has lost its edge, that the promise of a 4-litre, flat-six Cayman – which to me sounds about as enticing as it gets – may not be entirely fulfilled. The car feels so, well, normal. 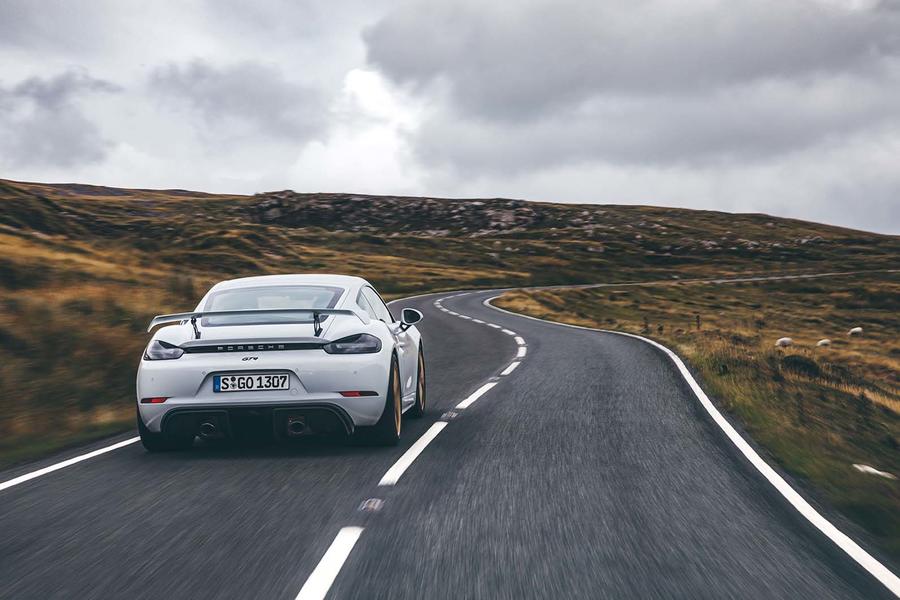 Have faith. It’s been a while since I’ve driven the old GT4, but I’d say some sense of occasion has perhaps been lost, that as a thing in which simply to stooge about this car feels less special than the last. You can look at the 80kg weight gain as a possible reason, but I think the car is simply set up to be more usable more of the time. Which is fine so long as when it matters, it delivers.

It delivers. Actually part of the joy of this car is the re-education process that comes with it. It’s amazing how rapidly the diet of paddle-shift turbos has become the norm, how quickly you forget how things always were, and how recently. You can’t just plant a hoof and expect it to take off: maximum torque doesn’t arrive until there’s 5000rpm on the clock. In a Cayman GTS that figure is 1900rpm. The car makes you work which means, of course, it gets you involved.

So drop a couple of gears, press the auto-blip button if you must (they should have hidden it behind the steering wheel so your mates will think the rev-perfect downshifts are your own doing), get the revs above the magic mark and let it go.

Now the engine is superb, a searing, soaring powerhouse that seems as surprised as you to hit its 8000rpm limiter. It feels like it would go forever or at least a lot farther and, in time and in 911s, I have no doubt it will. The gearbox can been criticised its ratios that are little different – if at all – from those in the last GT4 and still too long in all (bar top which is too short), but the shift quality is essentially faultless. Fast, fluid, mechanical in action with just enough heft… can I just say now how lovely it is to be talking about changing gear again in such a car? 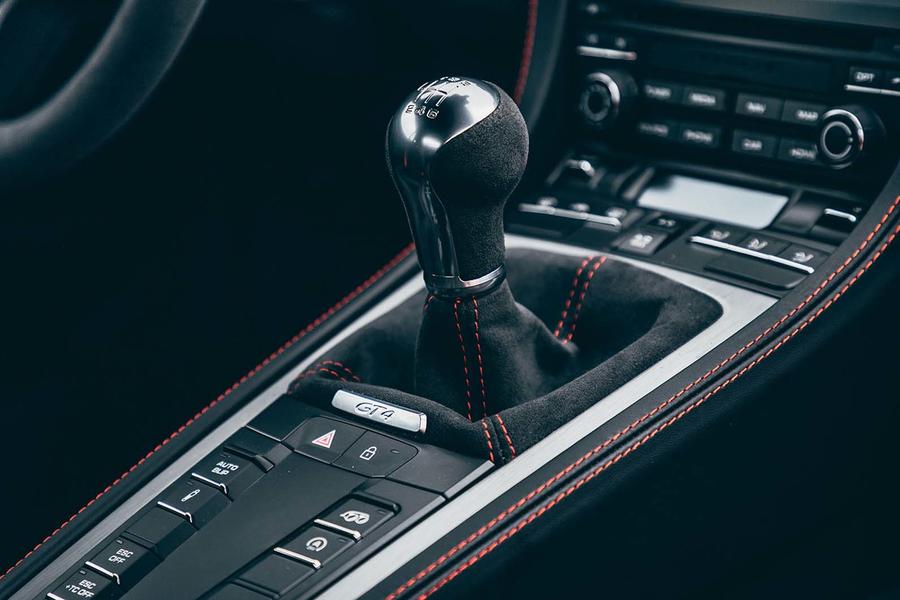 But even a stick-shift, atmospherically inducted powertrain like this still plays a supporting role to the Cayman’s chassis. Grip levels on standard Michelin Pilot Cup 2 tyres are almost gratuitous – in fact I’d like to see a harder, skiddier option available – the steering unsurpassed among other electrically assisted systems. Together they allow the car to flow along the most difficult roads with breathtaking precision and ease. On the limit it’s probably the best behaved mid-engined car I’ve driven, trumping even the Alpine A110 because it has a gentle limited slip differential providing little additional understeer on the way into a corner and as much oversteer at the exit and you could want. In fact the back moves quite fast as you’d expect, but it’s so linear it’s easily caught. 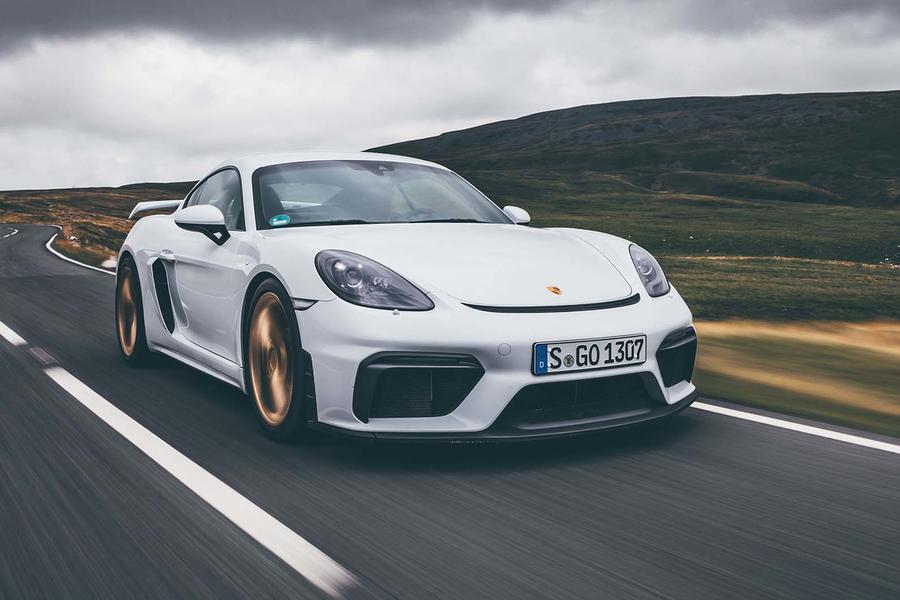 The Cayman GT4, then, is a near pitch-perfect introduction to the world of the Porsche GT. For you it’s fast, fun and almost absurdly accessible. For Porsche, however good it is, it’s a car that’s likely to leave the owner wanting more, and more determined than ever to work harder for longer until he or she can graduate to the top table where GT3s dine in their increasingly varied forms. Job done all round, I’d say.

a bit flowery for me.

However a fine looking and driving car it seems.

The turbo 718 gets away with long gearing as people short shift and just use the torque, the GT4 should have had shorter gearing to match the high end power.

I really see this as the ultimate Posche sports car, well ahead of the more expensive 911.

Just checked and without options this car costs £75,348. The worrying thing is what other facts are wrong, if the publication can't get even the most basic thing right. And while we're on the subject of facts, why not simply quote the manufacturer's 420PS engine output. It really is a nonsense converting to bhp and just another potential source of error.

And trust me to get the spelling wrong

Then again, theere is no edit facility...