9
Evocative six-cylinder drop-top gets Porsche's seven-speed automatic. Is it an upgrade over the manual?
Open gallery
Close

What you’re looking at here is likely to be the best-selling version of what is arguably the highlight of the Boxster and Cayman line-ups: the GTS 4.0.

Until now, this sublime six-cylinder has only been mated to a six-speed manual gearbox, which gives it spot-on sports car credentials but is less of a draw in the showroom, where PDK tends to be king. So here we have a GTS with the familiar seven-speed version of the always snappily titled Porsche-Doppelkupplungsgetriebe transmission.

At £2303, this dual-clutch automatic upgrade doesn’t come cheap, but you do get a small, 7lb ft uplift in torque, which brings the total to 317lb ft, while the claimed 0-62mph time tumbles by a half a second compared with the manual, taking a scant 4.0sec. That said, the top speed of the PDK car is 179mph, a 3mph drop over its three-pedal twin. One to remember for the autobahn perhaps.

You will save a little on running costs, though. The PDK stretches a gallon of super-unleaded over 28 miles, compared with the 25.9mpg promised by the manual. CO2 emissions are reduced, too, from 247g/km to 230g/km.

Otherwise, it’s the same as the manual car, which means you get that same sonorous 395bhp 4.0-litre flat six that’s lifted largely unchanged from the Motorsport-flavoured GT4 and Spyder models, plus the same GTS chassis upgrades that brilliantly tread the line between edge-of-the-seat driving excitement and everyday usability. 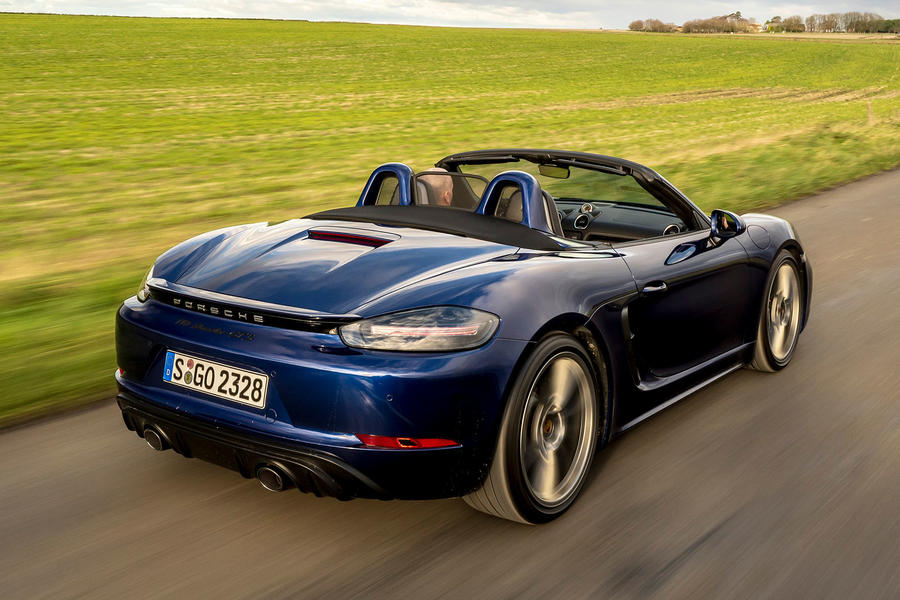 Porsche’s dual-clutcher is one of the best in the business, so there were no worries that dropping it into the GTS 4.0 could end in catastrophe. But does it fundamentally affect the character of a car that’s one of the best for driver thrills and interaction?

Amble along and it’s not hard to fathom why so many customers choose not to get involved with cog swapping themselves. With the gearlever slotted into D, the Boxster pulls away smoothly with none of the occasional dim-witted dithering that can afflict many dual-clutch gearboxes, while on the move, the changes are delivered with crisp and quick efficiency.

Get up to motorway speed and seventh offers a relaxed cruising gait. The engine's ample mid-range muscle means you can quickly pick up the pace when baulked without the gearbox dropping down a ratio or two. Roof up or down, it’s a genuinely relaxing cruiser, especially with the dampers in their Comfort setting rounding off any sharp edges in the surface. Only the booming tyre roar on coarse surfaces disrupts the sense of calm.

So it’s easier to live with, but that's to be expected. What about when you want to run hard and raise a smile or two? Select Sport on the Driver Mode controller that nestles on the Alcantara-trimmed wheel and you immediately sense the extra incisiveness to the throttle pedal.

Then you notice that the transmission holds on to gears longer and upshifts are delivered with whip-crack speed and total smoothness. It creates genuinely startling performance, as the howling and yelping flat six’s muscular efforts are delivered in one long surge of relentless acceleration. This is a properly quick car in a straight line.

Brake hard for a corner (the all-disc set-up is powerful, progressive and controlled by a pedal with just the right amount of firmness) and the gearbox responds, shuffling quickly down the box to nail just the right gear for a slingshot exit. Of course, you can, and should, use the paddles to select gears yourself, just to add an extra dimension to the human-machine interface.

On roads you don’t know well, the PDK allows you to cover ground at an astounding rate. The ability to keep both hands on the wheel and rattle down the gearbox with no more effort than an extended digit means you’re very rarely caught napping in the wrong ratio if a corner is tighter or an uphill exit steeper than you thought.

Not that the engine can’t cope with being a gear or two higher. The deep reserves of big-displacement naturally aspirated torque can fire you down the road as if attached to the horizon by a giant elastic band. It has been said before, but this engine is a corker, from its beautifully proportional throttle response through to its yelping and howling soundtrack that takes on a gloriously hard-edge timbre as the revs race past 4000rpm and on to the heady 7700rpm cut-out.

Equally spectacular is the chassis. It doesn’t matter what gearbox you specify with the GTS: you’ll be dancing down the road in one of the most beautifully balanced and involving sports cars there is. The steering’s rate of response, weighting and feel are spot-on, allowing you progressively load the suspension as you turn, then feel the car pivoting deliciously around your hips before using the engine's torque, the perfect throttle response and the limited-slip differential to subtly straighten your line on the exit. The body control is other-worldly too, particularly in Sport, where the dampers simply shrug off the gnarliest of the Oxfordshire roads on our test route. Only over the most viciously sharp imperfections does the Boxster’s bodyshell show any hint of scuttle shake, and even then, it’s nothing more than the merest shimmying of the rear-view mirror. 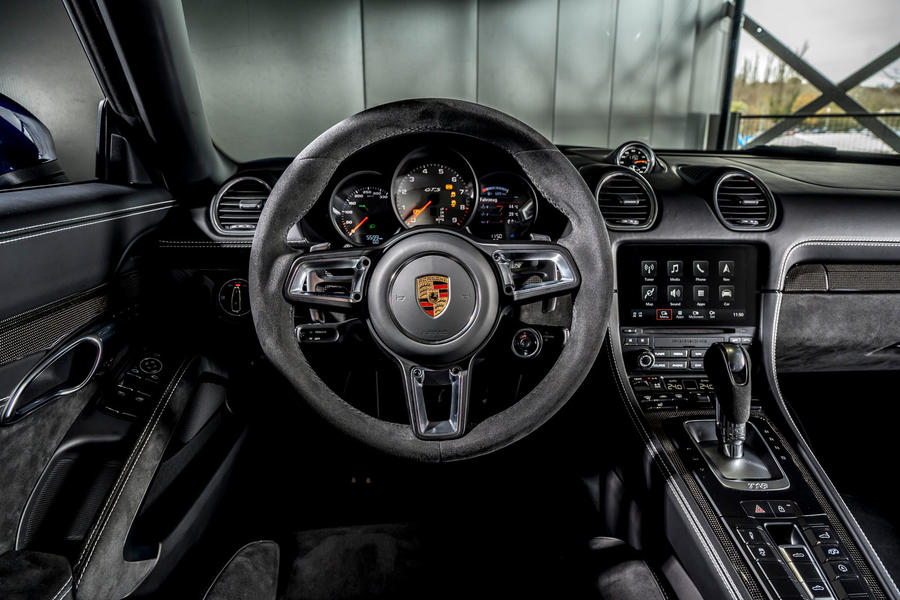 Ultimately, the manual GTS remains the top choice for drivers who want to be engaged and entertained every time they clamber behind the wheel. It’s not as fast outright as the PDK, but the process of caressing the clutch and guiding the gealever adds an extra layer of involvement to an already hugely immersive machine.

Yet given that the vast majority of motoring most of us do is of the mooching rather than the maximum attack variety, it’s not hard to see why for so many the PDK is, ahem, the automatic choice.

It doesn't damage the ultimate driver appeal of the GTS and it makes day-to-day driving more bearable if, like most people, you deal with traffic more than you tear down back roads. 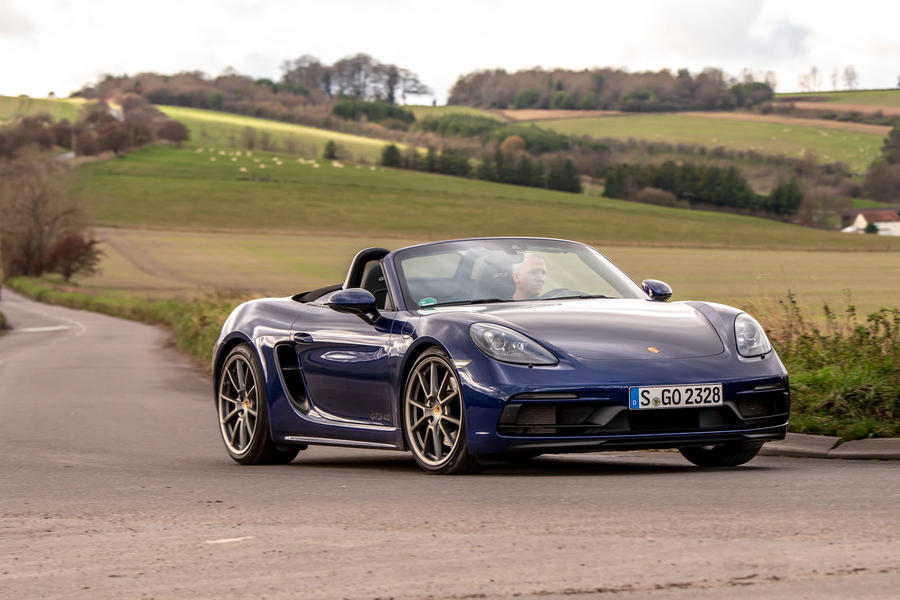 Had the previous PDK GTS, felt I missed out on driving - Have the 718 Manual now as I want to drive a car (no commuting). The i3/Nissan Leaf gets the jump on any PDK equipped car at an island as you just cannot gauge it correctly. 718 GTS will run at 30 MPH in 6th and not struggle all the way up the rev range for cruising ability. Also manged 32.9MPG over 180 mile route around wales (no motorways) but busy traffic.

In the world of EVs automatics/PDKs are dead as they are irrelivant - EVs for commuting ICE for fun!

BlahBlah43 26 November 2020
Imagine how much better the numbers would be for the manual if it was properly geared like all sports cars should be. Its really frustrating as a manual lover. No excuse why Porsche ruins that experience of a proper manual. Porsche is a company obsessed with every detail so I dont buy the excuses they give on the poor gearing. They should have fixed this before coming out with a pdk. Its clear to see where there priorities are
BenzinBob 26 November 2020
one day I hope to live in a world where im free to make the choices I want without some prick behind a keyboard telling me why im wrong.
View all comments (7)