10
Naturally aspirated 4.0-litre engine feels like the missing piece of the puzzle. The Boxster GTS is as sublime to drive as it is easy to use day to day
Open gallery
Close

Six years ago, Porsche, for some vague reason nobody truly understood, decided its Boxster and Cayman replacements – models to be prefixed ‘718’ – should have four-cylinder engines.

For the Boxster this meant the loss of its mid-mounted flat sixes, chiefly the 2.7-litre entry level and the fruitier 3.4-litre of the popular Boxster S. It also meant the gloomy spectre of downsizing with reliance on forced induction had fully descended on the greatest roadster of modern times, and obviously this hurt.

For a while it seemed even the upcoming but as-yet-unannounced new versions of the scintillating Cayman GT4 and tent-roofed Boxster Spyder wouldn’t be spared. And that was excruciating. But then Porsche realised that the appeal of these very expensive special-series sports cars, marketed heavily on ideals of mechanical purity and soul, might not survive the association with an effective but flatulent 2.5-litre four-pot turbo only half as fun to wring out as what you’d find in an old Subaru Impreza. And so it did something unexpected.

Instead of tuning the howling but retired 3.8-litre of the old Cayman GT4 and Boxster Spyder to even greater heights, or winding back the insatiable 9000rpm 4.0-litre of the current 911 GT3, it took the 3.0-litre flat six in the 911 Carrera, removed the turbochargers and enlarged the capacity to create an almost entirely novel 4.0-litre unit. And to lubricate the economic case, Porsche decided it would eventually offer this unexpected gem not only in the motorsport-engineered 718 flagship models but also in updated versions of the more attainable and available GTS-badged derivatives – cars that, though still excellent, had by then sadly fallen prey to the small-capacity turbo regime.

So here we are: Porsche’s biggest volte-face since the 911 GT3 recouped its manual gearbox, even if the new engine won’t be made available throughout the 718 range. It's a decent victory. 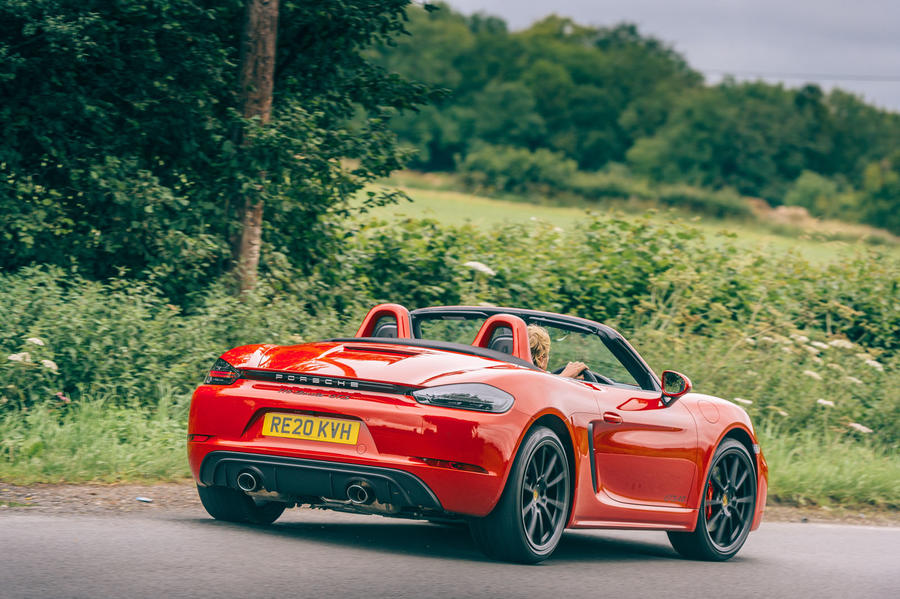 It’s difficult not to get slightly carried away by the mere thought of this 4.0-litre Boxster.

Here we have a modern-feeling and equipment-rich mid-engined sports car that possesses a 7800rpm naturally aspirated engine developing 395bhp and, in the context of unstressed induction, an impressively healthy 310lb ft. And it comes with three pedals, and an encouragingly low kerb weight of 1405kg.

That isn’t Lotus-light, admittedly, but arguably the best Boxster in the model’s 24-year history is certainly no heavyweight. That mass is also concentrated between the axles, which are spaced neither buttock-clenchingly close nor lethargically far apart, and so fundamentally it's a delicious recipe, and one we thought forever lost. At the back there sits nothing more complex than a mechanical limited-slip differential (albeit one that works in tandem with brake-based torque vectoring), and while the steering is electromechanical rather than hydraulic, Porsche is now adept at tuning these set-ups.

As for practicalities, there is surprisingly generous storage both in the front of the car and, via a shallow compartment, also behind the engine. The canvas roof then rapidly folds back or unfurls at speeds of up to 40mph, which is usefully higher than the industry standard of 30mph. Despite its engine displacement, the Boxster GTS 4.0 will also cruise at nigh-on 40mpg and on the move is damn near as quiet and supple as the latest Volkswagen Golf. I’d drive this Boxster GTS the length of the country in an instant. It feels surprisingly mature: 911-esque, only more subtle, supple and easier to park.

Perhaps it’s going to be quicker to list with things the Boxster GTS doesn’t do well, so here they are. At £65,000, in absolute terms this is an expensive car, though these days you’ll pay almost that for an AMG A45 S, and the cheapest credible alternative I can think of in terms of usability, versatility, desirability and pure ability is – sorry – Porsche’s own 911 Carrera S Cabriolet, which costs £104,000.

The gearing can also still feel overly long (and the shift action more efficient than memorable), but once you get used to attacking good roads using the meat and satisfying extent of second gear's vocal top end, frustrations mostly evaporate. Maybe the brakes are overservoed, but honestly it’s so marginal this barely seems worth mentioning. And don’t expect the same diamond-edged motorsport yowl made by the 911 GT3’s 4.0-litre screamer, though there’s certainly character enough here to brush aside the straight six in the new, similarly priced and deeply absorbing BMW M2 CS.

Yet, as ever with the Boxster, it is the handling that truly delights, and not even the new engine can challenge this fact. This test car covered B-roads with the kind of pliancy you simply wouldn’t credit given the GTS models sit an entire 20mm lower than standard and ride on 20in wheels. There are two well-judged damper settings, with the firmer only ever necessary on particularly testing routes where float can become an issue. The rest of the time you simply get in and go, preferably with Sport mode engaged to unlock the sharpest possible throttle response.

The Boxster GTS splices through corners with what I can only describe as ‘gentle accuracy’, where the tightly controlled roll rates are so perfectly in tune with the steering response that you can’t help ghosting into corners on the exact line you’d visualised only moments before.

It feels special. More so because this chassis is exceptionally well balanced and forgiving, simultaneously feeling softer but just as taut as that of the previous turbocharged GTS and also more in tune with the road surface. Admittedly these are tiny improvements on an already stellar-handling car and, given the geometry and hardware are mostly unchanged, I suspect the perceived difference is mainly down to pervasive effects of turbo lag in the old car – never much, but enough to notice – against the total precision of the newer car’s powertrain.

In the same vein, without the semi-slick Michelin tyres of the Boxster Spyder, with which the GTS shares its engine, the ‘lesser’ car is also more progressive and controllable around the limits of grip. With PSM Sport engaged and smooth steering and accelerator inputs, its chassis will adopt gratifying angles without you having to switch the electronic aids fully off. Cake and eat it territory, in other words. 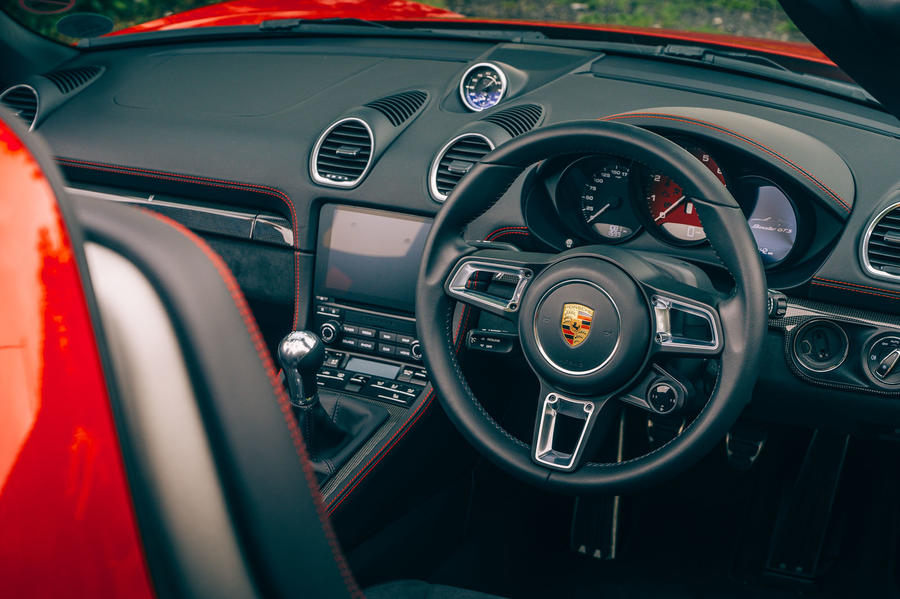 Surely, then, this is the only Boxster worth having?

Well, actually, no. At £48,650, the lowliest Boxster remains an excellent junior mid-engined option, even if the Alpine A110 now gives prospective buyers serious pause for thought. At £56,000, it’s the Boxster S that now looks the odd one out. For £10,000 extra, you can now have a machine hardly any faster in the real world but one better equipped, more satisfying to extend and, yes, endlessly sweeter to listen to.

Simply, the Boxster GTS is an everyday sports car that feels supercar-special to drive. 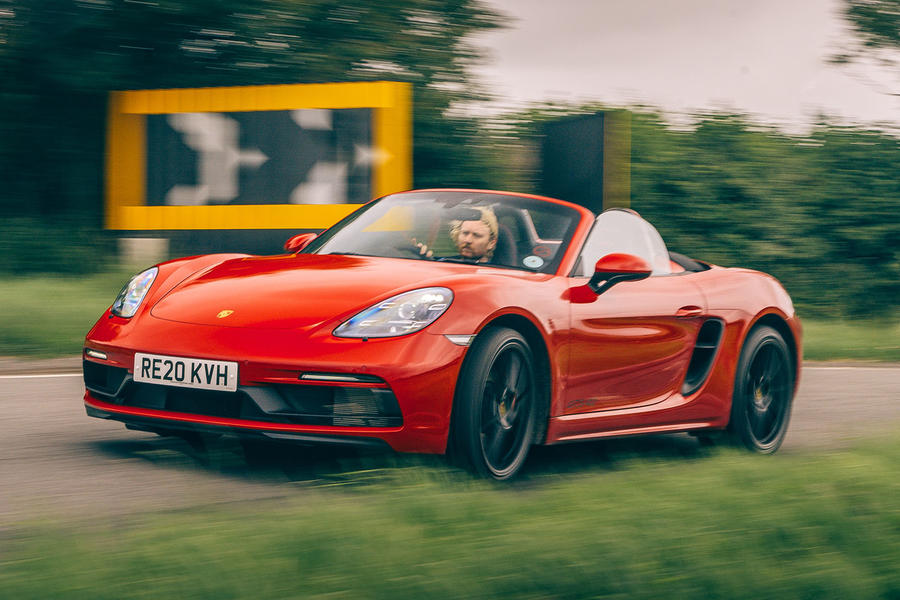 Glad to read about this car reviews. I like this car

Yes, a vague reason to add a flat 4, maybe the history of Porsche was built on the flat 4 from the 356, 550, or 904. You know, that pedigree of design and racing that made Porsche fantastic. If that doesn't blow your skirt back, you could say the 3.5L flat 4 also has more useable torque more effeciently at 2k RPM vs having to rev up to 7k. It's like Mr. Lane has never driven the 3.0 or 3.5 variant on any road track.