From £28,4956
Range-topping electric hatch gets bigger battery for more range and more powerful motor. Is it worth the price jump?
Open gallery
Close

But this new, 62kWh battery-equipped Leaf isn’t just about getting you pretty much exactly from London to Blackpool without rejuicing. Don’t be fooled by the rather dull trim name: this is as close to the Leaf Nismo as the UK is going to get, for now at least, because that bigger-capacity battery allows the motor's power to be boosted from the 148bhp to a healthy 214bhp. Torque is up slightly, too.

Also new is the Leaf e+'s ability to use the latest public rapid chargers; with its standard charging rate of 70kW, it can reach 80% in 40 minutes, just like the 50kW-limited regular Leaf. Other, less significant changes include a new front end design. 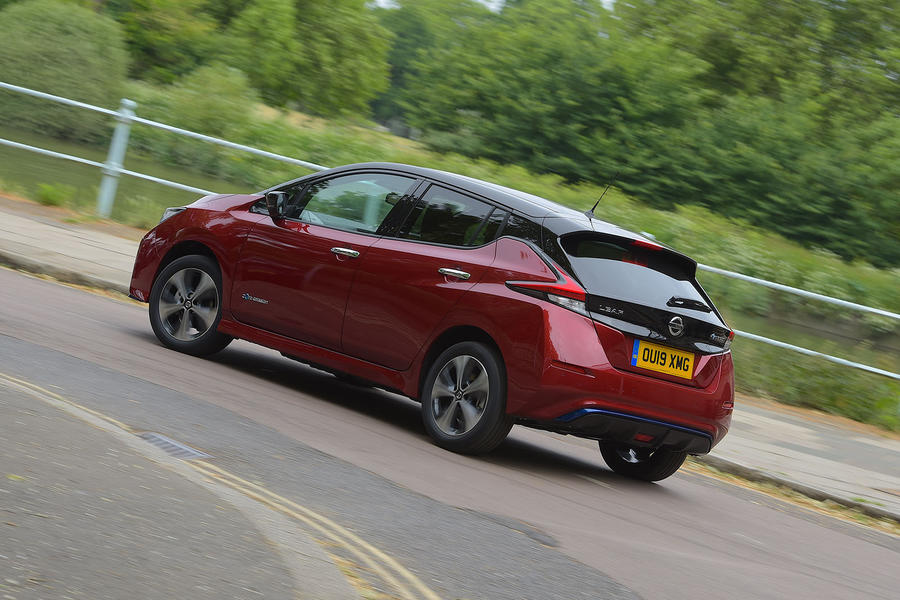 The e+ version of the Leaf is better in some ways and worse in others. There’s a trade-off for a battery and power upgrade this significant, and it’s more pronounced than with a similar upgrade to a petrol or diesel car.

Let’s start with the good bits: that power boost is noticeable from the off. Nissan quotes a 0-62mph time of 7.3sec - the same as the BMW i3, although still a way off the unusually brisk Hyundai Kona Electric. Nevertheless, this is a Leaf that no longer feels a touch out of its depth at motorway speeds, remaining punchy above 70mph.

Having the longer range means attempts to exploit the Leaf’s newfound straight-line urgency don’t leave you with feelings of guilt and anxiety once you glance at the predicted miles left. We weren’t able to run the Leaf e+ right down to empty, but indications are that it should be easily capable of breaching the 200-mile barrier, even if you have a hyperactive right foot.

As with the Kona Electric, however, this level of power and torque on tap from the get-go causes some issues in the chassis department. Nissan has revised the suspension for the e+, but that doesn’t prevent the traction control from going berserk when you try to move away smartly with steering lock applied. The steering wheel squirms this way and that, too, while undulating Tarmac makes the car lose grip all too easily when its safety systems are turned off.

Corners aren’t to be relished, either, if only because the increased approach speed means more dive under braking and more lean when turning in via the feel-free helm. Much can be put down to the car’s quoted kerb weight: at well over 1700kg (about 150kg more than the regular Leaf), it's a fair chunk heavier than the Kona Electric and nearly half a tonne more than the far more agile BMW i3S.

Still, what matters more to many electric car buyers (generally speaking, those who drive into and around urban areas) is that the ride is considerably less disturbed by bumps than in the i3s. Refinement is decent, too.

Arguably, that the Leaf e+ is more adept when taking it easy than when pushed near its limits shouldn’t faze potential owners. Nobody is realistically expecting it to rival a hot hatch, or even a warm one. In some ways, this defeats the purpose of giving it more power, but we can accept that most buyers will use it only in small bursts, when overtaking or getting up to speed out of an oblique junction, say.

The interior of the e+ is unchanged from the regular Leaf, meaning it has a wealth of equipment, reasonable space, acceptable material quality and no reach adjustment for the steering wheel. The latter was particularly irksome for this 6ft 2in tall tester and borders on absurdity given the price this model commands. 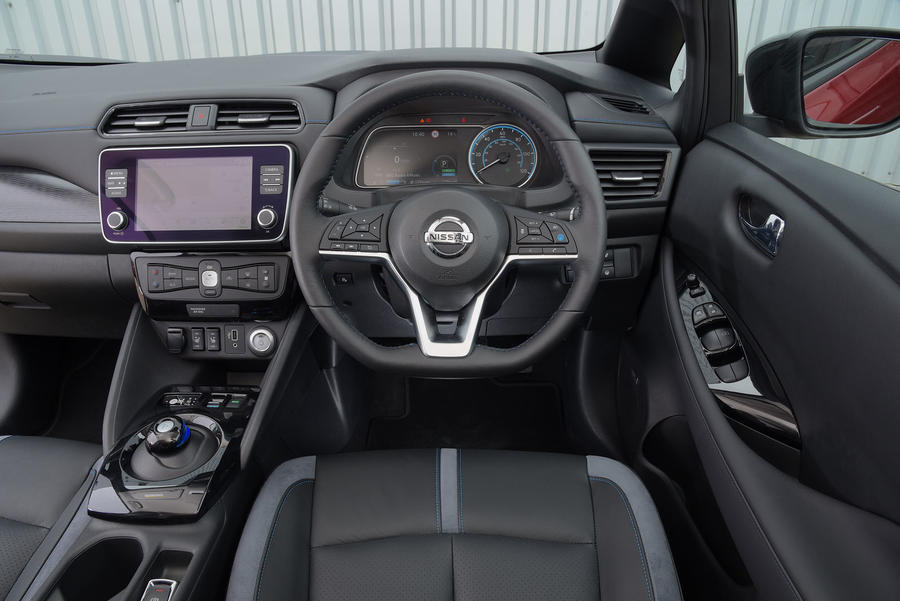 Ah yes, the price: perhaps the biggest stumbling block with the Leaf e+. With Nissan offering the uprated powertrain only with top-flight Tekna trim, you’re looking at a car that would be within striking distance of £40,000 were it not for the £3500 government grant.

Adding around £5000 to the list price of the regular Leaf doesn’t seem too outrageous, but it limits the car’s appeal to those who really need the performance or whose range anxiety really gets the better of them.

Of more significance is the e+'s placing among rivals. While you can have a Leaf today, those prepared to join the waiting list for a Kona Electric will get a better-value, longer-range proposition.

And that's before considering all manner of new arrivals - the Peugeot e-2008 and Volkswagen ID 3, to name but a few - that are expected to arrive with prices starting below £30,000. Even the Tesla Model 3 is only a couple of thousand more. Finance deals aren’t particularly remarkable for the Leaf e+, either.

Regardless of this car's decent performance statistics and strong equipment tally, it doesn’t offer the dynamic sophistication or interior quality you'd expect at this price point. 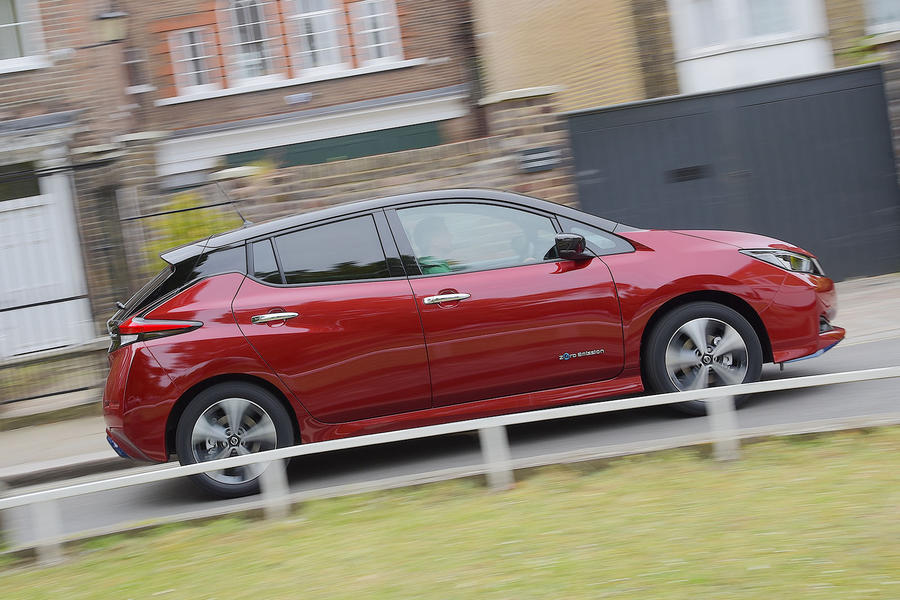 Autocar seems to be turning into What Car? A sort of love-in for mundanity. “Be careful not to buy an EV, it’s not wearing a beige cardigan”.

I find this piece to be an exercise in hair-splitting and box-ticking. Hard to believe that the writer has any affinity with the forward-looking gear heads and tech enthusiasts who actually buy electric cars.

For those people, the bigger battery Leaf makes a lot of sense and they don’t care about 90% of what’s written in this review.

Maybe Autocar should start to compare refrigerators, but only the ones hidden behind wooden doors. We wouldn’t want anything that stands out, heaven forbid.

Will motoring mags join the 21st Century when manufacturers start to advertise more EVs in their pages, giving them no choice? It’s actually hard to believe on current evidence.

At least Classic Car mags reflect the era’s they are focussed on. With Autocar, it seems to be perpetually pre-dieselgate.

The current EV market reminds me of the Plasma/LCD market of 15-20yrs ago when a 32" might be 5 or 6 grand. The technology, manufacturing and market all matured and now they are cheap as chips and the llosing technology has disappeared. There will be a time to buy EV's, but I for one am not convinced it is yet. EV's have still to cycle throught those phases.

Top model so not quite that expensive, as to alternatives

Several mentions of the Kona, which I like, but it's been taken off sale in the UK so shouldn't really figure as an alternative.

As to other questions about fillng tanks I spend 10 minutes queueing, filling and paying for petrol once a week, to plug-in an BEV at home would take 3 times 30 seconds a week, so it'll actually save time (and I do 30k a year).

And despite doing 30k a year I only once did 150 miles in one day so there'd be no reason to use public charges that often and pay 3 times the price per kW. Afterall just how often would you be prepared to pay £18 a gallon!

Other than that a tad expensive but look at  the savings over 5 year compared to an Auto Focus diesel, and remember it's the top leather clad model which needs to be taken into account.

Agree with your points - lots

Agree with your points - lots of people jump out of the woodwork on BEV articles claiming regular 500+ mile journeys but most of us rarely go more than 150 miles in a day.  If you're lucky enough to have somewhere to charge at home then you are miles better off going electric in terms of total time spent "filling up".

The only problem with this Leaf is its proximity to the base Model 3, which goes just as far, is quite a bit faster and has the option to be upgraded to full autonomy later if that ever takes off.  It also gives you access to the supercharger network.  I suspect most people would try and find the extra, especially if the PCP isn't much different.

Ehem, nobody seems to consider people who can't charge home

they have no alternative but to use public charging facilities - then quality of those and frequency of their availability and waiting times - shall matter quite helluva lot. I keep hearing this nonsence time and time again - how convenient it's to charg home - nice to hear. It's like people are either are entirely ignorant about reality of so many others that quite large numbers of people, don't have access to such convenience; or are so self centred they can't be bothered to focus on needs of others, merely reckon what works for me - is just fine. Yet everyone is supposed to turn electric - or are they not.

Ans: Not (at the moment)

..... Yet everyone is supposed to turn electric - or are they not.

Where has anyone ever said everyone must buy an BEV by 2020 or the year after that?  Just because a solution isn't suitable for 15% of car buying public AT THE MOMENT it doesn't mean to say 85% can't have the option of buying one within the next 4 years.