8
The new version of the world's best-selling electric car gains a bigger battery and more power. How does it compare to rivals such as the Volkswagen e-Golf?
Open gallery
Close

The first-generation Nissan Leaf, launched back in 2010, will likely be remembered as a landmark machine in the development of electric cars.

It might not grab the headlines as the likes of Tesla models do, but the Leaf was a game-changer: one of the first truly affordable and viable EVs. Eight years on, it is the best-selling electric car of all time.

And it’s a sequel that arrives at an interesting time. Not only have a string of other electric hatchbacks shown themselves to be a match for the Leaf, just about every car firm you care to mention – from Ssangyong to Hyundai, Audi to Jaguar – are lining up to flood the market with battery electric cars, many of which promise to break new ground in terms of range and performance.

The pressure is on Nissan to respond, then. And expectations that this second-generation Leaf will be as ground-breaking as its predecessor are high. Perhaps unreasonably so.

Predictably, viewed through that somewhat uncharitable prism, the new Leaf could, like most Hollywood sequels, be considered a little disappointing. Sure, it’s bigger than before, and better – it has a WLTP driving range of 168 miles (up from 124), and a 148bhp motor (up from 107bhp) – but it’s all steady increment, rather than a mighty leap.

It’s evolution, not revolution. Which, if you look at this new Leaf removed from any weight of unfair expectation, makes it arguably the most compelling option on the market right now for anyone considering an electric car.

We've already driven the Leaf abroad, but this is our first taste on the UK's rougher - and, during our test, snow-covered - roads. 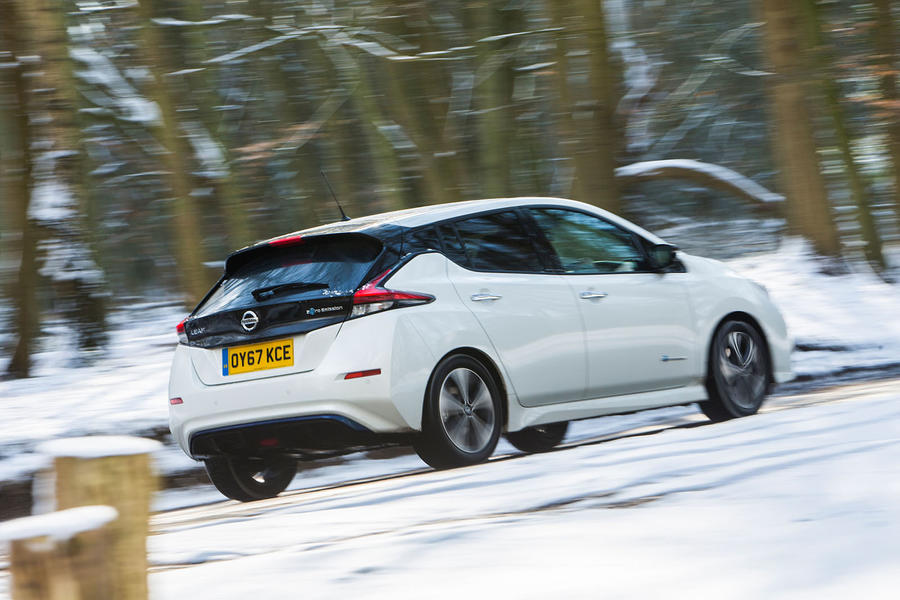 Essentially, a refined and improved version of its predecessor. Thanks to the underfloor battery it has the same high driving position, and it’s easy, comfortable and confidence inspiring.

The electric drive is responsive and direct, yet never wild, and the steering is weighted, proportionate and a little quicker than before, without offering much feel or dynamism.

It is, as with many electric cars, all a little detached, and it’s not going to rival a combustion-engined alternative for sheer thrills on a flowing road. But, even with its improved range – made possible by a 40kWh battery replacing the 30kWh unit from the old car – it’s unlikely most would-be buyers will ask it to: most will spend their days as urban runarounds, an environment in which it will thrive.

The most notable driving feature of the Leaf is the new ‘ePedal’ setting which, when selected, kicks in regenerative braking as soon as you lift off the accelerator pedal. The heavy deceleration that kicks in when you lift off is initially jolting, but quickly becomes second nature. Once you adjust your driving style to fit – slowly easing off the accelerator on approach to junctions, for example – you’ll rarely need to make use of the brake pedal.

The interior of the new Leaf is an updated, generally improved version of the old one: pleasant, comfortable and reasonably mature. Our Tekna model also came with plenty of kit, including a Bose sound system, heated seats and semi-autonomous driving functions. All that said, the touchscreen and other general material quality can’t match the perceived quality of traditionally powered cars at this price level.

This new Leaf is slightly bigger than the old one, making it more spacious inside, and practical: the boot is 405 litres, up from 370. Combine that with the extended range and the added appeal of this car against some of its class rivals becomes clear. 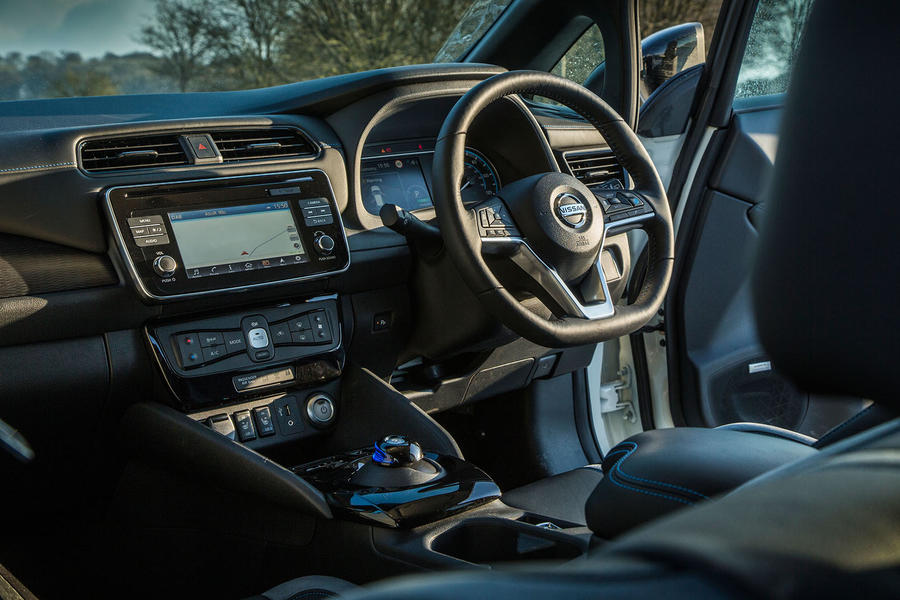 Perhaps the most ground-breaking thing about the new Nissan Leaf is, conversely, it it isn’t all that ground-breaking. At a time when many car firms are aiming to push the electric car market into the future with giant leaps, Nissan has made a car for the present, taking small but significant strides. It takes everything that’s good about the previous Leaf, and improves on it in every area that matters. It’s not hard to imagine that a lot of early buyers will be existing Leaf owners seeking an upgrade.

Notably, the areas of improvement include price. This is a car that has more battery range, motor power, torque and space than its predecessor and yet, depending on trim level, is up to £1500 cheaper.

It’s also here – and right now. The many bold, potentially game-changing models being developed by other car firms aren’t - and many are still years away. And, when they do arrive, they're likely to be expensive. For those whose lifestyle fits a small electric hatchback, few machines on the market at the moment offer as compelling an argument in terms of price, available charging infrastructure and practicality. 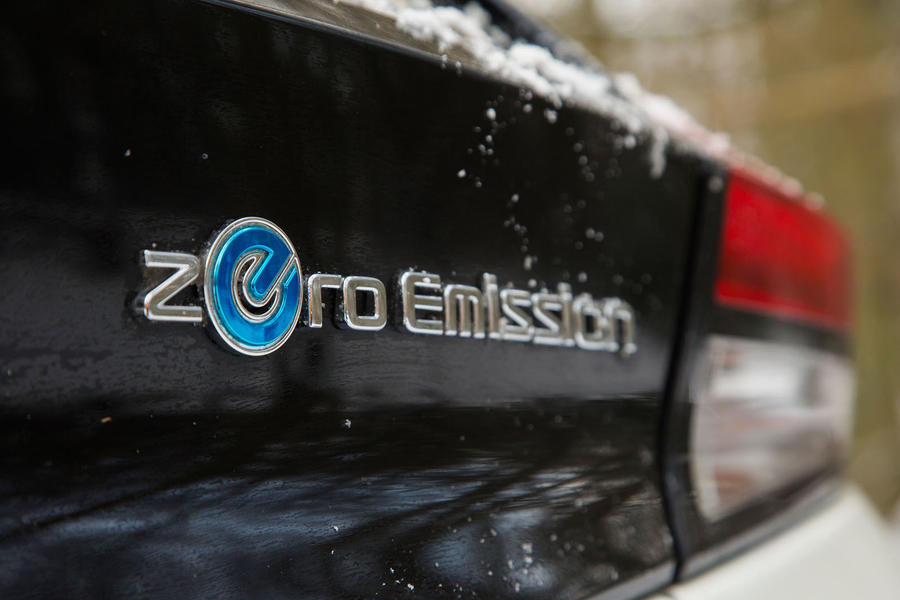 Atwood is a cub. At this

Atwood is a cub. At this price, with this range, and with this space, this car is groundbreaking, because no competitor comes close to it. It has a greater range and more space than an i3, and is far better suited for freeways too, think about that.
AnatolyVyacheslav 22 March 2018

Dear  Buyer/ Buyer mandate We currently have Available FOB Rotterdam/Hosuton for JP54,D2, D6, JetA1 with good and workable procedure, whereby buyer will dip test in seller tank with proof of product.Kindly Contact us via (anatolyvyacheslavoil@mail.ru) for SCO as soon as possible, so we can move to the next step.

We need an electric car revolution

We've had the annoucement from the government over phasing out fossil fuel cars by 2040, but I'm yet to see any concerted effort to bring in more charging stations and to ensure the electricty generation and transmission infrastructure is up to meeting the extra demand. And if we're to rely on renewables, we need to massively improve our energy storage facilities, pumped hydro being one option.