Electric cars have altered our perception of refinement with their near-silent drivetrains: in just a few years, the standards in this particular area have increased enormously. Even so, it’s difficult not to be impressed by the overall quietness of the new Maybach S680, a V12-powered limousine that for the most part is every bit as serene as the latest crop of high-end EVs.

Set off in the new leather-lined saloon, which has a 180mm-longer wheelbase than the new Mercedes-Benz S-Class from which it’s derived, and you can’t help but marvel at the hushed qualities of its engine. There’s an inherent calmness to its operation that puts it in the same exalted class as the Rolls-Royce Ghost for tranquillity.

The twin-turbocharged 6.0-litre V12, now mated to Mercedes’ own nine-speed torque-converter gearbox and 4Matic four-wheel drive system, is a development of the M277 unit used by its predecessor, the S650, making 603bhp and a stout 663lb ft of torque from 2000-4000rpm. That’s 18bhp and 74lb ft less than before but still 40bhp and 36lb ft more than is made by the 6.75-litre twin-turbocharged V12 in the Ghost.

The S680 is almost silent at step-off and on light throttle loads, and working it hard on open roads and motorways yields only a distant hum that always remains well isolated. Meanwhile, the gearbox, which can be operated via wheel-mounted paddles, shifts with silky precision.

The quietness of the drivetrain is enhanced by Mercedes’ Active Road Noise Compensation system. This works like noise-cancelling headphones, detecting unwanted low-frequency sounds and playing counter phased soundwaves over the car’s stereo to cancel them out.

Aside from its outstanding calm, the S680 also performs strongly, as evidenced by its 0-62mph time of 4.5sec. This is a heavy but quick car, perhaps not in the same league as the Bentley Flying Spur for outright punch but certainly among the world’s most accomplished cruisers. Terrifically seamless, it is enjoyable for the driver as well as soothing for passengers in the expansive rear. 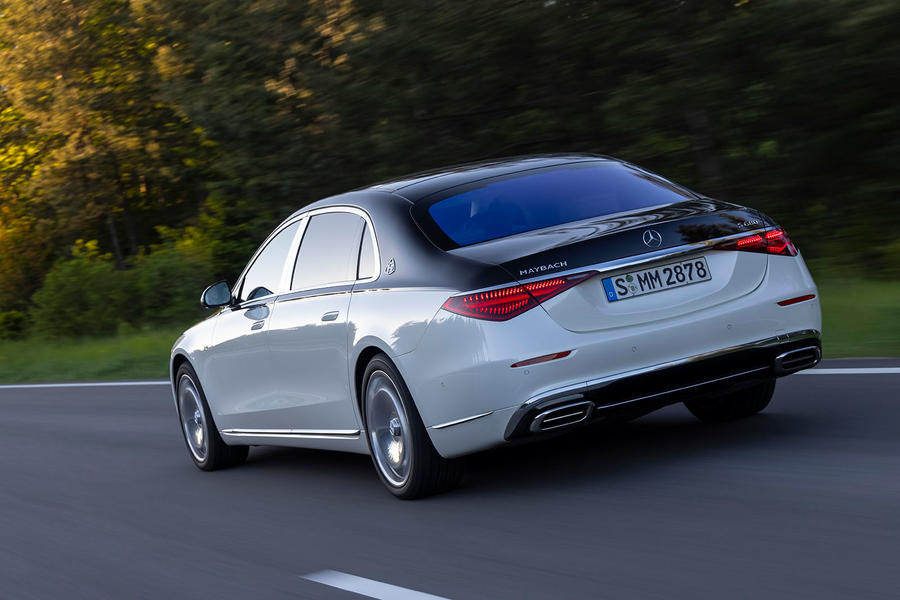 It’s not the sort of car that you muscle around. In fact, there’s a degree of delicacy to its operation; it steers with fingertip lightness and, despite its size, great precision. The optional Rear-Axle Steering system, which allows the rear wheels to turn up to 10deg, makes for extraordinary manoeuvrability in tight spaces.

The S680’s natural environment is at a sedate pace on city streets, where its low rev refinement comes to the fore. But it also makes very decent progress out on the open road, where the sophisticated steering and 4Matic system (which sends 31% of the drive to the front and 69% to the rear) makes it much more agile than any 5469mm-long, 1921mm-wide car really has any right to be.

Like the Benz S580, it also adopts the latest incarnation of Mercedes’ Airmatic air suspension, and the result is extraordinary body control and outstanding ride quality. The level of comfort is clearly above that of the already highly accomplished Benz S-Class; you occasionally sense a mild shimmy over higher-frequency bumps but, despite the underlying softness, there’s excellent vertical control.

It feels wonderfully tied down and remarkably well composed. Still not enough? If not, you can also specify a number of advanced chassis features, including E-Active Body Control, which constantly levels the car through electronically controlling the spring and damper forces individually at each wheel; Road Surface Scan, which uses cameras to evaluate the road ahead and then primes the springs and dampers; and Curve, which tilts the body into turns, with the height of the inner wheels slightly reduced to preempt any body roll. So configured, the S680 glides from corner to corner, providing the sort of otherworldly handling found on higher-specified examples of the Benz S-Class.

Plungers within the air springs automatically raise one side of the car and lower the other, so lateral forces acting on occupants are lessened, enhancing the feeling of wellbeing. For all of its undoubted appeal, though, the S680 can’t replicate the uniqueness of the Ghost or Bentley Flying Spur. Granted, Stuttgart’s design team has done more this time around to differentiate Maybach models, but there’s still no denying that it shares much of its exterior with a Benz.

Beyond an optional two-tone paint scheme, there’s a prominent new grille within a uniquely styled front bumper, an altered bonnet with a chrome central rib, Maybach emblems on the C-pillars and a reworked rear bumper with differently shaped tailpipes.

It’s a similar story in the cabin. It’s sumptuous and roomy of very high perceived quality, but once again it draws heavily on that of the Benz. There’s a new-look dashboard with rectangular air vents in the upper portion, a multifunction steering wheel with touch-sensitive ‘buttons’, a 12.3in digital instrument display featuring Maybach-themed graphics and a 11.9in portrait touchscreen dominating the centre console. 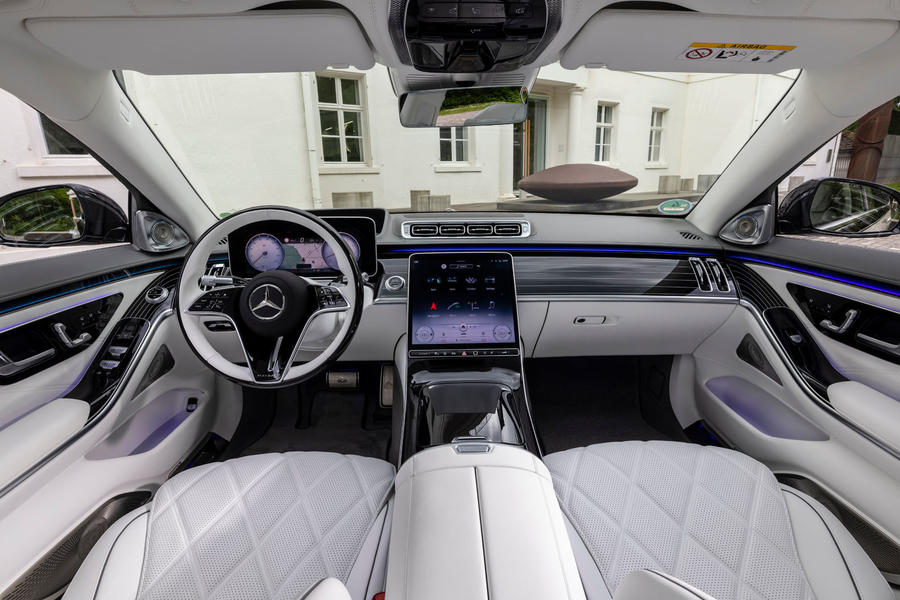 It all looks very tidy. There are far fewer analogue controls than before; even those for the air conditioning are now grouped in a digital menu. Along with touch commands, you can also access most of the functions using voice commands and gestures. A new head-up display featuring augmented reality is an option, as is a new 30-speaker, 1750W Burmester 4D sound system with subwoofers located in the backs of the front seats.

It’s in the rear, though, where much of the styling efforts are focused. You get a three-seat bench as standard, although most customers are likely to opt for the two individual Executive seats, which are each faced by an 11.3in touchscreen, in combination with a control tablet that can be used both inside and outside the car.

Soft nappa leather adorns most surfaces in the second seat row, and there’s an extra 85mm of leg room over the Benz S-Class, which now comes exclusively in long-wheelbase guise, giving the Maybach truly limousine-like accommodation.

Buyers can also add silver-plated champagne flutes and a refrigerated bottle holder in the middle of the rear bulkhead, perhaps for congratulatory toasts after clinching business deals. 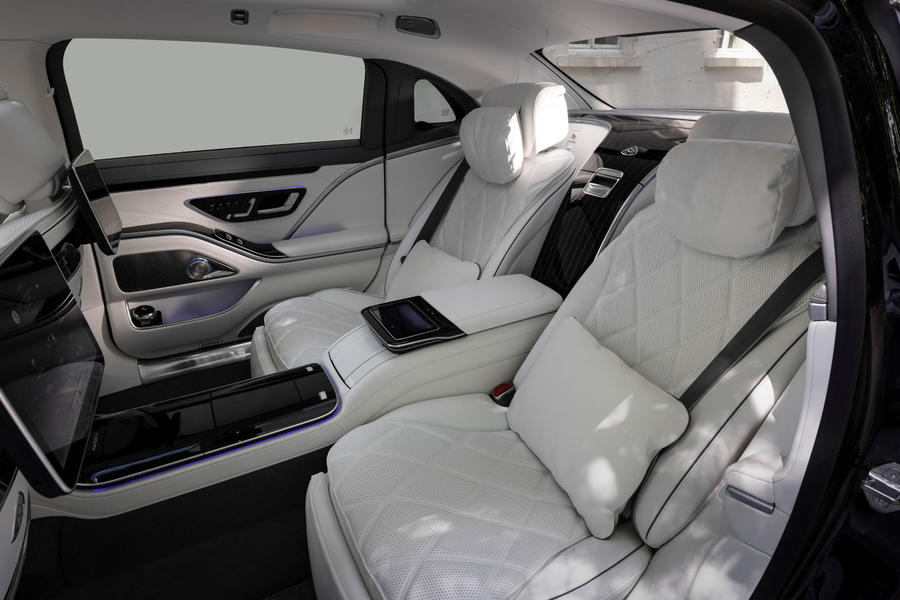 The S680 delivers incredible refinement, strong performance, outstanding roadholding for such a large car, a world-class ride and a truly exclusive passenger experience.

Yet with CO2 emissions concerns at the forefront of the European political debate, it’s surely one of Mercedes’ last V12 models. So if you can happily afford to spend some £187,000 on your next car, we would encourage you to take advantage of it while you still can. 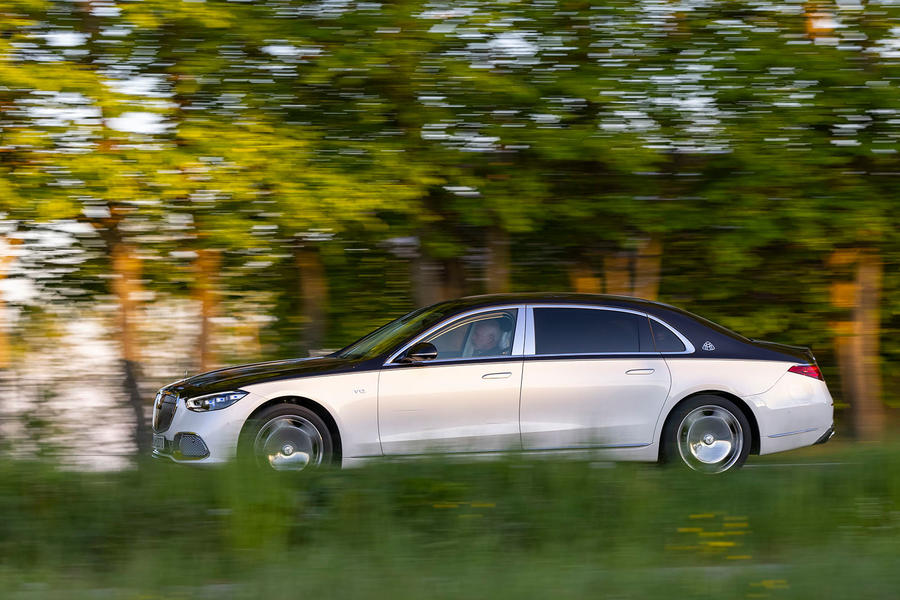 If I could afford a Maybach, I'd buy a Rolls Royce.

What an absolutely awful looking car! It looks like some 80's nightclub on wheels! :-D

The exterior is derivative cookie-cutter Mercedes and the interior is truly dreadful!

Why would anybody buy this tacky, badge-engineered taxi over a proper luxury car?!