Conventional wisdom suggests the world probably doesn’t really need a car like the GLS 600. But when distinguished car makers such as Roll-Royce and Bentley are busy attracting a new generation of customers with their own upper-luxury SUVs in the form of the Rolls-Royce Cullinan and Bentley Bentayga, you can’t expect Mercedes’ upmarket Maybach division to simply look on from the sidelines.

The new leather-lined model sits at the very top of the third-generation Mercedes-Benz GLS line-up, providing the Maybach sub-brand with its first proper SUV, albeit one that shares a lot with its less luxurious siblings. That includes its advanced chassis, which mates the latest generation of Mercedes-Benz’s E-Active Air Matic suspension with a roll-reducing curve function in a bid to provide it with a level of ride comfort and rolling refinement to challenge the high-priced competition.

That said, Mercedes' designers have gone to some lengths to distance the GLS 600 from other GLS models, including the placement of its signature three-pointed star on the bonnet of one of its SUV models for the first time.

It might not boast the overall design uniqueness of the Cullinan or Bentayga, but there’s no denying the visual boldness of the latest Maybach-badged model, which stretches to 5205mm in length, 2030mm in width and 1838mm in height and uses the same 3135mm wheelbase as other GLS models.

Power for the GLS 600 comes from the same mild-hybrid drivetrain used by recently unveiled S580. It mates a twin-turbocharged 4.0-litre V8 petrol engine with a 48V starter-generator integrated into the nine-speed automatic gearbox to provide the new Maybach SUV with 549bhp and 538lb ft of torque.

The reserves are channelled to each wheel via Mercedes' 4Matic system, which operates in combination with a long list of standard driving assistant functions.

Options in the four-seat First Class spec version driven here include a pair of reclining rear seats with a massage function and a fixed rear centre console with folding tables and a refrigerator, a set-up that can be further enhanced with a panoramic glass roof.

A specially developed cargo blind and sound-deadening material within the bodyshell have also been added at the rear to dampen road noise. 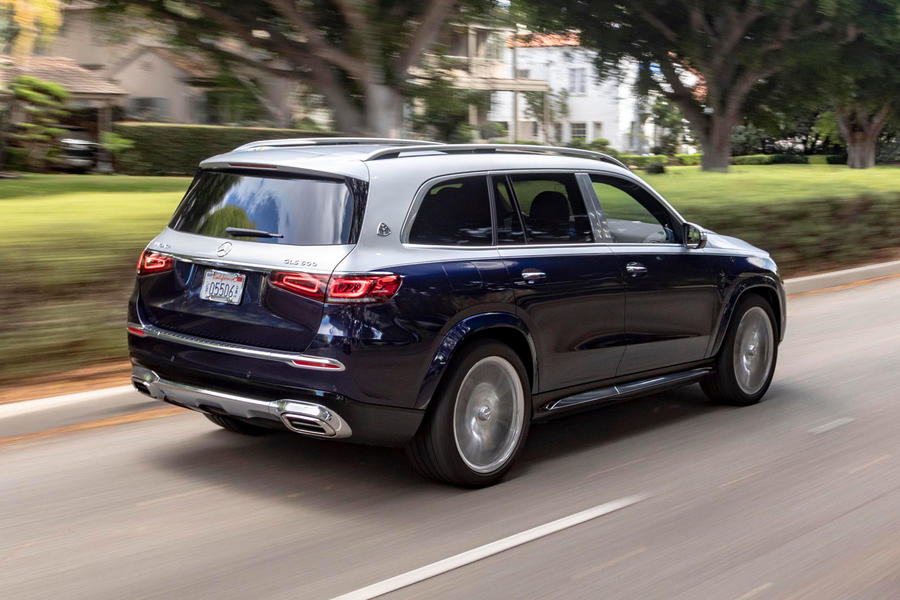 Although Mercedes-Benz has reworked its big US-produced SUV to make it more luxurious and provide it with more traditional limousine-like Maybach qualities, there is no escaping the dynamic links to lesser GLS models.

The new mild-hybrid drivetrain of the GLS 600 is exceptionally smooth and revs freely up to its relatively conservative 6200rpm cutout, providing as much power as you could ever possibly wish for in a 2785kg SUV on public roads, as its 0-62mph time of 4.9sec implies. There’s a true urgency to the delivery, which is very linear in character.

The nine-speed automatic gearbox deploys the combined torque of the V8 petrol engine and electric motor fluently at any speed. A toggle switch on the centre console allows the driver to scroll between driving modes, although despite a dedicated Sport mode, it's Comfort where it always feels at its best.

There is quite a defined woffle to the exhaust, which is not quite as subdued as recent Maybach saloon models. Otherwise, the refinement is superb. There’s excellent isolation of engine vibration through the body structure and any wind noise emanating from the sizeable door mirrors at speed is always well suppressed by the double-glazed side windows. 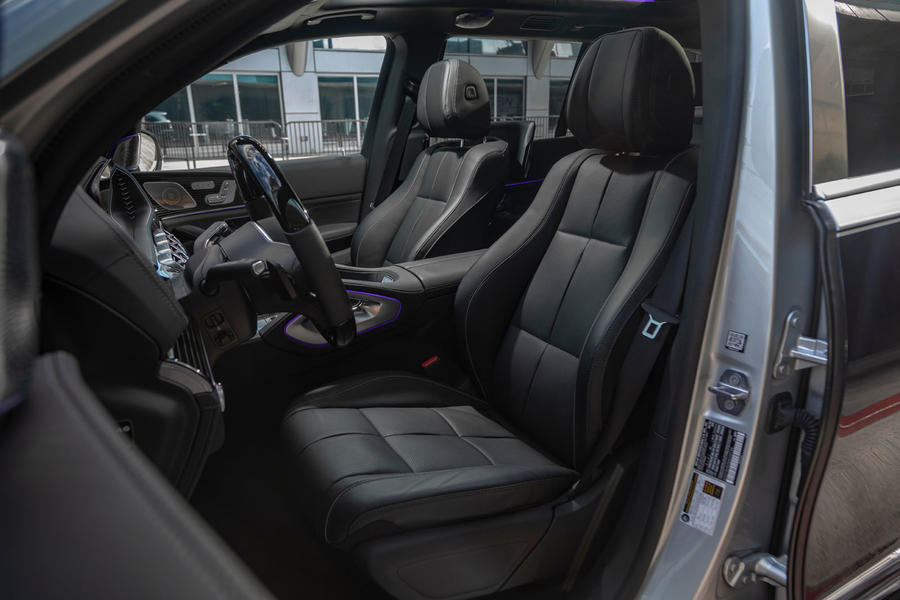 With outstanding traction from the four-wheel drive system and advanced suspension that, in the top-of-the-line form fitted to our test car, mates three-chamber air springs with a tilt function that leans the big Maybach SUV into corners to reduce lateral forces, it also delivers on the handling front.

The speed-sensitive steering is quite light and lacks feedback but it is very precise and smooth in its action. Depending on the mode you choose, the fast-acting suspension ensures body roll remains well in check on even quick changes of direction, allowing the GLS 600 to corner in quite a determined fashion, with strong grip when pushed hard.

Dial up the curve mode and the new Maybach gently tilts in to corners in an action similar to that of a motorcycle rider, giving the car an engagingly fluid feel over winding roads despite its large dimensions and comparatively high centre of gravity. It’s no sports car, granted, but the cornering speeds generated by the GLS 600 are very impressive indeed.

Its biggest achievement, though, is the ability of its suspension to absorb severe bumps with outstanding control and compliance, even on the 22in wheels of our test car.

All this gives Mercedes' flagship SUV outstanding long-distance cruising qualities, where its inherent calm and poise help to provide its occupants with a level of well-being unmatched by any existing GLS model. 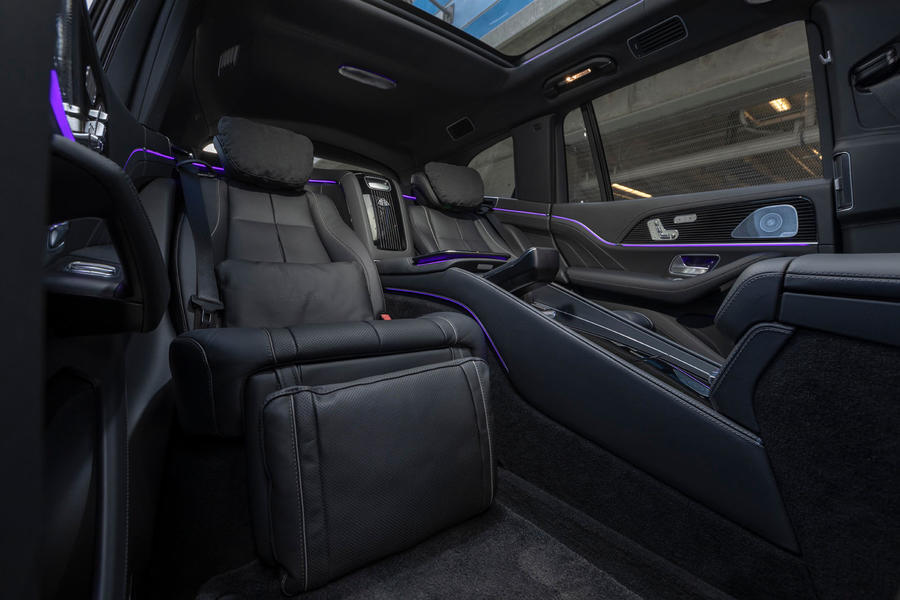 The GLS 600 has been given impressive credentials in the form of solid performance, handling prowess that belies its size and weight, an outstandingly smooth and cosseting ride, exceptional refinement and a spacious and luxurious interior that, while not to everyone’s taste, is big on comfort and calmness.

Despite Mercedes' best design efforts, though, the big Maybach SUV is too closely related to the standard GLS, both externally and internally, to be considered a stand-alone model in its own right.

At £167,735 – over £90,000 more than the GLS 400d for those doing the sums – you’d be forgiven for expecting more individuality and, frankly, something with the uniqueness of the Cullinan and Bentayga. 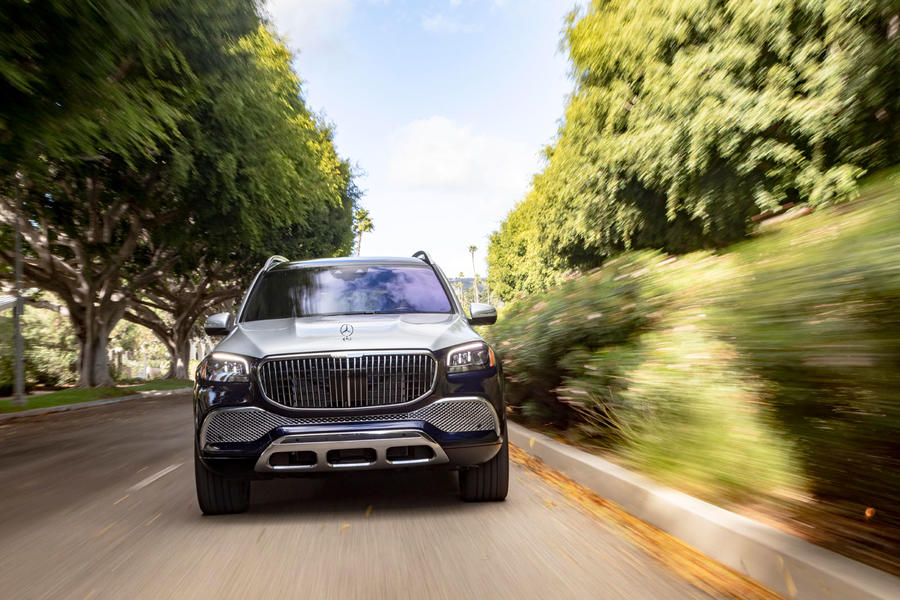 Looks better than the Bentley alternative from the outside, however what on Earth doesn't -- inside looks comfy; however I suspect to the audience -- Mercedes lacks the class credentials. That being said, the second row seating only 2 isn't the perfect show-case for practicality. The market in mind appears hence be -- chauffeur driving 2 plutocrats behind.  The large grill, appears to indicate -- Asian preferences, hope to appeal to Asiatic plutocrats. Wether that works who knows, that being said -- had I the mony; this kind of barge irrespective of make wouldn't be on my shopping list.

Looks great inside and out, but the interior is truly next-level.  Perfect family car if I had loads of cash.

This is the most disgusting thing on wheels apart from any other maybach labeled product looks like a bad party bus inside.

its just not as appealing as others in its class