From £78,5108
Share review
The latest version of the self-styled S-Class of SUVs is bigger and more luxurious than ever. Can it finally live up to its billing?
Open gallery
Close

When the seven-seat GL-Class was renamed the GLS as part of a mid-life facelift in 2015, it was done, in part, in order to define it as ‘the S-Class of SUVs’.

Given Mercedes-Benz fancies the S-Class as the best car in the world, that’s a lofty goal – and one that, regardless of moniker, the outgoing GLS simply couldn’t live up to.

With the competition growing increasingly fierce in the premium SUV category, from the new BMW X7 to the Audi Q7 and the ever-popular Range Rover, Mercedes-Benz has set out to ensure that this new third generation of the GLS lives up to the strapline created for it.

It has done so with a focus both on improving the driving dynamic of the large SUV and by cramming in the latest tech and even more luxurious comfort. 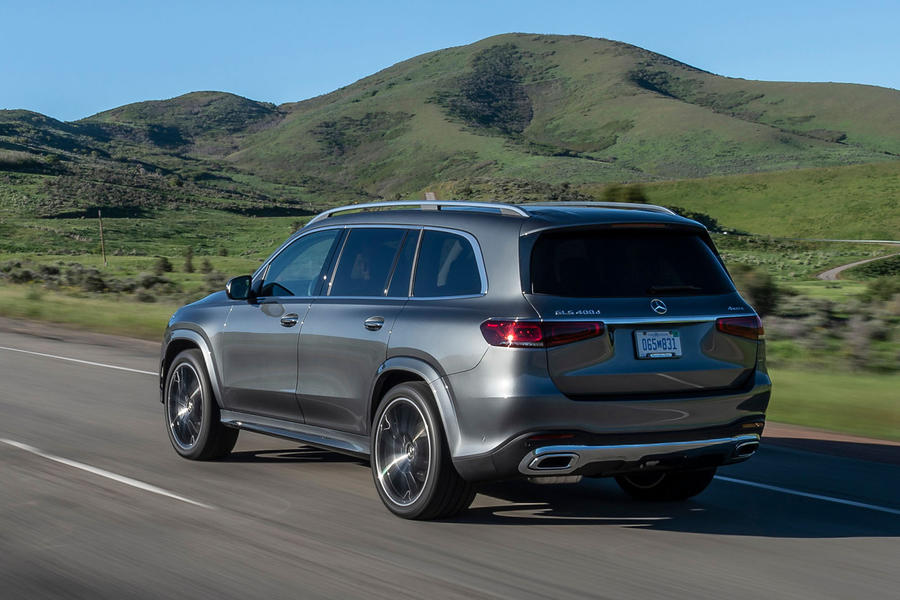 Mercedes has been especially keen to improve the sense of luxury inside the car, particularly for those in the back. The firm has certainly packed in the S-Class-esque luxury features, with five-zone automatic climate control, touchscreens available in the second row and a whopping 11 USB ports. Mercedes claims up to 87mm more leg room in the second row, which can be fitted with either a three-seat bench or two luxury seats. Even the optional third row (which, Mercedes says, can fit adults up to 1.94m tall) features heated seats.

Certainly, the rear of the cabin feels spacious, with the caveat that adults might find the rearmost two seats a bit of a squeeze for long periods. Still, those buying the GLS to be chauffeured in comfort will probably stick to the second row, which is offered with a three-seat bench or two individual seats.

In seven-seat form, the GLS houses a 355-litre load bay, rising to 2400 litres with the second and third rows folded (which can be done at the touch of a button).

Predictably, increasing the interior space has involved Mercedes making an already big SUV even bigger: at 5213mm long, the new GLS has grown by 51mm, making it 62mm larger than the BMW X7.

Thankfully, Mercedes didn’t feel the need to supersize the grille of the GLS as BMW did with the X7 – with the GLS looking very much like a larger version of the recently revamped GLE. It’s well proportioned, but its sheer presence is hard to disguise when you see one up close.

Still, in the wide open spaces of our test location in Utah, and on roads generally built to accommodate supersized pick-up trucks, the GLS hides its size surprisingly well. You quickly become adjusted to it when behind the wheel, helped by the machine’s phalanx of cameras, sensors and other driver assistance systems. That said, we suspect its dimensions might cause some nervous moments on the UK’s tighter roads.

Although there has been considerable focus on passenger comfort, Mercedes hasn’t forgotten about the driver. Given its size and kerb weight (2490kg), the GLS handles relatively nimbly, aided by the smooth ride of the air suspension, a system suited to a car of this bulk.

It likely helped that our test car was fitted with 21in tyres and Mercedes’ E-Active body control system, which constantly scans the road and can adjust the suspension settings to suit. Neither will make it to the UK, with 22in tyres standard and the E-Active system not being offered on right-hand-drive cars yet.

A run in a GLS 580 without the E-Active system (and powered by the 4.0-litre V8 mild-hybrid petrol engine that sadly won’t be offered in the UK, either) suggested that the ride was marginally hampered without when tackling sharper corners or rougher roads.

The sole engine destined for Britain at launch will be a 325bhp 3.0-litre diesel. Once the initial effort of getting the hefty GLS moving is done, it offers brisk progress, with plentiful power and torque on tap when needed. It’s quiet, and well suited to the sort of mileage GLS buyers are likely to be doing. European fuel economy ranges from 28.9 to 32.8mpg on the WLTP cycle (the final UK figures are yet to be determined).

Regardless of powertrain, we suspect GLS buyers are unlikely to do too much off-roading, although Mercedes engineers have expended considerable effort on ensuring it can tackle tough trails with aplomb. Selecting the optional £1495 Off-Road pack gives the GLS extra drive modes, a low-range transmission option and a torque on-demand inter-axle locking system, which made relatively easy work of the mountainous Utah ATV trails we were invited to try it on. 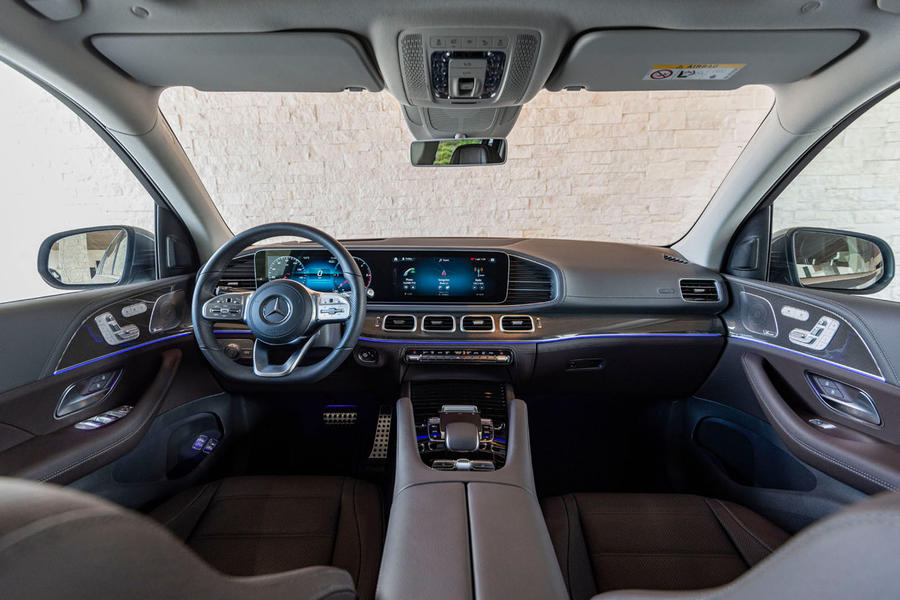 Predictably, the GLS doesn’t offer the last word in dynamic on-road performance, simply because it’s a huge, heavy SUV, and for all the gadgetry fitted to it, Mercedes-Benz’s engineering whizzes have yet to fully overcome the laws of physics. But as a luxurious, mile-munching and spacious cruiser, it certainly delivers.

The greatly upgraded interior alone brings this new GLS closer to realising its billing as the S-Class of SUVs, even if it isn't rounded enough to fully achieve that. And, with the caveat that we’ve yet to drive it in the exact spec in which it will be offered to UK buyers, Mercedes has done a good job of making it feel nimbler to drive than its size suggests.

If you’re looking for a cavernous slice of on- and off-road luxury, this new GLS is certainly at the sharp end of an ever-growing cast of rivals. UK buyers might just want to pause to ensure it will fit down your street, though. 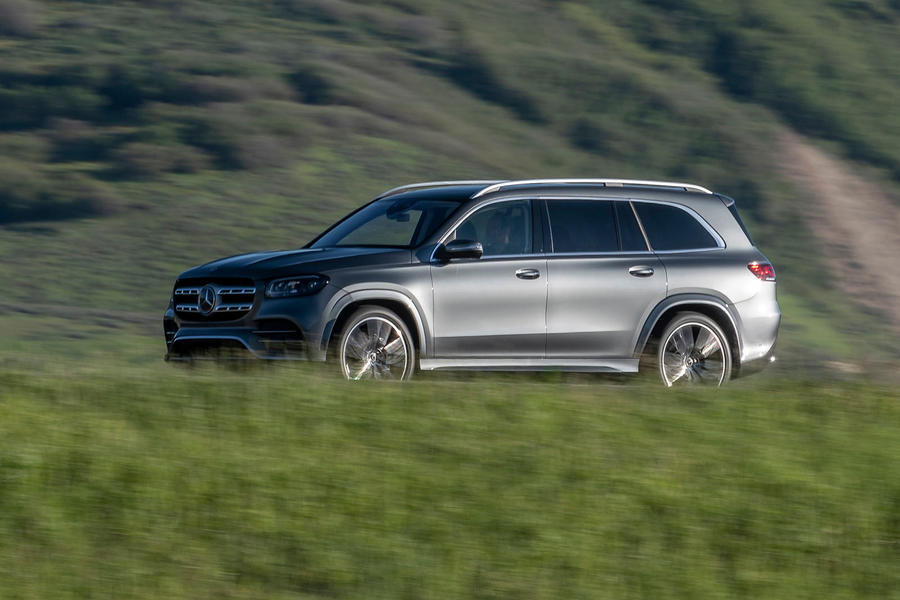 I would willingly pay to

I would willingly pay to access a version of this site that excludes SUVs in all forms, save those with a genuine off road primary purpose.

All these huge bloated Chelsea Tractors should be made illegal or at least hammered into oblivion with sky high taxes.

No one needs such an excessive behemoth.

If you want a car that has

If you want a car that has all the attributes of an S Class. Then buy an S Class.

This thing is a monstrosity.