From £25,8006
Mercedes’ PHEV fleet champion hatchback makes a fairly convincing short-range EV but there are some important caveats beyond that
Open gallery
Close

Mercedes is not a firm to do things by halves these days.

While many of its rivals have only two or three models in the plug-in hybrid (PHEV) arena so far, Stuttgart is already closing in on double figures. And while that’s counting petrol- and diesel-engined derivatives separately, it’s not counting saloon, hatchback, estate and coupé bodystyles individually. There are already PHEV versions of the C-Class, E-Class, S-Class, GLC and GLE, and more are arriving.

The firm is now well into a second wave of these fleet-friendly, company-car-tax-saving models, having partly rebranded them under the EQ Power umbrella last year. And it has just introduced to the UK market the smallest and cheapest of them all, which also has the potential for the greatest fleet success: the A250e.

By levering a relatively large lithium ion drive battery (15.6kWh gross capacity) under the rear cabin floor of an A-Class hatchback, Mercedes has created a company car here that can be bought for less than £33,000, with 100% of that cost able to be written down against tax by fleet operators as a capital allowance in the first year of ownership; and that, thanks to its sub-50g/km emissions and 40-mile-plus electric range, is the only plug-in hybrid of its kind that currently qualifies its ‘owner’ for super-low 6% benefit-in-kind tax.

That means, for an employee at least, that running one of these as a company car would currently cost you less than half the monthly outlay you might pay for a low-end, petrol-powered Ford Fiesta. Not that many companies will be running too many fleets of non-hybridised Ford Fiestas for very much longer, you’d imagine.

The A250e is now on sale in the UK as both a five-door hatchback and a four-door saloon, and its powertrain will shortly become available in the taller and more spacious B-Class as well. Combustive power comes from the 1.3-litre four-cylinder turbocharged petrol engine that Mercedes developed in collaboration with Renault-Nissan (it also powers the A180 and A200 petrol models) and drive is sent to the front axle through an eight-speed dual-clutch automatic gearbox. 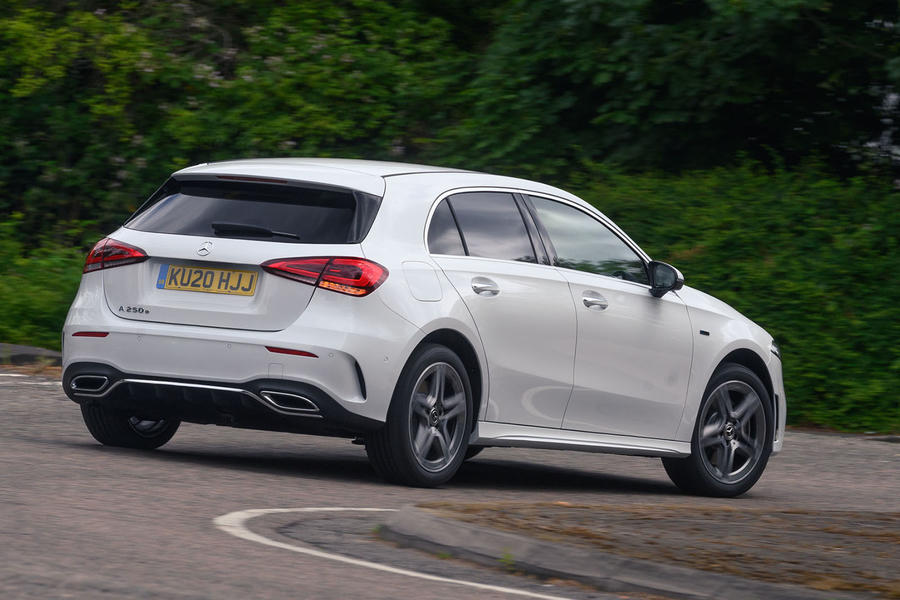 A fairly short drive in a prototype late last year suggested that, much as this car has a lot going for it on paper, the A250e isn’t the simplest or the slickest plug-in hybrid to drive - and this test on UK roads confirmed as much. Some complication of the driving experience is to be expected as an unavoidable consequence of choosing an electrified powertrain like this; but even compared with other PHEVs, this car’s drivability foibles are many and various, and its ‘premium’ motive qualities are somewhat unconvincing.

The A250e is at its best when running as an EV - which it can do for longer and farther than many of the cars with which you might compare it. That 44-mile WLTP range translated into just over 30 miles of range in mixed real-world use during our testing. That may not sound like much, but the fact that the car comes with a 7.4kW on-board charger (twice as powerful as many PHEVs get) means you can refill its battery from a fairly common seven-pin AC charging post in less than two hours, in the time it might take to amble around the shops or to have that meeting.

You get the abiding sense that short-range-commuting A250e owners with driveways on which to charge their cars could probably go for weeks, if not months, without using any petrol in this car. That’s a sense that not all PHEVs give you, by the way - enabled as it is not only by the A250e’s electric range but also by how drivable and swift it is when operating in electric mode. Having performance tested it for an upcoming full road test, I can tell you that, much as the car needs less than seven seconds to hit 60mph from rest when running in Hybrid mode, it’ll do the same sprint in less than 13 seconds without burning a single hydrocarbon.

The car’s electric motor is particularly torquey and, positioned as it is upstream of the gearbox, benefits from being able to run at lower rotational speeds on the motorway and around the national speed limit than it might otherwise. That, in turn, gives the car a broad performance envelope in EV mode, and so it’s easy to keep the the car’s reciprocating pistons quiet and still when you want to, even out of town.

Having learned from its experience with the EQC, Mercedes allows you to choose from several energy recuperation settings by flicking the car’s shift paddles. Holding down the right-hand paddle effectively puts the car in a ‘coast’ mode in which you get no recuperation at all on a trailing throttle. A couple of flicks of the paddle on the left, however, and you’re in a ‘max regen’ setting in which the car can be driven pretty widely in ‘one-pedal’ style. 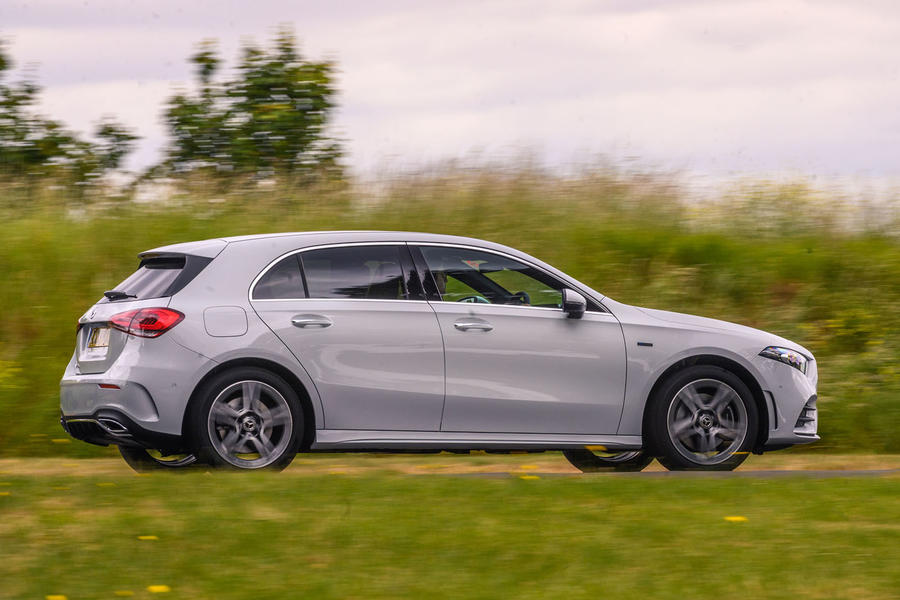 There’s also an ‘auto’ regen setting to which the car defaults - not just in electric mode, but in others as well - in which it seeks to regulate brake energy recuperation for itself based on data coming from the navigation system and on what it can work out about your distance to the car in front using its forward sensors. Mercedes isn’t alone in trying this as a means to boost energy efficiency - although rarely do you find it integrated independently of an adaptive cruise control system (something the A250e only gets as an option).

It’s a problematic execution mostly because, when the car is running in Hybrid mode, the brake pedal becomes unpredictable. With the car’s tendency to coast defined entirely automatically, you’re never totally sure how much ‘engine braking’ you’re going to get when you lift your right foot on approach to a junction or roundabout; or, indeed, how much ‘recuperation’ the car is going to do for itself in stop-and-go motorway traffic.

With that abiding sense of uncertainty present, the A250e then presents you with one of the least progressive and intuitive brake pedals this tester has ever encountered. I’ve known cars that ‘prime’ the brake pedal when the frontal crash avoidance system thinks you may be in danger of an accident, with knock-on effects on pedal feel; but this A-Class’s ‘blended’ brake pedal seems to juggle electrical recuperation in and out of the initial pedal travel, and ramp friction braking response up and down, with widely unpredictable results. Perhaps it does make the car a smidgeon more efficient and maybe it will help you avoid an accident one day. Frankly, I’d much rather the car had simply been smoother and easier to drive.

Running under a mix of electric and combustion power, the A250e has Individual, Sport, Comfort and Eco driving modes. It has good initial throttle response in all of them, although the way the piston engine and eight-speed gearbox somewhat lazily respond to bigger pedal inputs in the more laid-back modes might make Sport your default choice for quicker out-of-town motoring.

The car’s outright performance level is strong, particularly when picking up from lower revs in higher manually selected gears, when all that electric motor ‘torque fill’ is poured in. The fairly hard-working 1.3-litre engine doesn’t like revving hard, though. It’s noisy and harsh beyond 4000rpm and, more than anything else, that is what’s likely to limit how interested you’ll be to drive this car with any enthusiasm.

The car has passive suspension whose tuning doesn’t change with those driving modes. It’s sprung a little softly so is fairly comfortable on the motorway and when dealing with bigger undulations around town. It suffers with particularly poor ride isolation, though, conducting lots of road roar into the cabin.

Poor vertical body control can make the A250e feel heavy and a little under-damped at pace. Body control is reasonably well contained when cornering, and handling is precise enough up to a point; but mechanical grip levels are somewhat meek under higher lateral loads and the car’s composure can run short as it scrabbles for traction under acceleration. 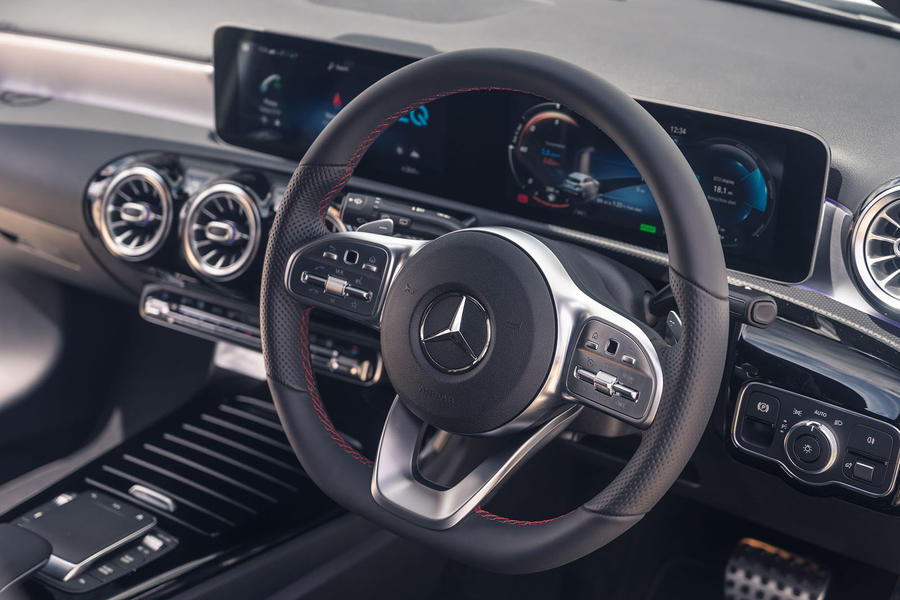 While it’s fairly wieldy and tidy enough at everyday speeds, beyond those speeds the A250e ultimately begins to handle like the relatively heavy, mechanically complex front-driven hatchback it is; something for which we can, in light of its specific brief, perhaps forgive it. But the car’s lack of refinement, smoothness and easy drivability are bigger problems for it. We naturally expect to find those qualities in a Mercedes and other PHEVs do notably better in those respects.

If that 6% benefit in kind liability puts this plug-in hybrid clear at the top of your company car shopping list - and right now, it may well do - there is certainly evidence here to suggest tempering your enthusiasm for it a bit. Test drive one, for sure, before committing years to commuting in it. If you can, try before you buy.

There’s a chance that the A250e’s dynamic quirks won’t bother you as much as they did me; but there’s also a good chance they’ll frustrate the hell out of you. Equally, you could be so impressed with what it’ll do to electrify your day-to-day motoring life that you’re willing to overlook so much else about its driving experience in other modes.

It is undoubtedly true that, as a short-range EV, this car does an awful lot well. But as a thirty-something-thousand-pound A-Class, it has some pretty clear limitations. 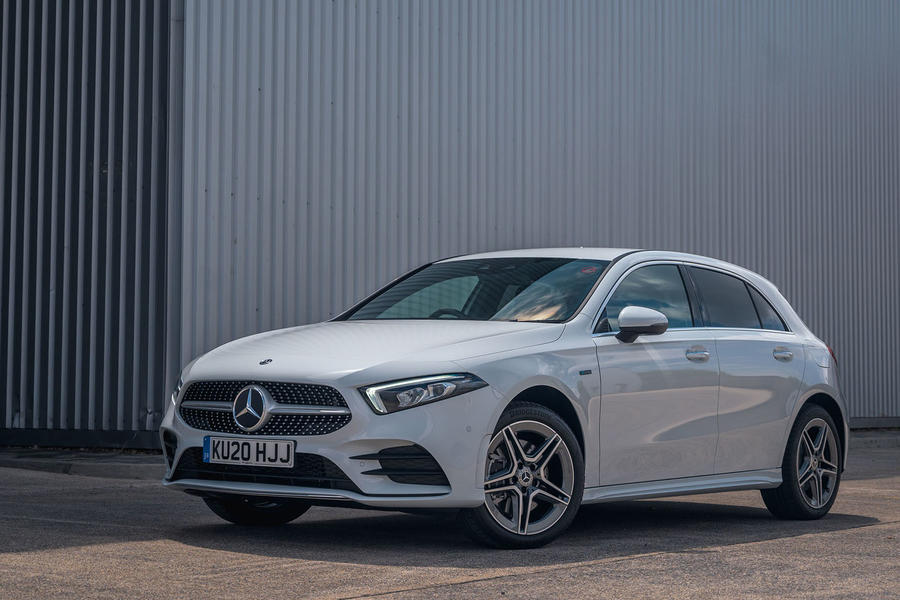 The phrase "tax cheats" implies that a business user who buys one of these is somehow defrauding the Inland Revenue? Totally incorrect. The tax levels are set by the Government in line with the IR and the low tax implication on this car is to persuade people to buy it. I currently have a company provided 67 plate Mercedes C220d on which I pay nearly £400 a month BIK regardless of whether I drive it a thousand miles a month for personal use or five miles.

It will be good when the new A250e arrives, it'll save me a fortune in BIK every month, I'll be doing away with the C220d which pumps out a lot of emissions and helping just a tiny bit to make the planet a cleaner place.

Half of the review is about the "unpredictable" break pedal, which can be fixed by selecting one of the predictable modes.
Makes me free this reviewer had an agenda and it wasn't too give an unbiased opinion.
Ad99 25 June 2020

The EU don't set BIK rates. If there wasn't such an incentive for company car users these cars would not sell.

Three neighbours have PHEVs. Never seen them on charge, maybe they charge them at work?

The EU don't set BIK rates. If there wasn't such an incentive for company car users these cars would not sell.

Three neighbours have PHEVs. Never seen them on charge, maybe they charge them at work?

Everyone knows that Plug in hybrids are just tax cheats for business users.

Only poor plebs pay taxes, rich get all of the loopholes and write-offs...