From £98,7608
It's the slower and cheaper of the two AMG GT Roadsters, but these adjectives are harsh given this excellent open-top's broad range of talents
Open gallery
Close

The new GT Roadster returns an open-top to the upper end of Mercedes-AMG’s line-up, acting as an indirect successor to the earlier SLS roadster.

The latest in a long line of recent AMG models, it will be sold in two distinct flavours: this, the standard Mercedes-AMG GT Roadster, and its faster, pricier sibling, the GT C Roadster, which is derived from the GT S coupé.

The GT Roadster costs from £110,145, and while that's £11,950 more than Mercedes-AMG asks for the cheapest of its fixed roof siblings, the Mercedes-AMG GT coupé, it still undercuts the price of its nearest rival, the Jaguar F-Type SVR Convertible, by £3650. In comparison, the GT C Roadster will set you back a cool £139,445.

Mercedes-AMG says the GT Roadster was conceived at the same time as the Mercedes-AMG GT coupé, so isn't a mere afterthought, despite the fact that it has arrived more than two years after its fixed-roof sibling. This is reflected in its styling, which is richly cohesive, both roof up and down.  This styling, including the 'Panamericana' grille, first introduced on the range-topping GT R coupé late last year, have resulted in a very good-looking car.

The only real difference in styling between the two GT Roadsters is at the rear, where the GT C Roadster is 57mm wider, due to it having the same, sportier bumper of the GT R coupé.  This allows it to run larger 20in rear wheels and thicker tyres than those wrapped around the GT Roadster's 19in rims. 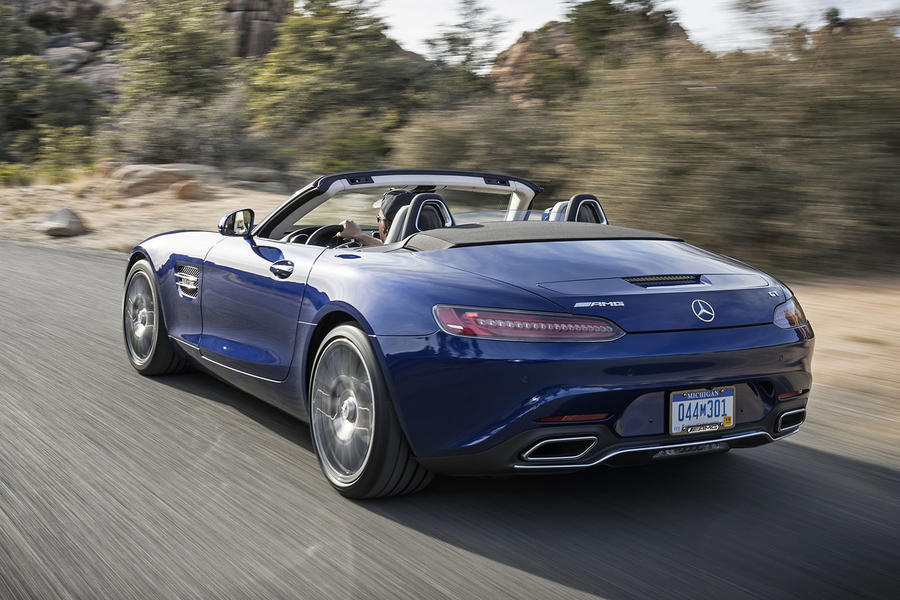 The GT Roadster has an automatically folding fabric roof. It's a three-layer structure, available in black, red or beige, that is supported by a frame made from aluminium, magnesium and steel. It opens and closes in just 11sec while you're driving at speeds up to 31mph, folding and stowing over the rear bulkhead behind the two seats.

To offset the reduction in rigidity due to the loss of a fixed roof structure, the GT Roadster's aluminium body is stiffened with thicker sill elements, an additional dashboard support and a new aluminium cross-member integrated into the rear bulkhead that supports for fixed roll-over bars.

Under the bonnet is a lightly revised version of the twin-turbocharged 4.0-litre V8 petrol engine first used in the standard Mercedes-AMG GT coupé, but with 13bhp and 21lb ft more than in that car, producing a total of 469bhp and 464lb ft.

That's 80bhp and 37lb ft shy of the more heavily tuned version of the same engine run by the GT C Roadster, and also a considerable 106bhp and 52lb ft less than the larger supercharged 5.0-litre V8 petrol engine of the F-Type SVR Convertible.

The GT Roadster has the same seven-speed Speedshift dual-luth automatic gearbox as the Mercedes-AMG GT coupé, but again it's slightly altered, with higher first and lower seventh gears, as well as a lower final drive. It also gets a Dynamic Select controller with four driving modes as standard: Comfort, Sport, Sport Plus and Individual. Reflecting its more serious performance nature, the GT C Roadster adds a fifth mode: Race.

Optional extras on the GT Roadster include a £4195 Premium equipment pack, which includes keyless entry and start functions, a reversing camera and stainless steel door sills; a £3895 carbonfibre package; and £395 yellow seat belts. Electronic safety aids are also available, with a £595 package that adds lane keeping and blind spot assists, while the £1695 Driving Assistance package adds adaptive cruise control and a pre-safe system that prepares the car for an accident if an imminent collision is detected. 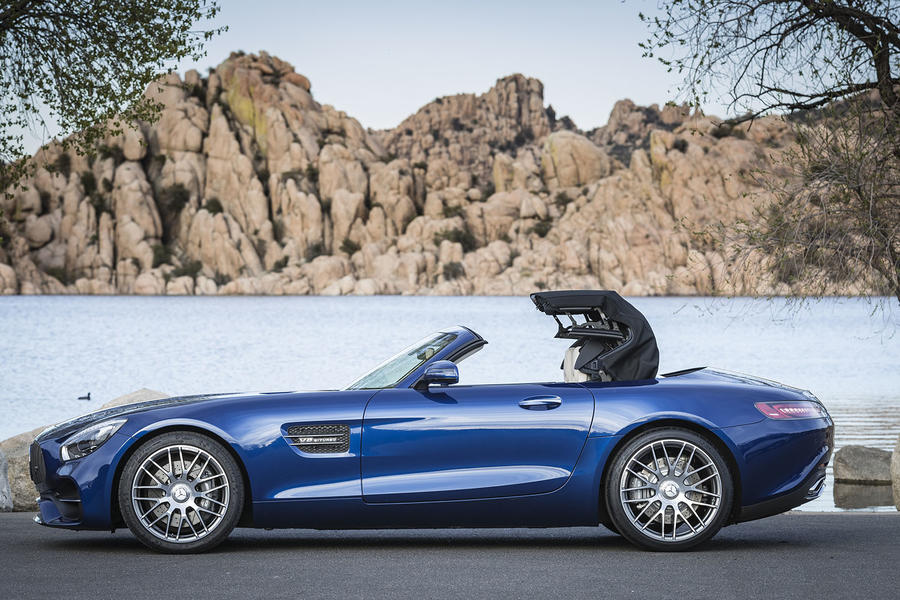 This is 0.3sec and 8mph down on the considerably more expensive GT C Roadster, and it's also in the shadow of the F-Type SVR Convertible, which has official figures of 3.7sec and 195mph respectively.

You can forget the headlining performance figures, though, because the GT Roadster’s main attraction is its broad spread of ability. Its engine, for one, has plenty going for it, not least deliciously accessible low-rev flexibility. In Comfort mode, the strong torque and excellent part-throttle responsiveness of the lightly upgraded V8 provide marvellous low-rev tractability and easy driving around town.

But in Sport Plus mode, its true potency is revealed. Throttle response is outstanding, and there’s next to no turbo lag as you unleash its reserves in full, with power growing progressively and in a very linear fashion from not much more than 2000rpm all the way to its 7000rpm cut-out. All this endows the GT Roadster with captivating in-gear qualities and a heady rush of acceleration.

Backing up the sheer strength the engine is the rapid-fire gearbox, the overall shift speed and inherent smoothness of which have been vastly improved, especially at higher engine speeds in manual mode, over those of earlier incarnations of the Getrag unit in the Mercedes-AMG GT coupé. This broad scope of driving attributes is very much part and parcel of the GT Roadster’s appeal. One minute, it’s a consummate boulevard cruiser, and with the mere turn of a dial, it becomes a rabid mile-eating supercar.

With the optional AMG Performance exhaust system, as fitted to our test car, it’s not short of aural drama, either. In Comfort mode, there’s an enticing baritone pulse to the exhaust, which grows increasingly more urgent and louder as the revs rise. Switch to Sport Plus, which opens flaps in the exhaust system to increase its volume, and the already serious sounding exhaust note immediately becomes more aggressive and vociferous, with a prolific and all-enveloping bass-driven blare under throttle that is interspersed by rapid crackles on the overrun.

Happily, the lack of a roof structure has done little to spoil the GT Roadster's handling qualities, or its inherent liveliness. In Sport Plus mode, it turns in to corners with the same engaging enthusiasm as the Mercedes-AMG GT coupé. The variable ratio steering lacks the rear-steer function of the GT C Roadster, but it's still extremely direct, quite weighty and pleasingly communicative. 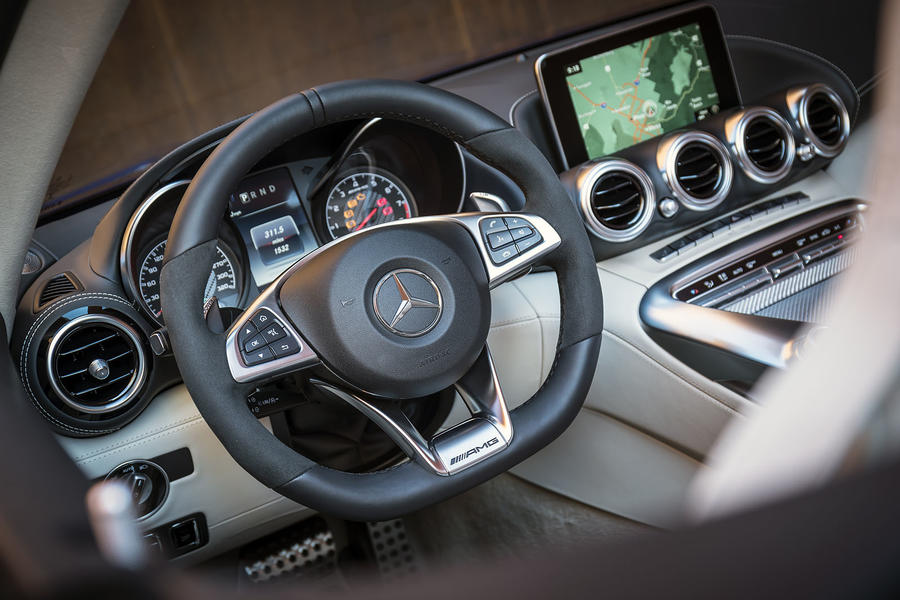 This, and the exceptional grip from the standard Michelin tyres, makes the GT Roadster corner in a determinedly neutral fashion. Yes, it is 50kg heavier than the Mercedes-AMG GT coupé, but the added weight has done little to alter the ability of the front end to hold its line when approaching a tight apex.

Push hard enough and it will understeer, but the limit at which the generously profiled front tyres relinquish their purchase is very high. A well-timed lift of the throttle can get you some manageable tail-out when the electronic stability control (ESC) system is switched to one of its more spirited settings, or you can simply adjust the line by trimming the throttle mid-corner before relying on the terrific traction from the rear and the standard mechanical locking differential for stomping exiting speed.

The GT Roadster sports suspension with fixed rate damping, but it can optionally be specified with the AMG Ride Control set-up with adaptive damping that comes as standard on the Mercedes-AMG GT C Roadster.

The standard suspension is outstanding given the standard of performance on offer. Bump absorption is well controlled, with ride quality being satisfyingly compliant in Comfort mode. It does become a little harsher when you ask for the added body control of the Sport and Sport Plus modes, but that's to be expected.

The brakes are massively powerful, with a lovely pedal feel and excellent resistance to fade.

But what of the drawbacks brought on by the adoption of the soft-top roof? If there is a loss of structural integrity, it is rarely, if ever, felt. You can drive the GT Roadster all day without detecting any real scuttle shake, even on poorly surfaced and undulating roads. The Mercedes-AMG GT Roadster doesn't quite match the GT coupé for outright cornering prowess or overall ride control, but it isn’t likely to disappoint or turn off anybody who already has their heart set on buying one.

With the roof down, windows up and the small plastic wind deflector erected between the roll-over bars, there is fair bit of wind buffeting inside. Raise the roof and it is almost but not quite as cosseting as the Mercedes-AMG GT Coupé. As with lesser Mercedes-Benz open-top models, the GT Roadster can also be ordered with the AirScarf system, which uses a vent mounted within the headrests to project warm air to the neck of the driver and passenger in three levels of intensity. 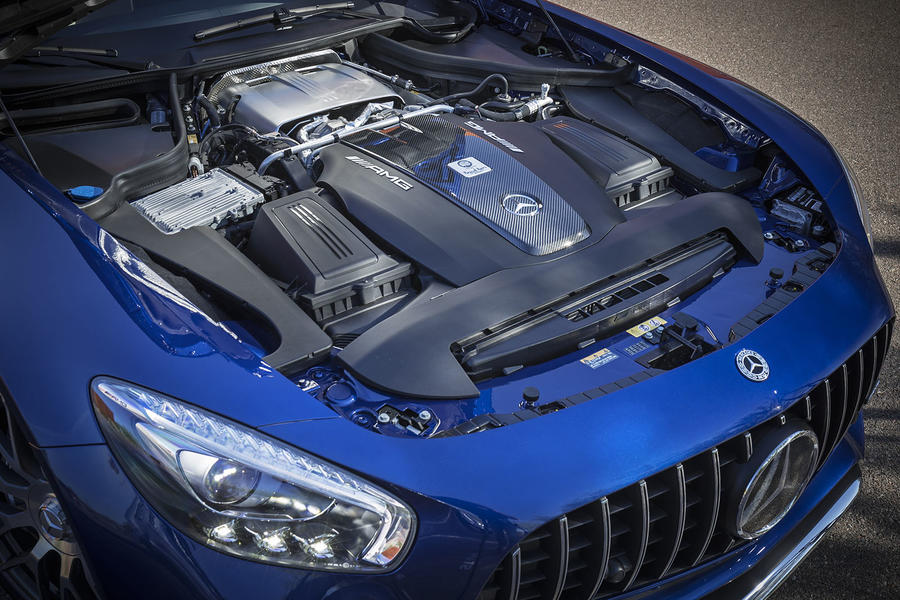 Other than its price tag, it’s hard to think why you wouldn’t want one sitting in your garage.

Those prepared to accept that the structural disadvantages brought on the by the open-top roof mean it is never going to deliver quite the same driving experience of the Mercedes-AMG GT coupé will find it plausibly good.

The GT Roadster can become a little wearing at constant speeds over longer distances due to a relatively high amount of road noise over coarse road surfaces, and it can be difficult to manoeuvre around tight spaces due to its elongated bonnet and poor rear vision. But these are but small compromises in what is a great looking and highly desirable open top.

And although its responses are not quite as intense or as enthralling as its fixed-roof sibling, it is nevertheless as involving and absorbing as any rival convertible over any given road. It is also very close on overall ability and appeal to the £29,300-dearer GT C Roadster.

This review has a

This review has a disappointing cut'n'paste feel compared with Matt Prior's much more enlightening and thoughtful piece. It seems the roadster is dynamically superior than the coupe in almost every way - at least for now.