From £139,8558
Latest Mercedes-AMG GT C brings the usual noise and drama, and adds a dose of poise that wasn’t always there
Open gallery
Close

The bloke in charge of the way the new Mercedes-AMG GT C coupé drives is called Markus Hofbauer. He used to work at Porsche, and that he prefers a 911 Turbo to a 911 GT3 tells you more than a little about the Mercedes-AMG GT range.

It’s in the way the 911 Turbo goes about things, see; and Hofbauer knows, because he helped engineer 911 dynamics before he moved to AMG. You don’t have to be absolutely ‘on it’ all the time to make decent progress in a 911 Turbo. It’s fast, but secure and unflappable.

Which brings us to the car Hofbauer is actually here to introduce to us today: the Mercedes-AMG GT, which has, conveniently for the purposes of this article, become available in C specification as a coupé, almost completing the two-door GT range.

A quick recap. The GT is the second 100% AMG sports car, following on from the SLS. It’s a two-seat coupé and roadster, with an engine in the front and drive to the back, where sits a seven-speed dual-clutch transaxle, driving the rear wheels.

You can have a GT in base form as a coupé and roadster, which has 496bhp; or you can have it in S form, which adds an electronically controlled limited-slip differential in place of a pure mechanical one, and has 515bhp - though that only comes as a coupé.

Finally, there’s the GT R, AMG’s answer to a 911 GT3 (or Turbo), if you like, only not limited in production, making 576bhp, and available as a coupé only. AMG could make a roadster, but probably won’t. At least, Hofbauer would prefer it if they didn’t, but knows that given the GT C has the same chassis settings in both coupé and roadster form, they wouldn’t have to ask for his help to tune an R roadster anyway.

Which just leaves the S model looking oddly unfinished, because it’s the only standard variant unavailable as a roadster. Will one arrive? Perhaps. I think AMG looks at the gradual roll-out of Porsche models, and the publicity that comes with them, a little enviously. So there might be a few more words on it here in a few months.

But back to that 911 comparison. The AMG GT range, across these six models, is now, like 911s, meant to offer something broadly rather appealing: a base roadster for boulevardiers, up to an R for track enthusiasts, albeit all off of fundamentally the same 4.0-litre, twin-turbocharged V8 engine and gearbox.

There are some alterations inside as you move up the GT range – the R will offer you harnesses, for example, while the base models get the softer furnishings, but fundamentally there’s not so much between them. Just a cabin that looks and feels well-finished, with the full gamut of Mercedes’ entertainment and info systems, pleasingly laid out.

There are perhaps a few too many buttons on that big transmission tunnel, which, combined with the letterbox view out over a long bonnet, makes the GT feel quite the muscle car, in its way: you sit near the back, overlooking the lengthy nose.

It’s a welcoming, soothing, evocative interior, albeit one that’ll be cramped for taller drivers – mysteriously, because this is a big car. I suppose it’s because it’s mostly aluminium. The Jaguar F-Type, similar of layout, isn’t immune from the same thing. 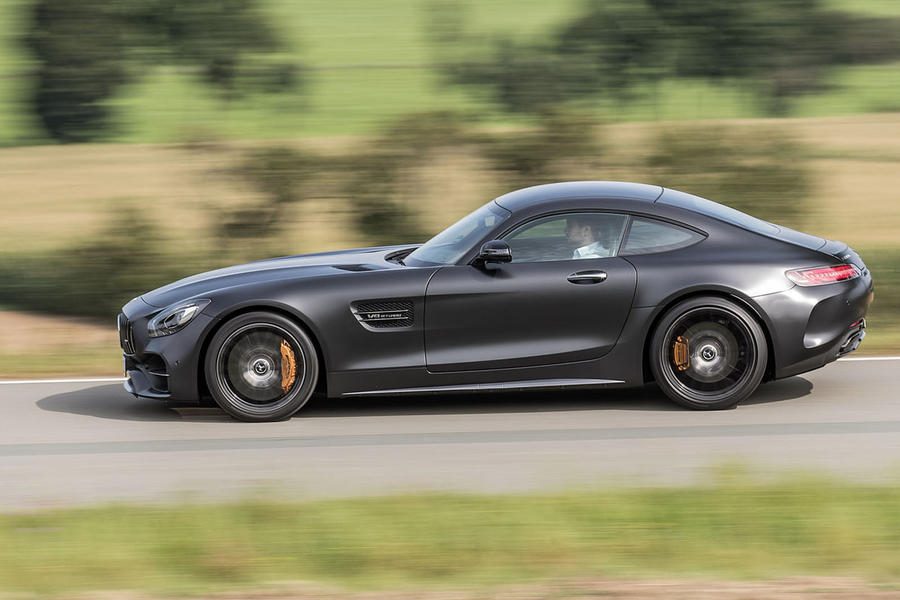 The C sits closer to the top than the bottom of the GT range. It gets wide bodywork like the R, essential for enclosing the wider rear track – which comes from wider wheels, rather than any fundamental suspension alterations. And like the R, there is active rear steering and a great deal of – for want of a better word – ‘stonk’.

Once, that was the most part of what AMGs had. Lots of shove in a straight line, and only a little finesse in corners. AMG was a maker of German hot rods. Today, that’s less the case, thankfully. Oh, there is still plenty of straight-line speed, you understand, and noise, and grunt. Don’t think there isn’t. AMG’s move to turbocharged engines hasn’t come at the expense of sound. Prod and poke at the buttons above the propshaft until you hit on the ones that make the engine into its most responsive mode and the exhaust its most laissez-faire one, and it’ll growl like good ol’ American iron under acceleration and bang like a firework display’s finale on the overrun.

And that would be very amusing even if were all the GT C had to offer, which it isn’t. But it does give you a sense of where this car comes from. Sitting closer to the rear than front axle, as you do, you place the distant, slightly remote front end carefully, and only then, as a corner finishes and straightens, do you prod the throttle onwards – rather than lobbing the front end at a corner and worrying about the rest later.

From that perspective, the C feels more like a big Aston Martin than a 911 – more grand tourer than sports car. Which isn’t a criticism. It’s why, presumably, they called it what they did.

When the GT was first launched, its light but quick steering and lengthy front end was combined with rear suspension that gave no reassurance that it would follow where you’d just advised the front to go. People who understand these terms better than me said it lacked roll stiffness, so felt like the rear would fall into a corner and fail to support its cornering stance. It felt limp, and nervous, at the rear.

Anyway, rolling changes to all GTs earlier this year dropped the roll centre at the back to alleviate the problem, and a quick go in a base GT alongside this new C does show they’ve sorted it. The steering is still light, oddly so for a hydraulic system, but there’s some road feel there if you look for it. The ratio’s still a bit fast, but that’s a way to make a long, relatively heavy car feel agile – so, y’know, fair enough.

Now, though, you can corner with much more confidence. I reckon dampers are best in their softer mode to avoid too much brittleness, and this is always a wide car, but it’s now a planted and confidence-inspiring one too. And the extra tyre width on the C, electronically controlled diff and, crucially, that rear steer make the GT C even more willing to turn, and grip, and entertain. 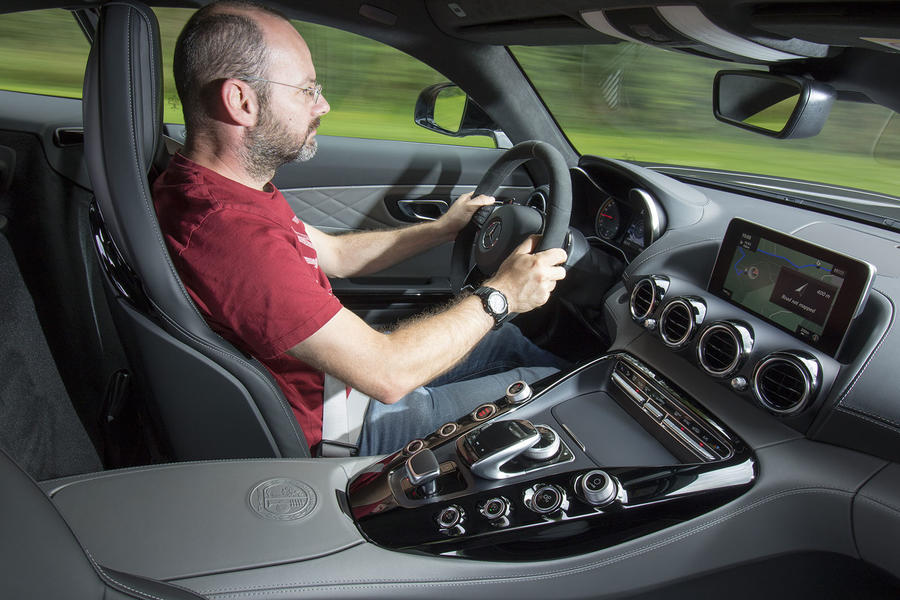 There are plenty of reasons to buy one, although I'd be inclined to wait until the Edition 50 examples have gone (built to mark AMG's 50th anniversary) and get a regular GT C instead. The AMG GT, now, has finally come of age, if you like.

No, it doesn’t do what a 911 does, especially the versions that come out of Weissach, but it isn’t meant to. It has its own character, its own showy but relaxed way of doing things. With a few tweaks along the way, it has matured into a very likeable and extremely capable car. 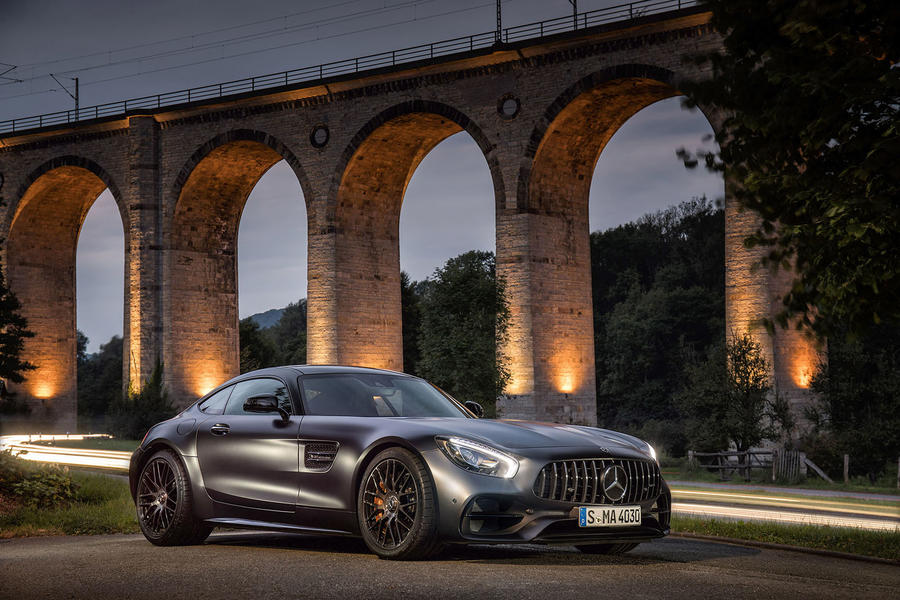 Look at the width of that bleedin' centre console.  It's not a car in which to drive somewhere quiet and romantic and lean in to give your new bird a snog.

'makes the GT feel quite the
muscle car'

This camp construction has been used for far too long, now. Please stop it.

Front of car in another time zone

You'd need binoculars to park judging by the distance between the driver and the front of the car!