The GLS 63 heads an increasingly long line-up of go-fast SUVs from Mercedes-AMG.

The US-produced model builds on standard versions of the third-generation GLS with the latest iteration of the Mercedes performance car division’s twin-turbocharged 4.0-litre petrol engine. The sonorous V8 is mated to a 48V mild-hybrid system that enables electric boosting for an extra dose of performance and greater efficiency.

Driving through AMG’s nine-speed automatic gearbox and a fully variable 4Matic+ four-wheel drive system, the combustion engine kicks out a nominal 603bhp at 5750rpm. A further 22bhp from the electric motor, which also acts as an alternator to harvest kinetic energy, ultimately gives the GLS 63 a combined 625bhp. That's 48bhp more than the now-discontinued 5.5-litre twin-turbo V8 engine found in the old GL 63.

Torque is rated at 626lb ft between 2250rpm and 5000rpm, although it can be boosted to 810lb ft for short periods of full-throttle acceleration thanks to an additional 184lb ft from the electric motor.

Official figures point to a 0-62mph time of 4.2sec and a nominal top speed of 155mph. This can be raised to 174mph with the optional Driver’s Package, which also adds upgraded tyres to the mix.

A range of fuel-saving features, including a coast function that idles the engine on a trailing throttle and brake energy recuperation, aim to provide the 2555kg GLS 63 with creditable fuel consumption and emissions figures, but with claimed combined cycle figures of 23.7mpg and 273g/km on the WLTP test procedure, it’s anything but economical.

Chassis upgrades over the standard GLS are focused on the speed-sensitive electro-mechanical steering, adaptive air suspension and brakes, which use 400mm steel discs in combination with six-piston calipers up front and 370mm rear steel discs with single-piston floating calipers at the rear.

AMG Dynamic Select offers two additional drive modes on top of the familiar Comfort, Sport, Sport+ and Individual. Choose Trail or Sand and ground clearance is raised by 55mm and the engine and chassis settings are adapted for off-road driving. 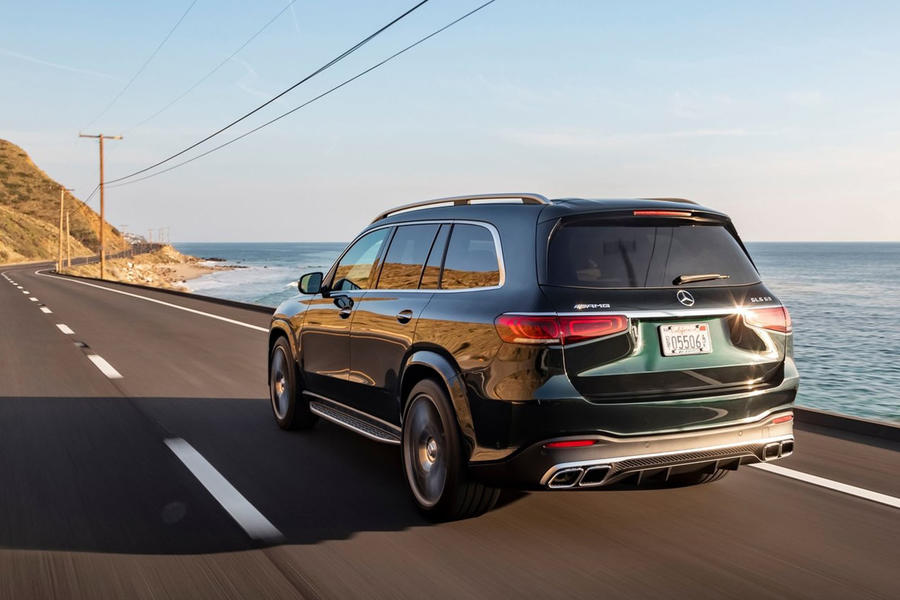 Driving the GLS 63 on public roads is lesson in moderation. Few seven-seat luxury SUVs have the ability to erupt off the mark with such athleticism and then go on to reach such high speeds with all the potency of a pure-bred sports car. And you’re constantly reminded of it by the flashing speed limit sign function.

It’s the deep reserves of torque, boosted as they are by the integrated electric motor, that give the new AMG its bounding performance. It is omnipresent at anything above 1500rpm and propels the big SUV along with the sort of effortlessness matched by only the best of its rivals.

With a short application of the throttle in one of the more performance-orientated driving modes, you’re already well down the road before you know it and the sheer speed is accompanied by a lovely deep baritone rumble from the exhaust.

The efforts of the engine are well backed up by the gearbox, which picks off ratios in much more determined fashion than the unit used by the standard GLS.

It’s not all about seat-pinning acceleration and sheer speed, though. When you wind back the pace and choose the Comfort drive mode, the GLS 63 becomes a capable long-distance cruiser. Even on the optional 23in wheels, there’s still a degree of compliance to the ride that other performance SUVs fail to deliver in their most relaxed driving mode. On part-throttle loads in higher gears, it’s wonderfully refined, too.

AMG has gone to extensive engineering lengths to ensure the dynamic potential of the GLS 63 improves on standard versions of the third-generation GLS. And it shows.

The adaptive dampers stiffen in steps through the Comfort, Sport and Sport+ modes. The air springs also automatically reduce the ride height by up to 20mm in both Sport and Sport+, and when your speed extends beyond 75mph. It drops by 10mm in Comfort mode, too.

In addition, active engine mounts help to control load forces, stiffening through corners to provide a firmer base for the GLS 63’s mighty powerplant and then relaxing again to better disperse road shock through the structure on the straights. Electronically actuated active roll bars firm up to counter roll as lateral forces increase, then loosen to help keep the ride pliable at the straight-ahead.

Given its weight and size, it’s incredibly agile along winding roads. It's perhaps not quite as nimble as some rivals sporting four-wheel steering, but the precision and control is definitely a big step up on the old GLS 63 and sufficiently engaging to be described as entertaining.

The 4Matic four-wheel drive system operates in combination with a standard electronic limited-slip rear differential. The apportioning of drive is predominately to the rear until greater grip is required, at which point up to 50% can be fed to the front wheels. The upshot is outstanding traction and purchase .

Inside, the cabin has received the traditional AMG treatment, with AMG-specific instruments, infotainment functions, steering wheel, front seats and trim elements. It’s high on quality and its twin 12.3in displays, which work in combination with the German car maker’s latest MBUX user interface system, deliver suitable high-definition traits. But the GLS 63 lacks the bespoke feel of some high-end SUV rivals, feeling and looking a bit too similar to that of the smaller GLE 63 in many areas. It’s commodious, though, with the capability of accommodating up to seven people in three rows of seats, with 355 litres of luggage space, or five people in two rows and an 890-litre cargo area. 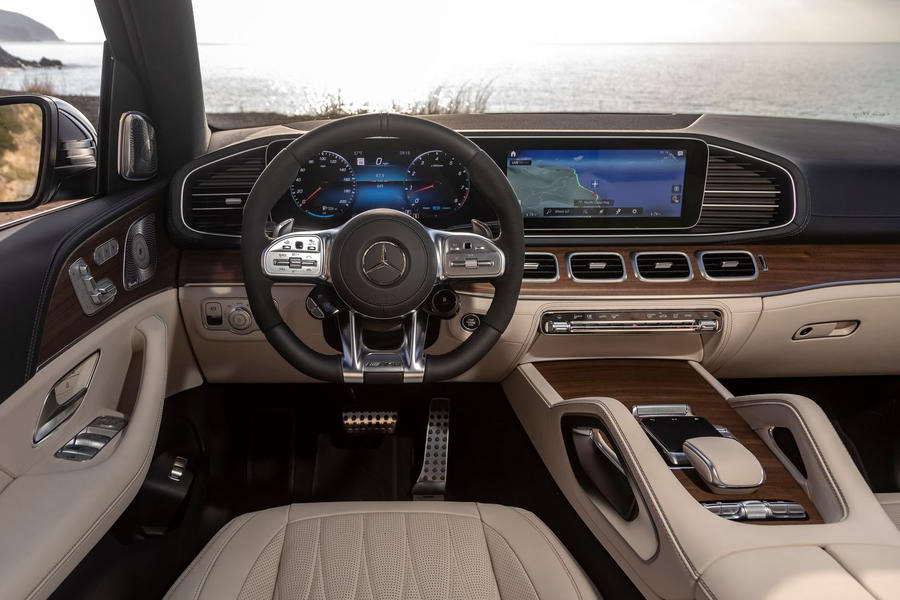 The breadth of the GLS 63’s abilities is striking. And in certain markets, namely North America, it likely has a place. But at 77mm longer and 22mm wider than its already oversized predecessor, it’s just too big to be described as suitable for the UK.

That’s not to say people won’t consider it. But if you’re after performance and it has to be an SUV with a three-pointed star on the grille, the smaller and ultimately more wieldy if not quite as spacious GLE 63 is probably all the car you’ll need. 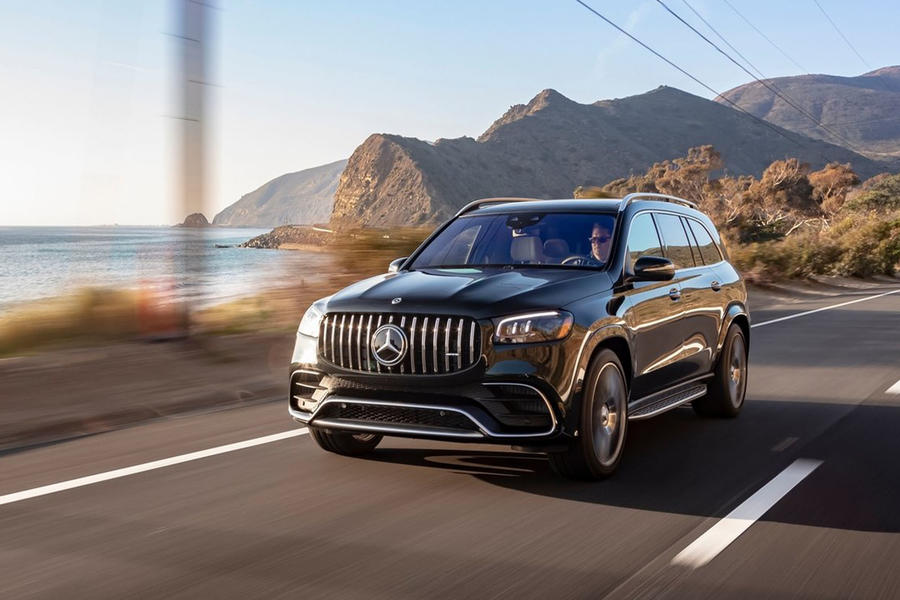 Good family car if you've got the $$$

Looks good to me, grille not obnoxious and buck toothed like the BMW.  Excellent interior - makes Teslas look like the junk they are.  In summary - I'd have one!

That is one ugly munter of a

20 March 2020
That is one ugly munter of a fat, ludicrously overweight bus.

I actually quite liked the

I actually quite liked the previous incarnations.  But this? My goodness - what a pig.

Talking of pigs, I saw a new BMW 1 Series today.  The front is pure pig snout.

Cars for owners with a medical condition

20 March 2020
Surely we've reached "peak size" surely?!
BMW recently launched the X7 which is also massive.
The only plausible explanation is that our friends across the pond still love their full fat coke and burgers! Oops, no offence.

The front grille could do wiith being larger

If the grille could be enlarged to the ground and windscreen you would not be able to see the reat of the car so that would be is a great enhancement,resulting in like a garden fence panel.

to see the rest of the car

Built in America, and no

Built in America, and no doubt most will be sold there, where its fuel consumption and size are not looked at the same way as it would be over here. Dont like the grill, and have no need for a 7 seater, let alone one that goes quite this fast, but i am quite impressed they think they can sell enough of these to justify its existance. Even more surprised we are going to be offered the option of having one at all. Its not very 'Greta'.........

a big enough grille.  Come on AMG, I mean BMW's grilles have already started going up the bonnet!  What are you *thinking*?

Sounds like a fantastic vehicle. Spoilt by a massive obnoxious in your face grille. Shame.