Not even that long ago, merely the idea of the Range Rover Velar P400e would have had Land Rover lovers scratching their heads. Possibly through to the bone.

This thing certainly feels a long way from the Series 1, or indeed anything the company offered before 2011, when the Range Rover Evoque was introduced and quickly redefined what the brand could represent in the modern era.

Yet these days, giving buyers the option of a plug-in hybrid powertrain is commonplace. To be expected, even. And having a lower-riding, luxury-centric and altogether more car-like model in which to house it is pretty ideal for Land Rover.

Ideal because were you to devise a full-size Land Rover, from scratch, to appeal to prevailing tastes in 2021, it would probably look an awful lot like the Velar P400e.

This new plug-in hybrid derivative has been introduced alongside a broader refresh for the Velar, despite the fact the model is only three years old. Updates are therefore light, with the exterior gaining only new paint colours and wheel designs, which will do little to change the divisiness of the Velar. It will remain concept-car slick to many and a bit of smoothed-off clown's shoe on wheels to others.

The interior receives more change, and while it continues to major on woven fabrics as well as leather (if you would like), you will now find a new steering wheel and gear selector, along with the updated touchscreens. The screens themselves are unchanged in terms of hardware, but they now use JLR's genuinely excellent new Pivi Pro infotainment software.

The flagship is the 396bhp P400 straight-six petrol, which will hit 62mph in 5.5sec. However, with 479lb ft, its D300 diesel counterpart is the most torque-rich model and, being rated at 38.2mpg combined, also considerably more frugal.

Lower down the range, the four-cylinder D200 turbodiesel replaces the old D180 and D240 units. Its P250 petrol equivalent is on hand for those willing to trade some fuel economy for a bit more power but whose pockets aren't quite deep enough for the plug-in or either of the six-cylinder models. 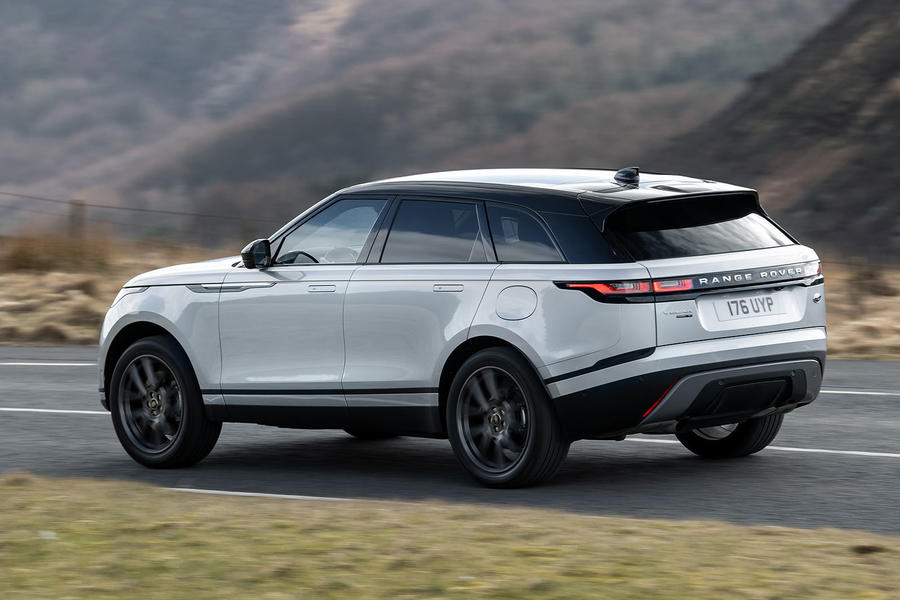 We've already experienced what the P400e powertrain has to offer, because it is deployed in exactly the same specification in the updated Jaguar F-Pace, which with the Velar shares its D7a platform.

The system integrates a 141bhp electric motor into the Velar's eight-speed transmission. That motor is fed by a 17.1kWh battery pack beneath the boot floor and alone can take the Velar to 87mph. However, because the driveline only ever operates with full four-wheel drive, even solely under electric power, there's always an extra layer of mechanical drag, so EV range is rated at only 33 miles.

Note also that, on account of the battery pack, the P400e doesn't come with a spare tyre, as do its rangemates. This caveat isn't unusual for plug-in hybrids, but for the many out there who consider a physical spare essential, it's worth knowing about.

As for charging up, given the meagre electric range on offer, it's debatable how often owners will utilise the car's 32kW DC capability, but a full charge at home takes around three hours from a 7kW wallbox so is easily completed overnight. Plugging the car in also gives you the option of pre-conditioning the cabin via smartphone.

The driving experience is then a mixture of spell-binding serenity and, well, something that's a little underwhelming, given the £61,000 asking price.

The Velar P400e has three driving modes (EV, Hybrid and Save), all quickly selectable via the lower touchscreen – and in the default Hybrid mode, it will happily switch the 296bhp 2.0-litre engine on and off and lean on the electric motor to a greater or lesser extent in order to maintain the progress your right foot is requesting.

If you want to game things, there's a useful indicator on the tacho that shows you where, in terms of your throttle application, the system will switch between pure-electric and dual-power running, but really it's best to ignore this and leave the car to balance things itself.

Playing into the general sense of intuitive ease in Hybrid mode are the brakes, which have a regenerative function but are natural in pedal-feel. It all means that when you're just trundling along, this quietly effective PHEV powertrain doesn't do much wrong – especially when you factor in Range Rover's precise steering rack.

EV mode is equally straightforward: you hit the button and the car locks the powertrain into electric mode. It's now, particularly on smooth roads, that the Velar feels quite other-worldy.

It is, after all, a Range Rover, albeit one without the imperious driving position and charming sense of utility found in, say, the Land Rover Discovery or the full-size Range Rover. You feel it probably shouldn't be this subtle, but in EV mode it is – and in built-up areas, the Velar P400e positively creeps around, like a very careful, very sensitive bull in a china shop.

What you won't like so much is the ride-quality on anything less than a glass-smooth surface. The battery pack and associated electronics add some 200kg to the mass of the P400e and perhaps the way that's accounted for, in the form of higher spring and damper rates, creates a problem. On lumpier roads in partiuclar, the suspension is more reactive than you would experience in even a mid-ranking saloon, and neither does the P400e capture the same fluid flow that modern Land Rover is known for.

In fairness, the Velar, particularly on the enormous wheels that really bring out the concept-car in the design, has never ridden quite as slickly or nonchalantly you might hope, despite its fine handling, and the plug-in hybrid powertrain does nothing to help in this respect.

The other disappointing element of the P400e is the performance, which never feels fully representative of 398bhp and 472lb ft. It will accrue speed quickly, the P400e, but if you ask for strong acceleration, the electric motor gives you only an underwhelming stab that fizzles out well before the gearbox and engine are ready to deliver. At anything more than a canter, it's not the most convincing powertrain, and when the four-cylinder engine is operating alone, it's outgunned by the car's 2158kg kerb weight. 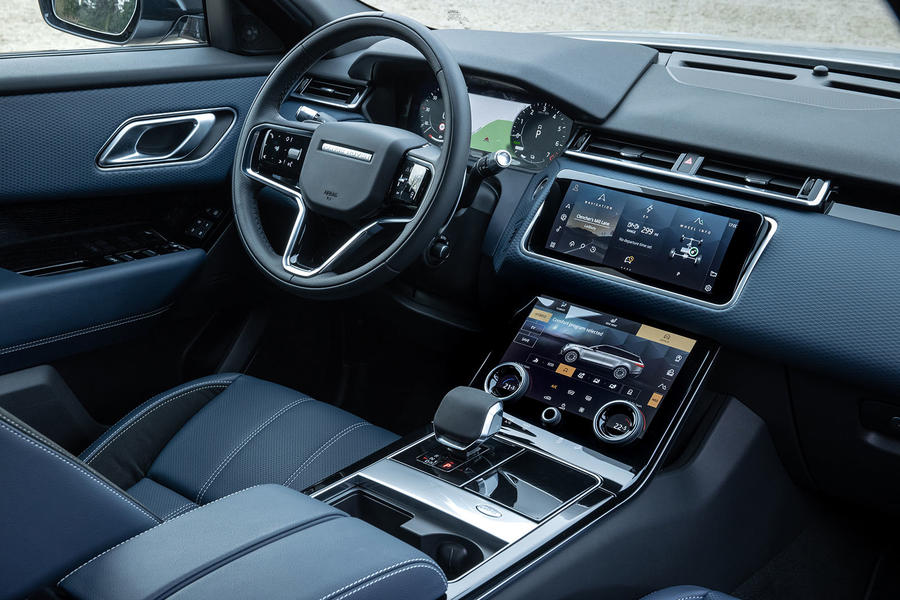 If you live in the city and you like the idea of pure-electric driving, and you can charge up at home, and of course you actaully want a Velar in the first place, then yes, you should probably buy the P400e.

Sounds familiar, doesn't it? As is often the way, the plug-in hybrid model in the line-up isn't hugely compelling in it's own right, but excels within a specific set of circumstances.

In this case, the fact you can't have air suspension on the P400e makes the £10,000 cheaper D200 the pick of the four-cylinder models. The D200 would also better suit high-mileage drivers, as would the D300, with its effortless torque and reasonable fuel economy at an unstressed top-gear cruise.

But if you do mainly intend to drive your Velar in town (and, let's face it, that's probably most of them) and want to do so relatively free of guilt, the P400e is undoubtedly the one you want. Along the with low tax band, that ought to make it a strong-seller in the line-up.

Perhaps the bigger question is whether the Velar should be your plug-in hybrid SUV of choice in the first place. The BMW X5 xDrive45e springs to mind: it's heavier than the P400e, costs a little more and has its own share of ride-quality issues, but it also possesses a juicy straight-six turbo petrol engine, pairs it with a bigger battery for more than 50 miles of electric range and has an interior every bit as lavish as that of the Range Rover. 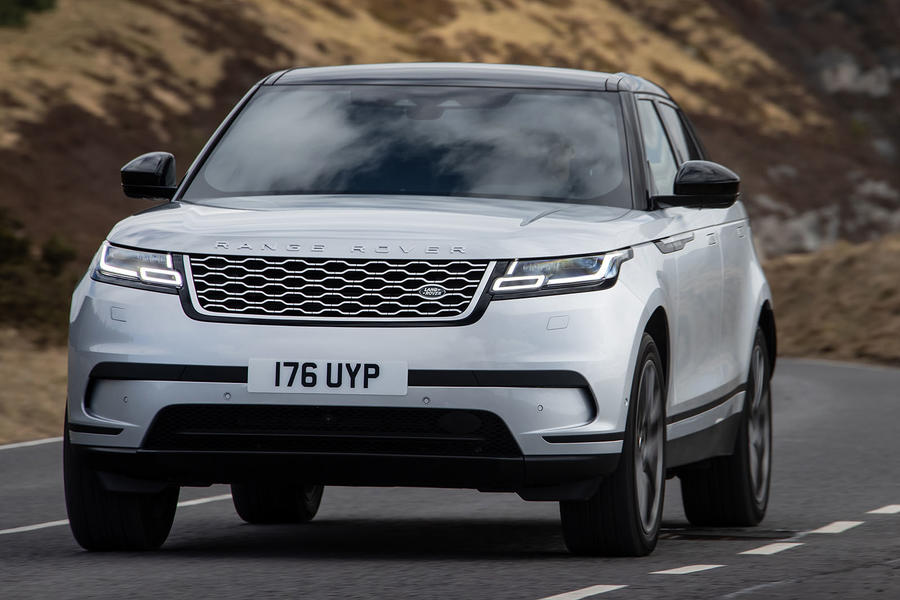 JLR make a much better vehicle in the form of the Jaguar iPace, which also has a tiny BIK tax band by comparison, so would be way cheaper for fleet drivers.  That's if it has to be an SUV.  Otherwise, all the smart money in this bracket is going on the Tesla Model 3, which is probably why Tesla have reportedly sold out of their entire 2021 Q2 production already.

£62k for a car that will break down and half the electric stuff will never work properly. The idea of retractable electric door handles is just genius. You'll look pretty funny when they fall over.