If the e-Niro is to be thought of as Kia's 'normal' electric vehicle, you get the sense the Korean firm might want you to think of the new Soul EV as its cool older cousin. You know, the one who vapes and listens to bands you’ve never heard of.

Its looks are key to that. The third-generation Soul retains the unabashedly boxy profile and boosted ride height of its predecessors. To this tester’s eyes, it’s not quite as energetically styled as it once was; perhaps that’s got something to do with the sort of sleepy look the new headlight design lends the front end. Nevertheless, it's quite appealing; there’s still a healthy amount of quirk appeal about the design, which is an increasingly rare phenomenon.

In Europe, Kia will be selling the Soul only as a battery electric vehicle (BEV), while petrol models will still make their way to the US. Here in the UK, the decked-out First Edition model, which costs £33,795 post-Government grant, is for now the sole offering (sorry).

Despite the initial lack of choice, however, Kia UK seems pretty confident in the Soul EV's potential. It already has some 2000 units on order, along with 8000 e-Niros. Given that just under 38,000 BEVs were sold here throughout the entirety of last year, it looks like Kia is gearing up to claim a fairly sizable chunk of the market for itself between now and December. 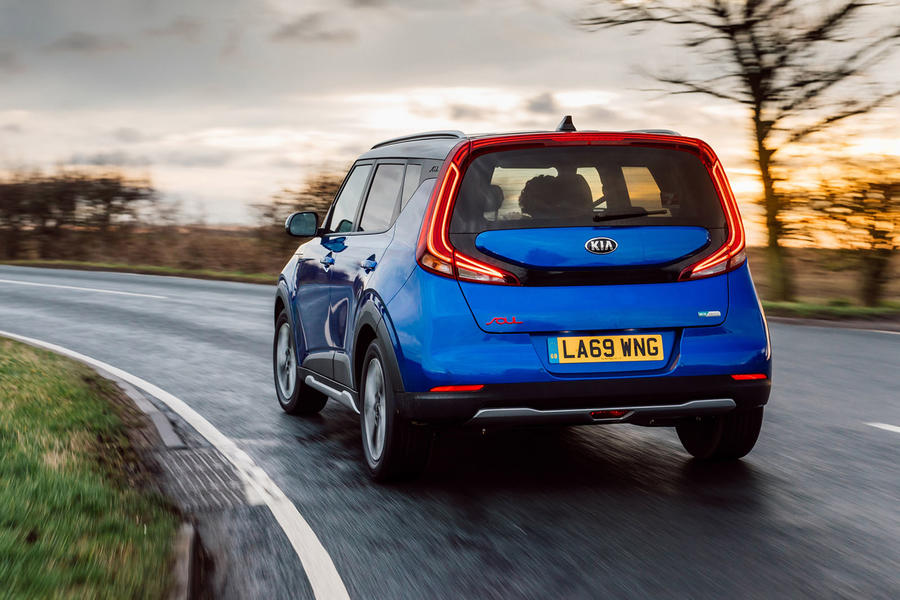 Along with its reasonable price and strong level of standard equipment, the Soul EV’s 280-mile WLTP range is a key part of its appeal. This is enabled by its 64kWh battery pack (the same as you'll find in the e-Niro and Hyundai Kona Electric), which drives a 201bhp permanent magnet synchronous motor mounted at the front axle.

Plugged into a 100kW charger, that battery is able to reach 80% capacity in just under an hour, while a regular 7.2kW home wallbox is capable of completely replenishing its power reserve in 9.5 hours.

Performance is strong without being wild; 291lb ft of toruqe endows the boxy Kia with spritely acceleration between 30 and 50mph. Past that point, the urgency with which it accumulates pace begins to tail off, but there’s more than enough shove to get you up to motorway speeds on slip roads plenty quick enough.

Compared with petrol-engined crossovers, the Soul's throttle response is usefully sharpened too. But as we observed when we road tested the e-Niro last year, Kia seems to have engineered in a very slight delay when you accelerate away from a standstill - likely to help prevent fresh EV converts from inadvertently spinning the front wheels at step-off.

There are four different settings for the regenerative braking (one of which pares the effect back completely so you can freewheel), with paddles on the steering wheel enabling you to jump from one to another.

In their most aggressive setting, a lift of the throttle will drop the Soul’s pace quite suddenly, but not quite to the extent that you’d feel confident to drive using only the throttle pedal, as you might in the Nissan Leaf. The physical brakes seem to be calibrated reasonably smartly, too, with no obvious lack of feel or intuition getting in the way of smooth deceleration.

To say the Soul handles with abundant vim and vigour would be a bit of a stretch, but it isn’t completely devoid of character. Its steering is accurate and seemingly unafflicted by the contrived, cloying sense of false weight so often found in Kias - at least not to the same extent, anyway. Regardless, it changes direction keenly and tidily enough, its inherent dynamism feeling in step with its easygoing nature.

It rides pretty smartly, too. There’s slightly less weight here than in the e-Niro, which has perhaps allowed Kia’s engineers to soften the spring rates a bit to give the Soul a touch more compliance over lumpy roads. It smooths out compressions smartly and does a good job of distancing you from the impacts caused by terribly maintained B-roads. 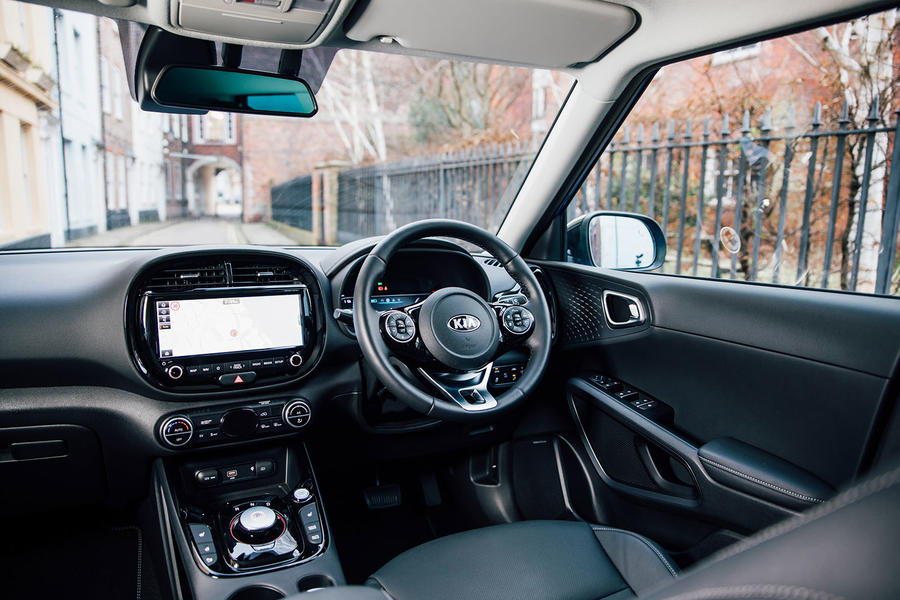 Admittedly, there's a bit of a penalty in opting for the Soul EV over the e-Niro - and it has very little to do with price.

While the interior is impressively spacious, well-equipped and well-built, the boot is considerably smaller than that of its relative. In fact, with just 315 litres of space on offer, versus 451 in the e-Niro, the Soul has a smaller luggage compartment than the Volkswagen Polo. For somebody struggling to decide between the two electric Kias, this may well be a deciding factor.

If you can overlook this, though, the Soul remains a likeable, appealingly leftfield choice in an increasingly populous EV market. Even though it may not look quite as chic as it once did, it’s certainly a more appealing thing to behold than the e-Niro, Leaf or even Kona Electric. That it’s also impressively refined, suitably quick and very easy to drive also bodes well.

But it’s the claimed 280-mile range that remains the Kia’s hidden ace card. Until the likes of the Volkswagen ID 3 arrive in the UK, there aren’t many places you can get more range for the money. 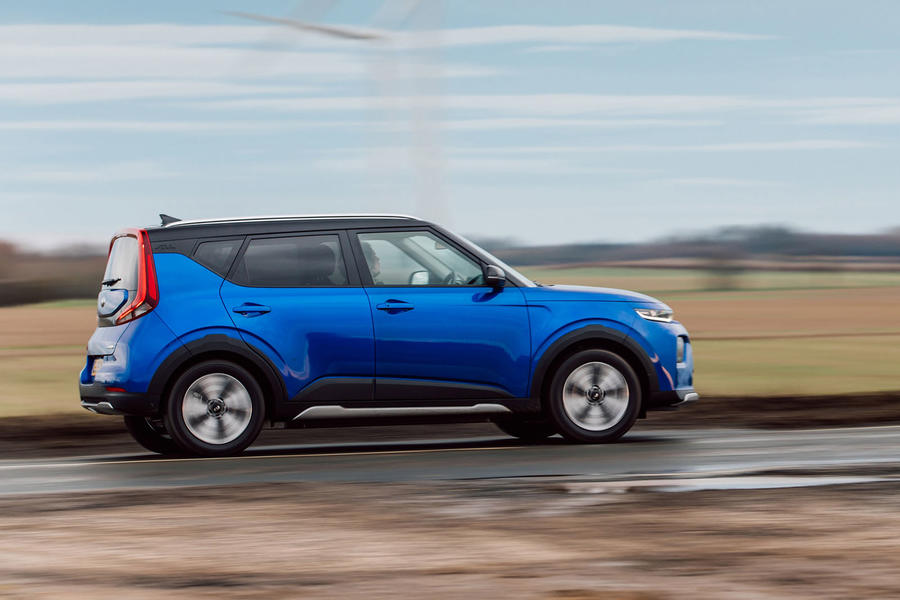 Always quite liked the soul,

27 February 2020
Always quite liked the soul, the original specials like soul burner etc were quite funky, this has lost a bit of that funky styling and I am unsure of the rear light arrangement as I think it looks odd but it does appear good value for its range and performance. That it's also reviewed as being well built with good ride and handling all should make this pretty sought after.

This should rival the electric Mini quite well. Looks great. Big achievable range and presumably with a giant warranty. I think this would work for us.

This should rival the electric Mini quite well. Looks great. Big achievable range and presumably with a giant warranty. I think this would work for us.

Its a bit of a different market though. Something the size of the MINI would be ideal for me, but even though it has all the advantages of a purpose designed model,this Soul is just too big.

Every single design cue inside or out

Looks like a copy cat of a mini a ford a volvo.

Looks like a copy cat of a mini a ford a volvo.

Probably best to say which bits, cos I cant see anything that looks like any of those manufacturer's designs.

Did I dream that the styling was Starwars inspired? You can kind of see it. Not sure I'd feel entirely comfortable driving around in a helmet though.

Did I dream that the styling was Starwars inspired? You can kind of see it. Not sure I'd feel entirely comfortable driving around in a helmet though.

Luke, Luke I am your charger!

I think the boot is like the previous generation Soul in that it has a false floor which lowers by about 6 inches, not shown in the article.