8
Share review
Boutique manufacturer Jannarelly brings its Design-1 to the UK with great looks and a promising specification. But can it deliver on that promise where it matters: on the road?
Share
Open gallery
Close

According to its creator, Dubai-based Anthony Jannarelly, the Design-1 is a back-to-basics throwback to a time when sports cars were simpler, lighter, more engaging and, therefore, better.

Five years in the planning (during which time he has also styled the likes of the Fenyr Supersport and Lykan Hypersport for W-Motors), the £85,000 Design-1 comes to the UK with probably the new Morgan Plus 6 as its closest rival, both in concept and price.

And if you’re wondering whether Jannarelly is yet another of these 'here today, completely forgotten tomorrow' companies we see so often, with ambition far outstripping the ability to deliver, Jannarelly has already built 20 cars, has orders for 70 more and is putting the finishing touches to a super-GT, to be known, predictably enough, as the Design-2.

But back to the Design-1. It has a simple steel spaceframe chassis, a normally aspirated engine behind the driver, powering the rear wheels through an optional limited-slip differential and a six-speed manual gearbox. An automatic ’box be specified, but why you’d want to eludes me. Suspension is by double unequal-length wishbones at each corner, braking by large iron discs. There is no anti-lock braking and no airbags, although traction control is an option.

The list price buys you the car with a glassfibre body in convertible form, although it can be turned into a coupé in a matter of minutes by fitting a hard-top with its integral Perspex sidescreens. The top is made from carbonfibre and costs £7600, and if you’d like the rest of the car in carbonfibre (and save 40kg off the already fairly svelte 850kg kerb weight), it will cost an additional £12,700, taking the entire cost of the car into six-figure territory. Those who want to go the other way can detach the windscreen and turn it into a full fly-spitting roadster by fitting a full-width aero screen (£2000).

The engine is a Nissan 3.5-litre V6 developing 325bhp and sourced from a large Maxima saloon sold in the US, China and Japan, although it is related to the engine in the long-defunct 350Z sports car. As for creature comforts, the Design-1 is far better equipped than an Ariel Atom or even a Caterham. There is decent luggage space both in the nose and behind the engine, while it has air conditioning, a decent heater, speakers and a USB port into which you can plug your smartphone. 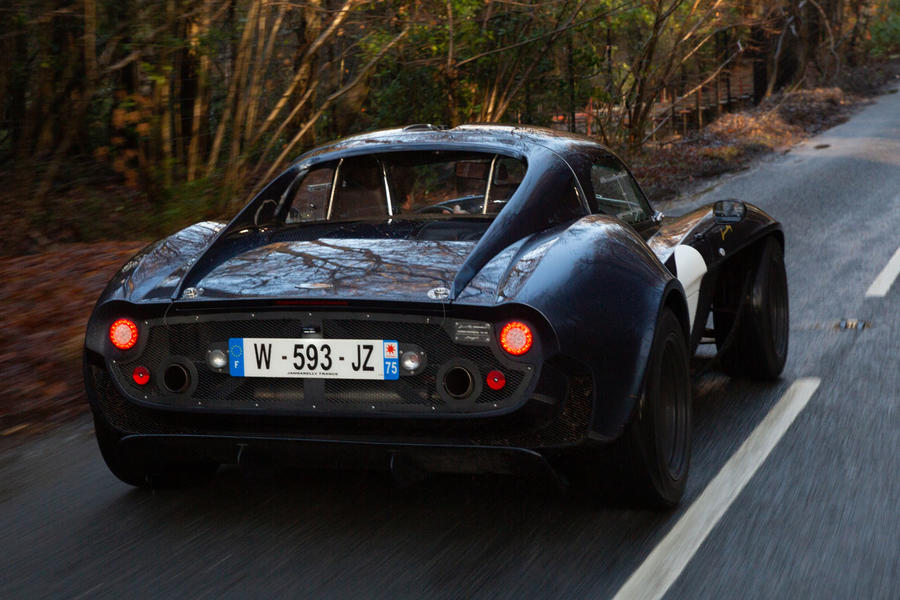 It’s a little awkward to climb aboard with the hard-top fitted, although it does flip forward and is a relative doddle compared to the process of getting into, say, a Caterham Seven with the roof up.

You step in, brace yourself on the rollover hoop and lower yourself down the narrow channel that leads to the pedals. These were too close for me, but the pedal box is fully adjustable. The really tall can ask for the brake master cylinder to be repositioned and a special seat to be made, so almost everyone will be able to get comfortable. It's all very simple in here, as it should be, but I’d have much preferred larger, clearer instruments or even a digital screen, even if it messes with the car’s retro vibe.

The engine fires with a crisp bark and the stick shift engages each ratio with delightful precision. Even as you move away, the car feels taut, mechanical and involving. But you’ll only really understand what it’s about when you can find somewhere to let the motor do its stuff. And when it does, you’ll scarcely believe it was designed for a large Nissan saloon, because the Jannarelly then sounds like one of those million-pound 1960s racing cars you see at the Goodwood Revival. While quiet enough on part-throttle, it is spectacularly loud with the taps wide open and gorgeous to listen to, making you want to drive very fast indeed.

The Design-1 appears to have the chassis for it, too. I qualify the statement only because I wasn't in the car for long, partly flooded Berkshire roads were in no state for testing a car like this to anything like the limit and I had Monsieur Jannarelly next to me, and he'd already confessed to not being the world’s greatest passenger.

Even so, I can tell you the unassisted steering has terrific feel (but a terrible lock) and with the mid-engined configuration and appropriately soft spring settings, traction is excellent even in terrible weather. I found myself longing for more time in the car and on better roads – always a good sign. 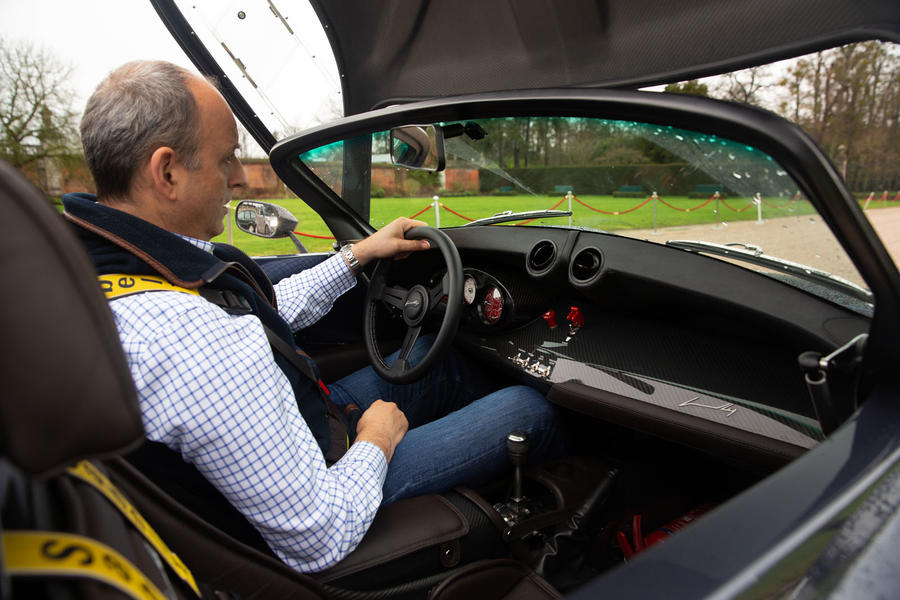 No question it’s a lot of money for a car very few will even have heard of – 10 grand more than a Porsche Boxster Spyder or Cayman GT4 before options. But it's great looking, drives really well, sounds utterly ridiculous and puts you so in touch with the simple, delightful business of driving that even the aforementioned Porsches would most likely seem quite remote by comparison. A decent Caterham would be more fun still, but far less usable.

Anthony Jannarelly plans on building 499 Design-1s, during the course of which he’ll relocate his business to a country better known for making cars. He has already appointed a new CEO, who must remain nameless for now but who comes from a massively respected automotive brand and would presumably not give that up on a whim.

All of which makes me believe that far from being a flash in the pan, we’re going to be hearing a whole lot more from Jannarelly in the future and, having seen renderings of the Design-2 (which I am sadly not allowed to share), I’d say that future has the potential to be very bright indeed. 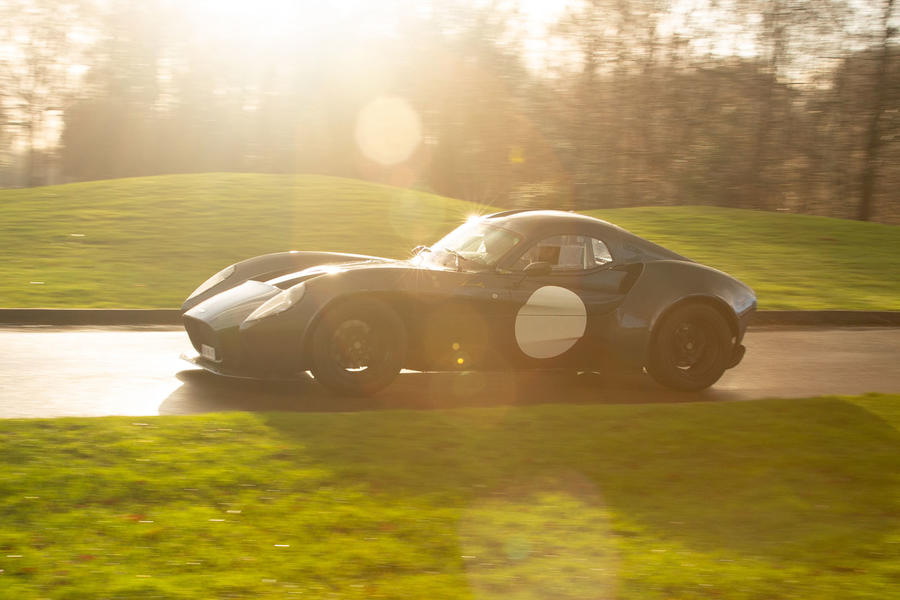 it's whole bunch of old schooler 1960s all rolled in to one, with a hint of batmobile. There might be some exposed screws, but sometimes that's a good thing. What if that rear panel actually needs to be removed for something? screws/bolts are better than plastic clips. I used to have a Mazda 323 with exposed screws in the interior, it never bothered anyone, and they went back in properly after being removed. That being said, I'd rather have a morgan

Frankel is a writer I respect. He's right to respect that Jannarelly has built 20 cars - a prototype and preproduction and pilot built's worth. Which is way better than TVR's new already dated-looking and eternally/permanently delayed new Griffith. But as so many say here the 22 screws/pop-rivets on the rear panel and lights kill it. Not even TVR had that many DIY fasteners on show, that'll kill it sadly as today's buyer rightly expects more at that price.

I now know that Andrew Frankel and I have diametrically opposed views as to what constitute "great looks". This thing looks like a particularly amateurish kit-car to my eyes.