From £90,8608
Jaguar’s range-topping 911 rival has drama and driver appeal aplenty, and wears its new look well – even if the F-Type might be more fun if it took itself a bit less seriously.
Open gallery
Close

The very latest, refreshed Jaguar F-Type two-seater, which has been updated for its, wait for it… eighth year in production (cue slightly flat, muffled fanfare).

Sports cars tend to have unusually long lives whoever they’re built by; but then this one was, in some ways, old beyond its years even when it was brand new, having been built on an aluminium model platform adapted from that of the 2006 XK.

There’s another reason, too, that some might think of the F-Type as old-fashioned. Over in the world of North American sports cars, after nearly 70 years of production, Chevrolet has just relocated the engine of its iconic, big-selling Chevrolet Corvette from the front to the back of the chassis. Well, Jaguar’s one of the few companies with a longer history in the sports car business than they have in Flint, Michigan; and no such switch has been made in Castle Bromwich.

Specialist historians will tell you that if it hadn’t been for American G.I.s driving British sports cars built by Jaguar’s forerunner SS Cars (among others) during the Second World War, it’s unlikely that the original Corvette would have even been dreamt of – but be that as it may. At Jaguar they’re still making their sports cars just as they did in the 1930s; engines up front, cabins behind. And, for the record, the F-Type still proves that there are convincing reasons for doing so.

And about those engines: there are now three of them – and two are still V8s. How wonderful. As part of the F-Type’s technical overhaul for the 2021-model-year, its supercharged V6 engines have been removed from the model range altogether (at least as far as UK and European sales are concerned). The choice remaining is between an entry-level four-cylinder, 296bhp turbocharged option and two supercharged 5.0-litre V8s, the more powerful 567bhp version of which was fitted to the top-of-the-range P575 R AWD we tested. 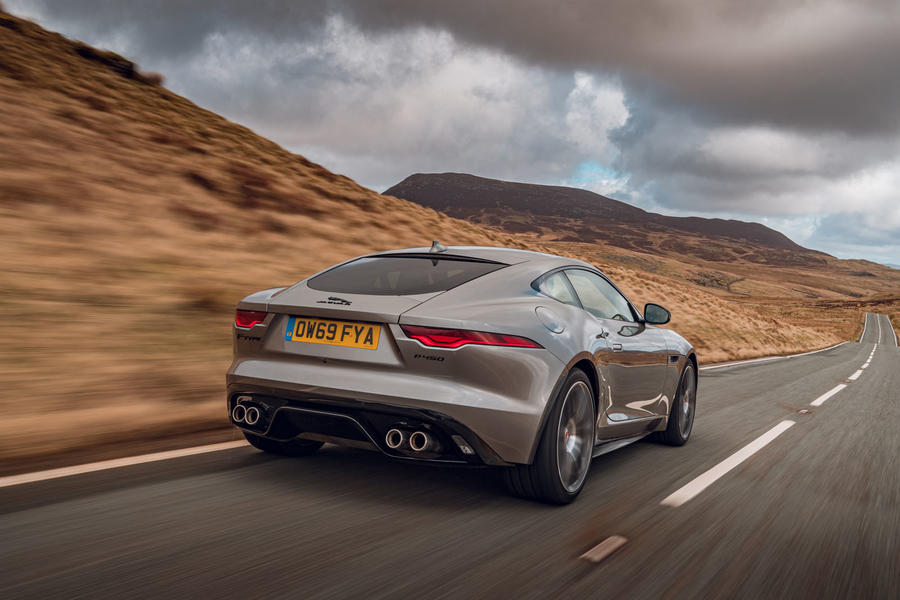 The car’s styling overhaul is where much of the facelift budget has been spent, you’d imagine – and you’ll have your own take on its effectiveness. It split opinion at Autocar, with a small majority preferring the car’s new sleeker, suspiciously fashionable ‘liquid metal’ looks and Jaguar Jaguar I-Pace-style grille – but notable dissenters making their criticism known also. If the redesign’s job was to draw your attention to the car afresh, though, you’d call it a pretty clear success; if anything, perhaps too great a success.

That’s because the car’s cabin’s mostly as it was, and the driving experience hasn’t changed much either. We’ll get to the latter in due course. As for the former, there are some new trims materials dotted about (I liked the matt black interior doorpulls of our test car, but others didn’t); there’s a new digital instrument cluster; and, among a handful of other changes, there’s a new 10in central infotainment system that adds smartphone mirroring and over-the-air software update capability.

The F-Type remains a strict two-seater and a pretty compact-feeling one at that, although its credentials as a long-striding GT car or a daily-driver would be strong. Occupant space is a little bit limited; not so much that a 6ft 3in driver couldn’t get perfectly comfortable, although if I’d been in need of another couple of inches of either legroom or headroom, I might not have been so comfy. Our test car had bucket-style seats with fixed ‘integrated’-style head restraints, but they were pretty thickly padded, had adjustable cushions and were comfortable over long distance. Boot space is good in the case of the coupe, although access to it is via a slimmish hatchback aperture.

Following neighbour Aston Martin’s lead, Jaguar has added a ‘quiet start’ mode to the F-Type R; sort of. Switch the car into ‘dynamic’ driving mode, or activate the exhaust’s noisy mode, before hitting the starter button and you’ll get an engine startup routine with all the audible blood and thunder that we’ve come to expect from JLR’s Bridgend-built 5.0-litre supercharged V8. Leave both well alone and you get a more reserved throat-clearance act which might allow you to escape the wrath of your family and neighbours when leaving home early in the morning.

Funny, that; something tells me most F-Type R owners aren’t too bothered if they wake the neighbours now and again. Even though it looks a little bit more of a sophisticate than it used to, this remains a sports car with a brash, extrovert personality; the closest thing to a modern-day TVR, probably. You’ll either love its slightly thuggish, loud and forceful charms, or you’ll be embarrassed by them and go and buy something more delicate and understated instead.

The car feels bigger and more substantial to drive than it looks from without, with so much bonnet out in front of you and a reasonable girth to manage. You can sense its bulk (at 1743kg unladen, there’s plenty of that) in the way it handles and rides, although undoubtedly less in the way it accelerates.

There’s a gently bristling firmness to its ride, which becomes slightly tetchy and recalcitrant with the adaptive dampers firmed up. There’s plenty of weight in the well-paced but quite isolating, slightly compliant-feeling steering, too; as well as just a hint of softness to the car’s handling response, and a permissiveness about its body control when cornering in ‘normal’ driving mode. Select ‘dynamic’ mode instead and the car corners flatter but leans hard on its outside wheels in the process, loading up the steering a bit and dealing skittishly with mid-corner bumps.

This is certainly a car with more performance brawn than the chassis can always make particularly easy to use; a bit of a bull terrier on a short lead, if you like. It’s fast and exciting, and gets into a fluent and and absorbing stride on faster, smoother country roads - and plenty will love all that about it. Instead of tracking effortlessly straight and soaking up whatever topography is throw at it on bumpier stretches, though, the car certainly needs to be driven: to be constantly but minutely corrected as it brusquely checks its diverted mass. Four-wheel drive or not, it’s lively under lots of power; the rear-axle will begin to nudge attitude into the car even with the electronics left on, although that liveliness is reigned in one way or another before it becomes problematic.

The F-Type R remains just a little bit wild and unruly, then, even in advancing years. Jaguar’s 3.7sec 0-62mph claim is one you feel you could easily reproduce, with the wonderful snarl of that V8, emerging over the most distant backdrop of supercharger whine, being a constant temptation, and the car being especially quick in-gear between 3500- and 5000rpm.

Between a gearbox that isn’t quite as quick to kick down as a twin-clutcher might be, and an engine that doesn’t produce low-range torque quite like a modern turbo V8 might, you do occasionally get the sense that the car’s powertrain’s just a little bit unresponsive. It’s not really a failing, though; just enough that quicker cross-country driving’s a lot more satisfying in manual mode, with the tacho needle kept right right where you want it; in which mode, the car’s also more immersive to drive in any case. 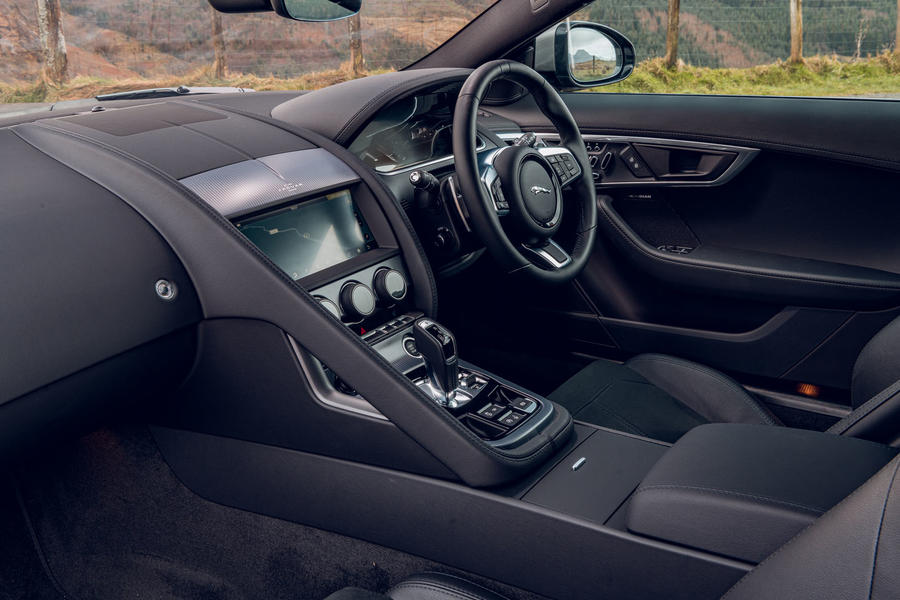 Plenty of sports car buyers instinctively gravitate towards the top-of-the-line option, and this F-Type won’t disappoint them for overall usability or excitement. The car mixes the richness, refinement, high-speed stability and comfort of a fast GT with the driver reward of something smaller and more purposeful quite skilfully – and it’s that blend that a front-mounted engine allows it to deliver better than most differently configured rivals.

It’ll be interesting to find out whether this full-house F-Type is the pick of the facelifted range for those who don’t necessarily need the biggest and braggiest option, though, or whether that’s the new mid-range, rear-drive V8 model. The ‘R’’s handling accuracy and drivability might have been improved a little, but it remains a bit of a brute.

Meanwhile, the noises we’ve heard from Jaguar insiders suggest that less may be slightly more; and on those occasion and roads where this car just begins to feel like it’s got too much firepower for its own good, and might be more enjoyable if it wasn’t trying to be so damned fast, you can believe those noise might well be worth listening to. 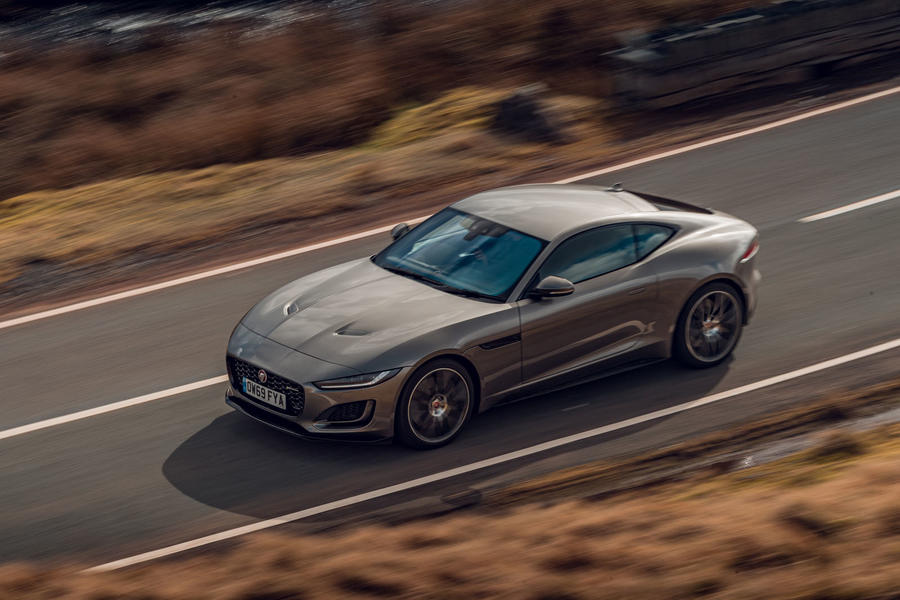 Agreed, and unlike certain so called sports coupes, this doesnt need fake noise from its speakers to make it sound good.

I think this sort of car is

I think this sort of car is all the better for not being 5 star rated.

Perfection can be terribly dull.

I wonder how the tone of this review might change if prancing horses were substituted for those leaping cat badges?