From £37,0457
There are plenty of Kugas to choose from, but is the conventional hybrid the one to get?
Open gallery
Close

If you must have a Ford Kuga in your life, Ford certainly has an engine option to suit.

There's one petrol, three diesels (one of which is a mild hybrid) and two proper hybrids - one conventional, one Ford Kuga plug-in hybrid. Factor in the four-wheel-drive versions available with some and picking the right Kuga rapidly turns into a brain-teaser.

Ford justifies offering all this because the Kuga is now its ‘heartland’ car. As a sign of the way things are heading, the Kuga and Ford Puma SUVs were both in the top 10 of UK car sales in April. The Ford Focus? It slipped out of that top bracket.

We’re testing the 2.5-litre Duratec FHEV (Full Hybrid Electric Vehicle) here, with 187bhp and a 0-62mph time of 9.1sec (a torque figure isn’t available yet, as the homologation isn’t complete). It’s attached to a CVT, while a 1.1kWh battery and AC synchronous motor provide the electrical assistance.

Official fuel economy and CO2 emissions are 49.6mpg and 131g/km respectively, which is on the money for rivals such as the Hyundai Tucson. As it’s a 'self-charging' hybrid, you don’t get the benefit of as much electric-only range, so the CO2 figures take a battering compared with plug-in rivals.

Ford talks up the weight savings on the Mk3 Kuga, with plenty of aluminium in places such as the suspension control arms, plus lighter carpets and hollow shock-absorbers. The company claims an admirable 80kg saving overall, but it’s still a big lump of a car so tips the scales at 1701kg. 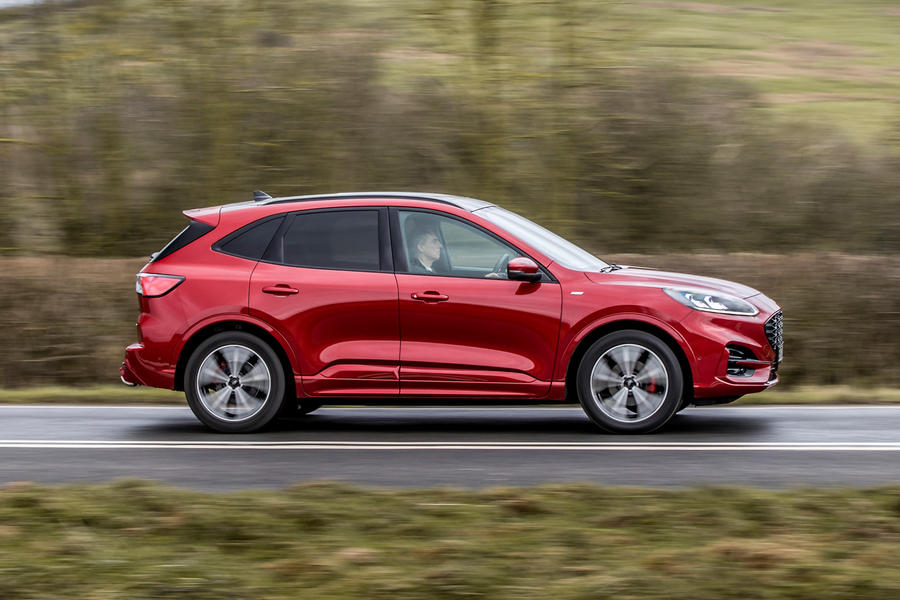 As ever with a conventional hybrid, the Kuga starts silently on electric only, but it’s not long before the 2.5-litre petrol engine kicks in - anything above car park-pace starts it. To be fair, though, it’s a smooth transition and the powertrain is largely refined, with enough punch to make any sort of journey effortless.

The caveat above is down to the CVT: it's fine for pottering about, but as soon as you ask for more, it winds itself up, the engine note climbs to the top of the rev range and there it stays, wailing away. It settles down again once you ease off, but it lacks sophistication – and the Kuga PHEV with the same gearbox somehow manages to contain the whining better.

It’s a shame, because the car is dynamically sound. The ride is on the firm side of comfort but, because it’s a Ford, the excellent damping controls the suspension over all bar the sharpest bumps. 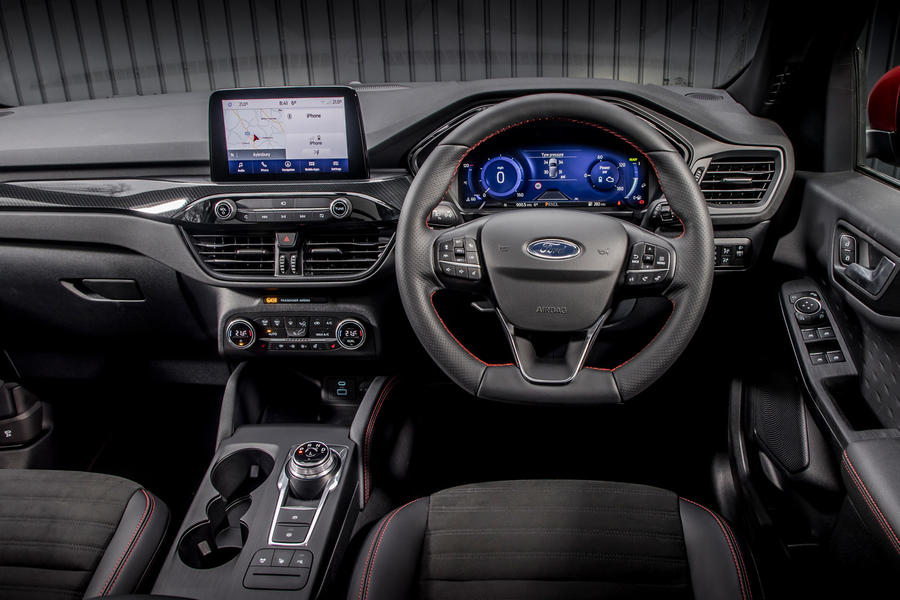 Of course, all these good bits are also available in another Kuga: the PHEV one. It has a higher price (by £2920) but a lower tax bracket and a longer EV range, plus you won’t hear the engine revving away as often.

If you can make the sums add up, that’s where we suggest heading.

Log in or register to post comments
Cobnapint 8 May 2021
@si73 ...I agree. Dual clutch boxes are brilliant on a track. It's a slush box for me every day.
But I couldn't stick the racket with a CVT.
si73 8 May 2021
@ cobnapint, nothing wrong with a slush box, I'd take either over a dual clutch auto, and a slush box would be my preferred choice, but the CVT seems to suit hybrids for some reason, and also, I think, suits small cars, and works really well for town and city use, although what Toyota use on their hybrids isn't a CVT, it only behaves in a similar fashion to one.
Cobnapint 8 May 2021
I think there IS a general dislike of CVT boxes. What's wrong with a normal slush box?
View all comments (9)