Fellow students of car manufacturer price lists will have noticed how widely Ford has started applying the ‘edition’ label to its various models of late. Suddenly everything’s an ‘edition’ of something - even a boggo Zetec.

In that context, if I’d just developed an extra-special Focus ST hot hatchback that I wanted to grab some attention for, I might choose another name for it than, say, Focus ST Edition. Then again, being the only Focus derivative in the catalogue that didn’t have an ‘edition’ after its name, maybe the poor thing was feeling left out.

To some, this’ll sound like it ought to be a stickers-and-stripes kind of exercise, but it isn’t. It’s a five-door ST hatchback that only comes in Azura Blue with a black roof, black wheels, a black roof spoiler and black mirror caps. It has an identical engine and drivetrain to any other petrol-powered ST. And inside it has a fully-loaded equipment specification as standard, and part-leather upholstery with bodywork-matching blue stitching.

But most importantly, it has coilover suspension from KW Automotive with manually adjustable twin-tube dampers in place of the Performance Pack-equipped car’s adaptive ones; powder-coated springs rated some 50 per cent higher than a standard ST’s; and lightweight, flow-formed, 19in alloy wheels.

And if you’re now thinking that modestly priced hot hatchbacks like this don’t usually get really trick, manually configurable suspension of the kind that you might expect to see on track-ready Porsches, AMGs and BMW M cars? Well, you’d be absolutely right. Ford RSs don’t typically get suspension like this, either. 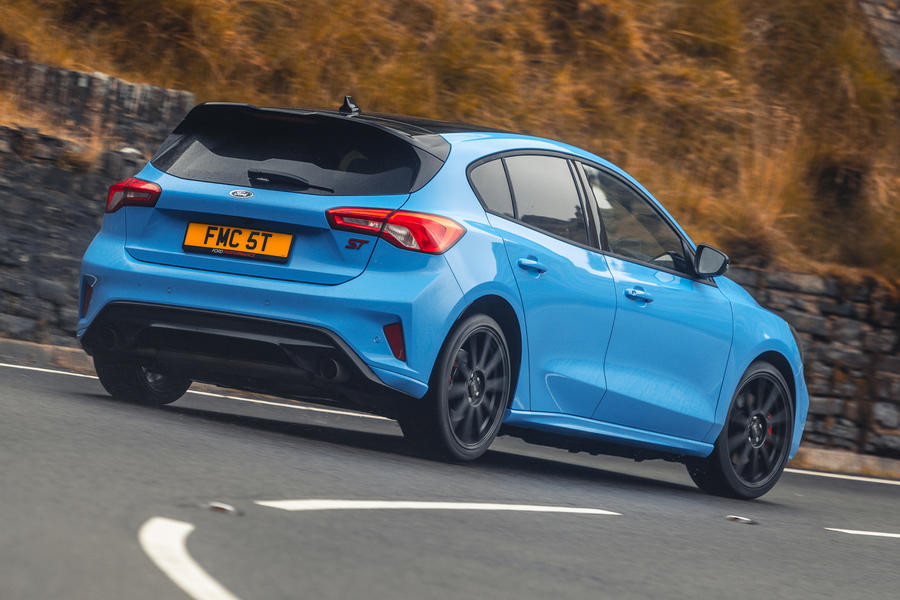 First of all, the new coilovers lower the car’s ride height by 10mm at their default settings, which makes those new rims (which themselves deliver a 10 per cent saving on unsprung mass) fill the car’s arches rather nicely. I’m not usually so keen on black body trim, but the ST Edition’s black roof and mirrors don’t offend me, and its new black-edged ST badges actually look quite good.

Open the boot and you’ll find a toolkit with which to adjust the car’s ride height through up to 20mm at either axle; bump damping rate through twelve presets; and rebound through sixteen-. Adjusting ride height or compression rate is a wheels-off job, and to access the rebound adjustment means removing bits of under-bonnet and boot trim. You’d want to take advice from main dealer before attempting it on your driveway, but it’d be possible - albeit more like the work of a couple of hours than ten minutes. The suspension manual doesn’t list the car’s ‘factory’ damper settings, though, so be warned: once you’ve started fiddling, you may not know what to turn the knobs back to unless you make a note.

The ST Edition has the same wheel geometry and active diff settings as the standard ST, so it’s a fairly mild-mannered thing on a B-road. It doesn’t follow camber or bumpsteer much and, though you can feel the diff working when cornering hard under load, you don’t get much tractive corruption of the steering. The wheel doesn’t jink and squirm in your hands like those of some old RS’s once did, then. Feel is a little heavy and spongy in the car’s ‘Sport’ and ‘Racetrack’ driving modes, but it never gets fighty.

That the car’s ride is noisier than a regular ST’s is what you’re most likely to notice about it. Open, coarse surfaces make the ST Edition’s suspension roar through the uprights and into the cabin somewhat.

It’s a small price to pay for the extra incisiveness, bite and balance that the new suspension delivers, though. The ST was a bit of a specialist in those areas already, but the ST Edition really does turn in very keenly indeed, and doesn’t need asking twice to swivel its hips and rotate mid-corner on a trailing throttle. The car’s ‘ESP Sport’ mode allows you to explore the beginnings of the chassis’s playfulness without intervention; turn the electronics off completely, though, and they’ll stay off, making for wonderfully poised, 90s-hot-hatchback-level handling adjustability when you tee it up just right.

Body control is a few degrees tauter, the car’s movements shorter and more smartly reigned in, than the regular ST’s. Much of the ST Edition’s extra appeal would probably lie in tailoring its setup to perfectly suit your favourite backroad test route or trackday venue, though. The car can feel slightly firmer than a regular ST at low speeds: only occasionally brittle or jiggly, mostly just nicely gristly and tied down.

At higher speeds, some fluency soon materialises. Medium- and large bumps can be taken quickly with confidence and, while a bit of ride dexterity has clearly been sacrificed, the chassis never struggles to keep its wheels on the ground or its body level over complex surfaces. Most inputs are just gobbled up by the dampers crisply, quickly and without jostling you around much.

If it was mine, I might wind a little bit of wheel travel back into the car if I was going to use it exclusively on cross-country roads, and perhaps a little bit of compression damping off at the same time. For track use, you could mess about with relative ride height at the front and rear, to adjust the car’s roll axis inclination and help balance its handling even more to your liking.

It’d be a world of discovery that few other cars of this type would allow you to explore. Or you could just leave it all alone and enjoy what came from the factory, which certainly isn’t screaming out to be fiddled with for the sake of it. It’s really very good indeed. 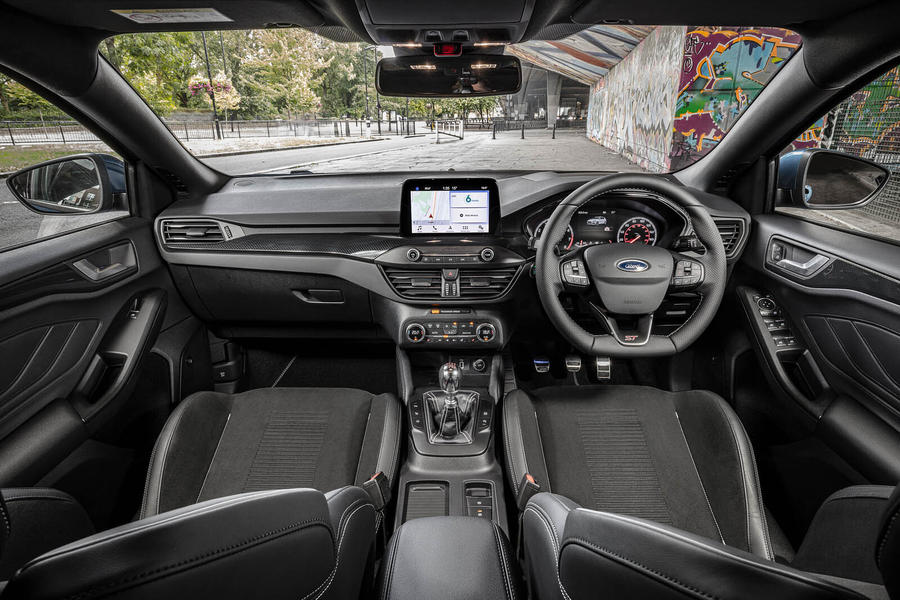 “Hold on. A regular Focus ST is a great-handling car,” you may be thinking, “and I can have one of those in any colour I like.”

You’d be correct on both counts. But a manual-equipped ST hatchback fitted with Ford’s optional Performance Pack and an optional paint colour is now nearly a £35,000 prospect all on its own; so, compared with a regular ST at least, this special version really isn’t over-priced.

If you’re just not the sort of person who likes to get hands on with a spanner and trolley jack - or you just don’t like Azura Blue - go for the standard one. It’s certainly a lot easier to be able to soften off the regular ST’s adaptive dampers as easily as turning the radio on, and it’d also be slightly more civilised company on the office commute.

But, even in its default ‘factory’ suspension settings, the ST Edition is an even more effervescent, involving and accessible entertainer than the regular ST when the roads are enticing and your mood is right (which is no mean compliment), and I have a strong suspicion that, after making the car’s dynamic setup your own, it would start to feel even more special. 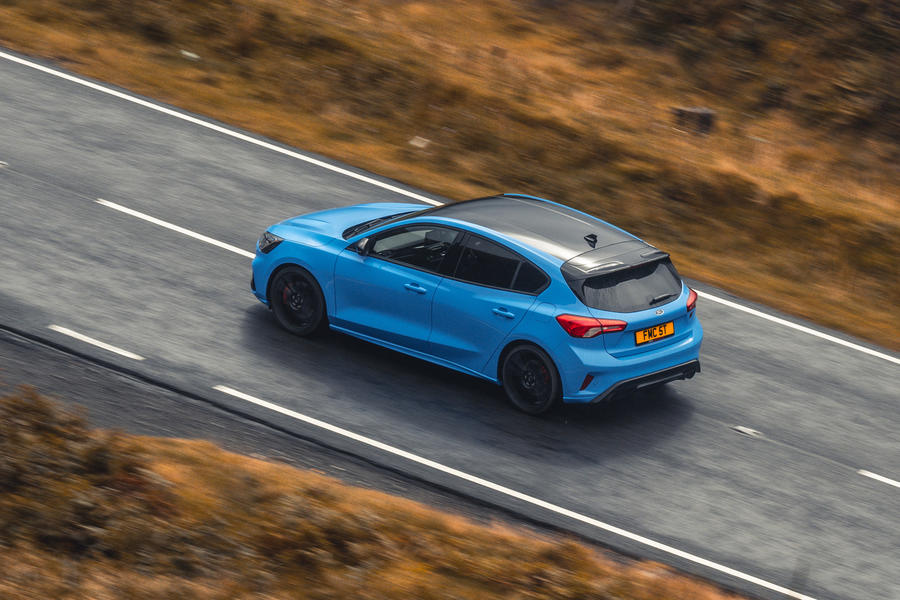 Log in or register to post comments
si73 17 September 2021
I guess it's worth it if you are going to track your car regularly, otherwise it seems a far too time consuming faf, to me, to adjust for different uses, I think I'd stick with a performance pack enhanced ST with its adaptive dampers, although I'd also be tempted to go with a lesser equipped passive damper car, Ford have been great at setting up suspension for road and track use for a long time now, so it would probably be spot on for my use and capabilities.
Yedar 16 September 2021

@peter, because its alot cheaper and less complex than having remotely adjustable damping and preload.