The headline news about the new facelifted Ford Focus ST, the performance version of Ford’s dynamically revered family hatchback, might be that you can no longer buy an orange one.

The colour formerly known as Tangerine Scream has made so many generations of this fast Ford stand out, often every bit as clearly as their warbling five-cylinder exhaust notes ever did.

Well, as of the 2022 model year, it won’t any longer. If you want bright, you can now choose from a couple of slightly more pleasant if prosaic shades of red, or you can have Mean Green instead, which is the latest addition to the ST colour palette. Shame. Green is fine, but plenty of performance brands offer it. There was something quite special about an orange Focus ST - in this tester's estimation, at least.

The car has some fresh styling features for the new paint colour to draw your eye to, among them new LED headlights and many of the new exterior details of the regular Focus, the latest version of which we reviewed earlier this year. There’s the usual enlarged radiator and bumper grilles, side sills and spoilers, too, that you expect to find on a hot hatchback.

A couple of new alloy wheel designs finish things off on the outside. However, as a result of a thinning down of the UK model line-up, we get only one of them: the bigger 19in wheel finished in Matt Magnette grey - while there’s now only one ST derivative trim level available on the UK price list, the old ST-2 and ST-3 versions having bitten the dust. 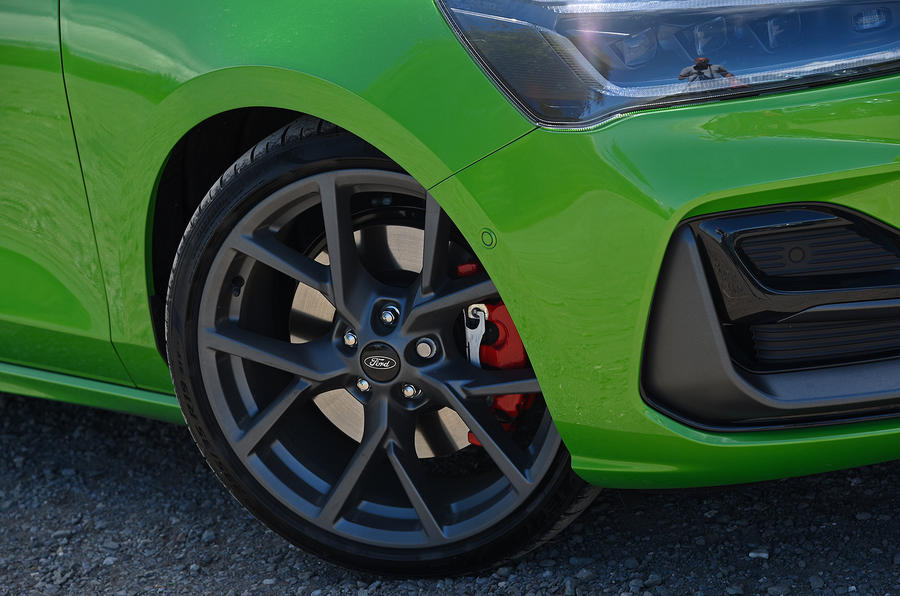 UK-market Focus STs come fairly generously equipped, then, but they’ve also been subject to a near-£3000 price hike, making the regular manual-equipped five-door hatchback a near-£35,000 car and the two-pedal automatic version tested here another £1450 on the top. The Volkswagen Golf GTI is still marginally pricier, but if you like your performance value, the Cupra Leon is considerably cheaper, and so is the Hyundai i30 N.

Have the Focus ST and you get Ford’s latest Sync4 13.2in touchscreen infotainment system as standard (wireless smartphone mirroring and charging included), as well as premium audio by Bang & Olufsen, adaptive LED headlights and Ford’s torque-vectoring e-differential at the front. But you’re still expected to pay £800 extra if you want adaptive dampers and a full suite of driving modes, Ford having added a Track mode to the car’s roster of selectable programmes among few other dynamic changes.

There has been a useful and helpful tidy-up of the Focus's fascia and a rationalisation of its switchgear, the only regrettable product of the latter being that the heater/blower controls have moved into the touchscreen (at least they’re permanently displayed). You still get a backlit physical button for the car’s demister, though, as well as proper deactivation switches for its engine start-stop and electronic stability-control systems and a toggle switch on the left-hand indicator stalk for deactivating the lane-keeping assistance system.

It's a bit like Ford winking at you knowingly in acknowledgement of the fact that there may be a lengthening list of active safety systems that it's obliged to fit to cars like this, but it’s certainly not going to veil them in digital complexity like other brands do or make them in any way hard to turn off. Want to kill the ESC, sir? The button’s right there, next to the easily grabbable volume knob. Can’t miss it. Fill your boots. 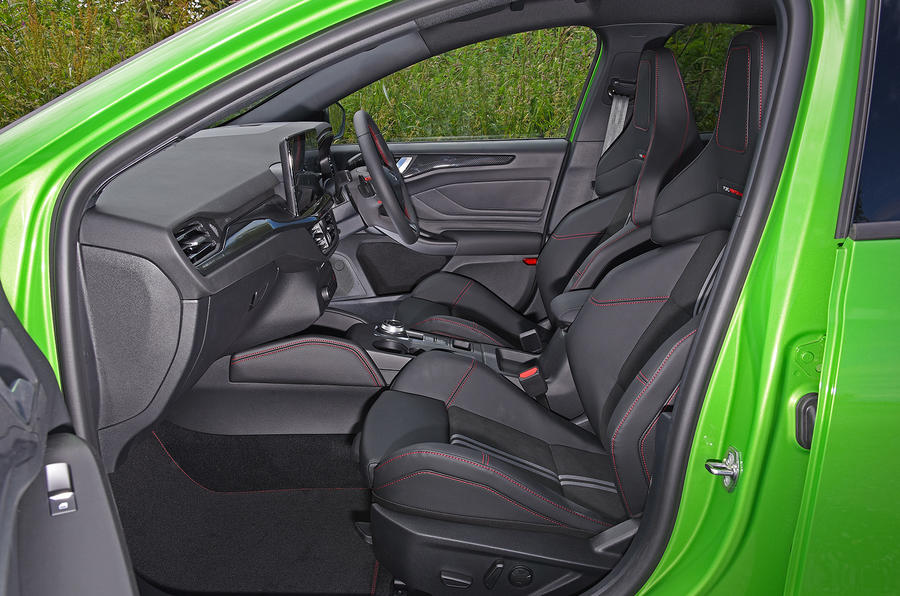 The major addition to the cabin otherwise is a pair of new front sports seats, which have been accredited by Germany’s Aktion Gesunder Rücken (The Campaign for Healthier Backs). They have 14-way power adjustment and four-way-adjustable lumbar support and are alleged to provide an ideal driving position for a variety of builds.

They didn’t quite do so for me. The Focus’s driving position has good lower back support and plenty of effective lateral bolstering, but it lacks enough under-thigh support for really comfortable longer journeys (you can adjust the seat base for height but not inclination angle), and due to the integrated headrest design, it isn’t ideally comfortable for the upper back and shoulders either.

The Focus ST's 276bhp 2.3-litre four-cylinder turbocharged petrol engine is unchanged for this updated version of the car. It’s torquey, decently responsive and lustrously rich-sounding, thanks to an offbeat warble that Ford manufactures via a special resonance device under the bonnet, whose noise gets amplified and augmented through the car’s speakers (so that it’s louder in Sport mode than in Normal). This is no longer a five-cylinder car and hasn’t been for some time, but Cologne tricks your ear rather adeptly that it might just be, and it’s that bit more interesting to listen to than a big-boosty turbo four-pot usually is.

It doesn’t rev that keenly beyond 5000rpm, but it has an addictively potent hit of thrust through the middle of the rev range, right where it’s useful most of the time, and it can carry speed and cover ground every bit as quickly as is sensible on UK roads in 2022, with plenty left in reserve.

The car comes with a six-speed manual gearbox as standard, with a seven-speed torque-converter automatic an option. Sadly, the latter isn’t one of those two-pedal autos that can add everyday commuting versatility to a hot hatchback’s all-round appeal, as quicker-shifting dual-clutchers often do.

It does well enough when just mooching around in D, but it’s a little too given to shift unnecessarily when you’re at a more engaged pace; it doesn’t shift quite quickly or positively enough for a true driver’s car when you’re using the car’s paddleshift manual mode; and it’s also sometimes guilty of slurring shifts at low speed and making you feel less in control of the driving experience than you would like to be. 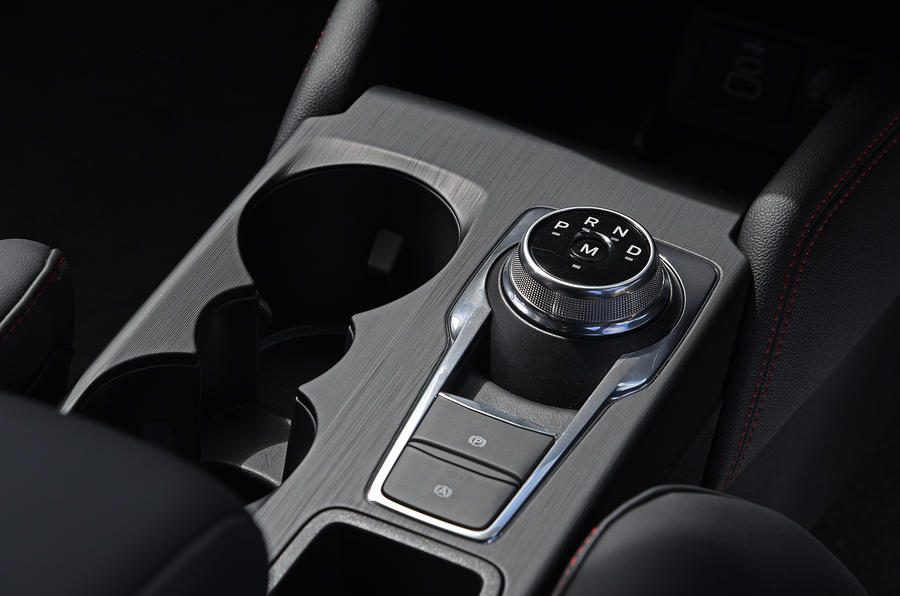 We would have the manual. And, having acknowledged that much, there's certainly a lot less to detract from the Focus ST’s potential to entertain when it comes to handling dynamism. The car’s weighty, keenly-paced steering, its incisive and balanced handling and its body control at speed remain as compelling as anything you might access at the more affordable end of the full-size hot hatch market - and they’re more than a match for most rivals.

This is a car that you can flick around roundabouts so intuitively and immediately, with a flash of your wrists and a couple of well-timed pedal inputs. Even in automatic form, it has a grip level of real mid-corner tenacity and plenty of traction when you’re making a speedy exit from a tighter bend.

The Focus ST offers outright performance and chassis composure blended so skilfully with accessible entertainment value that it remains a true benchmark among its competitors. Some rivals are quicker but more serious-feeling and sometimes less fun. Others are miles more powerful, with four-wheel drive, but manage to make such small marginal gains as a result. The Focus ST remains an enduringly appealing hot-hatch sweet spot.

The one minor black mark for it concerns tyre specification. In search, perhaps, of greater track performance or the finer steering precision brought about by stiffer sidewalls, Ford has switched from Michelin Pilot Sport 4S tyres for this car’s 19in wheels to a new-compound Pirelli P-Zero - and, adaptive dampers or not, they have made the low-speed ride a little more noisy and clunky and the secondary ride at speed a little more poorly isolated. It’s an uncharacteristic move for Ford, whose performance models have a long-time association with Michelins.

We didn’t get the chance to test the car on track, however, and to find out what it may have gained in the compromise. But wherever you want to enjoy your driving, we suspect this car is still well-primed to entertain you. 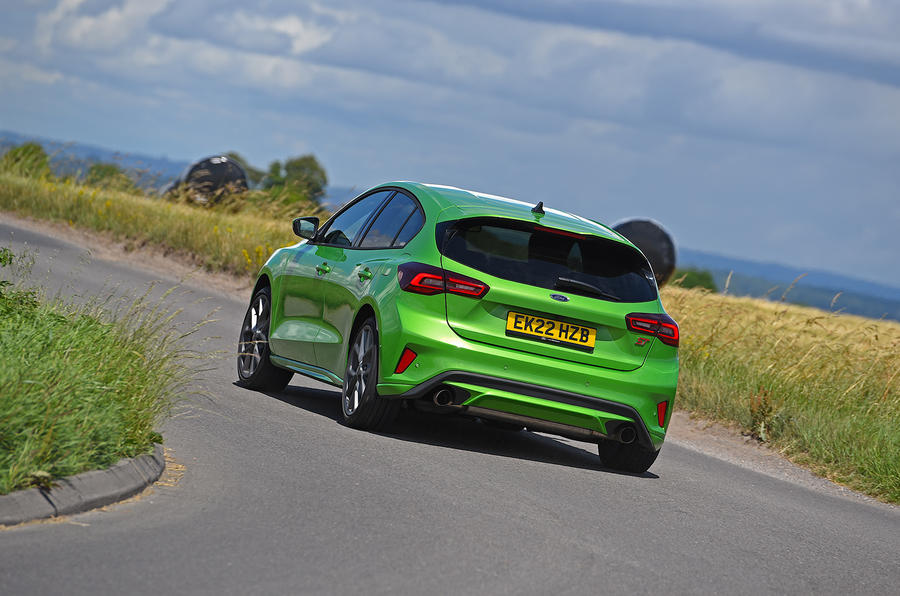 Here we go again, put the price up Ford - then when it doesn't sell withdraw from the UK market citing "insufficient volumes to be viable". In the meantime numerous other European OE manufacturers show now American-managed Ford of Europe what can be achieved by commitment to te UK customer enthusiastic hard work - while Ford looks forward to making massive profits on their (mediocre, though still over-priced) EVs. Blame "don't anyone dare sell a car without making a big profit" James D Farley Jnr, in it for the short term share price, so long Ford.

Not noticed the impact of the global issues going on? Steel/Aluminium are up in cost, shipping prices are ridiculous its inevitable that costs are going to be passed on, its not just Ford.

Should be double that to be competitive with a diesel, let alone an EV.

Its a high performance petrol hot hatch, why and more to the point how is it meant to be competitive with a dull box diesel?

SAS32 8 July 2022
Maybe the transmission feels ill suited to the ST because instead of installing a snappy dual-clutch, Ford decided to turn the existing 8 speed torque converter box into a 7 speed but with software only, so it simply skips 2nd gear.

“The Focus ST 7-speed automatic transmission is based on the 8-speed. The enhanced power and torque of the 2.3-litre EcoBoost engine makes the standard 2nd gear ratio redundant, therefore it is removed for the Focus ST to optimise gear differentiation for performance,” Ford of Europe
product communications manager, Finn Thomasen