9
Ford’s hot hatch formula for the class-leading Fiesta ST has been applied to the 276bhp Mustang-engined Focus ST. Does it work?
Open gallery
Close

Normally, we would not begin a review of the latest, possibly greatest hot hatchback with a reference to Ferrari, but bear with.

When Ferrari launches a new car, journalists are invited to its Maranello HQ and are ritually subjected to a tableaux of complicated graphs and diagrams. It’s dry but oddly compelling, and reasonable on the part of the manufacturer: the chassis electronics even for mainline models such as the 488 GTB have become bewilderingly complex works of art and Ferrari would like us all to appreciate that.

Ford pulled a Ferrari for the fourth-generation Focus ST. Justifiably, too. This is a complicated car: an ocean of binary code away from even the last ST, which was launched in 2012 with nothing like the same spread of technologies.

We’ve seen graphs that plot torque from the upsized engine against the locking rate for the front axle’s electronic limited-slip differential. The hardware comes from GKN and is controlled via a locking clutch not unlike VW's 'XDS+' system, so while the red line assigned to Track mode (yes, there are now modes) rockets up in a way that, one senior engineer tells us, would probably help the newcomer lap a quick circuit such as the Nürburgring faster even than in the old Focus RS, its orange counterpart – Slippery mode – is reassuringly gentle. There’s also brake-based torque vectoring to trim understeer, which not so long ago would have itself been the headline news but is now merely part of the scenery.

Another graph tells us the continuously controlled adaptive dampers, which are reactive to the road surface but respond in just a couple of milliseconds, exert roughly twice as much force in Track as in Normal. Admittedly, to get access to the full, multi-mode functionality, you’ll need the optional Performance pack (otherwise the dampers operate only in a Goldilocks setting between Normal and Sport) but even that includes further programmes for rev matching, launch control and, goodness gracious, 'flat' shifting for which you needn't even lift off the accelerator pedal if you’re close enough to the redline. Deprived of context, you might think we were talking about the latest Porsche 911 Turbo.

Despite all its tech, though, the Focus ST is at its core a familiar device, with a transverse four-cylinder turbocharged petrol engine mated to a six-speed manual. It has been engineered to be an enjoyable everyday performance car with some track day potential but excellent road manners. Like its closest rivals, it remains solely front driven, which keeps both weight and cost reasonable as well as preserving those traditional and – if the sensational Fiesta ST is anything to go by – still much loved hot hatch handling traits.

The Focus ST will also come with an seven-speed torque-converter gearbox, in 187bhp diesel form, and as an estate (not in that combination, mind), although the car we’ve driven is the straight-up five-door petrol hatch, complete with a stick and three pedals. 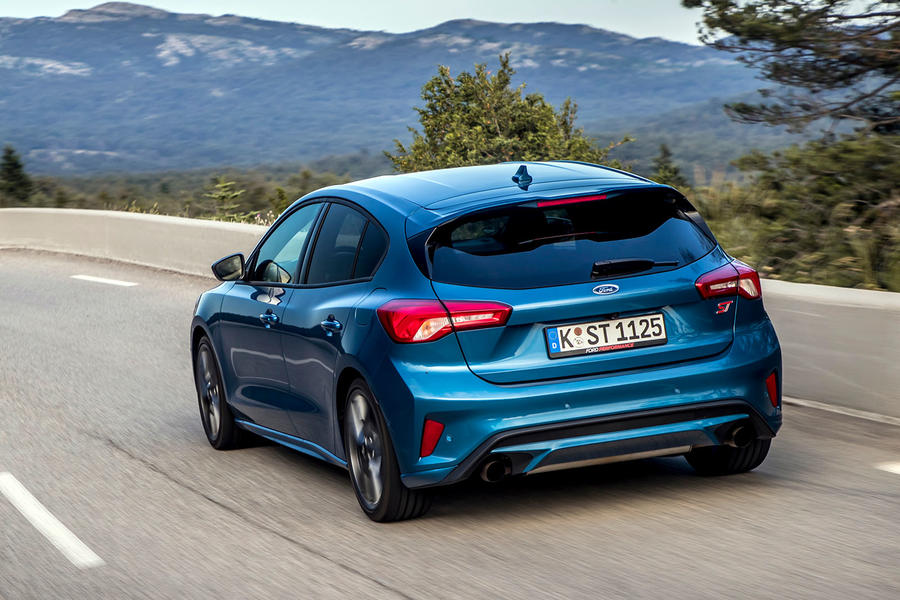 Does familiar mean predictable? Not in this case. In an industry obsessed with reducing cubic centimetres, that engine is an overhauled version of the 2.3-litre lifted from the entry-level Mustang and uses a version of the anti-lag system first seen on the Ford GT supercar. The 276bhp it develops is competitive, if unexceptional, but 310lb ft is almost a fifth up on the old 2.0-litre Focus ST and the highest output in this class. Through the mid-range, Ford says, its new car is quick enough to see off the old Focus RS. Later this year, our road test telemetry will show if that’s actually the case, but with closer gear ratios and so much torque pushing against less weight, it's certainly plausible.

Meanwhile, the sprint to 62mph is done and dusted in 5.7sec – an improvement of 0.8sec on before and about as quick as it’s possible to go without rear driveshafts. Top speed is less important and capped at 155mph. However, the fact that ST prototypes regularly nudged 170mph on the autobahns near Ford’s big base at Cologne hints at excellent aerodynamic efficiency. That matters if you care not only about bragging rights but also rolling refinement and fuel economy, which is rated at 34.4mpg combined. And yet, if this car needs to excel in one single area, it’s chassis dynamics.

From testing garden versions of the new Focus, we already know the lightweight C2 platform provides a basis for the some pretty stellar handling traits. The ST sits 10mm closer to the ground with unique steering knuckles, firmer bushes and new spring and damper units some 20% stiffer at the front and 13% at the rear, which uses Ford’s unequal length double-wishbone architecture. With no changes needed for the body-in-white, thicker anti-roll bars, and bigger brakes with electromechanical actuation, round off the major mechanical revisions.

Ford has made no secret of its intention to imbue the Focus ST with the character and dynamite drivability of its little sibling. As a marketing exercise, what an excellent way that is to set yourself up for a very public fall, but the same engineers who worked on the Fiesta ST evidently know what they’re doing.

Many hundreds of columns will be written about this new car over the coming months, but to cut to the chase, during our short test drive, it proves immensely good fun, with a pretty compelling blend of everyday manners and mischievous handling. Possibly a class-leading one.

Initial thoughts? The engine wants to be the centre of attention. It’s a bit ordinary in the Mustang but exerts its full personality in a humble Focus, spinning with an offbeat heave that can make it seem like there are five cylinders under the bonnet rather than four. With no active exhaust, there’s a generous degree of sound ‘enhancement’ for the cabin, but much as this will irk the purists, it’s well judged.

As now seems to be the norm with European fast Fords, there is also quite a bit of flywheel effect when you lift off the accelerator, but response is otherwise conspicuously good for such a large unit, and after hitting like a sledgehammer between 2500rpm and 4500rpm, it revs freely to the redline. The powertrain gets a big tick.

The next element to vie for your attention is the steering, which is quick. With a ratio of 11.3:1, it’s quicker than that of the Ferrari 488 GTB, in fact, and takes a moment or two of acclimatisation for its off-centre response to feel less nervously joystick-like and just clinically direct. In terms of feel, it’s not quite got the grit of a Renault Sport Mégane or the gloriously natural heft of Honda’s Civic Type R but has a clean and linear elasticity that’s similarly involving.

The accuracy of the rack then allows you to explore the Focus ST’s handling, which you’ll want to do often. Track mode untethers a playful side but disable the stability control and the ST becomes as wildly flamboyant as you can handle.

It’s recognisably Fiesta ST in this regard, with the grip generated by the front Michelin Pilot Sport 4S tyres providing the foundation for controllable lift-off oversteer. On a trailing throttle, you might get some rivals – notably the Hyundai i30 N and the RS Mégane – to behave in this way, but none does it so neatly or with such a basic and natural enthusiasm.

The positives continue. Mid-corner stability is very good, if not quite a match for some of the more hardcore hot hatches, and body movements are nicely controlled. Through quick direction changes, it can seem as though incipient pitch and roll motions – and, it must be said, the Focus can at times feel a touch too nose-heavy – will develop into something quite substantial. It rarely gets that far, the suspension acting forcefully but deftly, and you’re left with a car that fluidly communicates any remaining reserves of grip and balance through its stance but rarely becomes too much of a slave to the physics. In short, it’s good, quick, confidence-inspiring fun, and while the new electronic differential is effective, never is it overbearing.

Finally, and briefly: Ford's engineers say that while the Focus ST is primarily developed for road use, it shouldn’t feel out of its depth at the trackdays many customers frequent. The brakes, with their larger discs, are said to resist fade four times better than those of the old car, and use an electronic booster that adjusts the biting point to keep pedal-feel consistent. Ford has also fitted a ‘torque disturbance reduction’ system to the EPAS, which dials out torque-steer by counter-torqueing the column when the e-diff gets punchy. Both elements seemed decently beneficial after successive committed laps of Lommel’s fiendishly tough Track 7.

Equally, those engineers are also realistic. They’ll freely admit a Honda Civic Type R develops massive, nailed-down stability and is better suited to track work. And they’ve deliberately plotted a different course for the Focus ST. Nimbleness over stability, and useability over raw lap times. The two cars will inevitably be closely compared, but it’s important to remember they espouse contrasting approaches to the hot-hatch recipe. 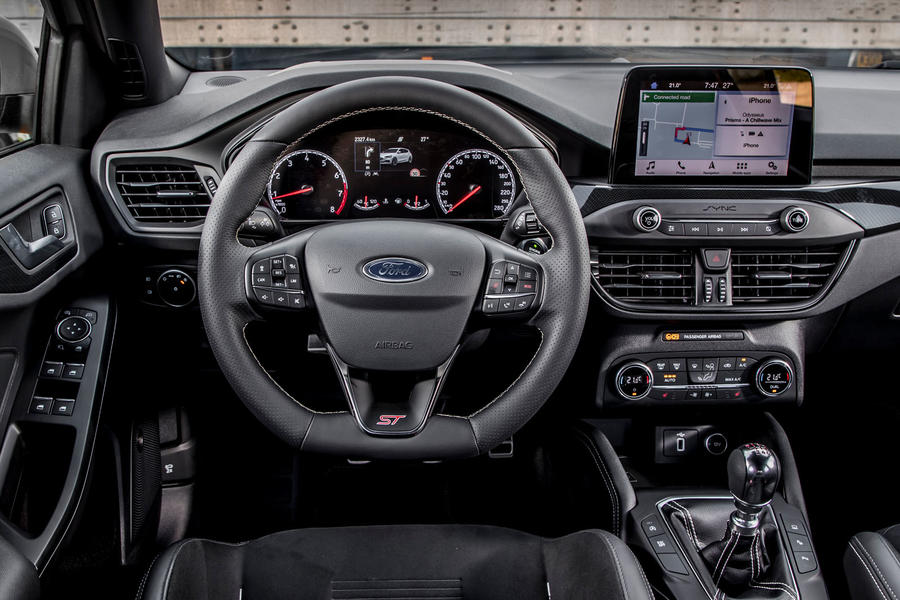 Crucially, the Focus ST seems an extremely rounded, practical device – a key part of the brief, but one that’s sometimes missed in this category. Like a normal Focus, the boot holds 375 litres and, with its long wheelbase, the latest generation is near class-leading for passenger space.

Testing on UK roads will paint the full picture, but on the tougher tracks at Ford’s Lommel proving ground, backing the dampers off also reveals ride quality that is unquestionably a match for the Volkswagen Golf GTI – something for which you can thank all those Welsh development miles.

The price is £31,995, on top of which we’d spend £800 for the Performance pack, if only for access to Track mode. Perhaps that all sounds a bit expensive, but this is now the going rate for a top-tier front-drive hot hatch, and if you regard the RS Mégane and Civic Type R as being worthy of that outlay, the same most certainly needs to apply to the Focus ST.

Consider also that because eight in 10 owners of the previous car opted for equipment-rich ST-3 specification, that is now the only trim on offer.

But forget the numbers for a moment, because this new Ford feels a lot like it could be the missing piece of the puzzle in a closely fought segment. It isn’t the sharpest-handling hot hatch or the easiest to live with, but it blends those conflicting worlds skilfully and with considerable charisma. 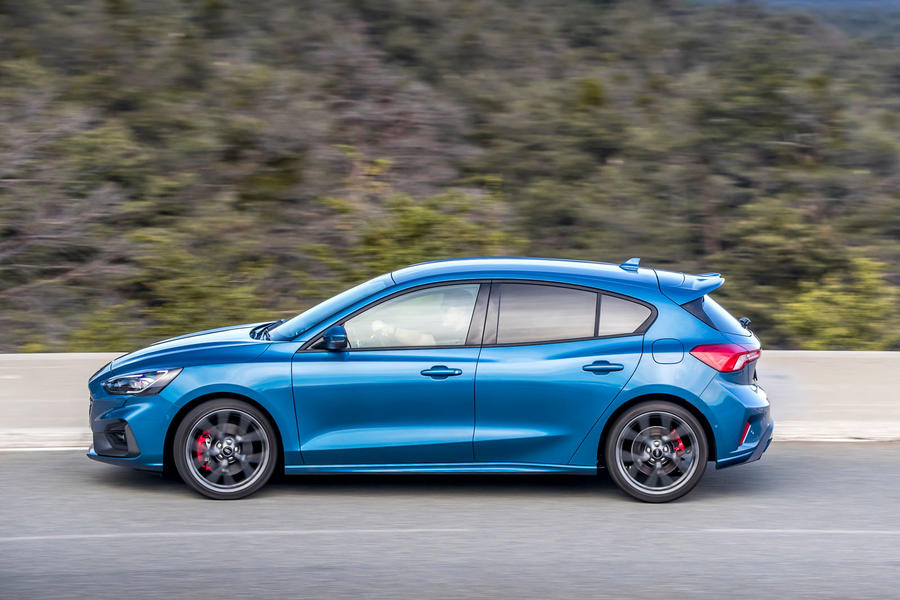 It's fitted with a torque converter auto -hooray.
Simpson12 2 July 2019

Very impressive at the same time, i'm going to be making - was stupendous! Thanks so much.

Pretty much the perfect family car, except...

... Not too many families I know could afford one. My friends and associates aren't ballers and bankers but they aren't exactly broke, either. Cars seem to be very expensive now.
View all comments (12)