In an era when you can get illuminated belt buckles on a car (take a bow, the Mercedes-Benz S-Class), the new Fiat 500 Electric does without a radio.

Let that sink in for a moment. In Action trim, admittedly the base level, you have to plug in your phone to listen to any music. Fiat isn’t the first to tap into this, but for a car so focused on style and youthful appeal, it says something of where we might be heading in the future.

And do you know what? It works brilliantly.

This is the entry level new 500, with a 94bhp electric motor powering the front wheels. In the Action version, there's a floor-mounted 23.8kWh battery, giving a total range of 118 miles, 0-62mph in 9.5sec and a top speed of 84mph.

Charging times are from as little as 30 minutes if you hook up to a 50kW DC charger, while a 7kW home-charger will do it in six hours.

There are three driving modes to choose from, all operated by a simple toggle switch. Normal does what it implies, as does Range, while Sherpa is a get-you-home-at-all-costs mode, trimming top speed to eke out the maximum range.

There's also a 42kWh battery available, giving a total range of 199 miles and punchier acceleration figures. But that makes the 500 up to 150kg heavier, so there’s something appealing about the purity of the Action.

Unlike rivals like the Honda E and Mini Electric, you can also buy the 500 electric as a laundalet, although not in Action trim level.

For the time being, the electric 500 has a unique platform, but you get the feeling that it won’t be long before Stellantis looks to get it working across more cars under its corporate umbrella. Fiat itself acknowledges that it’s a flexible platform whose wheelbase can be extended, increasing its cross-functionality.

Interestingly, the petrol Fiat 500, which was recently updated with mild-hybrid engines, will continue to be sold. Fiat hasn’t put an end date on that car yet, although the suspicion is that it will be quietly allowed to die as more people jump into the electric version.

The electric 500 is slightly longer, wider and taller than the old 500, but it’s still a small car that’s easy to thread through a city. And despite the growth, rear-seat space is still at a premium. Adults will fit back there, but they won’t thank you over a long journey.

The rest of the interior is a lesson in simplicity, especially in Action trim. The single rounded dial keeps information to a bare minimum (speed, energy flow and range) and the radio/sat-nav is your phone sitting in a dashboard-mounted cradle.

Fortunately, there are still physical buttons. The radio volume is a rotary knob down by your knee and the air-con controls all lie mid-way up the dash. It goes to show that switches don’t necessarily create a messy interior.

In a very Fiat sign-off, there are some nice design touches on the interior, like the Turin skyline silhouetted on the dash cubby and the old 500 outline sketch within the door handles.

A bit clichéd, perhaps, but the pièce de résistance lies in the first 12mph of any journey. The car plays some classical music to set you off in the right frame of mind, audible to both the cabin and pedestrians - Armacord by Nino Rota, for the classicists among you. A nice thought, but quite what it will sound like on a wet day in Tyneside is anyone’s guess. 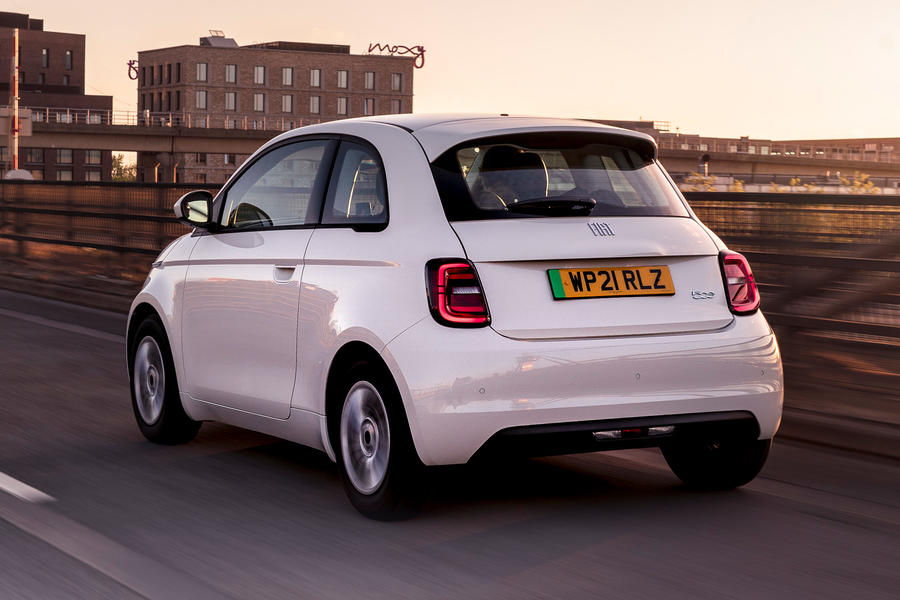 Still, it’s a point of difference and one that does genuinely make you smile – as does the rest of the car. With just 94bhp, this is no pocket rocket, but it’s a light-hearted car to drive. The body roll is well controlled, so you can fling it through corners much faster than you would expect. The steering is entirely dead, but it’s precise and doesn’t suffer any kickback through mid-corner bumps.

Obviously, a B-road thrashing isn’t the point of the 500. But it’s nice to know that if you do get a section of open road, it can be a rewarding car.

The actual point of the 500 is short, urban hops, and for that it’s perfect; its compact size ideal for threading through cities. Equally, though, if your commute includes a section of motorway, the 500 is up to the task: although its top speed is just 84mph, it’s perfectly capable of zipping along at 70mph.

What impresses is how well damped it is: the suspension is well set up for UK roads. The damping and suspension control are generally very good, absorbing most imperfections easily and generally flowing across the asphalt smoothly.

One downside is the short wheelbase, because a series of bumps can upset the 500, but overall it’s a comfy car. 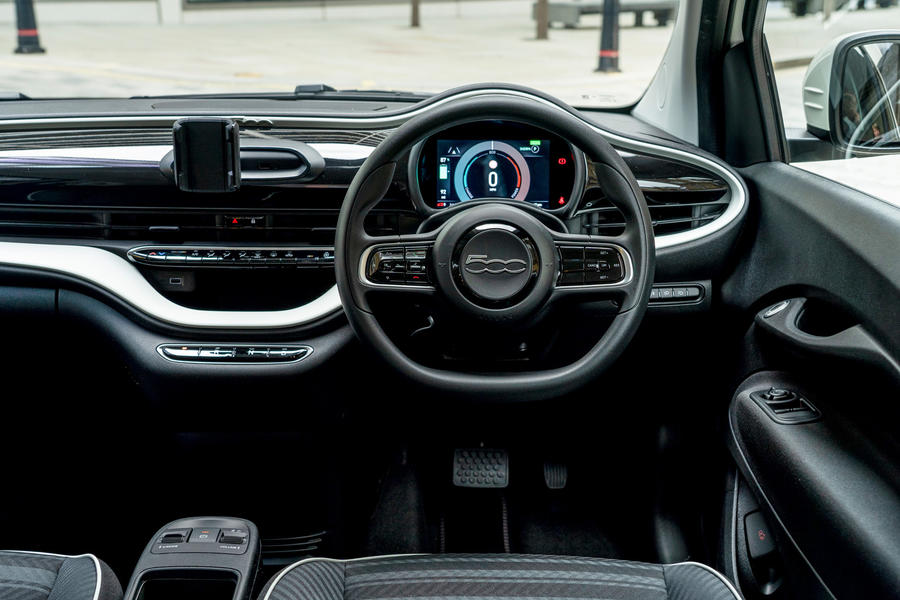 Before I drove this 500, I was a bit concerned about its theoretical range of 118 miles. But in an hour-and-a-half of hard driving, its energy reserve dropped to only 59%. Colder conditions would hammer it more, but it shows that this is a car that should be functional for most people.

As ever, it comes down to what you need your car for. If you need to do more miles, obviously this version isn’t for you. But as a short hop commuter car, there are few better options.

It feels to me like this is the perfect application for an electric car: small, relatively lightweight and usable. 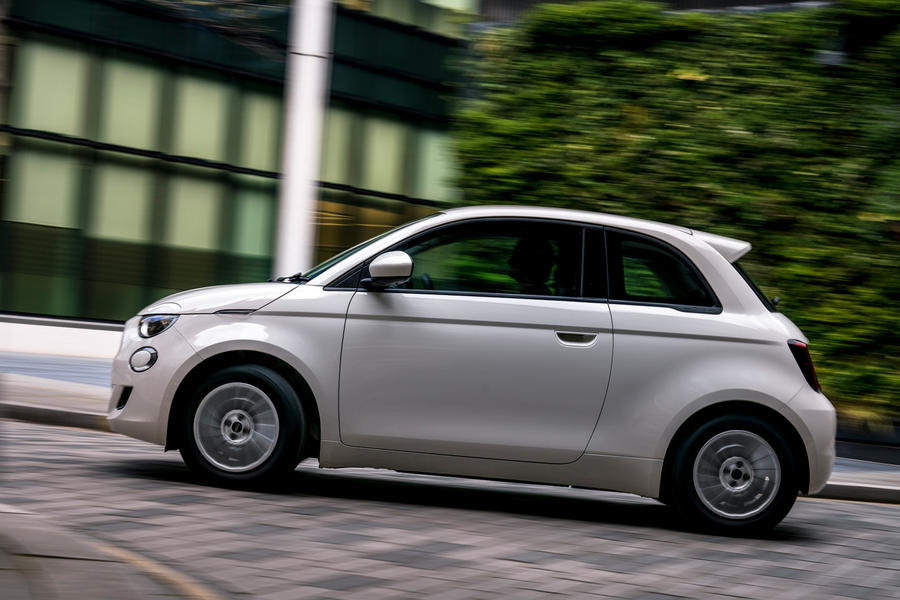 Quite how long that grant will be available for is anyone’s guess. Inland Revenue needs to make money out of EV buyers at some point.

Not really so ‘affordable’ when compared to its sister model.

Love the 500 though, so with more juice it makes sense.

Amarcord btw is movie music for the 1973 Fellini film of the same name. Pleasant enough, but not exactly a classical piece.

Faustcar 23 May 2021
About to order one for my daughter- this is a great little car and excellent for most needs. Saw someone comparing it to a Mini Cooper in price - spent some time in both for city driving and the Cooper has no chance, even if you take the environmental impact out of it.
View all comments (20)