As names go, they don’t get much more literal than this. The Ferrari 812 Superfast is the latest super-GT car from Maranello, the newest in a long line of front-engined V12s, hence the ‘12’ in the title. It replaces the F12, which wasn’t exactly unsuperfast itself, what with its 730bhp and everything.

How much power, Raffaele de Simone, Ferrari’s chief test driver and lead engineer, is too much? “If you have control, it’s never enough,” he says. Righto. Control, mind, was one of the things that the recent, limited-run F12tdf did not offer in quantities to match its 770bhp. The spiky, angry, hard-to-drive special edition felt like it made double that power when it arrived in doses so heady that they overwhelmed a chassis featuring a rear-steer system seemingly intended to confound both itself and its driver. 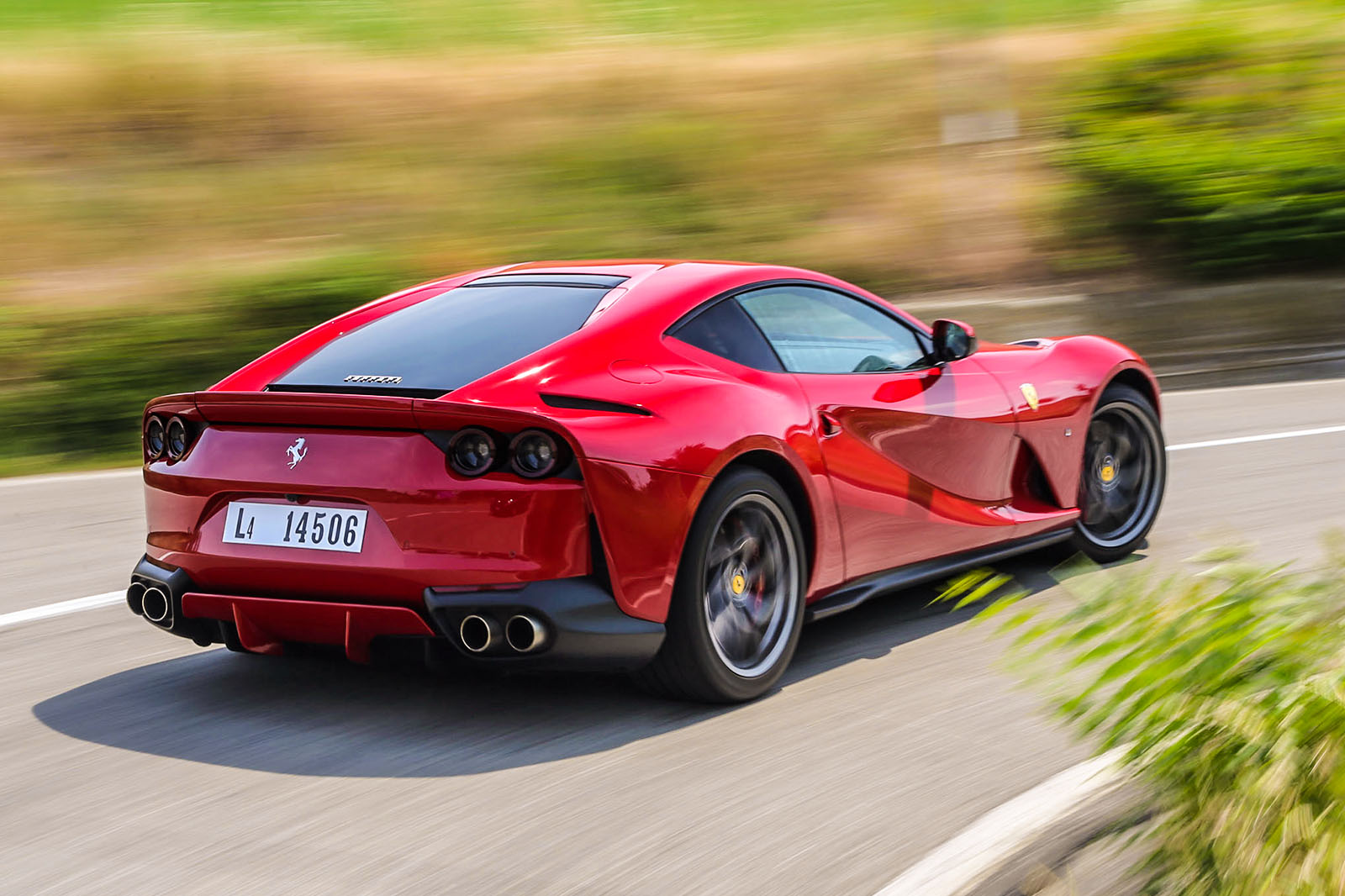 Ferrari called that system a ‘virtual short wheelbase’ but, in effect, it did precisely the opposite. By steering the rear wheels in the same direction as the fronts it was adding stability – virtual length – to the tdf’s wheelbase, in an attempt, at which it would mostly fail, to tame a chassis that had been made deliberately unstable by fitting extremely wide front tyres. Their grip and willingness to turn made the tdf feel extraordinarily agile for its size, but combined with the extra power, they also made it impossibly lively, but that was okay because it was a limited-run model only for those in both the club and the right mood.

This new 812 Superfast, by way of contrast, is a regular production model, potentially driven by anyone, whatever their mood. So, naturally, it gets precisely the same tyre sizes as the tdf, the same rear-steer system, and even more horsepower. Gulp.

But hold on. Here’s yer man de Simone again, telling me that the 812 Superfast is, in fact, easier to drive on the limit even than the F12. Which is no bad thing. The tyres are regular Pirelli P Zeros, the rear-steer system has been honed and tweaked, and it now talks, along with the electronically controlled differential, the stability control and the drift control, to Ferrari’s first application of electrically assisted power steering, itself replacing a hydraulic set-up. It’s all damnably clever.

Meantime, the rest of the news. This V12 engine’s block made its debut in the 6.0-litre Enzo of 2002. Since then it has grown in capacity and changed in internals and ancillaries and heads and so on, but the block casting itself remains precisely the same. It reached its maximum bore a while ago, but here, now, stroked out to 6.5 litres, it is as large in capacity as it can possibly be.

Is it approaching the end of its era, then? Not a bit of it, says Ferrari. Yes, it now has a fuel injection system that operates at 350bar (up from 200) and a redline at 8900rpm, but there’s still more to come, apparently. Given that it’s a normally aspirated petrol engine with an already hyperefficient intake and exhaust cycle, that can only mean one thing: new materials that will let it spin faster, so in its next incarnation it should rev past 9000rpm, easily. I mentioned it’s a 6.5-litre V12, right? How wonderful.

Obviously economy and emissions have to improve, too. The new cleaner injection system helps. So does the stop-start system cutting the engine when you’re decelerating past 5mph, although that does feel weird. Peak power is at 8500rpm while peak torque of 530lb ft is at 7000rpm, so you suspect this V12 will thrive on revs. Still, 80% of torque can be had from 3500rpm. And let’s face it, when peak power is 789bhp, even half of that is a fair chunk. 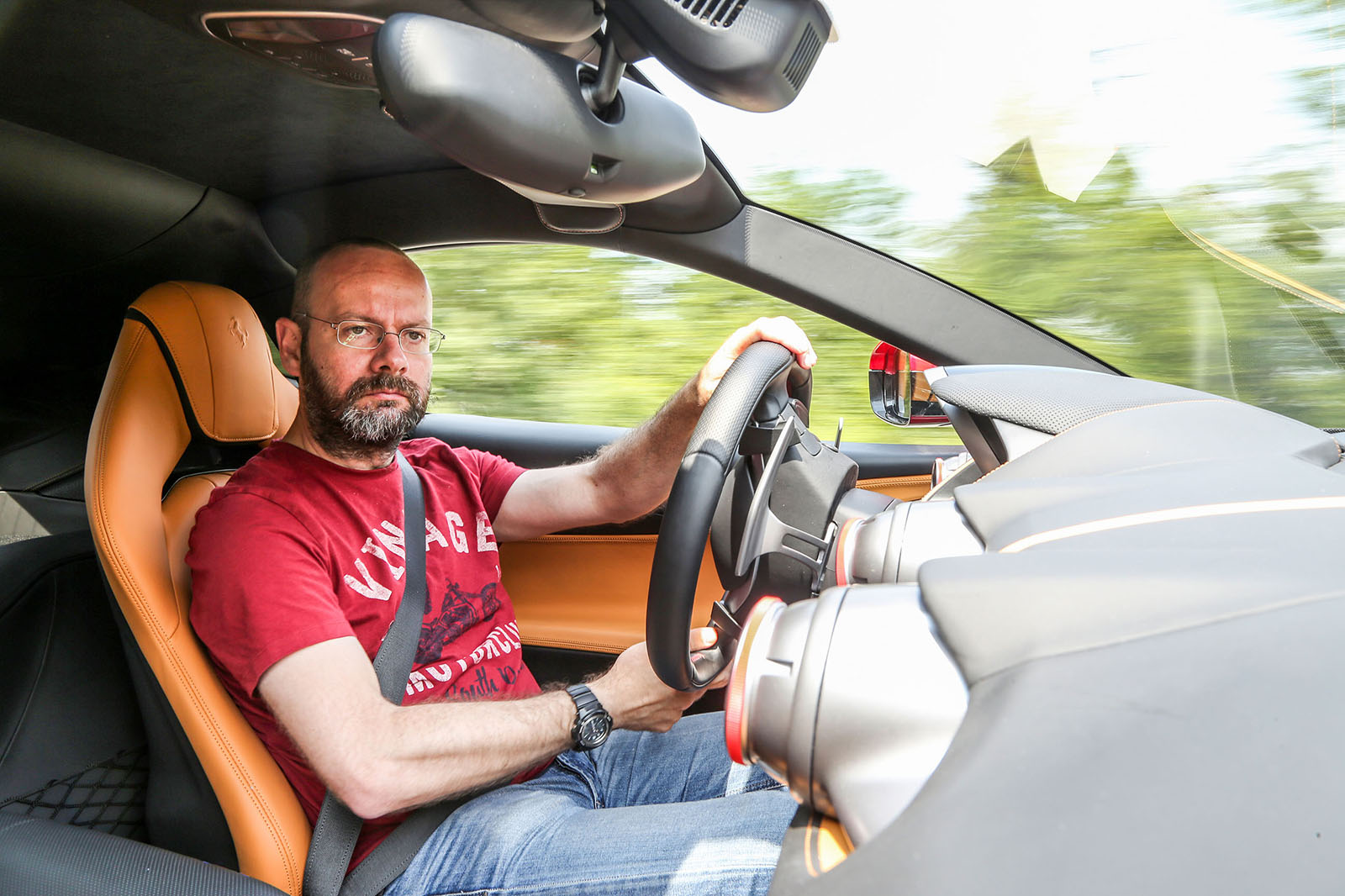 The V12 is mated to a seven-speed dual-clutch automatic gearbox, and because the ’box is at the back, it gives the 812 the same slight rearward weight bias – about 53% – as the F12 had before it.

The body structure is largely unchanged from the F12, too. It’s different at the front to accommodate EPAS, not HPAS, and at the back to fit the rear-steer. But, some stiffening fabrication differences aside, it’s little altered.

Still, 60kg did come out of the F12’s construction: through lighter electrics and plumbing, sound proofing and endless pressure on suppliers. But the stronger engine and rear-steer has put the lot back in again. So claimed weight stays at 1630kg (call it just over 1700kg on our scales, given that we tested an F12 at 1715kg). Which is a fair whack.

It’s aggressive to look at. There are aerodynamic details aplenty to pore over, plus a vast open frontal grille, or “smile”, Ferrari calls it, which is to friendly smiles what eating your kids is to childminding. Inside there are two seats, a driver-centric instrument stack, a supplementary instrument binnacle for the passenger (very cool) and a bit of oddment storage. Behind all that is a hatch with a decent-sized but high-temperature boot. 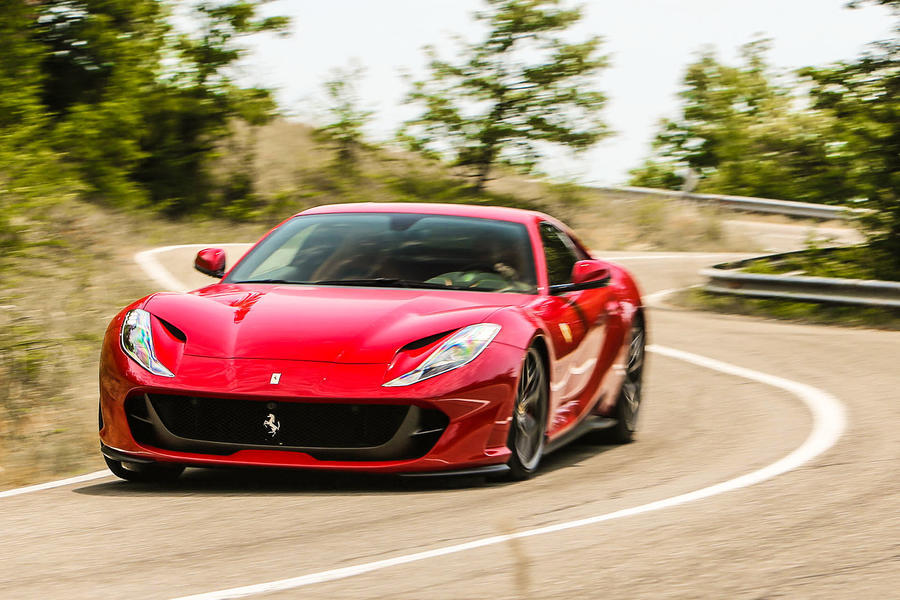 There’s apparently less soundproofing in the 812 than there was in the F12, but on start-up I doubt you’d tell. Ferrari people say they want to let in the good noises but not the bad ones, but the difference between volumes inside and outside the car is vast. From inside, the V12 barks and fizzes, but the overriding impression is one of a perfectly smooth – and razor-sharp – engine. From outside it sounds like the atmosphere is being cleaved in two.

Engine response is fabulous. Oh, it’s tractable enough and you can leave the steering wheel dial in Wet or Sport and the gearbox in Auto and it’ll bimble about at low revs all day long, but you’ll be wasting everybody’s efforts if you do that. When I tell you that the throttle map is slightly softer than a tdf’s, I might as well be telling you that tungsten is slightly easier to melt than carbon. It’s still more wickedly responsive than, by my reckoning, any other current production car’s engine. Lamborghini AventadorLamborghini aside? Perhaps. But perhaps not.

What that means is that the 812 is bafflingly, shockingly urgent; aggressive and hard but cultured and rounded. There is never a bum note or semiquaver played out of time. It is at once the most powerful series production Ferrari ever built, with a 7.9sec 0-124mph time, and yet also the smoothest engine you can imagine. They used to say that when you bought a Ferrari you paid for the engine and got the rest of the car for free. I kinda get the gag, but obviously it’s a dreadful cliché. And it sells the chassis woefully short.

Ah, the 812’s chassis. Now here’s a thing. One minute, there you are, telling everyone who’ll listen that 800 metric horsepower is utterly ridiculous in a road car, a complete waste of your and my time when, frankly, the 197bhp of a Toyota GT86 is perfectly enough to be getting on with. And the next minute you’re shifting out of third at the 8900rpm limiter in an 812 Superfast and thinking you wouldn’t mind a jot if it was a 912 Extremelyfast.

Because they’re right, you know, the 812 is an accessible car to drive quickly, up to and – after you’ve taken a few deep breaths, had a cup of tea and learnt to relax into its style – beyond its limits.

The devil’s in the tuning, I’m sure. There are so many systems hooked up to an 812’s dynamics that it would be easy to get it wrong, to have a car that feels nothing like as natural and dependable as, say, Aston Martin a benchmark V12 front-engined handler like an Aston Martin V12 Vantage S or Vanquish S. But they’ve actually gone and done it, you know. They’ve made this thing quite brilliant – and feel relatively natural – to drive. 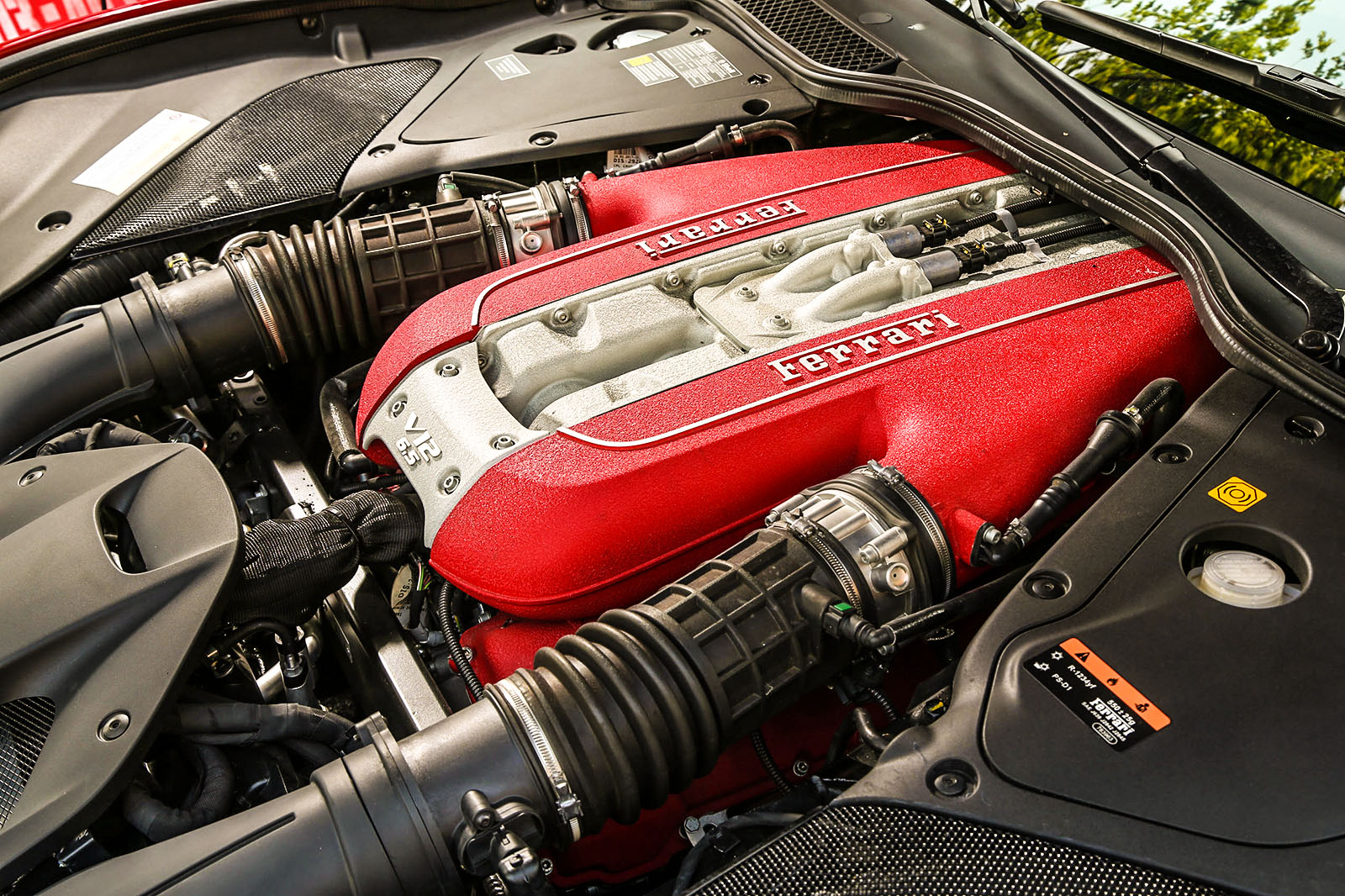 The steering is light, as ever, with the same ratio as the F12, so it’s around two turns lock-to-lock and, while that makes it feel nervy just off straight-ahead, after brief acclimatisation you learn to live with its energy. There isn’t a vast level of feel, but there never was with Ferrari’s hydraulic system, either. What the steering does tell you is passed on in nudges and hints, so it’s better to release your grip on the wheel because the car appreciates smooth inputs. That way you can take it up to its limits without upsetting the balance of what is, let’s not forget, a relatively heavy car. You wouldn’t know that from its capability, or from its agility, or from its carbon-ceramic brakes’ seemingly unstoppable stoppability, but weight there is.

The gearshift is probably the finest dual-clutch in motordom. Its easily flicked, fixed paddles unleash the fastest upshifts and most quickly brapped downshifts in the business. They’re so fast that at the end of a straight – on road or track – you find yourself waiting longer to activate them, taking advantage of the smoothness of braking in a single gear, then grabbing them one after another quickly as you turn.

Turn in ambitiously, at low speed, and the 812 can understeer a bit, but at faster speeds the rear-bias makes it neutral at least, lively at most. Then, on the way out of any corner, at any speed, 789bhp makes the rear move as much as you like – and when the Superfast slides, it does so quickly but controllably.

The engine’s sharpness means it’s better to stay strong on the accelerator and wait for the vehicle speed to gently match the wheel speed, lest it slip clumsily back into line. Unlike with a turbo, there’s no engine hang when you lift-off to keep the rear tyres spinning which, I think, is a reason the mid-engined 488 GTB is even easier to mess around with than the 812 Superfast.

But that the 812 Superfast is this easy at all is absurd. When it does slide, the steering wants less torque to countersteer than it does to add more lock. If you do it naturally you’ll hardly notice; if you don’t, it’ll help you out.

Only once in a day’s driving, not long after I got into it, did the 812’s steering torque build up when I wasn’t expecting it, which is probably me clumsily acclimatising. After that it felt entirely natural. 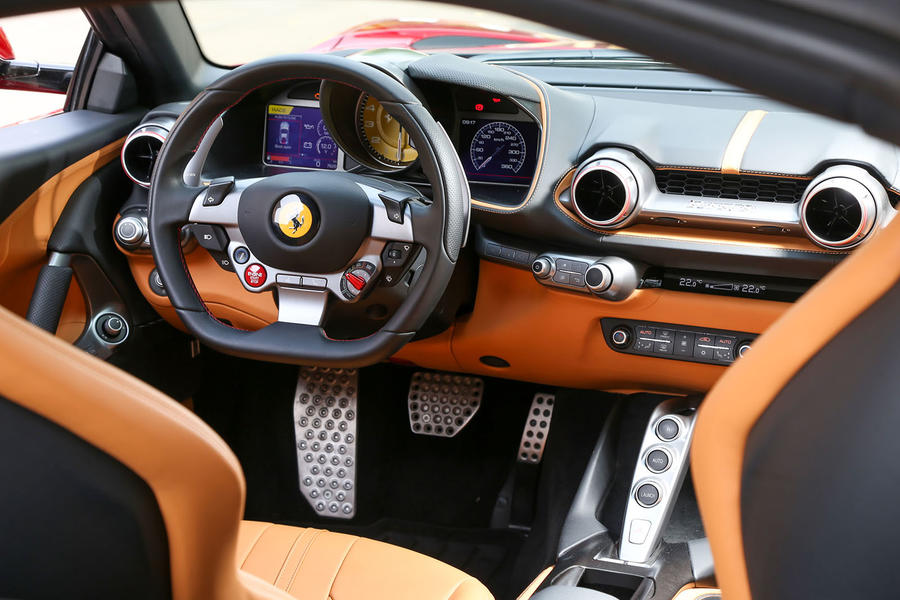 Hell yes. The rivals are few and far between, nonexistent at this performance level, and few feel this comfortable to push hard in. The 812 feels less natural, perhaps, than an Aston Vanquish S’s, which feels an altogether lazier, perhaps more analogue experience. Preferring a Vanquish to an 812 would be like taking a roll-top bath over a Jacuzzi: there are reasons why you would, but technologically and experientially, the Superfast offers more.

More than anything else in this class? No doubt, although “nothing is ever perfect,” says de Simone. That’s true, but no other super-GT car has yet come this close. 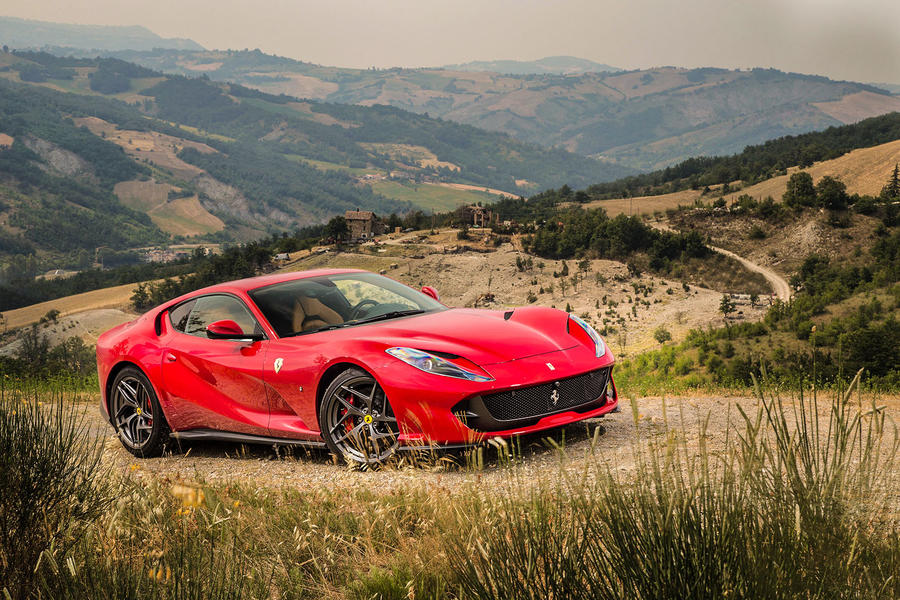 Inside and out. Even American cars look better than this monstrosity. They couldn't even be bother to make the little screens on the dash a unique shape, just got some Chinese replacement phone screens off alibaba.com for a couple of quid.
bowsersheepdog 20 June 2017

No eraser for my wishlist

Ferrari still haven't come up with anything anywhere close to as pretty as the 612 Scaglietti. Although, to be fair, neither has anyone else, so being as how they did come up with the 612 they're still winning. And my lottery money would still go on the 612.
wilsonlaidlaw 20 June 2017

The front grille is more of a hungry leer than a smile.
View all comments (10)