From £253,0009
Is the latest front-engined V12 special out of Maranello as terrifying as the last one?
Open gallery
Close

Enter, then, the latest special Ferrari that you have to be invited to buy. It’s the 812 Competizione and, as is the norm with different generations of Ferrari, it gets a different name rather than just being, say, another ‘GT3’ or ‘LT’. This car’s forebears are the F12 tdf and the 599 GTO.

It’s based on the ‘ordinary’ 812 Superfast, whose 789bhp 6.5-litre V12 has been tweaked even more as the Competizione’s centrepiece, with titanium conrods, new pistons, a 3%-lighter crankshaft and redesigned heads with sliding finger followers between the camshafts and the valve stem (because they cope best with very aggressive cams and high revs). Now the engine revs to 9500rpm and makes an additional 30bhp while doing so, for 819bhp.

At the 2015 launch of the F12 tdf, Ferrari’s engineers thought there was one more generation of development left in the big V12. This is that car but, legislation notwithstanding, there might even be a little more yet.

The F12 tdf’s throttle response was, though, massively aggressive, even at low revs. Too responsive. It’s what Ferrari thought its customers wanted at the time. Getting a big front-engined V12 car to be hyper- responsive isn’t easy, so they put huge tyres on the front and then set about taming it. Just not quite enough. This time around, they say, they looked for a car that’s a little more drivable – although still one with huge, 275-section front tyres.

Both stability and agility are meant to be aided by the third generation of Ferrari’s rear-steering system, which it calls Virtual Short Wheelbase.

Usually, rear-steer systems turn the wheels in unison, either in the same direction as the fronts to aid stability at high speed or against them to increase low-speed agility. In this iteration, though, the rear wheels can steer independently of each other. So they toe in under braking to add stability, then they go back to pointing the same way as each other at other times.

Then, finally, there are the aerodynamic upgrades, which couple with cooling upgrades and some new design touches. The lateral slash across the bonnet is meant to shorten the look of the vast front section, but it lets air out of the engine bay at its edges, too.

A larger front grille lets more air at the radiators and the carbon-ceramic brakes. Thus the underbody is flat, without the regular 812’s fins that push air to the wheel wells, so more air now travels at speed beneath the body to the vast rear diffuser.

The titanium exhausts sit at the very edge of the body, possible because new petrol particulate filters negate the need for a muffler at the rear. And while carbonfibre vanes are absent from the underbody, they do feature on the rear deck, nudging fast-moving air outwards towards a full-width rear spoiler. 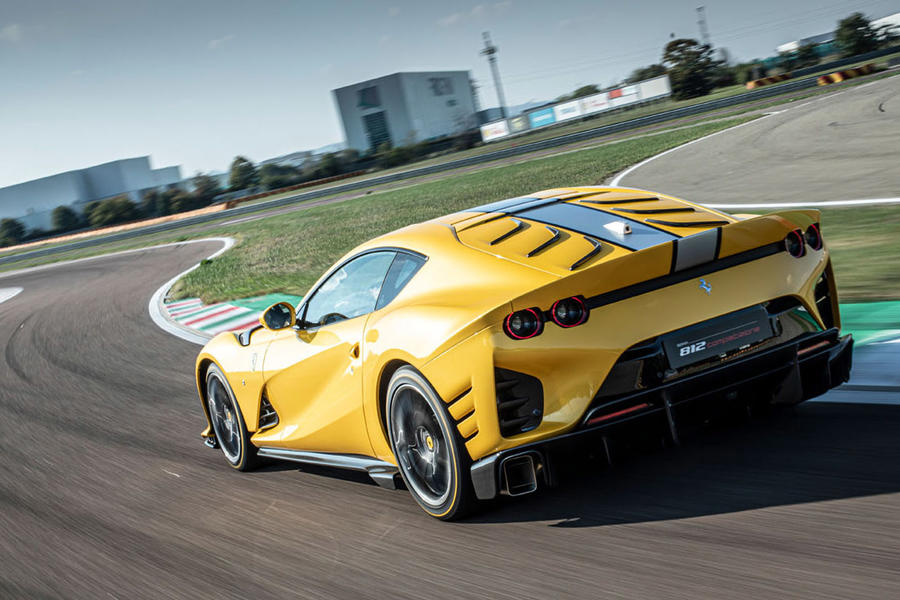 Appropriately, then, our drive was limited to Ferrari’s Fiorano test track, rather than on the road where the opportunities to exercise 819bhp are quite limited. It’s also where I scared myself silly in an F12 tdf.

The 812 Competizione doesn’t scare one silly. It’s still tremendously exciting (anything that slams into a 9500rpm limiter with this verve could be nothing else), but it’s a much more complete, rounded car with it.

It’s agile. The huge front tyres and active rear steer do disguise the weight. That’s claimed at 1487kg dry and 38kg lighter than an 812 Superfast, which we weighed at 1725kg fully fuelled. Likewise Ferrari’s now-trademark light, accurate and quick steering.

It helps settle the car and keep the nose planted if you trail the brakes into a corner, but even under power accelerating into quicker turns, it’s still very responsive. Yet it settles into balanced cornering easily, too. It’s trustworthy and, even with this amount of power and speed, communicative and reliable.

It’s not as balanced or playful as, say, the Porsche 911 GT3 or Ferrari’s own mid-engined supercars, the F8 Tributo and SF90 Stradale, but given that it has 819 naturally aspirated horsepower and absurdly fat front rubber, it’s relatively easy to feel comfortable with.

Inside, the architecture is largely 812 Superfast, but with plenty of carbonfibre, to which, inevitably, you can add even more via the vast options list. 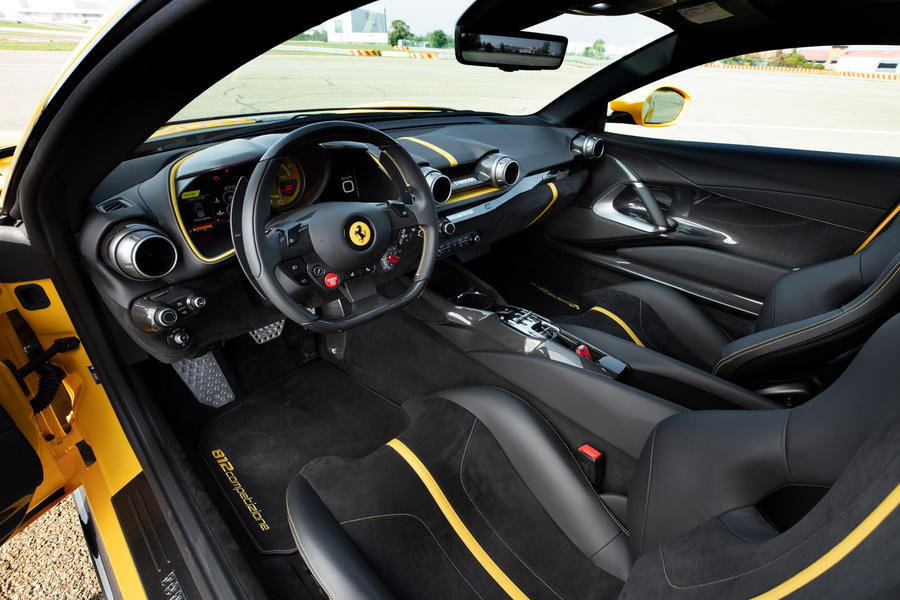 Not that it matters. All 999 examples have been sold to people who, Ferrari says, tend to keep their specials as a loved part of a collection and rarely sell them on quickly. As a thing to keep and cherish, they’ve always been special. This time, it’s also terrific to drive. 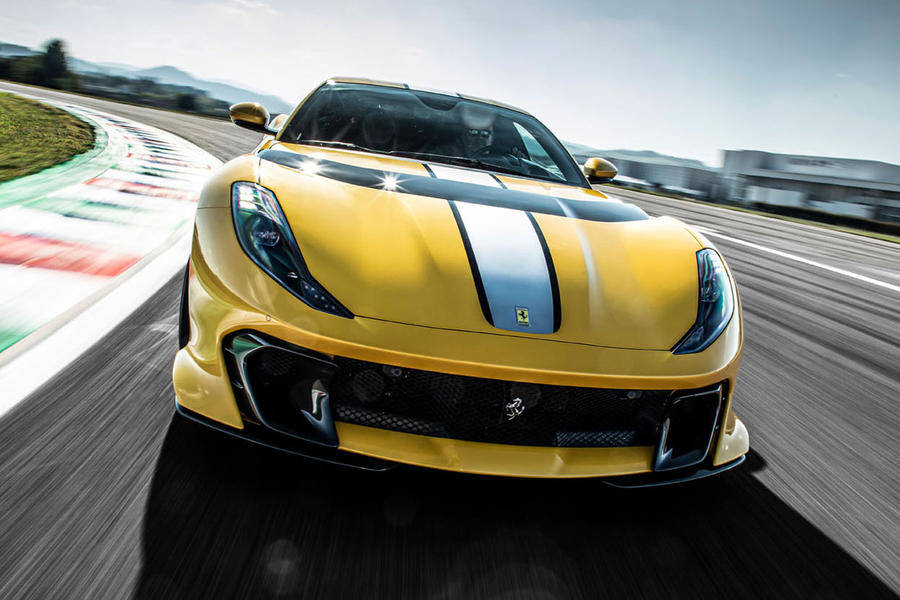 Log in or register to post comments
jason_recliner 11 November 2021
@ Just Saying. Why would Autocar aim a story at buyers of an invitation only car that's sold out? Matt is a great writer, it's a great impression of a car I'll never even see let alone drive, and it's far more interesting than yet another press release about yet another VW.
Just Saying 11 November 2021
Matt is a brilliant writer, I agree.
He"s written many an interesting VW piece too.
Does Matt choose his own stories or does his editor?
This car we'll be long forgotten by tomorrow and like you say, never seen.
Bill the Lizard 10 November 2021

I suppose Nero was Italian. Now where did I put the fiddle?

Just Saying 11 November 2021
Hardly a crisis Bill the Lizard. But I get your well made point.
Just Saying 10 November 2021
This article is more aimed at wealthy Ferrari collectors rather than Autocar readers.
Know your readership!
Thank you.
View all comments (7)