When, as a young man, Joop Donkervoort began importing the Lotus Seven to mainland Europe, he hit a problem. It wasn’t road legal, so he had to make some minor alterations. It would appear that in the intervening 42 years, he hasn’t stopped.

This is the Donkervoort D8 GTO-JD70, built to celebrate Joop’s 70th birthday and hence restricted to 70 examples. It’s based on the regular D8 GTO, which, beyond being a roadster with its engine in front of its occupants and rear-wheel drive, has moved on quite a lot further from that Lotus than the Caterham Seven has in the intervening decades.

There’s still a mainly-tubular steel chassis, welded at Donkervoort’s Lelystad factory in the Netherlands, but it’s mated to structural carbonfibre, which is also produced in-house; Donkervoort’s factory does manufacturing, not just assembly.

All in, the chassis weighs just 54kg yet has 20kNm/deg of torsional rigidity. Pushrod-wishbone suspension is fitted all round.

For a time, Donkervoort ran Cosworth power. Then it struck a deal with Audi for a V6. It reverted to Cosworth when this fell through before coming to a new arrangement to use Audi’s 2.5-litre five-cylinder engine, as found in the Audi RS3, thanks to Ulrich Hackenberg, Audi’s then-technical director, liking the idea.

That was the start of the D8 model line, which proved to be a spectacularly fast racing car; with a roof on it, the D8 GT won its class at the Dubai 24 Hour in 2011. Customers wanted it as a roadster, though, so here you have it: the D8 GTO, with ‘O’ for ‘Open’.

Latest emissions regulations mean the engine now has a petrol particulate filter. This mutes the exhaust sound so much that there’s no need for a big muffler under the boot floor, so the exhaust exits at the side. This in turn creates room under the boot – whose contents no longer get cooked, happily – for a diffuser, while there are louvres in the front cycle wings to ease frontal lift.

Donkervoort cars have become gradually, and to these eyes attractively, ever more aerodynamic over the years, to the extent that the JD70’s top speed is now 174mph.

Some 415bhp probably helps in this respect, too – a mammoth amount for a little car. This drives through a five-speed manual gearbox with relatively long ratios (the five-pot is a torquey engine that became only more flexible with the latest emissions-related update) and a limited-slip differential. There’s also adjustable traction control, optional ABS and optional power-assisted steering. 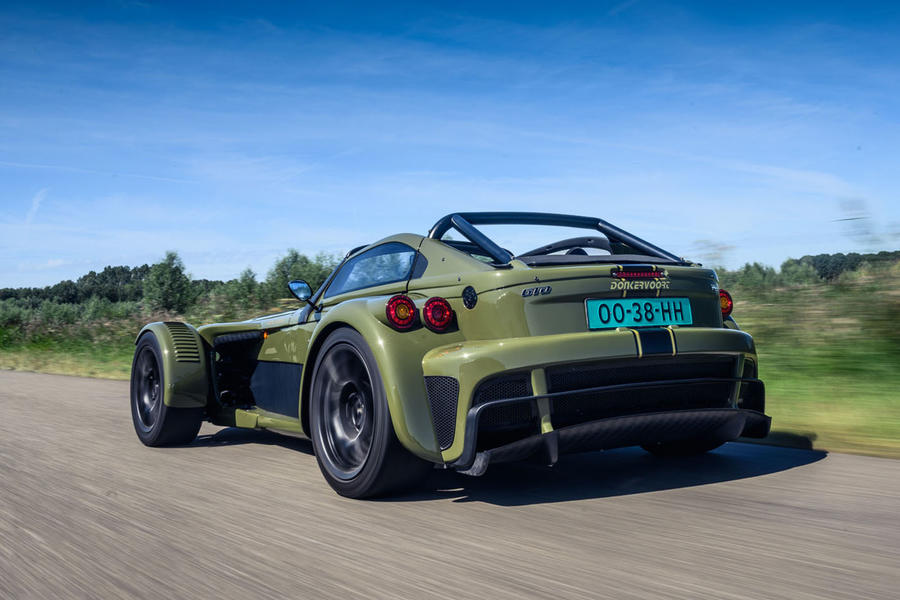 The JD70 feels really nicely put together. Engineering isn’t left on display in quite the same fashion as in an Ariel, but the finish is terrific. You can specify various carbonfibre weaves, and they look great.

The driving position is spot on, too: bathtime comfortable, Caterham-style, with a little elbow interference from the driver’s door but less elbow-bashing with a passenger. With the doors in place, turbulence is low and the cabin is habitable and comfortable, with clearly laid-out dials and high-quality switchgear. The deep boot can swallow a good amount of kit, too.

These facets – plus weather equipment – are what makes a Caterham a better weekend-away car than an Ariel, and the JD70 moves it on another level.

The car we’re driving here is Joop’s own – number 22 of 70, in a signature green with a very subtle gold metallic flake that zings in sunlight. He may be 70, but evidently he’s still hardcore: his JD70 has no ABS, PAS or optional air conditioning specified, but it does have optional carbonfibre seats and six-point harnesses.

At parking speeds, the unassisted steering, even though it’s 2.7 turns between locks, is fearsomely heavy. However, it lightens on the move as we head out of the factory’s industrial unit, which is built on land reclaimed from the sea, so the area is largely flat, with straight roads or right-angled bends.

The Nankang AR-1 tyres (235/47 R17 on the front and 245/40 R18 on the rear and the same variety that Jonathan Palmer fits to the Caterhams at his Motorsport Vision operation) are said to be capable of holding 2G laterally, but we won’t get them hot enough to try that today.

It doesn’t matter, because the JD70 gives you plenty to do and enjoy all the time. It rides pretty well, thunking over expansion joints but otherwise with good composure. The five-speed ’box has a heavy but very short and precise throw, while the pedal weights and positions are great too. Some low-volume makers get this sort of ergonomic thing wrong: Donkervoort isn’t one of them.

It’s blindingly quick. Peak torque is 413lb ft, developed from 1750-6350rpm, while peak power arrives from 5850rpm and is claimed to hang around until the 7000rpm hard limiter. If there’s turbo lag, it doesn’t have much inertia to overcome, so it’s easily boostily responsive at low revs and thumpingly, wildly fast further up the rev range. In its upper echelons, the five-cylinder offbeat is pleasingly audible, too; it’s less notable at low revs, because of gear whine and general exhaust chatter.

And this car handles. The Audi five isn’t the lightest engine ever fitted to a two-seat roadster, so the steering always remains beefy, and I know that a Caterham or Ariel would feel more fingertip-agile. But the JD70 turns willingly and grips well, even on cool tyres, before nudging into steady state understeer and then, with only modest throttle, pushing its tail wide quickly but predictably and entirely naturally and controllably.

I didn’t get too carried away; cars with steering this heavy take quite a lot of catching, and I didn’t fancy explaining to the Donkervoort family why their old man’s car was nose-upwards in a drainage ditch. But it’s a hell of a lot of fun and thoroughly sorted. 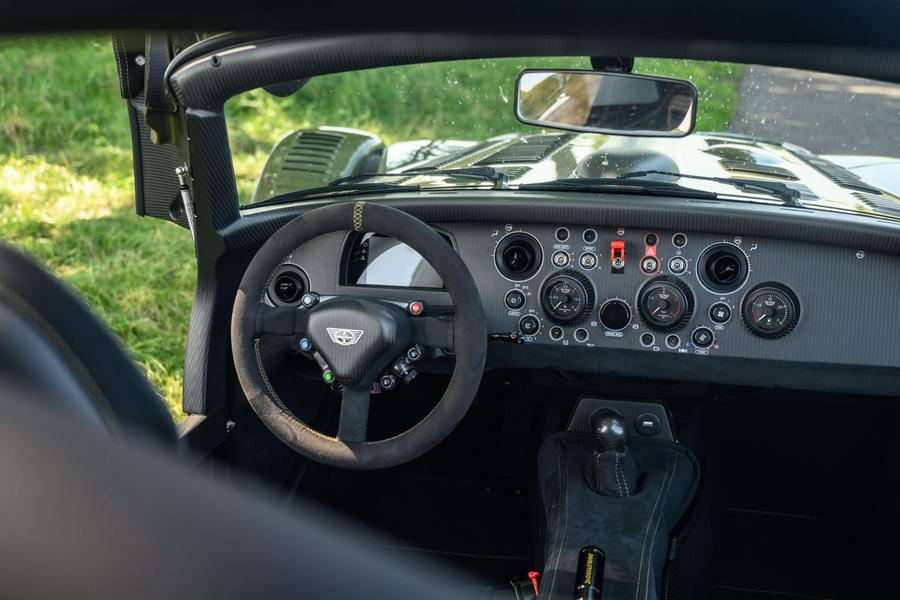 So why don’t the British – a nation so fond of low-volume sports cars that Donkervoort comes to our shores to find some suppliers – buy Donks in, well, any quantity?

That’s tricky if you think a high-spec Caterham or an Atom is a direct rival. Less so if you consider this a beautifully finished, raw, stripped-out supercar alternative, with power to spare, involvement overload and one of the world’s most charismatic modern engines. I’m more inclined to the latter. I love it. 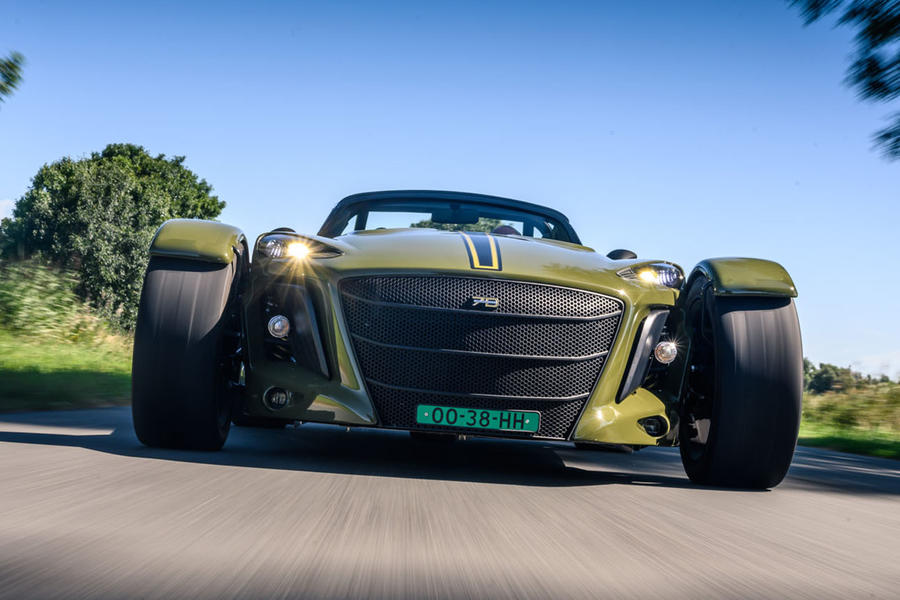 Pity its so pricey, looks so

Pity its so pricey, looks so much better than a Caterham or a Westfield, as good as those two are to drive I just cant get past their looks, I liked the C21 but it didnt do very well.

It's like the evil spawn of an unholy union between a Morgan, a Caterham 7, and Robocop.

The Ferrari question is daft; anyone buying one of these probably already has at least a couple of Ferraris, unless they prefer Lambos or somesuch.

My daft comment is therefore "If only they could do something along similar lines for around £60k... "

If you can afford it

then go for it. What an absolute blast.
Which reminds me, its 7pm and time to get my euro lottery ticket.
I'll let you know if I win!
... Sure.
View all comments (4)