From £25,660
Can this new plug-in hybrid fulfil the potential we saw in the initial petrol variants?
Share
Open gallery
Close
Share review

Why we’re running it: To see if there’s more to this funky plug- in SUV than a tax-friendly CO2 rating 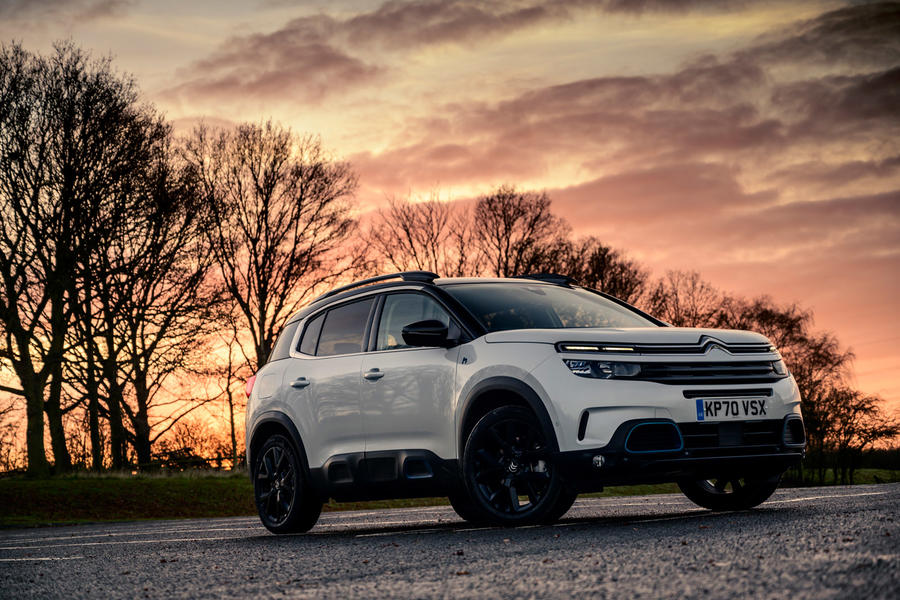 The C5 Aircross recently spent a week in the care of Oli, our videographer. His usual long-termer, a comparatively puny Kia Picanto that he runs for Autocar sibling title What Car?, had recently left the fleet, so he was after a car with a big boot to get him and his equipment to that week’s shoots. From the look of it, the Citroën’s 460-litre hold was more than up to the task. 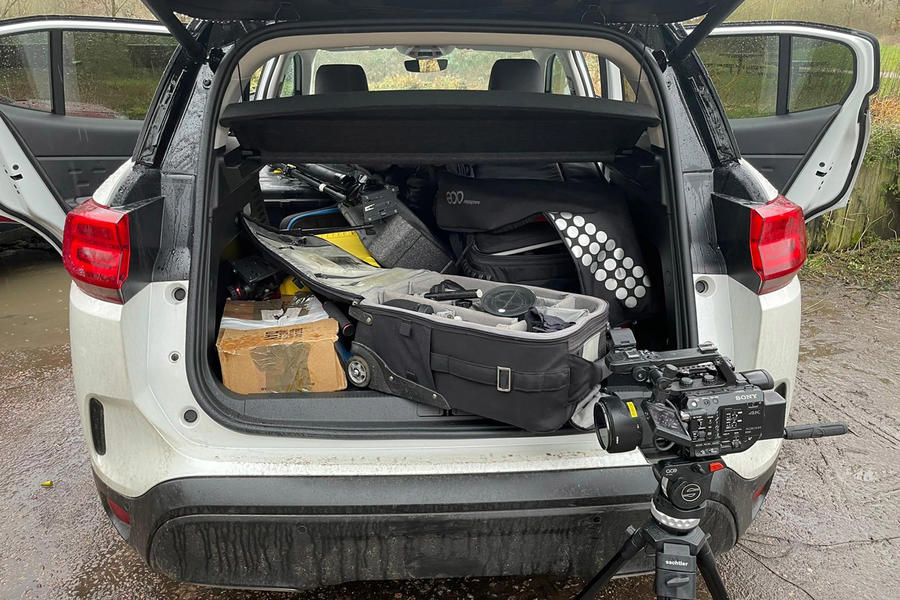 Running this plug-in Citroën over the past few months has been an interesting experience, even if a renewed lockdown has limited my time behind the wheel.

That’s not to say it’s been sat idle this whole time. On the occasions that I have, you know, actually driven it, the car has definitely had its moments.

With a soft ride and occasionally spongy-feeling controls – the brake pedal is particularly cake-like – the C5 comes across as more of a bean bag on wheels than anything else, which makes it a comfy thing to point down a motorway. Bump absorption at low speeds is decent, too, but every so often it drops the ball. The suspension doesn’t like craters and potholes too much, and even more gently scarred, porous stretches of road will see the wheels drop out from underneath you with a thump.

The steering is also really light and devoid of feel. That makes it easy to operate at low speeds, but you won’t feel inspired to grab it by the scruff of the neck and throw it down your favourite B-road.

All of which is fine, I guess. I’m happy enough to mooch about, and this car is mostly pretty good at that. Run on battery power and you’ll find it’s both quiet and punchy enough to keep pace with urban traffic, and when the petrol engine does step in, it does so in a very discreet fashion.

That said, I do have one really rather big gripe with this car, and that’s the 13.2kWh battery’s paucity of electric range. I wrote in my introductory report that I’ve only been getting 16 or 17 miles from a full charge when I should – so the WLTP claim goes – be seeing closer to 30 miles. Obviously the cold weather won’t be helping here, but I was recording that sub-claimed range long before the recent cold snap, and it didn’t exactly improve with that.

With no access to a home charger at my rented flat, I’m currently paying about £8 to top the battery up, which, frankly, is terrible value for the pitiful range I’ve been seeing. I could spend £5 on petrol and go further in a Lamborghini Aventador SVJ. 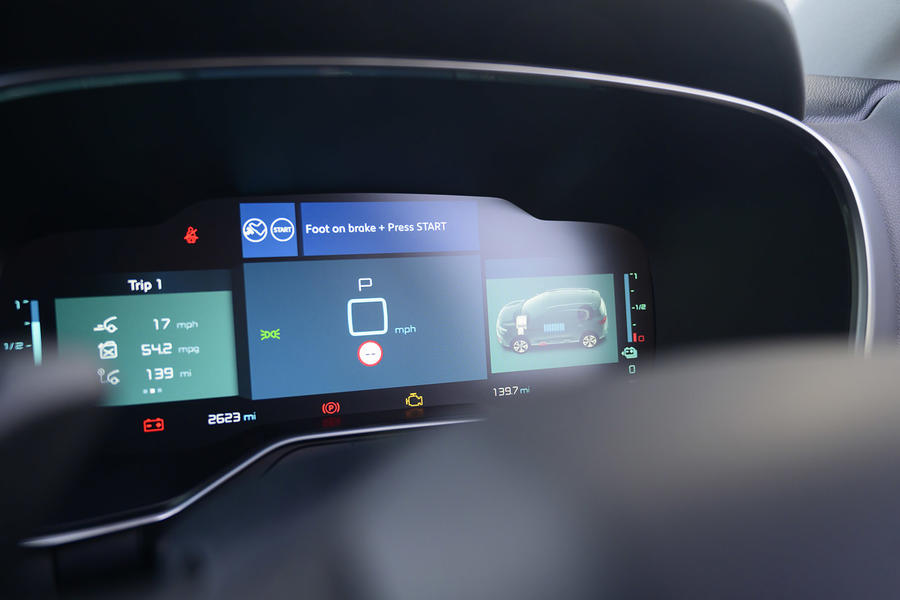 Of course, you could argue that a plug-in hybrid simply doesn’t suit my current living situation, and I would agree with you. If you don’t have access to off-street parking and a government-subsidised home-charging wallbox that can feed cheap electricity back into its battery, then you should steer clear.

But what about those company car buyers who might be in a similar living situation to me, but have bought a PHEV simply to slash their benefit-in-kind obligations? The savings would mean someone in the 40% tax bracket could potentially make up the approximately £5500 list-price difference between this car and a range-topping petrol in about two years, so those people must exist.

Somehow, I can’t see them bothering to seek out a public-access point before paying a premium to top their batteries up, all so they can keep their green credentials intact.

So that’s my main beef with this car, although it’s a moan that could apply to any PHEV. Otherwise, I quite like it. I just hope I’ll start seeing a bit more range as the weather warms up.

Welcoming vibe Relaxing, chilled-out sense of dynamic character makes this a largely comfortable car in which to spend time.

Electric range Cold weather nukes the electric range. Pricey to top up at public chargers in urban environments where cars like this should appeal.

I got caught out the first time I tried to charge up the C5. The battery symbol is positioned on the right- hand side of the digital instrument screen, but the arrow that indicates where the charge port actually is on the car points left. I parked up, started a charge session, then realised the car was facing the wrong way and the cable wouldn’t reach.

It might seem weird that a Citroën C5 Aircross is joining the Autocar long- term fleet roughly two years after the car was launched, but there’s logic here, I promise.

You see, this chunky, funky family SUV was originally available only with a selection of oh-so-very-20th- century three- and four-cylinder petrol engines, plus a couple of four-pot diesels. We road tested the range-topping oil-burner at the time and liked its snazzy interior and laid-back, cruisy demeanour enough to award it three and a half stars.

This one, however, is the new plug-in hybrid version, which arrived in the UK last summer.

It’s effectively Citroën’s first proper step towards electrification (not countingthelikesofthesmall-batch AX Electrique and C-Zero from way back when), and it arrives in the context of a far larger and more serious shift towards battery power across the wider PSA Group and the car industry as a whole.

This is our chance to find out just how versatile this new C5 Aircross is compared with a conventionally powered SUV and discover exactly what the real-world benefits of running a PHEV actually are – past the obvious company car tax breaks that primarily drive people into cars like this, of course. It should give us plenty of opportunity to ponder the wider question of electrification, too.

But first, some details. KP70 VSX arrives in the poshest Flair Plus specification, with a list price of £36,845 before options. That makes it nearly £5500 more than the top-rung diesel and over £6000 more than the flagship petrol. Private buyers who won’tgainfromits10%benefit-in- kind rating might already think that looks like questionable value. 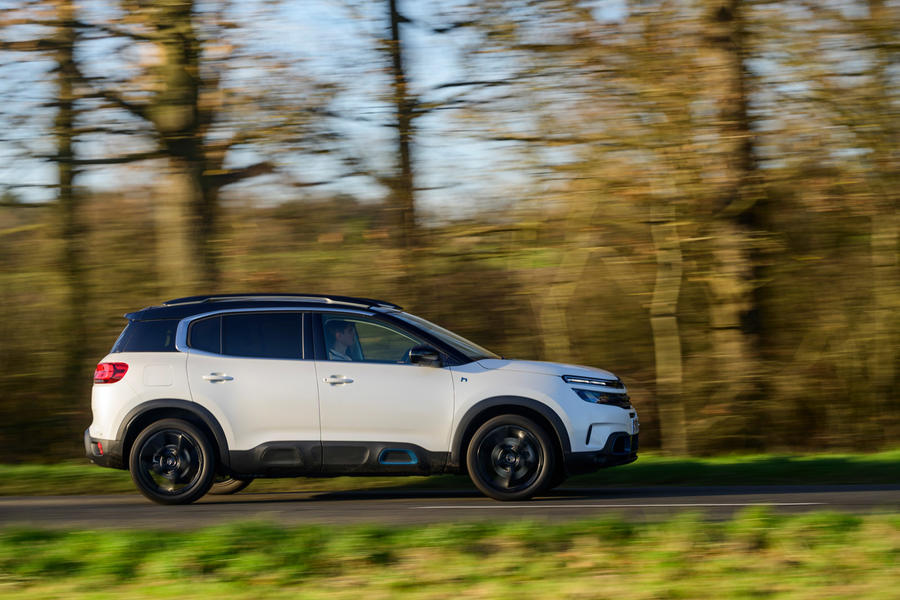 However, standard equipment is decent enough, given that lofty price. There’s a fully loaded infotainment system (with Apple CarPlay, thank heavens), 19in alloys, part-leather upholstery, wireless phone charging, dual-zone climate control and an arsenal of active safety systems, among other things. There aren’t any heated seats, though, so my other half is already saying she doesn’t like the C5 Aircross. But in her book, heated seats are the only difference between a good car and a bad one, so I’m not too worried by her initial verdict.

And for what it’s worth, you can get them – along with nappa leather upholstery – as a £1770 option. Speaking of options, our car doesn’t have many. There’s Pearl White pearlescent paint (£720) and a Black Exterior Pack (£300), which gets those alloys, the roof and the wing mirror housings painted, well, black. That’s it. I think it looks pretty neat.

Beneath the quirky but rather charming exterior is the same EMP2 platform that underpins everything from the DS 7 Crossback to the Vauxhall Vivaro. Its suspension is, on the face of it, pretty conventional, with MacPherson struts up front and a multi-link arrangement at the rear. Slightly less conventional are the so-called Progressive Hydraulic Cushions – a pair of hydraulic bump stops fitted to each strut that supposedly mitigate the effect of rebound and allow for a softer suspension tune. We’ll evaluate how effective they are in due course.

The powertrain, meanwhile, is shared with the Peugeot 508 Hybrid. It features a 1.6-litre, 178bhp four- cylinder turbo petrol engine and a 107bhp electric motor that’s housed within the eight-speed gearbox, which combine to endow the big Citroën with a system output of 222bhp. Of greater significance, however, is the lithium ion drive battery because, you know, that’s effectively what lends this model its attractive on-paper eco credentials.

It has a 13.2kWh gross capacity and provides a claimed range of between 33 and 40 miles, according to WLTP test procedures. Plug it into a 7kW charger and it will be topped up in less than two hours. It results in the promise of fantastical fuel consumption figures, too: officially, you can expect as much as 222.3mpg, but you’re likely to see Covid-19 completely disappear before hitting those sorts of heady heights.

While my west London flat does have off-street parking, I don’t have access to a home-charging wallbox. And because I rent, I won’t be forking out to install one, either. There are, however, two lamp-post chargers on my road and another couple of public chargers within a five-minute walk, so I should be able to plug the car in pretty easily and reliably.

What will be interesting to discover over the course of this long- term test, however, is whether or not the fuel savings that come from being able to run around on electricity will be worth the cost of plugging in. I’m not entirely sure they will be. 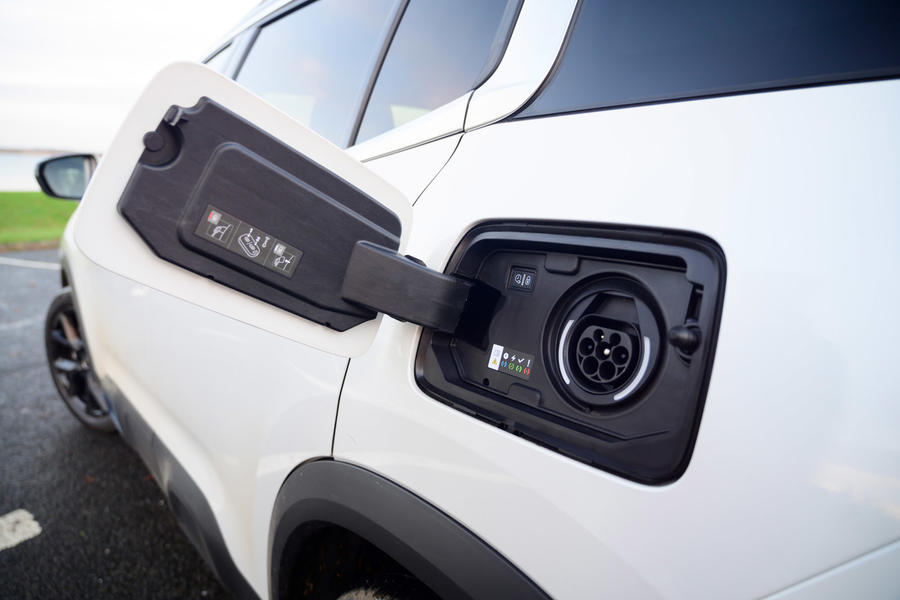 I’ve yet to actually use the engine. And on the very short trip I have done since taking possession, the car informed me that a full battery was worth about 16 miles of range – less than half the official figure. I’m putting this down to the winter weather for now, but this will need to drastically improve if the car is to stand a chance of proving its value.

We will see, but I reckon this is shaping up to be a fascinating experiment in the financial viability of running a plug-in car and charging it almost exclusively at public-access points. I’ll be sure to report back on my progress over the coming months.

All those ovals and lozenges make the C5’s cabin look a tad gimmicky, but I’d rather that than the chintz of the DS 7. A bit more differentiation for the PHEV wouldn’t go amiss, but it’s plush, quirky and, in EV mode, quiet enough to evoke big Citroëns of old. I would have liked a bit more DS-esque floatiness, though. 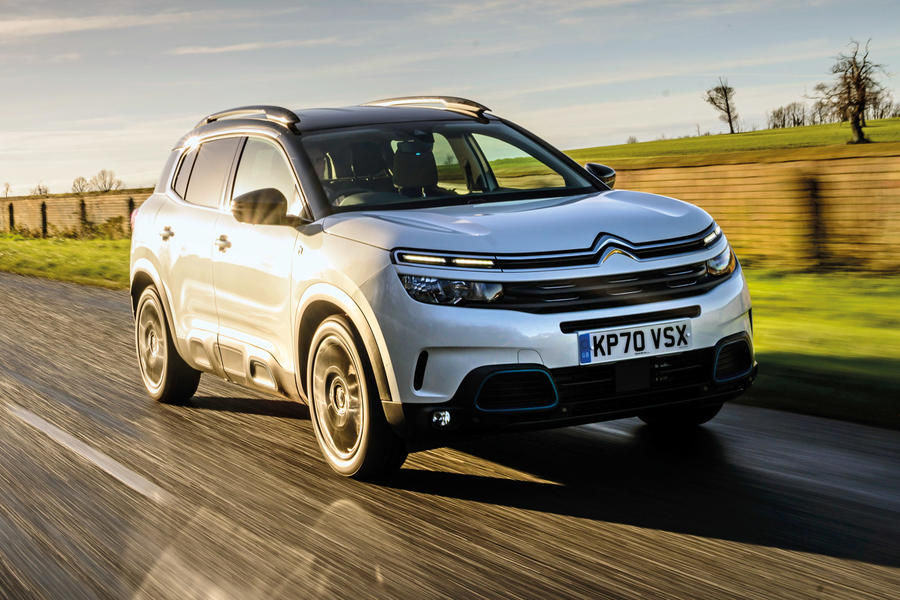 Log in or register to post comments
The Apprentice 19 March 2021
The REALLY useful test is if you could run it week without charging and report the average economy. For company drivers on AFR reimbursement its all that matters not battery range. If it can't do 45mpg on petrol alone its a non starter as the driver will lose money every mile.
xxxx 18 March 2021

Another phev let down, less than 20 miles from a 13kwh battery is horrifically inefficient. Even tax dodgers would struggle to make a case for it as to the private buyer, no chance.