In a world where it seems like performance SUVs are becoming increasingly flashier, ostentatious and — in some cases — downright vulgar, the new BMW X3 M40i arrives as a refreshingly restrained, flies-under-the-radar take on what a fast 4x4 can be.

You won’t find any massively flared wheel arches, ridiculous spoilers or unnecessarily large air intakes here. In fact, if it weren’t for two fairly large exhaust outlets and some rather prominent M40i badging on the tailgate, you could almost mistake it for any other X3.

That all seems to be an integral part of the appeal of BMW’s M Performance line-up, though.

These are cars that get a healthy serving of M performance, but don’t shout about it quite so much. And in the X3 M40i, that performance comes courtesy of a 3.0-litre, twin-turbocharged inline six engine.

It’s from BMW’s B58 family of motors — variations of which appear in cars such as the M240i and 440i — and, in this application, develops a healthy 355bhp at 5500rpm and 369lb ft from 1520rpm, sent to all four wheels via an eight-speed automatic transmission. From a standstill, BMW claims the X3 M40i will hit 62mph in 4.8sec and carry on to an electronically limited top speed of 155mph.

In addition to a more potent powerplant, the hot X3 also gains lowered M Sport suspension comprising MacPherson struts at the front and a multi-link arrangement at the rear, which has been calibrated specifically for the M40i, along with adaptive dampers and M Performance-specific variable ratio steering. Beefier M Sport brakes are also included to improve stopping power. 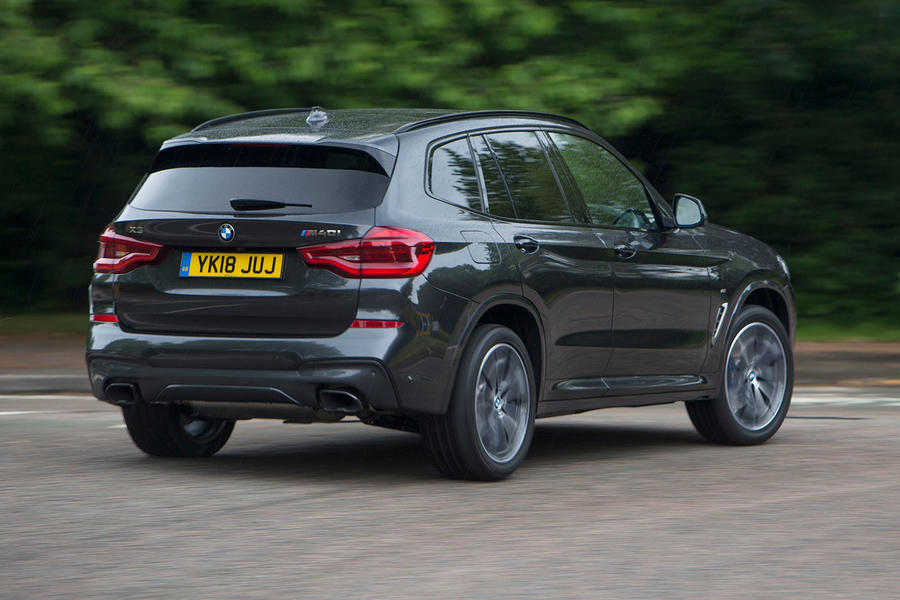 Step into the M40i’s cabin and, aside from a the occasional ‘M’ badge, the interior feels and looks largely the same as that of any other X3. That’s certainly no bad thing.

There’s plenty of adjustability in both the steering column and the seats, which are not only comfortable and nicely supportive, but also look particularly snazzy in our test car’s red leather upholstery.

The dashtop is crowned by BMW’s excellent 10.3in touchscreen infotainment system, which offers crisp, fluid graphics and gesture control. In the back, there’s plenty of head and leg room on offer. It’s an attractive, well-made cabin; not particularly different from, say, that of a 5 Series saloon, but that’s not really going to be a huge issue, is it?

Anyway, hit the starter button and the six-cylinder engine fires into the life with a muted bark that’s not particularly raucous but aggressive enough to let you know that you’re at the wheel of something with a fair amount of poke.

It’s a minor disappointment, then, that when you find a clear stretch of road and bury your foot, the manner in which the X3 M40i’s fairly immense performance is delivered isn’t particularly exciting.

Sure, if you exercise all of the throttle pedal’s travel, you’ll be greeted with a surge of smooth, linear and — unsurprisingly — rapid acceleration.

It’s just that the soundtrack that accompanies this increase in pace, while crisp and muscular, isn’t what you’d call memorable. And while you can position the front seats pretty low down, you’re still aware of the fact that you’re in a fairly high-riding SUV.

Thankfully, though, there’s a remedy. Select Sport mode and a flap in the M Sport exhaust system opens, lending the car a far more vocal demeanour with plenty of rifle-crack pops and bangs on the overrun. Throttle response is also sharpened, while the eight-speed transmission is far more eager to kick down and will hold onto its selected ratios for longer under throttle.

The X3’s adaptive dampers are firmed up, too, while the already fairly hefty steering becomes even weightier. The result is an SUV that doesn’t feel averse to being thrown into tight, fast bends.

There’s plenty of grip on offer here, with the front end only beginning to hint it’s about to wash out into understeer if you’re particularly silly about your cornering speeds. The steering is relatively communicative, although you do get the sense that it would be even more talkative were it not for the overly thick wheel rim. Body roll is present but, given this is a high-sided SUV, the way in which it is contained is impressive.

Tone everything down again and the X3 M40i returns to being a comfortable and refined cruiser. Despite the presence of the firmer M Sport suspension, the ride never feels too harsh or unforgiving and doesn’t fall apart at low speeds, either. Vertical body travel is also contained tidily over undulations.

Our only complaint — and it’s a small one — is that the 20in alloy wheels do generate a noticeable amount of road road when travelling at speed. 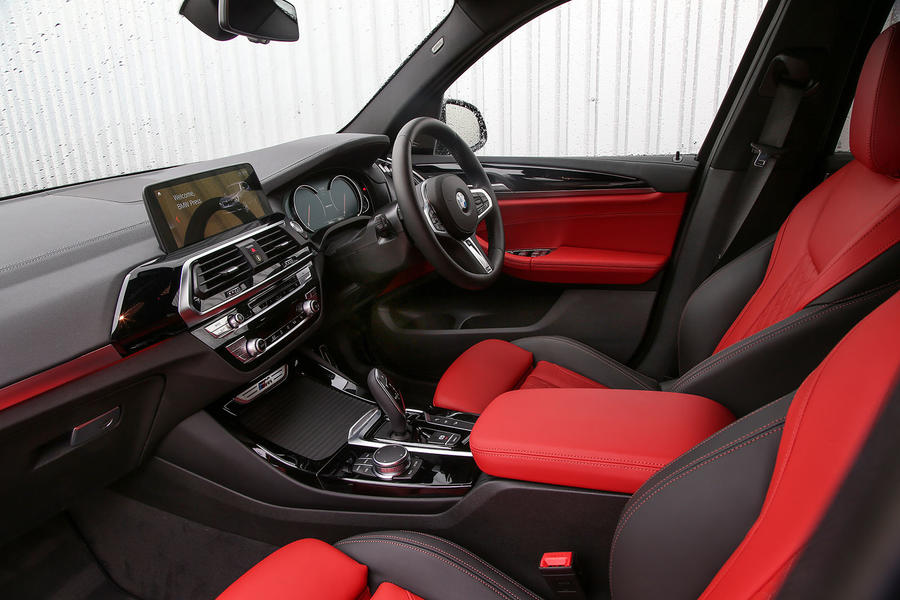 Being a range-topping, performance-oriented version of the X3, the M40i obviously comes with a heftier price tag; £51,705, to be precise.

That makes it a rival for the likes of the Mercedes-AMG GLC 43, as well as the Porsche Macan S.

While the GLC is arguably suited more towards those after a more extroverted performance SUV, and the Macan certainly the sharper driving tool of the three, the X3 M40i is by no means far off the mark. And, for that reason, it warrants consideration. 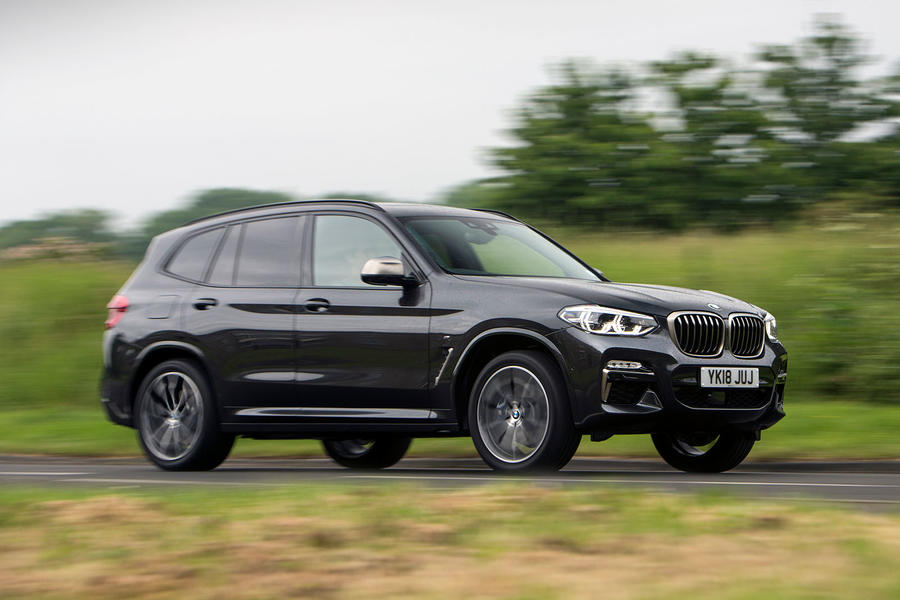 A couple of years ago, I'd probably have ordered one of these as soon as they were announced. Now, I just look at it and go, "Meh…", whilst configuring the i-Pace. BMW have fallen so far behind in building a presence in BEVs that, despite their frantic spinning, they're an industry joke.

A couple of years ago, I'd probably have ordered one of these as soon as they were announced.

I’m lucky enough to own one of these, which I ordered as soon as it was announced. 3 months in and I did not make a bad decision - it’s a belter to live with. As someone who lives in central London an EV would be ideal, except that I have nowhere to charge it as I live in a flat with no charging points nearby.  Infrastructure fail!  The iPace, although apparently lovely, is also considerably more expensive. I specc’d one and without going mad got to £78k.

He is only mentioning the iPace because it is (concieved to be) British.