From £152,8659
The DB11 Volante is the first convertible variant of Aston Martin's new model generation. How does it compare to the likes of the new Ferrari Portofino?
Open gallery
Close

And it was pretty good when it landed. Really good, in fact. Still, ever since that first introduction of it, in the DB11 V12 coupé, Aston’s engineers have been tweaking and amending it – you’ll read about what they’ve done for the Vantage soon enough – and they’ve learned a thing or two along the way.

Here they’ve learned how to attach a soft-top to it, rather handsomely, I’d say. The key is getting enough layers in it to insulate, but not so many that it’s heavily pronounced. They’re proud of how little space it takes up behind the rear seats, and how much room it still leaves in the boot. There’s a sliding divider in there, but with the roof up, and the divider out of the way, there’s 206 litres of boot space, 20% more than in a DB9 Volante.

Other numbers? Despite stiffening in the sills, by increasing the metal’s wall thickness, 45%-more-rigid bushes in the isolated rear subframe and redesigning what they colloquially call the ‘garden gate’ – a cross-member that runs across the car ahead of the engine and locates to the cast suspension mounts – the chassis’ torsional rigidity has fallen from 34kN/deg on the coupé to 22kN/deg here.

That, though, is considerably more than the 14.7kN/deg of the DB9 Volante, and anything over 20kN/deg gives engineers something fairly rigid to work with. It adds a bit to the weight of this V8-only model, mind; 110kg over the DB11 V8 coupé, leaving it the same weight as the V12 coupé. The hood operates, quietly, at up to 31mph. It adds £15k to the coupé’s price. 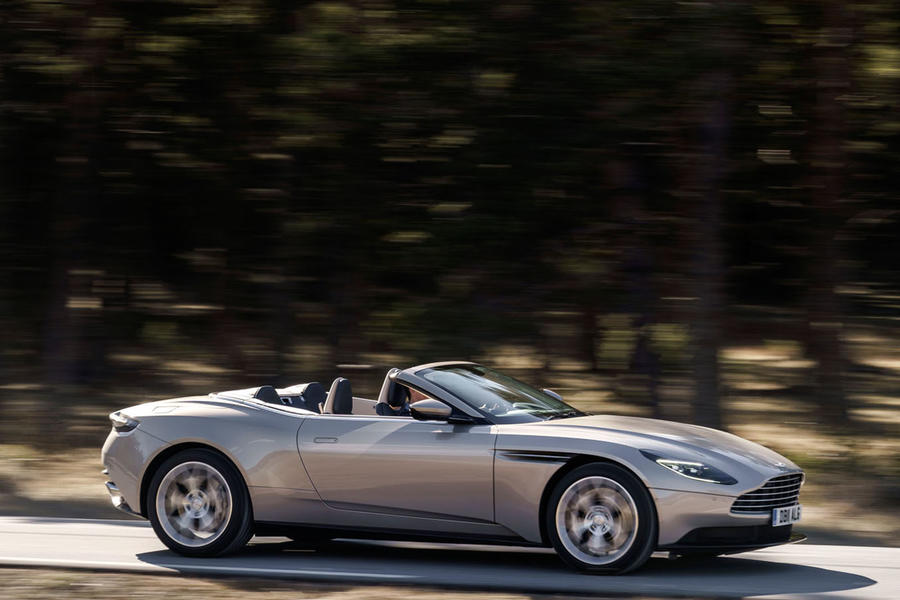 The engine, Mercedes-AMG’s 4.0-litre bi-turbo V8 with a 503bhp Aston tune, sits at the front as it does in the coupé, using the same exhaust so there’s no extra noise, driving the rear wheels through an eight-speed automatic gearbox.

There are tweaks to springs and dampers to compensate for the high, rearward application of weight – the distribution is a couple of per cent rearward, at 47/53 front to rear – but fundamentally the Volante retains a similar character to the coupé. I think it rides just as well, and has the benign, easy handling balance in crummy conditions that made the V8 coupé finish well up the order at our Britain’s Best Driver’s Car shootout last December.

If anything, I think it steers even better. In stiffening that ‘garden gate’, Aston has discovered a bit more about the underpinning platform and the extra strength has translated to improved steering response and feel. It’s still not as rich with messages as, say, Aston Martin the outgoing V12 Vantage S, but not much in motordom is. What it has done is lift the DB11’s rack closer to the top of the game for electrically assisted systems.

Further from the top of the game is the DB11’s interior. In isolation, it’s mostly fine – although the air vents don’t belong in a £160,000 car and the digital instrument display colours are a bit ZX Spectrum – but take a look at it after, say, the new Bentley Continental GT and you’ll see what you’re missing. 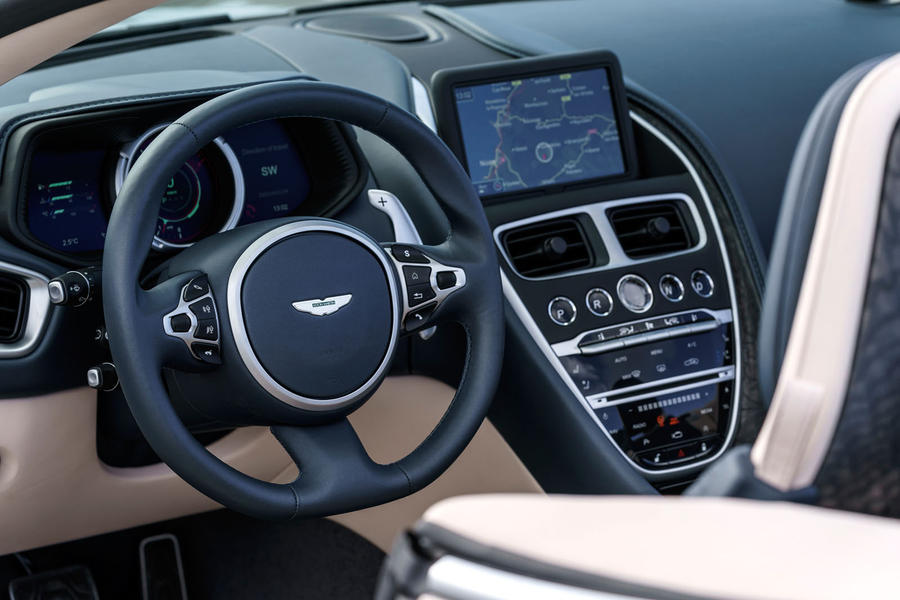 Bear in mind that as well as missing some Bentley-style luxuries, what the Aston is also missing is more than a third of a tonne of the Bentley’s kerb weight. The Aston, at 1870kg, still hovers around the sports end of the sports-GT market, then, which leaves it in a fairly unusual space: more expensive than Porsches, more GT-ish than junior supercars and more agile than four-wheel-drive machines. It’s space in the market it fills rather compellingly. 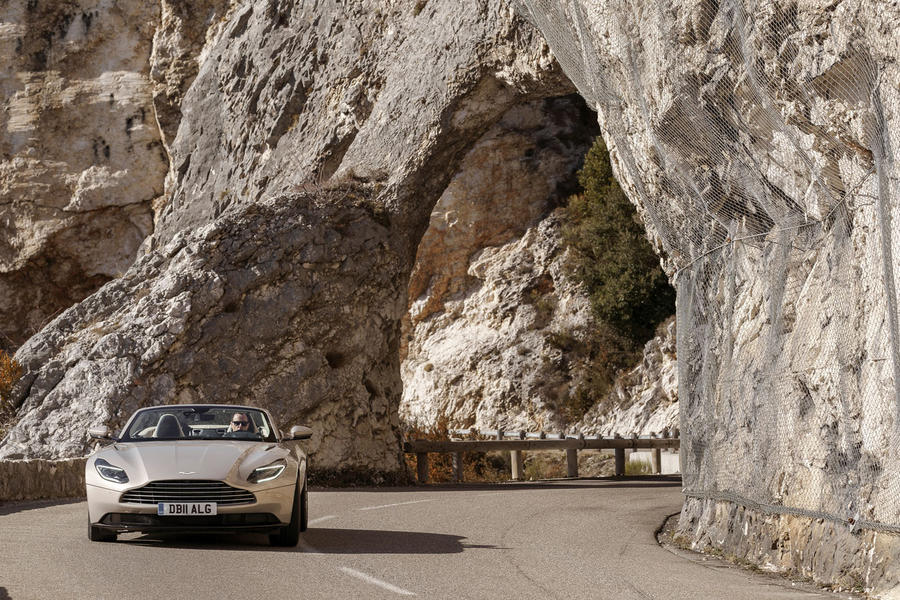 Portofino vs DB11 - Probably not direct competitors. Appeal to different clientele. The latter being a 'gentleman's express' - whatever it means - probably a British, or specifically AM, invention. Perhaps a gentleman's express dictates that the car must be wide and low. At least that seems to be AM's unchanging design brief for the past decades (after the early DBs). However accomplished the exterior design of the DB11 maybe, AM's visual language is forever tied to certain lifestyle statement.

"How does it compare to the likes of the new Ferrari Portofino?". It doesn't, at least in this article. Ferrari is way more powerful (almost 100 bhp) and lighter (more than 200 kg). It has a metal roof too. They cost more or less the same. But (only for Autocar, all other mags' reviews were different) the Ferrari gets 3,5 stars. It must be a really crappy car... or it's just a Ferrari, so let's have a go at them.

"How does it compare to the likes of the new Ferrari Portofino?". It doesn't, at least in this article. Ferrari is way more powerful (almost 100 bhp) and lighter (more than 200 kg). It has a metal roof too. They cost more or less the same. But (only for Autocar, all other mags' reviews were different) the Ferrari gets 3,5 stars. It must be a really crappy car... or it's just a Ferrari, so let's have a go at them.

Couldn't have said it better myself. Especially when the tough Stuart Sutcliffe - no Ferrari sycophant- gave it at least four stars.

A coupe version past me in a narrow road on my way home last week, first car for a long time which turned my head and made me think 'that is a beautiful car, I want'. Classy but not show off/shouty ala Ferrari, Bentley etc. Couldn't imagine a better way to cruise to the south of France than in this Volante. And its built in Britain!