A Mercedes SLK, with its folding hard-top, is a tempting buy. We tell you what to look for and how much to pay
Open gallery
Close

Galvanised Mercedes convertible: surely the recipe for a top used car, isn’t it?

One such example is a 2004-reg SLK 200 auto with 111,000 miles on the clock and a year’s MOT. “Engine powerful and reliable, hood works,” claims the seller. Doubtless were you to traipse to Leicester to check it out, you’d find much to criticise. Still, it highlights how low prices for the second-generation SLK go. Even at the other end of the spectrum, they aren’t mad, with late ’n’ low cars starting at £11,000 or about where the cheapest SLK 55s (not covered here) begin. In the middle, at around £7500, you’ll find decent-mileage facelifted 200s from 2008, and even some slightly older 280s and 350s.

The R171 may have followed its forebear in being a two-seat convertible-coupé with a folding metal roof but there the similarities end. Not only does the later model have a rust-resistant body but also far superior looks. It rides and handles better, too, although if those qualities are uppermost in your mind, try a 987-generation Porsche Boxster before pitching in. For the full-fat experience, go for the 350 or save your licence and buy a younger, lower-mileage 200. Because it arrived a touch later, there are fewer 280s to choose from and, in any case, they’re little cheaper than the 350.

Fast-forward to 2008 and the SLK received a facelift (new nose and tail) and some 650 new components, including a new instrument cluster. Power increased, with the SLK 200’s rising to 179bhp and the 350’s to 297bhp. The 280’s engine remained at 225bhp but became a tad cleaner and more economical. But Mercedes wasn’t finished with it yet. A year later, it renamed it the SLK 300; same power and economy but even cleaner. 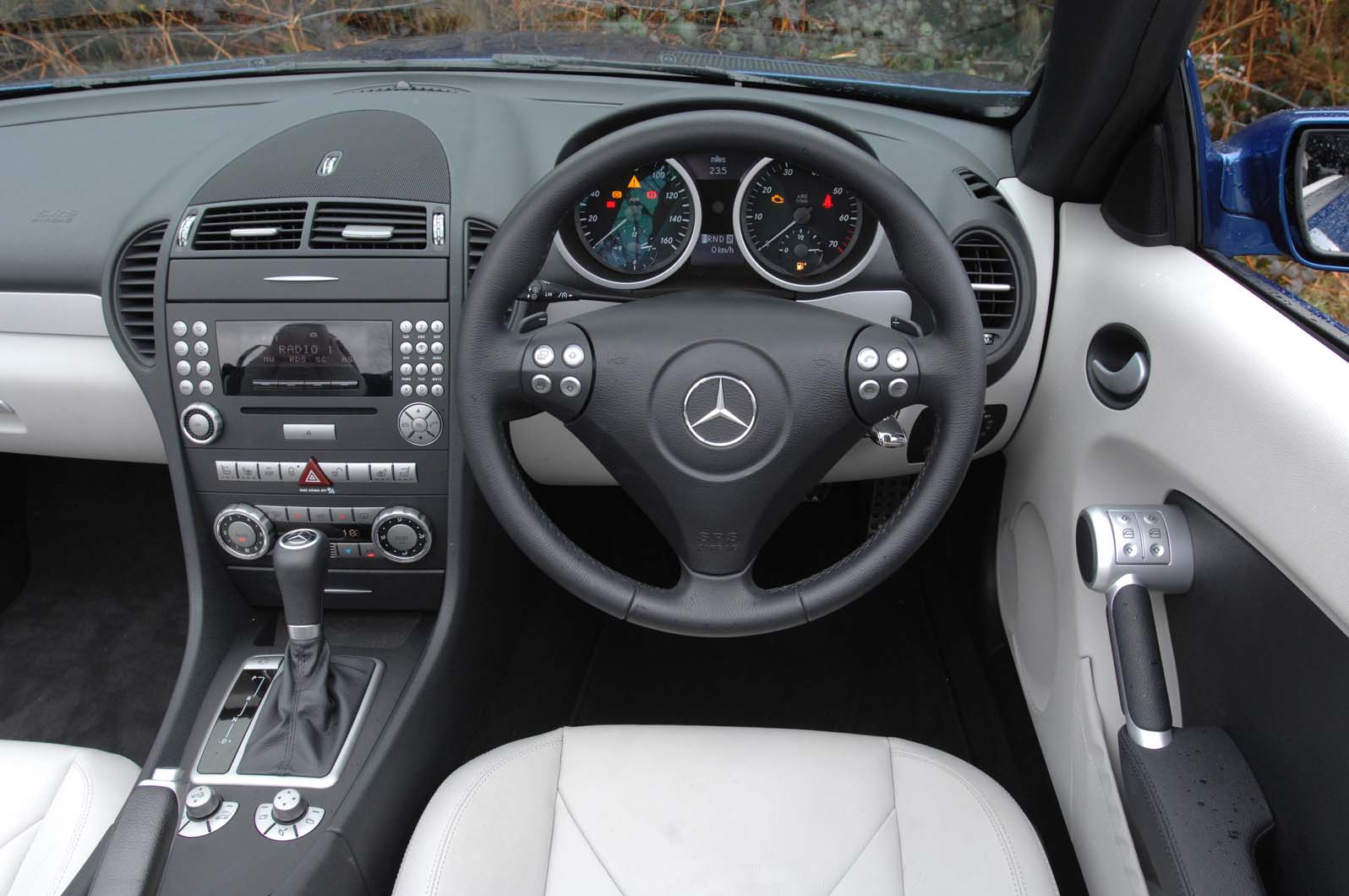 That same year (2009) saw the arrival of the SLK 2LOOK Edition with special finishes and details. It also got the SLK’s Airscarf neck-level heating system, an option on other versions and worth seeking out today. Other notable editions in the R171’s life are the higher-spec Sport on the 200 and 280, and Edition 10 (special paint and alloy wheels) on the 200, 280 and 350. As a last hurrah, the SLK 200 Grand Edition, complete with bonnet fins, landed in 2010 before the rug was pulled in 2011.

As autumn heaves into view and drivers’ thoughts turn to rain and fog, now could be the right time to buy a good used SLK R171 for an even better price.

“As a specialist technician, I give the SLK R171 seven out of 10 for reliability, drivability and looks. The engines aren’t as tough as those in the old R170 SLK. Neither is the 171’s seven-speed auto ’box on more expensive versions as trouble-free as the standard five-speed. Incidentally, whatever Mercedes says, those auto ’boxesdo like an oil and filter change every 35,000 miles. I can’t fault the 171’s galvanised body, superior suspension and sharper handling. On those measures, it’s a great car. ” 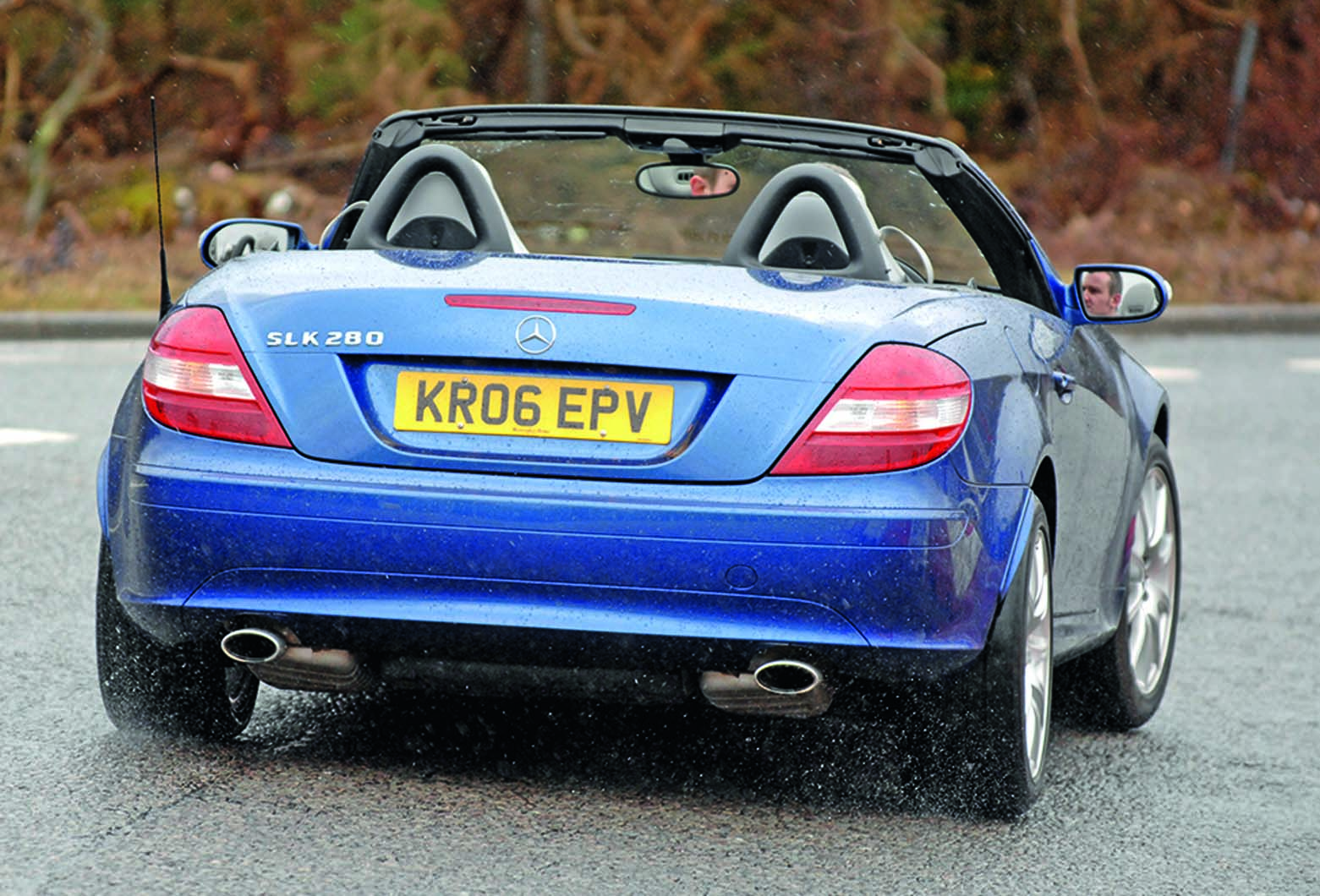 TRANSMISSION - With the car at a standstill, check for a smooth D-to-R engagement a few times. If the seven-speed auto’box won’t move beyond fifth, suspect speed sensor issues. On five- and seven-speed autos, low oil will cause overheating and clutchburn.

EXHAUST - Inspect the condition of the Y-section. Cracking is common but there’s now an inexpensive repair kit.

BODY - It’s galvanised so generally rust-free but rear subframes on older cars are now corroding, leading to possible MOT failure. Regarding the roof, lack of use can cause the dust covers on the microswitches to hold the switch in position so it can’t work. Headlights turn yellow with age (MOT advisory) but can be polished. Check there’s a modified seal on the A-pillar and around the windscreen to stop water penetrating to the door control modules and upsetting the central locking and windows. 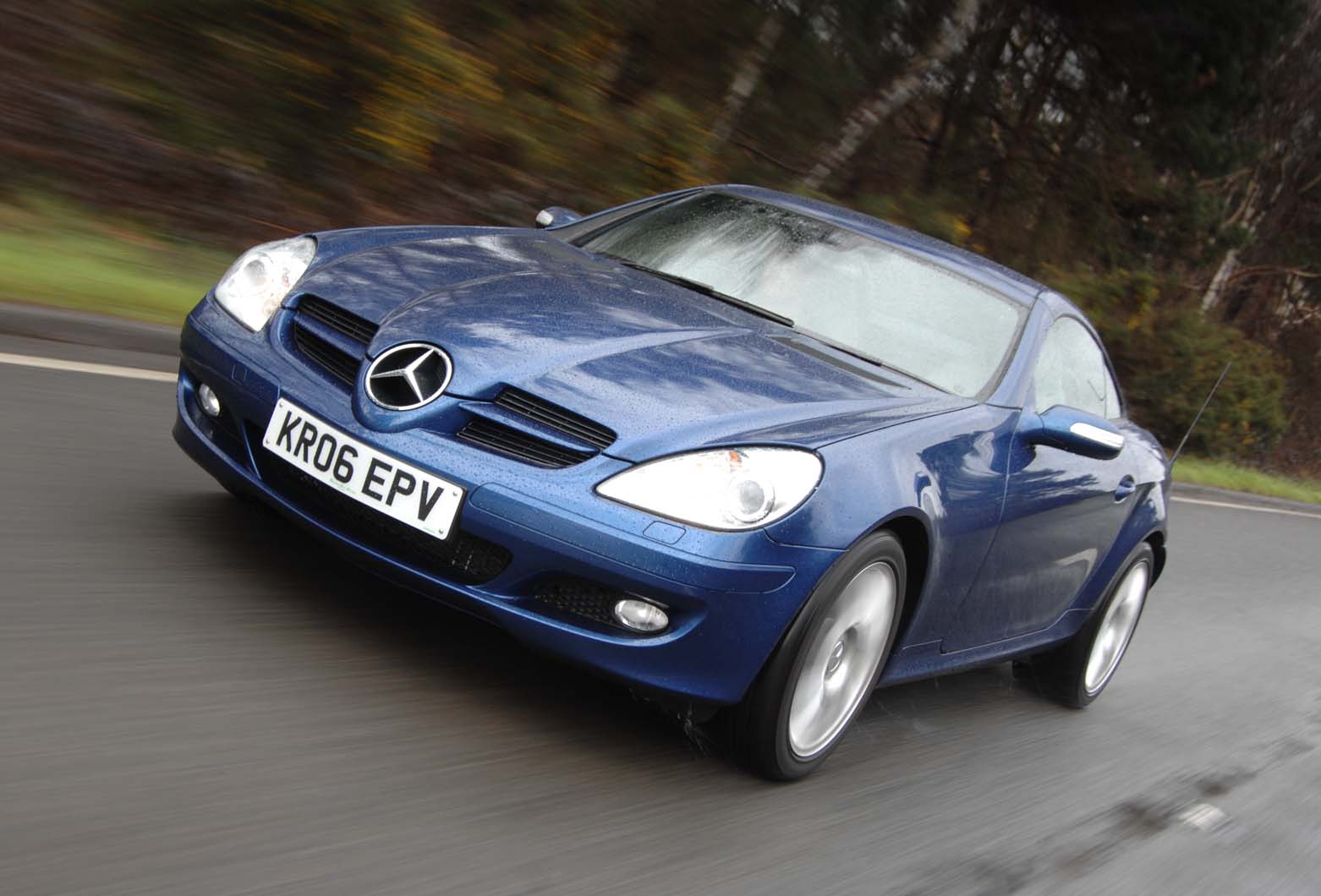 If the roof squeaks as it operates, check the seals. UV and age take their toll on the rubber, causing it to harden. Krytox, a synthetic grease, should return the seals to as-new condition. 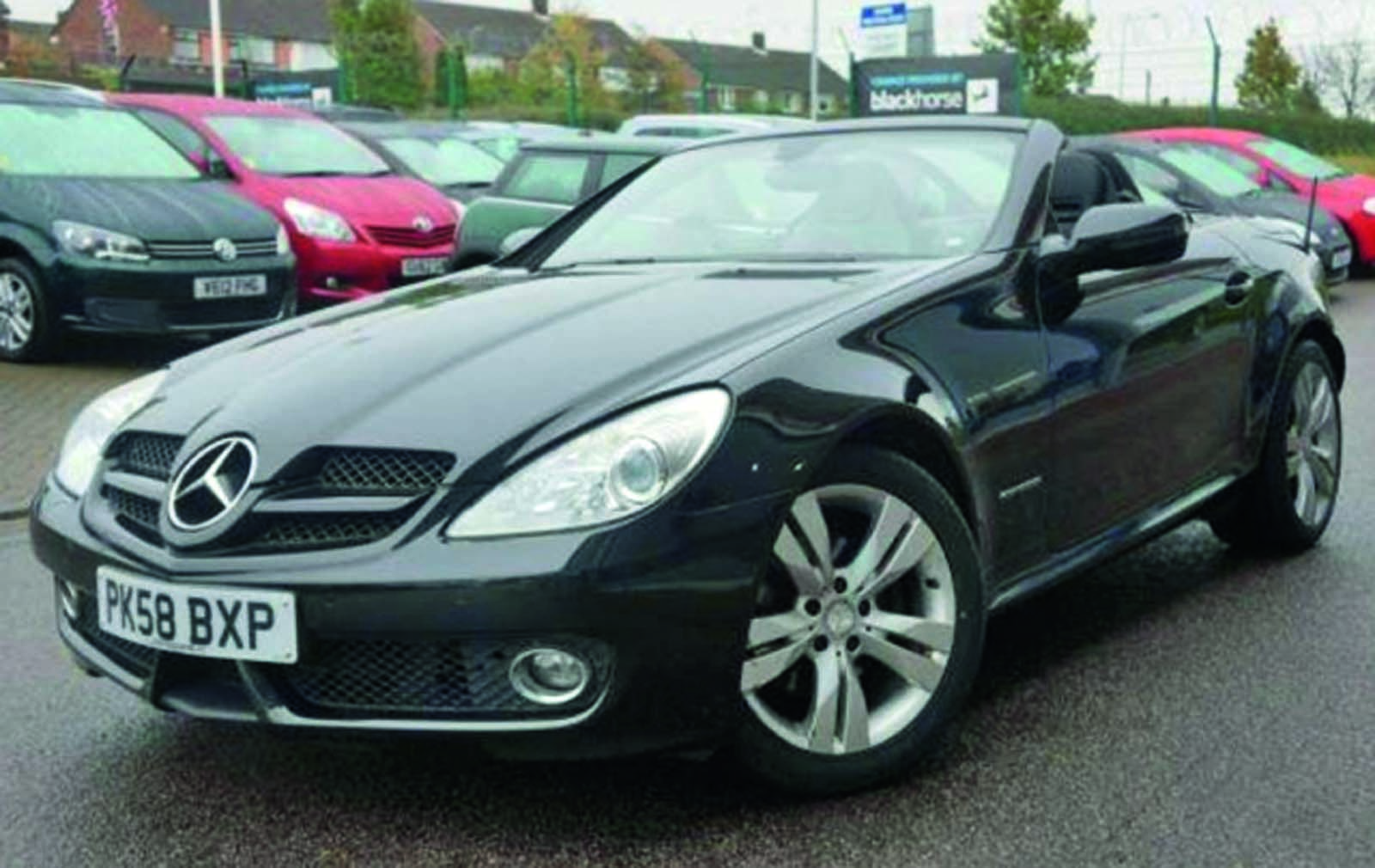 The glory days of the magnificently over-engineered Mercedes-Benz

A lot of people are still concerned about the perception of you by others based on the car you drive.

Many would assume that a man driving an SLK is either having a mid-life crisis or he works for EasyJet and is orange.

That being said, even at the ripe young age of 29 I've grown out of that mindset... a few months ago I was selling my partner's aunts Smart Roadster (she lives in rural Devon whereas I'm in Nottingham so more potential buyers in a 50 mile radius) and I drove it for a couple of weeks until it sold... I might've looked like a bit of a div but it was great fun to drive... blasting round the B-roads on a Sunday afternoon trip to the pub for some lunch I never stopped grinning.

Entirely subjective, of course, but for my money, the original R170 SLK was by far the cleanest and prettiest of the series, which has become progressively more ugly and overwrought with each iteration.  The R171's saggy tail and faux-F1 nose are particularly dissonant details.

The R170 was, of course, absolute rubbish, representing the nadir of Mercedes-Benz's late '90's cynical abandonment of quality engineering (and rustproofing).  I know this because, unfortunately,  I owned one.

And ran it for 4 years. Lovely car. Airscarf wasn't all it was cracked up to be, and over my time with it I had 3 driver's seat heaters fail (the base) of which 2 were replaced under warranty (I didn't bother with the last one - out of warranty ££££.
Nice exhaust sound with the top down, very good performance, good ride and reasonable handling.