BACK TO ALL NEWS
Currently reading: Used car buying guide: Porsche 944
UP NEXT
New 2023 Audi A4 Avant undergoes tests in the Alps

Porsche picked an unusual attack in 1982, but it scored big
Open gallery
Close

The 944 isn’t a traditional Porsche sports car. In fact, it’s a far cry from that iconic flat-six, rear-engined coupé you’re thinking of.

Little does that matter, however. In its heyday, this masterpiece was the most successful sports car in the manufacturer’s history, with more than 163,000 examples produced.

Introduced in 1982, the 944 built on the platform its 924 predecessor had established. It features a front-engined, rear-wheel-drive layout and a range of in-line fours. Initially offered with a 161bhp 2.5-litre unit under the bonnet, the standard car – called Lux – is no slouch, although it’s no rocket either.

The 217bhp Turbo offers more fiery performance, with a 0-60mph time of 5.9sec. It arrived in 1986. Next to be introduced was the S, with a 187bhp 2.5-litre atmo engine. And at the top of the performance ranks, you have the Turbo S. This 247bhp limited edition appeared in 1988 and today is the rarest and most sought-after 944.

Porsche, upon noticing this, then replaced the Turbo’s 217bhp engine with the 247bhp unit of the Turbo S. The updated Turbo got all the Turbo S enhancements bar the M030 suspension and Club Sport wheels.

Finally, just a few months before the 944 gave way to the 968, the Turbo Cabriolet landed in 1991. Buyers could choose between a standard five-speed manual gearbox or a three-speed automatic (most chose the former), and the 944’s rear-mounted transaxle (made by Audi) helped achieve a near-perfect weight balance. It therefore feels like a true driver’s car, possessing excellent balance and agility. 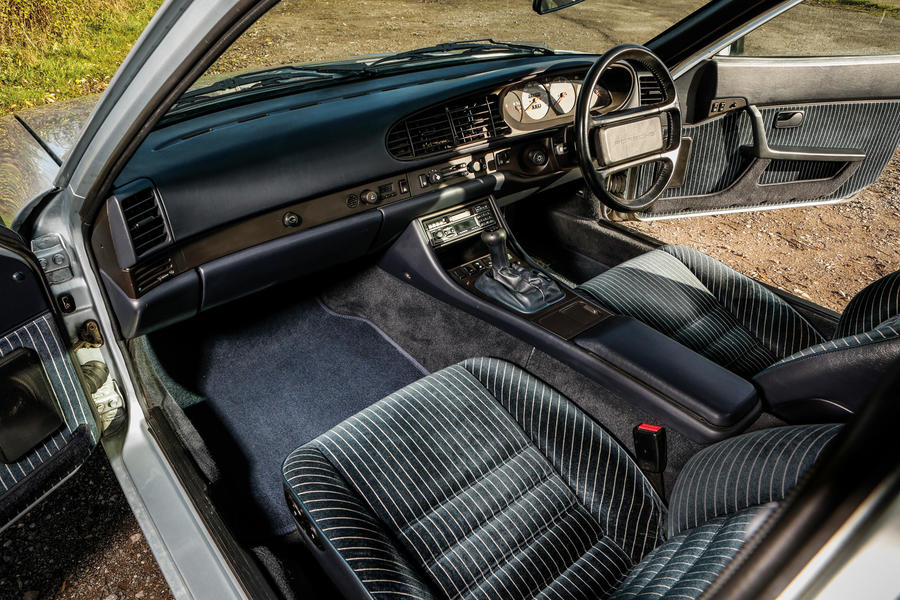 In pre-1988, non-Turbo form, it’s also around 200kg lighter than the current Porsche 718 Boxster, despite packing a couple of modestly sized rear seats. It’s remarkably fun to pilot through a set of winding corners, with accurate, suitably weighted steering and little body roll. In fact, it even makes a good track-day car.

Then again, the 944 can double up as a grand tourer, too, thanks to a comfortable ride, a well-appointed interior and a decent boot, as well as the previously mentioned rear seats.

Confidence-inspiring reliability acts as the cherry atop this delectable cake. Find a 944 that has been well looked after and properly maintained and it shouldn’t cause you an unprecedented number of problems. You could truly use it every day.

Although if you do, just remember that it’s an appreciating asset, and one that’s only getting rarer. Despite being one of the most accessible Porsche models right now, the best, most desirable cars – Turbo and Turbo S variants with low mileages – can often sell for more than £30,000. But even then, it remains a steal compared with rival classics.

29 May 1982: “Overriding all is the 944’s out-of-the-ordinary efficiency, handling and grip. It’s superbly finished and has a unique balance of qualities that for the price makes its few issues seem utterly insignificant.” 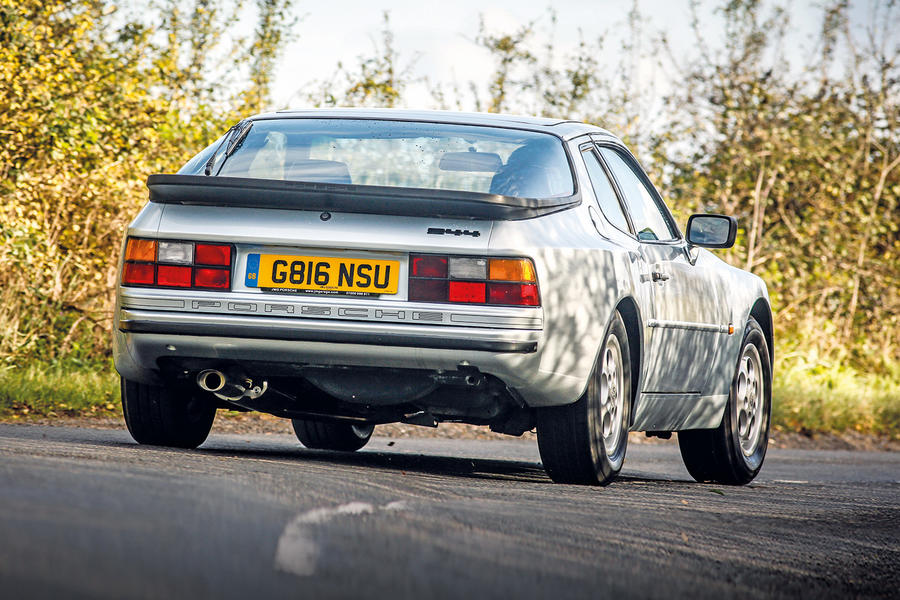 Danny Kayne, Revolution Porsche: “I’m a big fan of the 944. With the engine in the front and the gearbox in the rear, it has brilliant balance and is an amazing track car, if that floats your boat. There are pitfalls, though. You could buy one that has been partially restored by someone who hasn’t done it correctly, and within a year of ownership, corrosion starts to rear its head. It’s also important to check the timing belt, water pump and balanced belts. So whenever you buy one of these cars, definitely get a pre-purchase inspection before you hand your money over.” 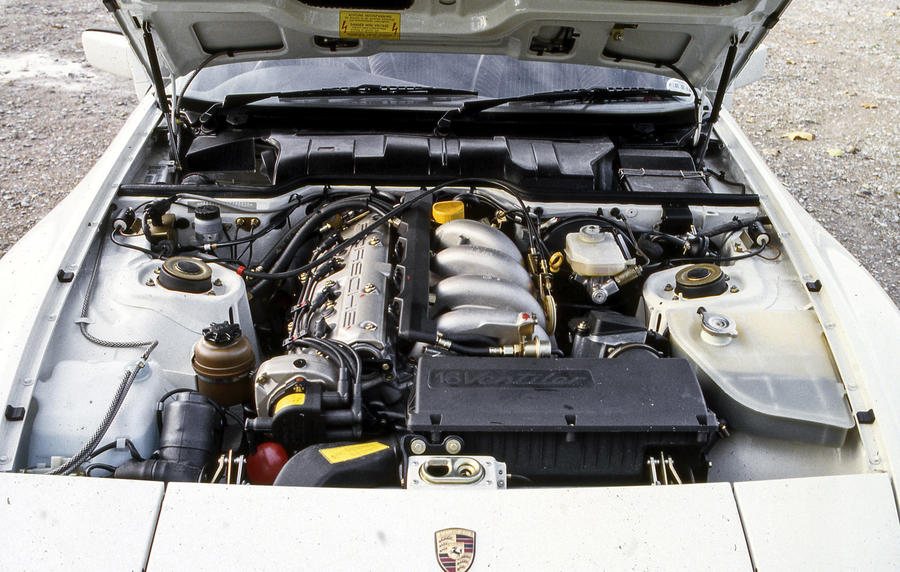 Engine: Check for oil changes at 6000 miles on pre-1986 cars and Turbos or at 12,000 miles on later cars. It needs the timing and balancer shaft belts replaced every 40,000 miles or three years and a new water pump every 80,000 miles. Check the exhaust cam-chain tensioner on the 2.7 S. Vibration at idle could be due to the engine mounting or clutch’s thrust bearing. Test the latter by resting your foot on the clutch: if it’s failing, the vibrations stop. Oil and water mixing suggests a failed head gasket or integrated oil cooler on all engines bar post-1989 Turbos. Smoke on start-up is due to worn valve stem seals; smoke in general running is due to the cylinder liners.

Wheels and tyres: Check for cracked alloy wheels and look out for perished tyres.

Interior: Ensure all the ancillary motors work, the headlining is secure and the fascia isn’t cracked.

Unlike the preceding 924’s engine, which was sourced from Audi, the 944’s 2.5-litre unit is pure Porsche. It’s in essence one half of the 928’s 5.0-litre V8, although very few of the parts are actually interchangeable. The in-line four configuration was chosen due to its size and efficiency; although two counter-rotating balance shafts were fitted to help the engine run more smoothly.

£5000–£6999: Mid to late 2.5-litre examples with mileages generally north of 100,000. Conditions aren’t all terrible; actually, there are some really respectable cars here.

£10,000–£15,999: Cabriolet versions of the S2 appear. Conditions are good but mileages generally remain high, then begin to waver around 100,000 towards the top end, where you will find examples in nearly showroom condition.

£16,000–£19,999: High-mileage Turbos in respectable condition appear and make up the majority of models here.

Porsche 944 2.5 lux, 1985, 92,000 miles, £13,500: This is perfect for those who want to spend just enough cash to get a really good 944. It has had some work done to “bring it back to its former glory”, including “significant mechanical investment”, and it looks stunning inside and out. It has also been resprayed in a classy metallic gold.

Log in or register to post comments
si73 3 May 2022
The 924 in S guise has the 944s 2.5l engine detuned to 150bhp instead of the 944s 160, and in the last editions it wasn't detuned, so is worth considering as well, as you get a slightly lighter and slimmer car with similar if not slightly better performance, and the slimmer body is all the better for narrow country lanes.