BACK TO ALL NEWS
Currently reading: Used car buying guide: Lamborghini Diablo
UP NEXT
2023 Polestar 4 will be affordable, mid-sized SUV-coupe

Lamborghini’s Diablo has many flaws, but they’ll all melt away if you drive it properly and extend its mighty V12
Share
Open gallery
Close
Share story

News of the reborn Lamborghini Countach prompts memories of the original’s successor, the Diablo. Launched in 1990, it was offered in coupé and roadster forms and powered by a 485bhp mid-mounted 5.7-litre V12. The top speed was 202mph and 0-62mph took 4.5sec, making it, at the time, the fastest car in the world. The Diablo is the archetypal Italian supercar: difficult to drive, impractical – and magnificent.

The example in question is a ‘basic’ 485bhp model. Between the Diablo’s launch and 1998, when Audi assumed ownership of Lamborghini, various versions of the model’s 5.7-litre V12 emerged, ranging in power from 485bhp in regular rear-wheel-drive and four-wheel-drive VT models, through 510bhp in rear-drive SV versions to 523bhp in rear-drive SE30 and 595bhp in SE30 Jota models. The SE30 was a street-legal racer launched in 1993 to celebrate Lamborghini’s 30th anniversary. The more powerful, track-only Jota variant was the fastest Diablo of all. 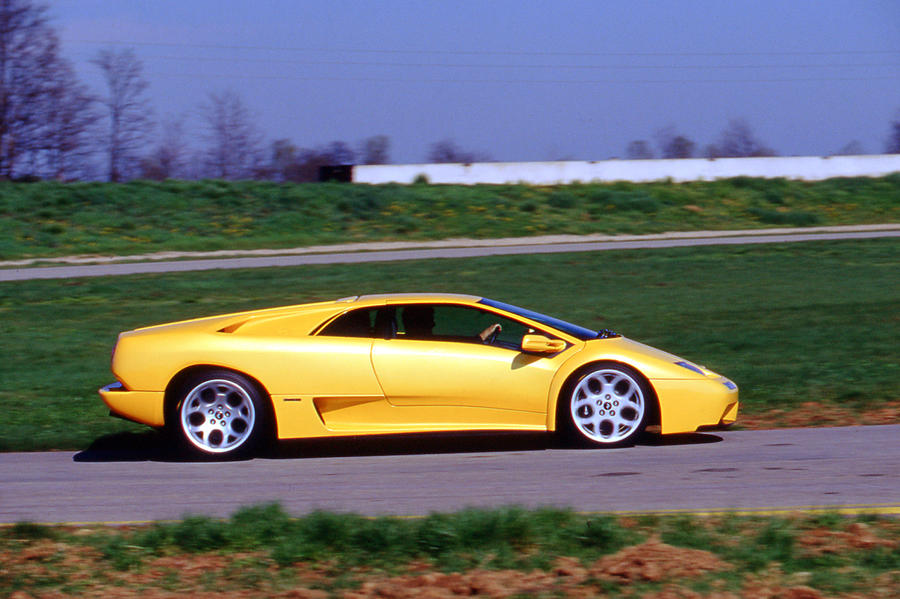 A facelift came in 1999. Key changes included fixed lenses in place of the earlier pop-up headlights and a redesigned dashboard with an integrated instrument display. At the same time, the 5.7-litre engine gained variable valve timing, sending the power of SV and VT models to 528bhp. Meanwhile, the SE30 and SE30 Jota models gave way to the track-focused Diablo GT, which was powered by a 6.0-litre V12 producing 575bhp. (A GTR variant had 590bhp.)

In 2000, Audi signed off an updated Diablo VT. Changes included a new nose with larger air intakes and a special design of 18in OZ alloy wheels. It was powered by a 550bhp version of the GT’s 6.0-litre engine and followed by the VT SE, a run-out model. 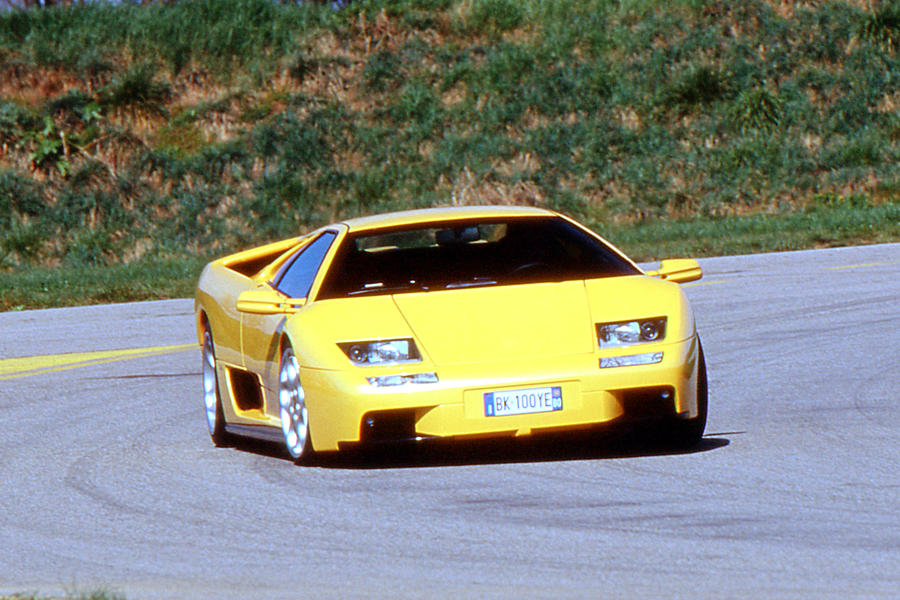 All Diablos have a five-speed manual gearbox. With the exception of the engine cover, bonnet, sills and bumpers, which are all carbonfibre, the body is aluminium mounted over a steel space-frame. Suspension is a wishbone, springs (double at the rear) and anti-roll bar set-up, while on VTs it’s a fully independent active system offering four suspension modes. This version also has power steering as well as four-wheel drive, a system that, in extremis, sends up to 25% of the engine’s torque to the front wheels. Many people prefer this model over the others for its easier driving manners. There’s also a super-rare VT Roadster, which feels as stiff as the coupé.

Our £125,000 bargain aside, Diablos with a solid provenance and service history, a modest mileage and in good condition start at around £150,000. It’s not a lot to pay for a slice of Italian V12 exotica and a lot less than that new Countach.

“Engineering-wise, the Diablo is a pile of… Well, you finish the sentence. For example, because it’s spring loaded, the accelerator pedal is heavy and tiring to use. On early cars, especially, the clutch is also heavy and very tiring to work. The Diablo is not easy to drive quickly – you’ll be eaten up by a modern hot hatch – and you’ll have trouble threading it through country lanes. However, it is great looking – a poster car that sounds like thunder. The four-wheel-drive VT is the best one – easier to drive thanks to its power steering and lighter clutch. It also feels much more secure and predictable. Look out for a facelift car, what those in the know call ‘big brakes, small dash’. They’re more sorted.” 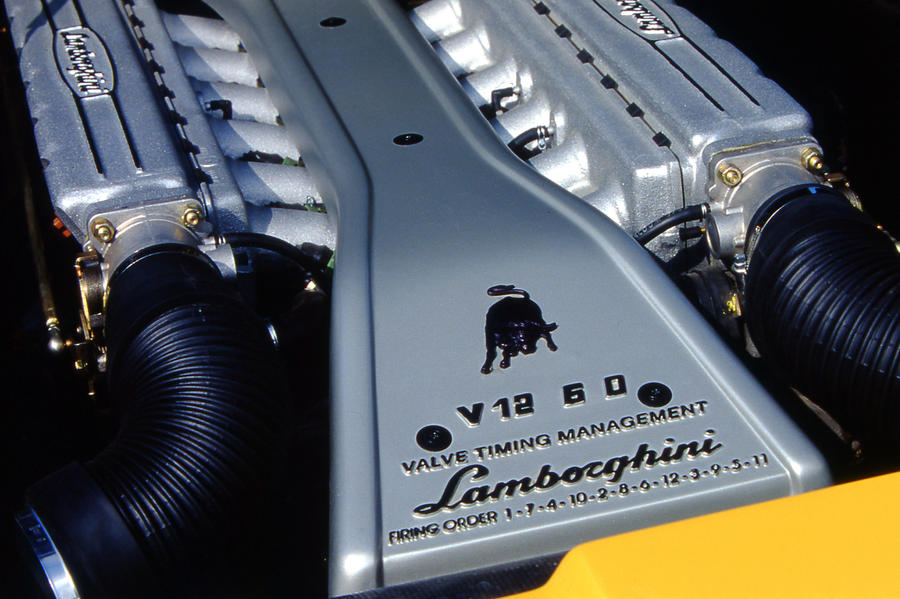 ■ Engine: Rev the engine, then listen for the cam chains rattling on the overrun, a sign they’ve stretched. Valve clearances require checking every 18,000 miles. It’s an expensive, engine-out job. Look for oil leaks between the engine block and sump caused by perished sealant. Check the condition of the radiators and that the cooling fans cut in at the right temperature. Later models with variable valve timing can get variator problems caused by degraded oil.

■ Transmission: Single-plate clutch lasts no more than 25,000 miles. Early cars use a pull-type rod to the slave cylinder, which breaks. The push-type rods on later cars are more reliable. The gearbox is fragile and the gearlever is prone to snapping where it enters the gate.

■ Steering, brakes and suspension: Early cars have very weak brakes. The wishbone bushes at the chassis end are likely to be perished and are expensive to replace. The rear dampers carry most of the weight and get very hot so expect them, too, to need replacing.

■ Interior: Check sills and switchgear for damage, often caused by people getting in and out. The leather trim is poor quality so expect it to be coming apart.

Early Diablos had hydraulic cam chain adjusters that became tighter until they broke one or both of the chains. From 1994, new Diablos had more reliable mechanical adjusters. These were also made available as a service item for earlier models and most cars should have them but be sure to check.

This car ticks all the important boxes, having a reasonably low mileage, great provenance and an excellent service history. It’s in top condition, too (it has been kept in a dehumidified garage), although a specialist inspection is advised because this is a private sale.

A trip down memory lane as the Lamborghini Diablo turns 30

Five used Lamborghinis that you might just be able to afford

Totally hopeless as a road car! Too big, apalling visibility - especially to reverse. Only way to do that is open the door and sit on the sill. Pretty good to race though. More or less unbreakable engine, so-so brakes. Supertrofeo was a fantastice series.