BACK TO ALL NEWS
Currently reading: Used car buying guide: Ferrari 458
UP NEXT
Is the N mightier than the Ford? Hyundai i20 N vs Fiesta ST

The 458 Italia and its siblings were among the last genuinely soulful supercars, so now is the time to swoop if you want some proper V8 goodness
Share
Open gallery
Close
Share story

When the Ferrari 458 Italia succeeded the F430, we said that it set a new standard for supercars and that it was arguably Maranello’s greatest achievement.

It’s certainly one for kids’ bedroom walls, and even now, more than a decade after the 458 was introduced, its mid-mounted 562bhp 4.5-litre atmo V8 is a tasty proposition for a second-hand toy – if you can afford it.

The Pininfarina-penned 458 was launched in 2010 with performance on a par with the hallowed F40, although it was touted as the ‘junior’ Ferrari of the time, being positioned just above the entry-level California at a somewhat meagre £175,000.

As is always the way, optional extras added substantially to the cost, with some cars commanding a premium of up to £40,000 for goodies including racing seats, Alcantara headlining and a carbonfibre steering wheel.

We’ve moved on slightly in terms of point-to-point pace since then, but the 458 remains stupendously fast in a real-world sense, capable of getting from 0-62mph in 3.3sec and mustering a top speed of 210mph.

It made use of Ferrari’s seamless seven-speed dual-clutch automatic gearbox, and the accessibility of its reserves set the car apart from rivals, with its redline at 9000rpm and 80% of its peak power available from just 3250rpm. 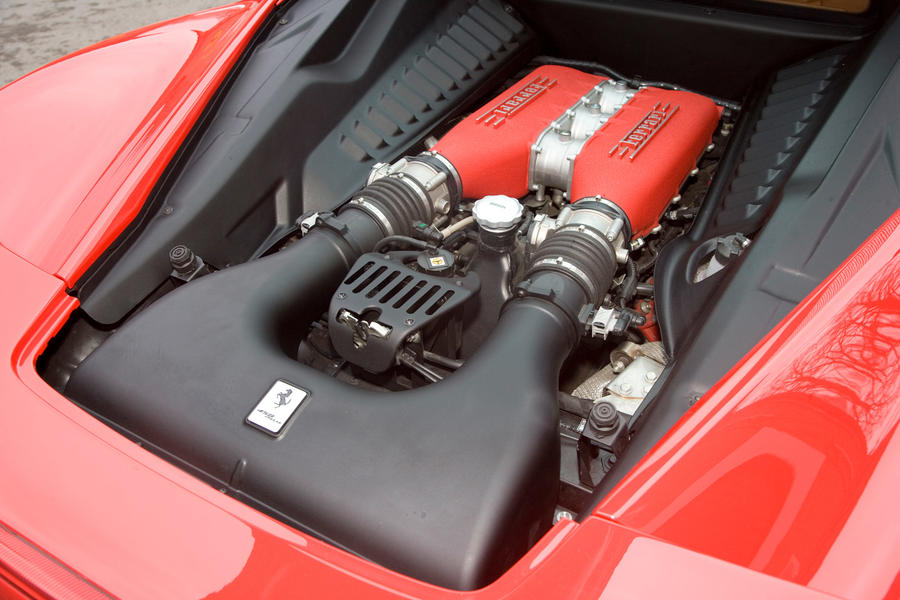 Such was the praise on the car’s release that customers who had managed to get their hands on a 458 were quickly attempting to flog them for £25,000 more than their original list price (and often succeeding).

In 2013, the exclusive 458 Speciale arrived, complete with coveted central racing stripe and, more excitingly, a power hike to 597bhp. Technological upgrades included a carbonfibre undertray, upgraded ceramic brakes, magnetic dampers, a new diffuser and uprated anti-roll bars. The Speciale was so hardcore that even its windows were made thinner, yet Ferrari’s Side Slip Angle Control (SSC) system gave it a level of accessibility for all drivers brave enough to get behind the wheel.

As you would expect from a supercar, most used examples of the 458 have relatively low mileage but will no doubt have been driven eagerly and potentially even on track. Colour combinations, mileage and the number of owners can contribute to reduced prices, which now start from around £115,000 – not pocket change, of course, but enticing for an old V8 Ferrari with new V12 Ferrari levels of performance.

The soft-top 458 Spider commands a premium for its open-air thrills, and many examples were crammed full of costly extras.

Prices for the Speciale are a different proposition altogether. Appreciation has been kind to the top-link 458, which starts at almost £30,000 more than its original price and climbs as high as £320,000. That’s about £100,000 more than you need for a new F8 Tributo – although it could well be a safer long-term bet. 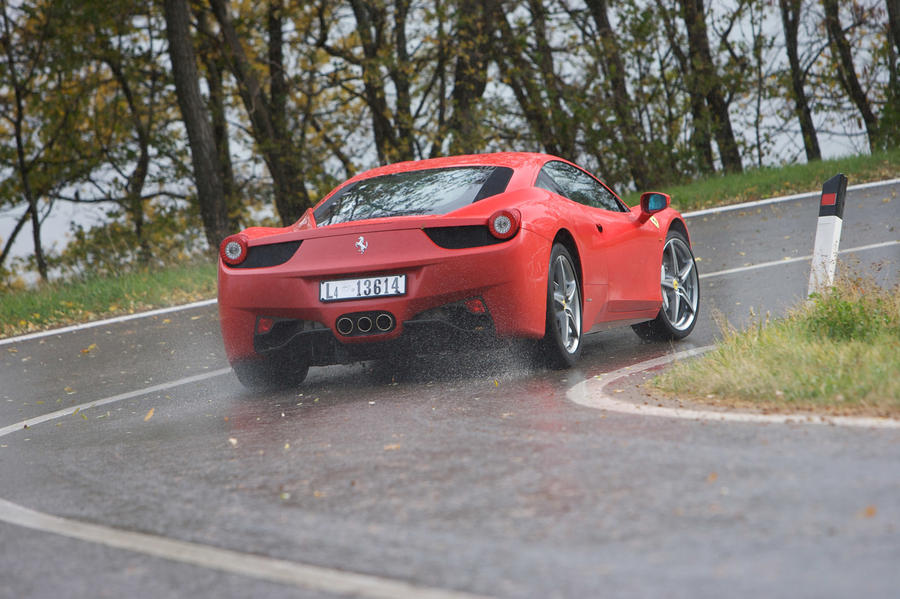 Jason Burtman: “I was driven to the 458 because it was the last Pininfarina-designed Ferrari at the time and had the last naturally aspirated Ferrari V8. It has soul that the 488 and F8 Tributo lost. People should look for specific options that they might want, since quite a lot of cars come stripped down with no extra features. I think the 488 will be worth less than a 458 in a few years, so if somebody wants one, they have a small window to get in at a better price before it starts to go up.”

■ Optional extras: Optional extras can push up the price of a used 458 to unfathomable levels, so take care to ensure any car you have your eye on has everything listed and look out for options yourself when examining it.

■ Transmission: Some 458 owners have reported transmission failures for models built between 2010 and 2011, with gears being ‘missed’ or damage to the speed sensor wiring. Although this isn’t a common issue, it has occurred most commonly between 6000 and 8000 miles.

■ Rear-wheel adhesive: In 2010, Ferrari recalled all 458 models – some 1200 cars – in light of a series of high-profile incidents in which five customers lost their cars after the adhesive in the inner arch-liner caught fire. The recall prompted new liners to be fitted at local dealers, so check that this has been completed. 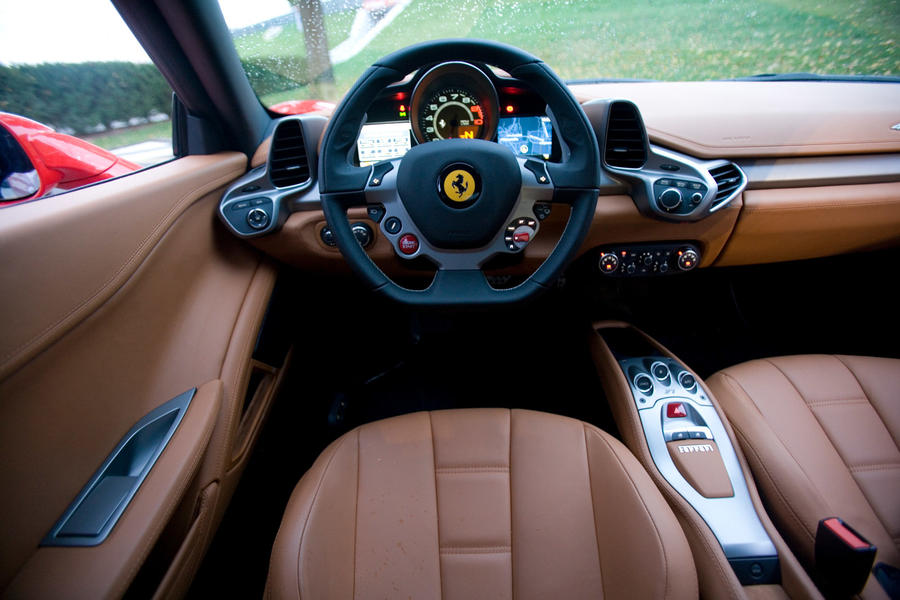 ■ Tyres: Check for tyre wear, especially at the rear, and find out if the 458 you are eyeing has been used previously on a track. If they’re worn, new tyres can cost around £300 each.

■ Spider's roof: There have been reports of owners having their Spider’s electrically operated roof jam when opening, and others have complained of water seeping through, so keep an eye out for any water damage or staining.

Every derivative of the Ferrari 458 carries an annual road tax figure of £600, due to its large engine and hefty CO2 output of 275g/km. You’re also likely to pay around £110 for each full tank of petrol – though if you can afford a 458 in the first place, hypermiling is unlikely to cross your mind.

£230,000 and above: Here’s where you’ll find the Speciale coupé. It’s a big jump, but this hardcore model arrived in such limited numbers that its desirability has only gone upwards. Towards the top of the scale (around £350,000) are those with fewer than 1000 miles on the clock.

Ferrari 458 Italia, 2012/62-reg, £119,990: This 2012 coupé is packed with £25,000 worth of options, including cruise control, a carbonfibre steering wheel and sat-nav, has a full service history and is listed at a reasonable price. There’s no exterior or interior damage to note, but it’s worth checking to see if the new arch-liners have been fitted for peace of mind.