BACK TO ALL NEWS
Currently reading: Nearly new buying guide: Skoda Scala
UP NEXT
Hidden gems: A peak behind the scenes at Beaulieu

Competent, fuss-free and dependable is this family hatchback, we say
Open gallery
Close

Okay, so its looks won’t set your heart on fire and its badges won’t turn the neighbours green with envy, but the Skoda Scala is a nicely judged and decently competent family hatchback, and now it’s a useful second-hand purchase, too.

The Scala offers a choice of two turbo petrol engines and one diesel. The 1.0-litre triple with 94bhp is perky enough, but the 113bhp version has a bit more overtaking urge, along with a six-speed gearbox for more refined motorway cruising. This was replaced by a 109bhp 1.0-litre unit in 2020. The 148bhp 1.5-litre four-pot is pretty swift and very refined, while the 113bhp 1.6-litre diesel is good for those who cover an annual mileage that would put a taxi firm to shame.

Click here to buy your next used Scala from Autocar

There are five trim levels to choose from, each with standard automatic emergency braking and lane-keeping assistance. S trim gives you 16in alloy wheels, LED headlights and a 6.5in touchscreen with a DAB radio and Bluetooth.

Step up to SE for rear parking sensors, automatic lights and wipers, cruise control and an upgraded 8.0in touchscreen system that includes Apple CarPlay and Android Auto to mitigate the lack of in-built satnav (although SE Technology, added in late 2020, does include the latter, plus front parking sensors). SE L includes 17in alloys, a 9.2in touchscreen with sat-nav and a 10.25in digital instrument cluster.

Monte Carlo trim is more of a styling pack, bringing a sportier interior and exterior and a glass roof. Where the Scala excels is in being a calm and competent performer. It does a great job of smoothing over the worst surfaces without being bouncy. The compromise is that it can feel a little floaty over crests and dips at speed. You will also notice more suspension noise, along with higher levels of wind and road roar than in some of its rivals, particularly when you’re travelling along a motorway. 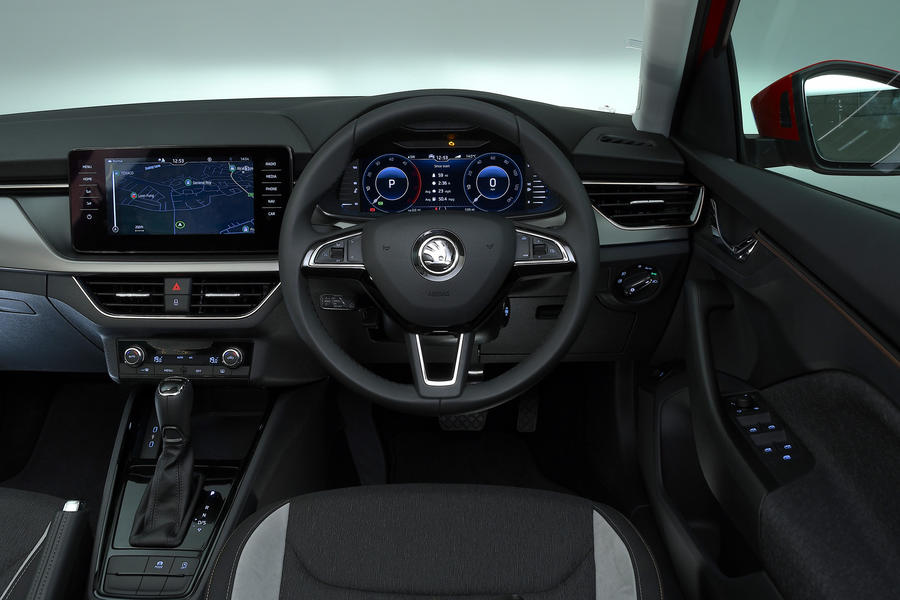 The Scala leans over more in the bends, due to its soft suspension, but it still grips well and handles very tidily, plus its steering gains weight progressively as you turn the wheel, giving you confidence to go briskly.

Another strong suit of the Scala is practicality. That it has plenty of room in the front and plenty of adjustment in the driving position is a given for a family hatch, but what’s different about the Scala is that it has a really spacious rear that copes well with bulky child seats and tall teens.

The boot is big, too, and shouldn’t have any trouble taking a pushchair. We even managed to squeeze seven carry-on suitcases into it. That’s not as many as the Skoda Octavia will swallow, granted, but it’s still much more than most other family hatches can take.

Predictably, the diesel burns the least fuel, at 57.7mpg, but don’t discount any of the petrols, because the difference isn’t vast. The 94bhp 1.0 TSI gets a combined 53.3mpg and both the 113bhp 1.0 TSI and 148bhp 1.5 TSI manage to achieve 51.4mpg (the later TSI 110 53.3mpg), the latter being helped by clever cylinder deactivation technology that reduces fuel consumption at a constant cruise. 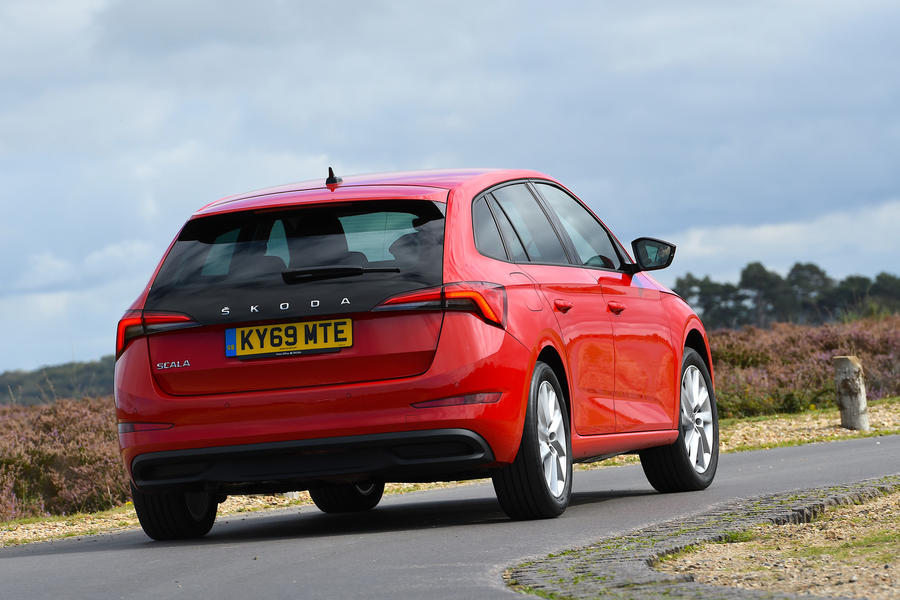 Engine: Some owners report that the stop-start system can be slow to re-engage. At least it can be turned off if you’re having this issue.

Transmission: Some owners report that the automatic gearbox doesn’t react quickly enough at slow speeds and can leave you in the wrong gear when slowing to come to a junction, so take a test drive before buying.

Make sure the auto gearbox has had its oil changed every four years or 40,000 miles. It isn’t part of the routine maintenance schedule, rather a recommended service. If the ’box fails due to infrequent oil changes, you will have to pay for a replacement.

Electric: There are a number of issues with the Apple CarPlay stopping working and not recognising your iPhone. There have also been some complaints of the rear-view camera feed staying on the screen after you shift out of reverse gear.

Recalls: There have been two recalls issued relating to the emergency call system. A software issue on Scalas made between July 2019 and February 2020 could prevent the system from functioning correctly so will need an update at a Skoda dealer. And some cars built between August and September 2019 will need to have the online connectivity unit (OCU) that’s a part of this feature replaced.

Reliability: The Scala is a little too new to have appeared in the latest What Car? Reliability Survey. However, Skoda managed an excellent 12th place out of 30 brands. The related Skoda Fabia finished 15th in the small car class, while the larger Octavia finished in eighth place in the family car class.

1.0 TSI 115: If you do mostly short journeys, the entry-level engine will serve you just fine. However, we would suggest the more potent version, because it gains an extra gear ratio for superior long-distance driving.

1.5 TSI 150 Monte Carlo: There’s no such thing as a wild Scala, but you can opt to mix the fizziest engine option (0-62mph in 8.2sec) and Monte Carlo specification, with its snazzy styling and sports seats.

SE: Of the five trim levels, the second one up provides all the useful equipment you will need, bar sat-nav. However, it gets full smartphone connectivity, so you can use a navigation app from your smartphone instead.

Why isn't the oil change for the automatic gearbox part of the routine maintenance schedule for heaven's sake?  If an operation to prolong the life of a component is to be recommended it should be in the schedule. I don't know if this is sheer irresponsibility or a cynical ruse to sell more replacement auto gearboxes, as I bet many owners will not be aware that this needs doing.

The  automatic DSG7 does not need oil change.

I think the Scala is a nicely styled, conveniently sized vehicle, which I'm sure would suit a lot of people's needs at least as well as a more fashionable SUV, and probably drive better too. I see very few around, though, and now the Fabia has been enlarged you wonder if it has much of a future.

My partner bought a 2018 Leon of similar spec for 12.5k with less miles and pre registered.
How prices have risen these last few years!