Honda’s Accord Type R is, like a good steak, rare and hot. In fact, some tip it as a future classic, yet prices start at £1200 today
Share
Open gallery
Close
Share story

With only around 600 on the roads and another 350 SORNed in lock-ups keeping dry, if any muchpraised 1990s sports saloon has the whiff of future classic status around it, it’s the Honda Accord Type R of 1999 to 2003.

Note: ‘future’. Although excited owners claim to have spotted prices stirring, you can still pick up a wellmaintained 2002 example with around 130,000 miles for between £2500 and £3000. Even a same-age, sub-100,000-mile car with a good history is unlikely to be much more than £4500. But those are cars for sale, and there aren’t many of them. The best ones are in the care of people in no hurry to sell, and with an eye on future returns.

See Honda Accord for sale on PistonHeads

They’re confident because the Accord Type R is so good. Its 2.2-litre four-cylinder VTEC engine thrives on revs, producing 209bhp at 7200rpm – ample compensation for its modest 159lb ft at 6700rpm. It cracks 0-62mph in about 7.0sec. Not hugely quick by today’s standards, but if that were the car’s only goal, perhaps Honda would have fitted a turbocharger. Instead, it fitted something far more intelligent (and useful): a Torsen limited-slip diff. And while practical types purr over the Accord’s saloon body, those with an eye on torsional rigidity know that such a structure spells good news in the handling department. Furthermore, it was beefed up with a strengthened rear bulkhead (the rear seats don’t fold as a consequence). Add a kerb weight of a little over 1300kg, multi-link double-wishbone suspension and a rapid rack and pinion steering set-up and you’ve a family car that runs rings around its contemporary front-drive rivals.

Being a Type R, it has other desirable stuff. Outside: a bodykit, chrome tailpipes, a rear spoiler (it could be deleted from the spec if the owner desired) and 17in alloy wheels. Inside: Recaro seats, a Momo leather steering wheel and titanium alloy gearknob, and carbonfibre trim with white dials. 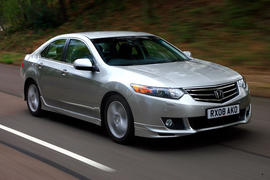 The model was facelifted in 2001. You can tell the later cars by the slatted grille in place of the old mesh one, a red ‘H’ badge and black tailpipes. Meanwhile, 0-62mph was a few tenths quicker (6.7sec) and the gearbox synchros were strengthened (so said Honda at the time).

The engine’s a thoroughbred that thrives on TLC: cambelt changes, fresh oil, the occasional EGR spring clean plus a good hot run to keep the VTEC system beating. Expect suspension components (bushes, drop links) to be tired by now but replacement is relatively straightforward (and a good excuse to fit stronger polyurethane parts).

Rust is your number one enemy. It lurks unseen around the bulkhead and even owners aren’t aware of it. For this reason, make sure the car has a fresh MOT. Assuming the body’s sound and the engine’s strong, buy an Accord Type R with confidence – and don’t store it. Instead, put it on the road, where it belongs.

“For the Accord Type R, we can source most major components, such as engines. They’re used, of course. If you need minor bits, Honda itself is your best bet. The engine is strong but, not surprisingly, requires regular oil changes. Bizarrely, the balancer shaft can vibrate, damaging the oil pump, so make sure you replace the pump if it seems suspect.

“The cylinders have fibre-reinforced metal (FRM) liners. They can wear over time, causing the oil consumption to increase. You can’t bore out the cylinder — you have to get a specialist to fit new liners.

“Rust is a big problem. The inner panels go first, so get the car checked out thoroughly because it’s expensive to put right. However, the gearbox problems [see right] are overblown in my opinion. In short, the Accord Type R is a great car — and so cheap.” A healthy engine will use about one litre of oil per 1000 miles. The engine will sound tappety from cold so let it warm through until smooth, listening for bottom-end noises (possibly worn con-rod shells or a wobbly bottom crank pulley). A diesel-like rattle at 2000rpm suggests the cambelt tensioner is about to fail. Check for weeping crankshaft oil seals, and failing camshaft oil seals at the distributor and on the front of the head by the exhaust manifold. The EGR system will probably need cleaning, which is a half-hour job.

Pre-facelift cars can suffer weak fifth and reverse synchros. (There was an official fix but not all cars were seen.) Feel for crunching and budget for up to £800 to put right. Expect up to 100,000 miles from the clutch. If it feels heavy, budget for a new one and have a lightened flywheel fitted.

Watch for rotten brake pipes and fuel lines where they run behind a plastic tray under the car. A garage will do the fuel lines for about £100, but if you’ve got around £50 and 10 hours, you can do the brake lines yourself, although it’s a nasty job. Check the pads and discs (ventilated at the front).

Most suspension parts will be worn. For example, a knocking or rubbing noise could indicate the anti-roll bar drop links are broken. New ones are inexpensive and easy to fit.

Check for rust on the wheel arches, behind door seals and under the bonnet but especially on the bulkhead. Look behind the clutch fluid reservoir, under the seal above the wing mirrors, the footwells, above the accelerator pedal and behind the wheel arch liners. Meanwhile, check that the automatic headlight levelling system works and that the rear door handles work.

The owners’ club (accordr.org) is a great source of advice and information on the increasingly rare Accord Type R. Forum topics such as ‘bulkhead rot’ (see above) and ‘timing belt kit’ should be music to any prospective owner, while the ‘need help and advice with valuation’ section, which lists a raft of expertly chosen upgrades, promises hours of enjoyable bedtime reading.

28 May 2017
Turbo petrol engines use more than that when the engine isn't even worn.

30 May 2017
1 litre per 1,000 miles was considered within spec for quite a lot of the performance end of '90s mainstream car ranges, including Audi and Peugeot. It was in the owner's manual. Most examples would use less, but you were expected to be a bit more pro-active about checking and topping up than perhaps we are used to today.