BACK TO ALL NEWS
Currently reading: Ferrari power for less than £30,000 - used car buying guide
UP NEXT
New 2021 BMW M5 CS sets records for pace and power

Few engines are capable of providing greater thrills than those built by Ferrari. We find the five cheapest ways of experiencing one
Share
Open gallery
Close
Share story

Few cars enjoy such a hallowed status as Ferraris, but getting into one of your own is notoriously expensive. If you're prepared to do some digging, however, prices suddenly take a tumble on used models. Here's our top picks.

The badge may say ‘Fiat’, but under that curvaceous bonnet beats a quad-cam Ferrari V6, the same unit found amidships in the two-seat Ferrari Dino.

To help Ferrari to homologate its car for racing, the V6 was shared with this beautiful Bertone-designed coupé, where it gave 158bhp at 7200rpm in 2.0-litre form and 177bhp in the later 2.4-litre versions.

Lovely to look at and sit in, the Dino Coupé was also a tactile delight on the road and as good in the corners as it was on the straights.

For years it’s been an overlooked gem, but prices have recently taken off. Tatty examples can be had for £10k-£20k, but you’ll need £30k or more for a good one. Shop carefully, and expect bills to be large, but don’t let the badge put you off.

Some thought this big, front-engined GT too tame and were only happy when the harder-edged 612 Scaglietti replaced it. Others saw it for what it was: beautiful, elegant, understated and fast.

With 436bhp from that lovely 5.5-litre V12, the 456 could run to 62mph in 5.1sec, and at the time it was the world’s fastest four-seater, with a top speed of 188mph. On the road it was supple, sophisticated and user-friendly; it also had a sumptuous leather interior and room for a couple of children.

Early examples can be had for around £30k, especially left-hand-drive or automatic models. It has a good reputation for reliability, but parts are extremely pricey, so look for a full history and check for accident damage.

Here’s a real wolf in sheep’s clothing: a front-wheel-drive, four-door saloon with a Ferrari V8 under its bonnet.

Based on the engine found in the 308 Quattrovalvole, this 2.9-litre unit turned the Thema into a bit of a hot rod. With 212bhp to hand, it could polish off the 0-62mph sprint in 6.9sec and go on to 149mph. It was good to drive, too, with neutral handling and a supple ride, all accompanied by that wonderfully sonorous V8 soundtrack. The opulent interior has room for all the family, too.

Finding one might be a problem, though. Few were made and fewer still imported, but examples crop up from time to time for as little as £10k. Set aside plenty of money for maintenance

Some enthusiasts view the Mondial with disdain, unable to overcome its entry-level status and 2+2 layout, but ignore them: on the road the V8 sings and the chassis is a delight, with many thinking it sweeter in the ride and handling than the equivalent two-seat models. Later models boast four-valve heads and larger engines for more performance.

Find a good one and you’ll get one of Ferrari’s most reliable and inexpensive cars. You can put a prancing horse in your garage for under £20k, but you’ll have to be quick; prices are on the up.

Beware, though: buying a cheap Ferrari doesn’t mean cheap running costs. Proper maintenance is vital.  Rust is the most common problem, so ask a specialist to check the sills and wheel arches carefully. 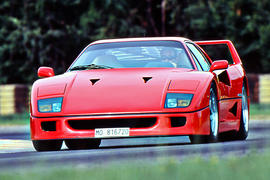 It may be hard pushed to keep up with a Vauxhall Astra, but don’t dismiss the 400 (and the later injected 400i). The weight of this large, luxurious four-seat grand tourer inevitably compromised performance and agility, but the elegant Pininfarina lines still look great today, and the 335bhp 4.8-litre V12 imbued this car with the heart and soul of a Ferrari.

Although the automatic gearbox option (a Ferrari first) made purists weep, it went on to outsell the manual by two to one. Later models had suspension tweaks and improved handling.

Early 400s can be had for £20k-£25k, and good ones for £30k. Running costs will be high, though, and a history and a specialist inspection are desirable.

You can see cars such as ferraris that cost £60,000 or more new advertised at a couple of thousand quid or less, but most buyers in that sector wouldn't be able to put on a set of decent new tyres, never mind pay for a major fault to be fixed. More and more cars are going to fall into this bracket in the future. Expenses are getting way, way out of hand and we will end up with a huge amount of costly scrap metal because those who would buy them when they are old couldn't afford to run them.

the Maserati 3200gt is not Ferrari powered, but uses the final incarnation of the venerable Maserati V8.

It's successor, however, the 4200 is and uses a detuned version of the Ferrari 430 engine.

Sorry to seem pedantic, but as a 3200 owner I had to say something!

No-one would recommend a Mondial who has lived with one, unless he thought you wanted to buy his.
BertoniBertone 5 May 2015

Who'd recommend a Mondial other than.....?