Shell is trialling large batteries for energy storage at its EV charging forecourts, with the aim of providing ultra-fast EV charging in areas with restricted access to national grids.

Implemented in pilot form at Shell’s forecourt in Zaltbommel, the Netherlands, the system comprises a 360kWh on-site battery that stores electricity to increase capacity.

This allows drivers to use two 175kW EV chargers simultaneously. Normally, such performance would require a costly grid upgrade, but the presence of an on-site battery avoids this.

As the site’s chargers use 30-70kW on average together, the battery can be easily charged for times when more energy is demanded.

Developed in partnership with Alfen, an electricity distribution specialist, the battery system will also optimise grid stability, according to Shell. This is because spare capacity from the battery can be sold back to the grid at times of high demand. 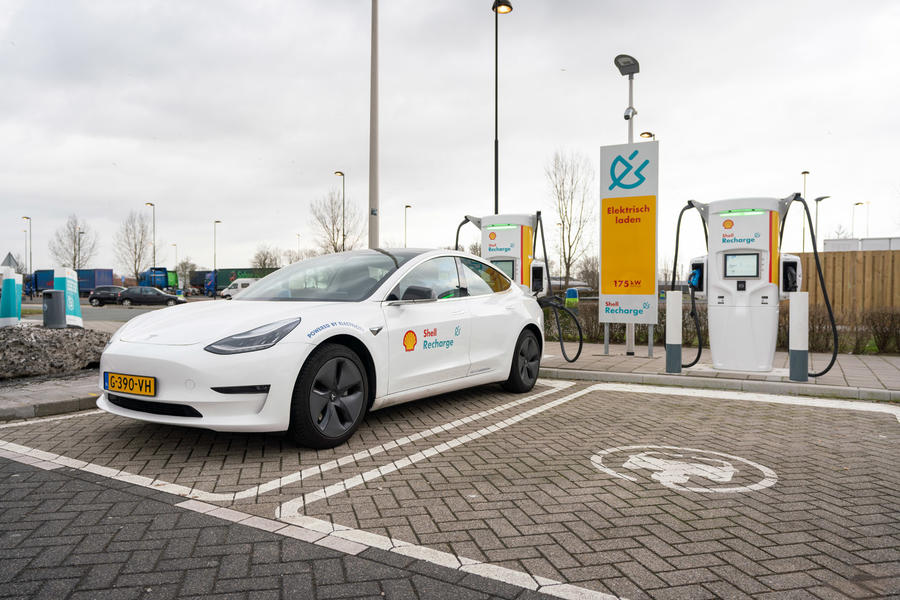 “Using stored energy helps maximise the use of renewable energy,” said Shell, with the added benefit of providing an extra source of revenue.

The vice-president of Shell’s Electric Mobility arm, Roger Hunter, said: “By supporting the introduction of additional ultra-fast charging points, this solution can help meet customers’ charging needs at grid constrained locations, both at Shell-owned retail stations and also at our customers’ premises.”

The forecourt battery pilot scheme is the latest of several ventures into sustainability for Shell. Its launch comes just weeks after the company emphasised its commitment to becoming a provider of net-zero-emissions energy products. By 2025, it aims to have a global network of around 500,000 EV chargers.

In the UK, Shell recently announced its first all-EV charging station, dubbed Project Evelyn, which will open in Fulham, London, later this year. Shell plans to have a combination of 200 rapid and ultra-rapid chargers on forecourts across the UK by the end of 2021.

Shell isn't the first company to experiment with a battery at forecourts. British company Gridserve recently revealed at its forecourt in Braintree, Essex, a 5MWh battery storage system that can store up to 20,000 miles' worth of energy, fed by solar panels on-site and at a dedicated solar farm nearby.

How Shell is reinventing the fuel station for EVs

Oh and good news for the wealthy EV owners that live somewhere near fulham.

First the hubris then the reality of having to send millions of watts down wires sinks in.

400/800 volt vehicle charging systems ain't gonna make any difference to the grid/supply side.