Gordon Murray, the Global Vehicle Trust and Sir Torquil Norman are behind the Ox truck, which can be built and driven in remote areas
Open gallery
Close

The world’s first flatpack truck, which was designed by Gordon Murray to be made in the UK and built up quickly and easily in emerging markets, has been commissioned for build by Shell and will be taken to India for demonstrations.

The Ox, which was revealed in driving prototype form by its charitable backer, the Global Vehicle Trust (GVT), in 2016, was being funded by through crowdfunding (here's the page). Money was used to make modifications to the first version, including a new, more hard-wearing gearbox, powertrain tweaks, a more powerful cooling system, more durable steering components and a 200mm extension to the truck's wheelbase to make it perform better off-road.

Now, oil and gas giant Shell has helped to move the project forward by ordering a bespoke example to India, where it will demonstrate the vehicle's abilities – which include carrying payloads of up to 1900kg or seating up to 13 people – with the intention of drawing in potential customers. 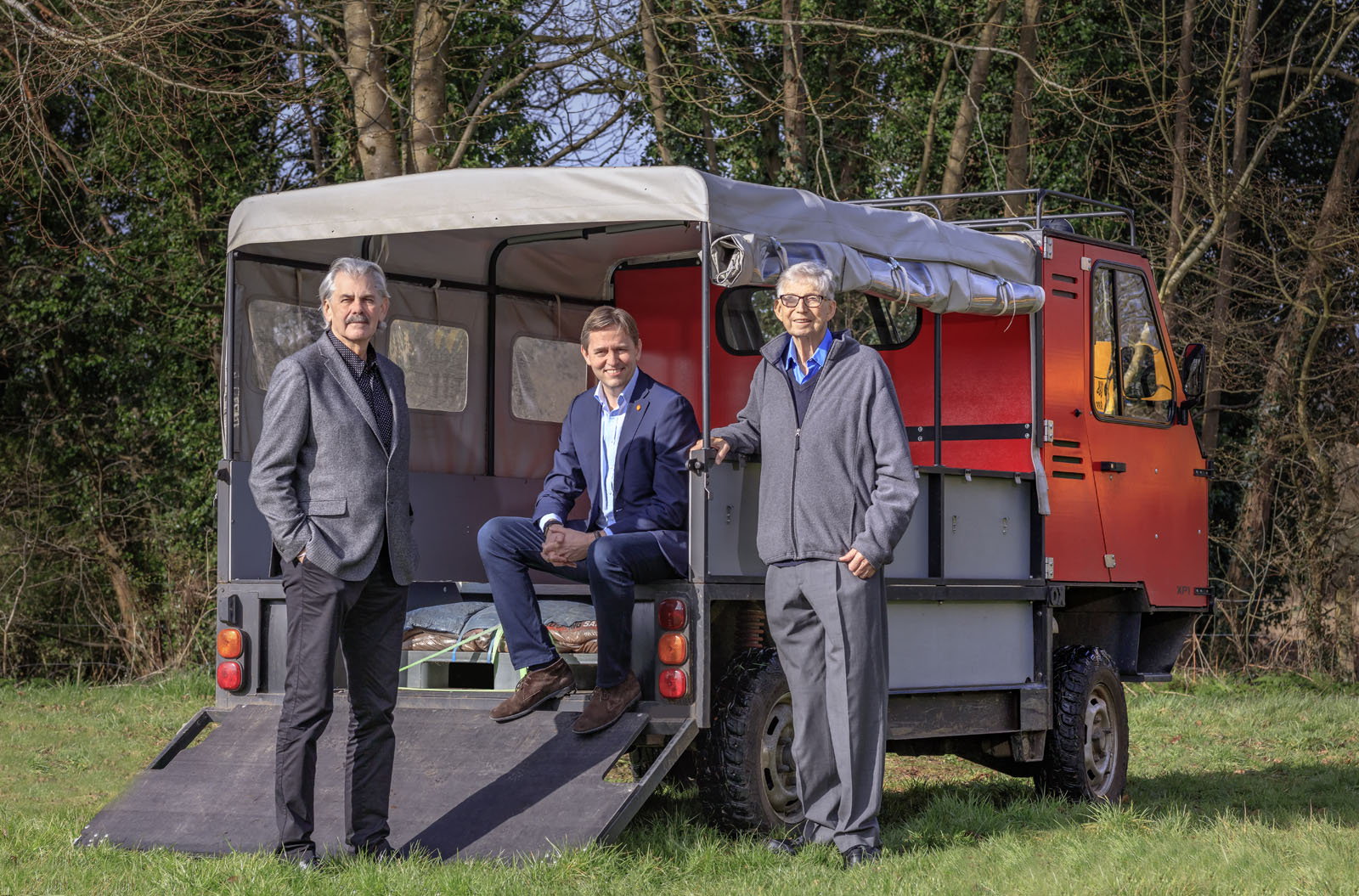 “Shell is eager to play a role alongside others in developing and promoting mobility solutions in developing regions," said Huibert Vigeveno (above, middle), executive vice president of Shell Global Commercial.

"The Ox to India demonstration will have the concept validated and discussed on the ground in a real-world setting. We know limited mobility in hard-to-reach communities in developing economies can restrict access to basic services and limit the effectiveness of efforts to improve quality of life."

The Ox was the brainchild of entrepreneur Sir Torquil Norman (above, right), GVT’s main backer. Five years ago, Norman formed a partnership with Murray (above, left) to use the British designer’s iStream design principles to create an extremely durable, all-terrain light truck specifically for remote parts of Africa and other developing areas, such as those in India. 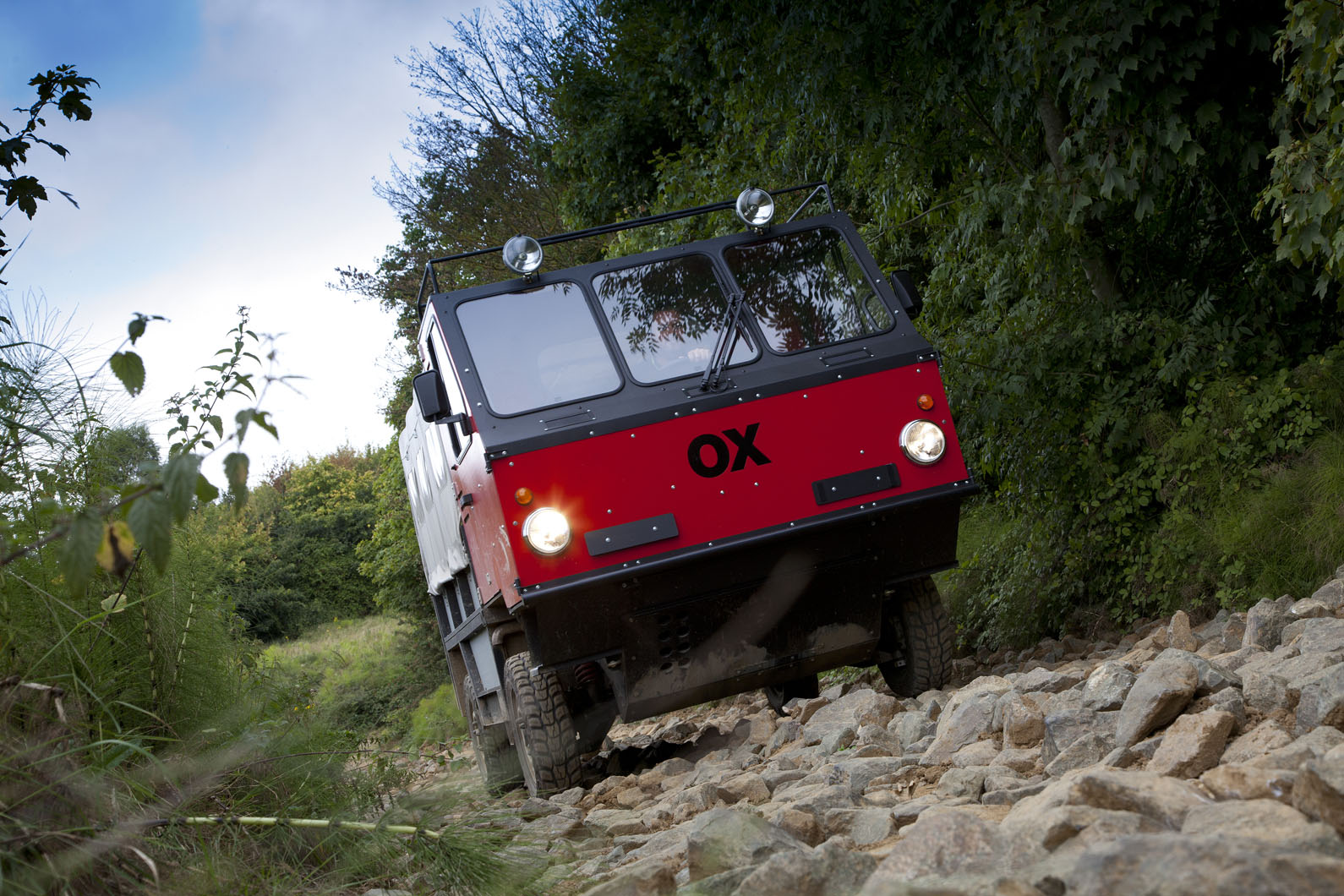 About £3 million was spent on three Ox prototypes and the project has attracted interest from major vehicle makers. A further £3m is needed to put the truck into production, and Shell's plans to take the vehicle to India could be pivotal in securing this.

The Ox is about the same length as the Ford Focus but can carry almost two tonnes — twice as much as any car-based pick-up truck. Its central-seat, cab-forward design leaves load space for eight 44-gallon drums, three standard pallets or 10 people on bench seats that can double as sand ladders (three more can sit in the front). The tailgate detaches to form a ramp, up which drums can be rolled or a loading crew can walk. 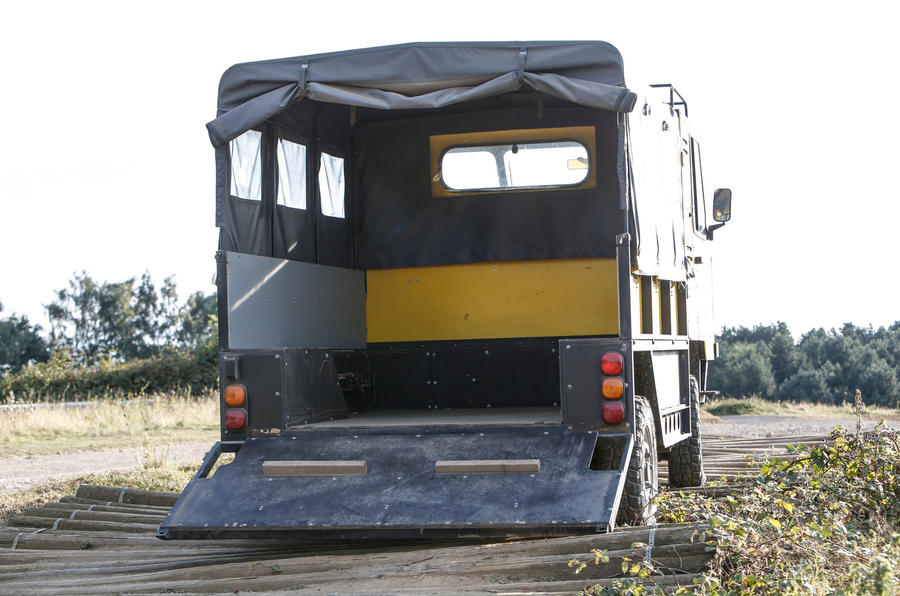 The chassis is a steel ladder with bonded-in wooden panels to provide torsional rigidity – a key iStream principle.

The mechanicals, including the 98bhp 2.2-litre four-cylinder diesel engine and six-speed gearbox, are taken from the Ford Transit van. The all-coil, all-independent suspension uses simple, long-travel steel leading arms in front and trailing arms behind, and the suspension parts are identical side to side.

At first, the Ox was demonstrated with a simple front-wheel drive layout, which saves weight and complication, but four-wheel drive versions are possible, according to Murray. However, the Ox has better ground clearance and shorter overhangs than most pure off-roaders and early testing in rough and muddy terrain has returned such good results that the partners question the early need for four-wheel drive. 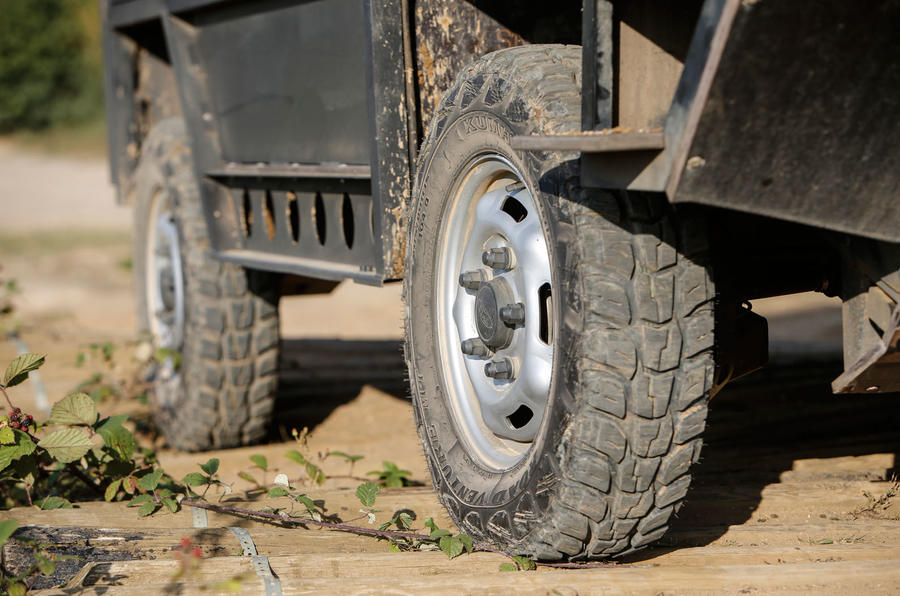 The truck's body parts — mostly flat panels in ultra-durable coated plywood — are also identical side to side, as are the seats and flat windscreen pieces. The entire cab section is designed to fit, before assembly, inside the chassis rails in such a way that an Ox doesn’t even need to be crated-up for shipping. Six Ox kits, complete with engines, fit into a standard 40ft container. A team of three can assemble one in less than 12 hours, needing no special tools.

If the right backing can be found, Murray and GVT believe work already done would allow a UK manufacturing plant to be sending the Ox to market — which might include European as well as emerging market destinations — within two years. 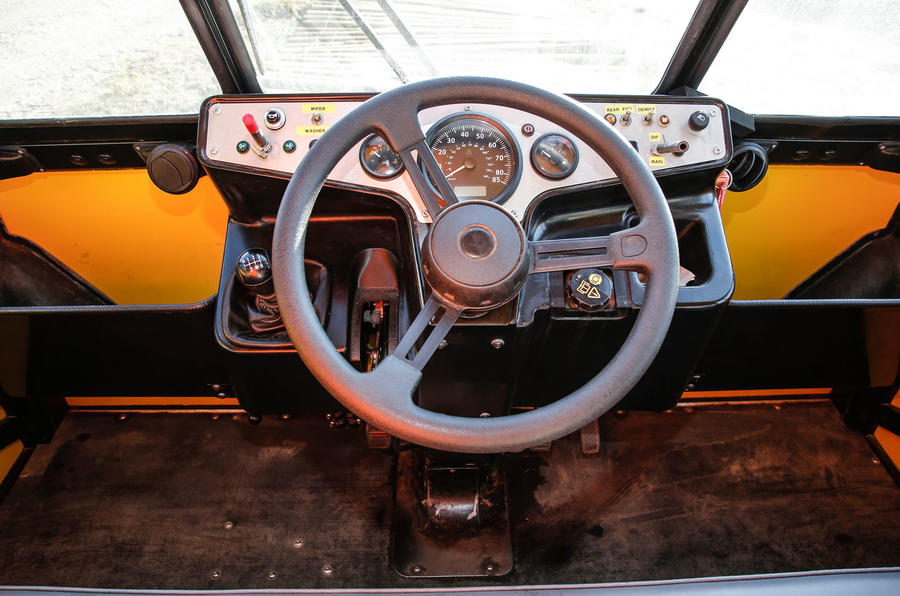 On the road in the Ox

The surprises start early. You’d expect extreme crudity in a flat-pack vehicle with no interior trim whatsoever, and you get it. But you also get surprising sophistication.

Sure, this isn’t the quietest vehicle you’ll ever ride in, but for strength, traction, stability and a flat and level ride — the things that matter — the Ox is really remarkably good, even carrying a one-tonne test payload.

You sit very high and very close to the nose, which takes some getting used to, and there’s zero side support in the non-adjusting bench seat, but the steering is accurate, the gearbox feels familiar (although the first and second ratios should be closer) and that Transit motor packs plenty of torque. 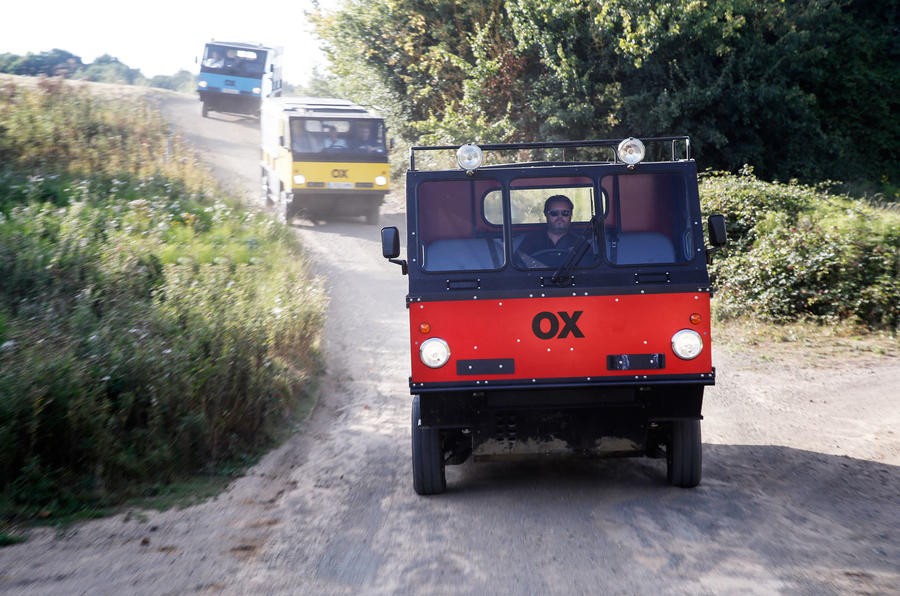 “The Ox is built for really rough roads where normal vehicles give up,” says Global Vehicle Trust’s Henry Labouchere, who has given the yellow prototype “a really good workout” on his Norfolk farm.

“We’ve used it for everything you’d do with a Land Rover,” he says, “and it has always come up smiling.”

For example, if we're talking about a large box, maybe a 20-foot long truck, we'd see lots of options and they might look like this https://engineswork.com/products/tools/best-truck-tool-boxes.html:$10,000 - 5 foot and 1/2"$10,000 - 6 foot and 5/8"$15,000 - 10 foot and 1/4"$16,500 - 15 foot and 1/4"A full-on 15+ foot, 6-foot, and 1/4" box might be considered a "bustard tool box" when compared to something that's 2 feet wide at the widest part - perhaps a 4-foot wide tool box for work that's being taken apart for the job site or an 8-foot wide box that would be the minimum for a garage repair operation.To get a handle on things properly, it helps to look at these general categories of tool boxes and to see what size they can have the top half cut off the lid. But the basic idea is always the same: make sure the material or material combination will fit between two bolts. That usually means that a box with three or more bolts is usually too small, and one or two is too large

"...will be taken to India for demonstrations"

Erm, why? It's a country with a large indigenous vehicle manufacturing industry and various JVs, producing around 800k commercial vehicles a year (around 10x the number the UK produces). Taking this thing there for 'demostrations' has a bit of a whiff of naivety and/or arrogance.

I hope that no crash testing is require, I hate to see this clever vehicle becomes dust and ashes. The world must be richer in order to make emerging market people more survivable.