The Tata 'Super Nano' has a 200-odd bhp superbike engine in the rear, an appropriate braking and suspension system and tonnes of attitude
Open gallery
Close

Certifiable, crazy and insane are just some of the ways you can describe the Tata 'Super Nano'. And you wouldn’t be far off the mark; what with a claimed 200bhp-plus kicking out of the rear and those mad, mad wheels. But just what is it? Weekend track car, real racing car or something to drive to the movies in?

I put the question to J Anand (of JA Motorsport). “Well, officially, it’s an engineering showcase, a sort of here’s what we can do. But it’s also loads of fun and shows the Nano in a new light.”

Like he said, that’s the official answer. I, however, think this is what happens when you make an ex-racing driver pilot a 37bhp Nano around, month after month. Of course, Jayem Auto, JA Motorsports’ mother company, works closely with Tata Motors on many of its engineering projects, so, the Super Nano is a step in the right direction too.

But what’s a 200bhp Nano like to drive? It’s clearly racing car-like to climb into. You need to squeeze your way past the jungle gym-like roll cage, and seat adjustment is only via a set of spanners. Once in, you get clipped into the racing harness and it even needs an external power supply to get going. Everyday usability? You can forget that.

What I discover later, however, is that there’s much more performance at the top of the powerband: of course, there is. What’s worse is that I’ve been shifting up at what I assumed was the redline, but there’s at least 3000rpm more to go. No earplugs needed though, to protect from that shrill F1 car wail; now I’m officially deaf.

The motor, in fact, only really wakes up past 8000rpm and then, this junior dinosaur quickly turns into a full-fledged T-Rex, big steak knife teeth and all. And only then – as I begin to hit the 11,000rpm mark regularly before snap shifting to the next gear – does the real Super Nano begin to reveal itself. The rear squats down marginally as I accelerate out of a tight corner, the scenery comes rushing at me in a blur past 8500rpm, and so continuous is the build-up in acceleration, it feels like the car is running away from you.

What’s also pretty unreal is the grip this car generates. Of course, it’s nothing like a Nano, which bobs and rolls constantly and feels like a shopping trolley. In contrast, the Super Nano is low-slung and wide, and comes with tyres that are at least five times as wide. I find myself carrying an incredible amount of speed into corners, tapping down on the gearbox as I turn in with a fair amount of controlled aggression. And once settled, I can accelerate as hard as I want, the front wheels going a bit light with the weight transfer to the rear. 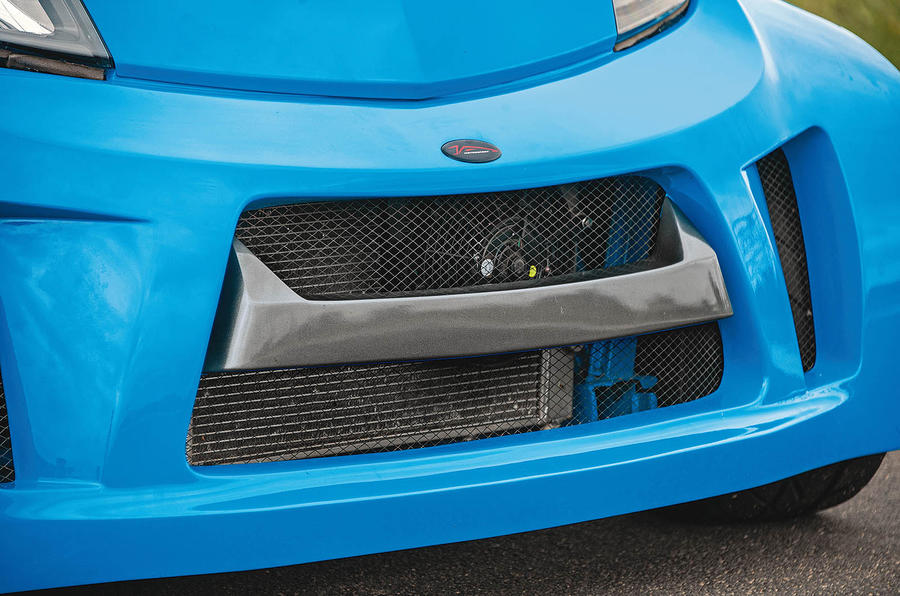 The set-up does favour straight line stability over agility so it understeers quite a bit, and the unassisted steering needs a bit of heave-ho. But for something that started out life as a Nano, this is simply unreal. How I’d love to drive this on the road and scare a few sportscar owners. “Darling, did we just get blown away by a Nano?” I’m sure J Anand does that every time he wants a bit of a laugh. The unassisted brakes, however, do take some getting used to, the pedal pressure required by the AP racing brakes is a bit unnatural.

Which brings us back to the seminal question: what is it?

Is it just a Nano with a more powerful motor and bigger wheels? Clearly not. Under the wider track and extrovert body, this beast is part-superbike and part-F3 racing car. It uses a modified superbike engine and gearbox, yes, but the wheels, brakes and tyres are pure racing stock. There's also there’s an additional tubular chassis-cum-roll cage for extra stiffness on the Super Nano’s custom-made A-arm suspension bits.

I’m also a sucker for the Super Nano’s over-the-top looks. That wide track is just crazy, the massive wheel arches give it plenty of character; and don’t you just love those vertical slots next to the air dam that allow air through to the brakes?

So, the Super Nano is a piece of civilised lunacy based on a utilitarian platform. And why do I really badly want one? Well, because it’s there.

Shapur, that was a great video. Found myself smiling all the way through. Call the Beeb and inject some life into my Sunday night viewing.
rybo1 10 June 2016

Some people were bored and created this nonsense.
jason_recliner 9 June 2016

Completely bonkers, but I want one.
View all comments (5)