BACK TO ALL NEWS
Currently reading: Toyota GR 86 sells out in just 90 minutes in UK
UP NEXT
Bentley Batur: new Mulliner car to arrive on 21 August

Toyota GR 86 sells out in just 90 minutes in UK

Every example of long-awaited sports car snapped up, with no plans for a new UK allocation
Open gallery
Close

The long-awaited Toyota GR 86 sports car has sold out in the UK, with the entire market allocation spoken for within 90 minutes of orders being opened last week.

Sales of the much-anticipated Toyota GT 86 successor opened earlier this month, with a starting price of £29,995 making it one of the most affordable sports coupés on sale.

In less than an hour and a half, the Japanese firm closed down the UK ordering platform as the limit was hit.

Production of the Toyota GR 86 is only set to run for two years, and bosses have warned: “When they’re gone, they’re gone.” This is due to the car not readily complying with incoming crash regulations.

Toyota also told Autocar that any additional allocation for the UK market is “not in the plan at this stage”.

Yet all is not lost for those who missed out. Toyota says they have all been offered a place on a waiting list, in case any orders are cancelled. This, the firm adds, will be operated in a chronological order against the time customers tried to order.

Following the speedy sellout, a Toyota spokesman said: “The rush to secure a car reflects the hugely enthusiastic reception given to early prototypes by the UK's automotive media, and the fact that the car will come to the end of its production run in Europe within two years.” 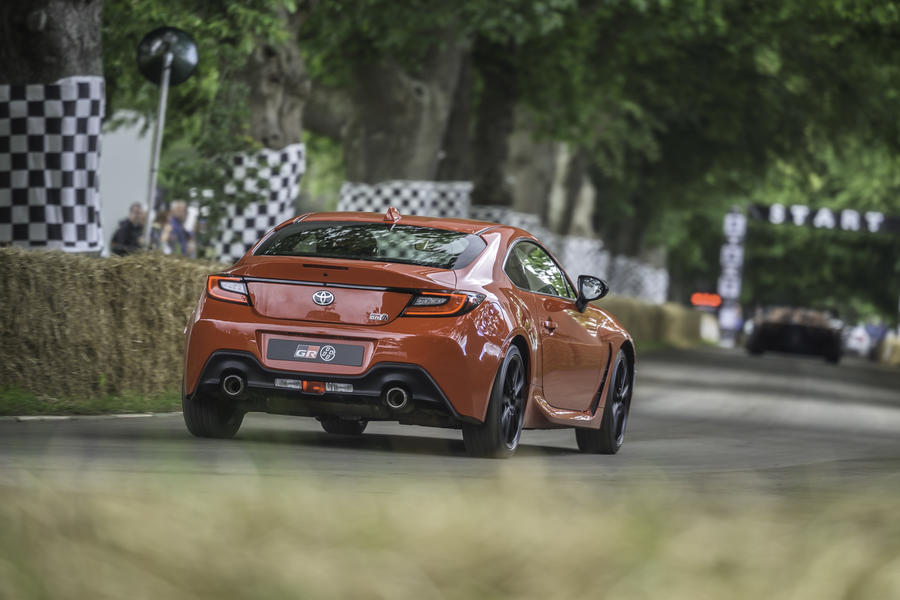 UK deliveries of the GR 86 are set to begin in July.

The car’s low starting price is a big factor in its appeal; at less than £30,000, it is immediately a close rival for mid-rung versions of its closest rival, the Mazda MX-5.

This simple pricing structure sees the GR 86 offered in just one trim level which brings 10-spoke 18in alloys wrapped in Michelin PS4 tyres, an 8.0in touchscreen with smartphone integration, a reversing camera and blind spot monitor, LED adaptive headlights and a 7.0in digital gauge cluster.

Perfection? Not quite, but nothing this usable gets so gloriously close for the asking price

Buyers were also able to opt for an automatic gearbox for an extra £2,090.

The rear-drive four-seater was revealed last year alongside the new second-generation Subaru BRZ, with which it was jointly developed and made its dynamic debut at the Goodwood Festival of Speed last year before Autocar drove it for the first time in prototype form a few months later in Spain.

The new BRZ won't be offered in Europe. Toyota claims the two models have been developed through a "friendly rivalry" and will both offer a "distinct driving feel".

Peak power arrives at 7000rpm and the unit is able to rev to 7400rpm. Japanese buyers will have a choice of six-speed manual and automatic gearboxes. The GR 86 also features Subaru's Eyesight driver assistance systems.

Toyota says a major focus has been on retaining the “essential fun-to-drive” characteristics of the GT86, which was launched in 2012, and a key part of that has been minimising the weight. The new car has a claimed kerb weight of 1270kg, which is 5kg lighter than the original. Toyota says this has been achieved through features such as the use of an aluminium roof and body panels.

The GR 86 has virtually identical dimensions to its predecessor, measuring 4265mm long and 1310mm tall, with a wheelbase of 2575mm. Toyota has kept the centre of gravity low and claims the torsional rigidity of the new model has been increased by around 50%, resulting in “even sharper handling and steering.”

The new model also features aerodynamic front air ducts and side panels, which, Toyota says, are based on learnings from its motorsport programmes and aid handling and stability.

The change of name from GT86 to GR 86 brings the coupé in line with the rest of Toyota's current GR performance line, joining the GR Supra coupé and GR Yaris hot hatch.

Log in or register to post comments
d79m 23 April 2022
I notice no where in the article does it actually say what the uk allocation actually is thats 'totally sold out'. The fact that I think ive seen about three on the old cars on the road since they came out means they have just allocated very few cars for the uk rather than them being a sales success
si73 21 April 2022
Surely this shows Toyota the desire for this car, best they ramp up production and allocate a few more this way.

@ gavsmit, agree car prices do seem ridiculously high as though, as you've said before, the manufacturers are trying to make EVs seem closer, yet this sports car actually seems cheap, well equipped with more than enough performance, this surely shows how over priced so many others actually are.

Surely this shows Toyota the desire for this car, best they ramp up production and allocate a few more this way. @ gavsmit, agree car prices do seem ridiculously high as though, as you've said before, the manufacturers are trying to make EVs seem closer, yet this sports car actually seems cheap, well equipped with more than enough performance, this surely shows how over priced so many others actually are.

why would honda, ford etc pump up their prices to make BEVs when they barely make any let alon sell them.

What a ridiculous situation, both that it's sold out and also that it will fail safety rules in 2 years time, when it's almost certainly far safer than most current cars on the road

"almost certainly" in English is "probably not" in Japanese