BACK TO ALL NEWS
Currently reading: Touring Superleggera Aero 3 is retro-inspired V12 supercar
UP NEXT
MST Mk1: Is this the ultimate rally recreation?

Italian coachbuilder Touring Superleggera has unveiled the Aero 3 as a restyled, limited-run take on the Ferrari F12 Berlinetta.

The Milanese firm, known for the radically styled Alfa Romeo Disco Volante and Mini Superleggera Vision, says the new arrival is “the latest in a design concept that hails back to their historic role in developing the science of automotive aerodynamics”, and its motto - “weight is the enemy, air resistance the obstacle” - has underpinned its development.

The carbonfibre-bodied Aero 3 retains the overall silhouette of the F12 but has been completely redesigned, taking inspiration from mid-20th century Italian coachbuilders and 1930s race cars. Touring says each of the 15 cars being built will take more than 5000 hours to complete.

The car receives a completely new front end, dominated by a unique trapezoidal centre grille and a pair of prominent air intakes. The bonnet does away with the F12’s trademark central air scoop in favour of a more aggressive intake design, while a heavily redesigned side profile incorporates large ducts that channel air along the car from extractors in the front wheel arches. 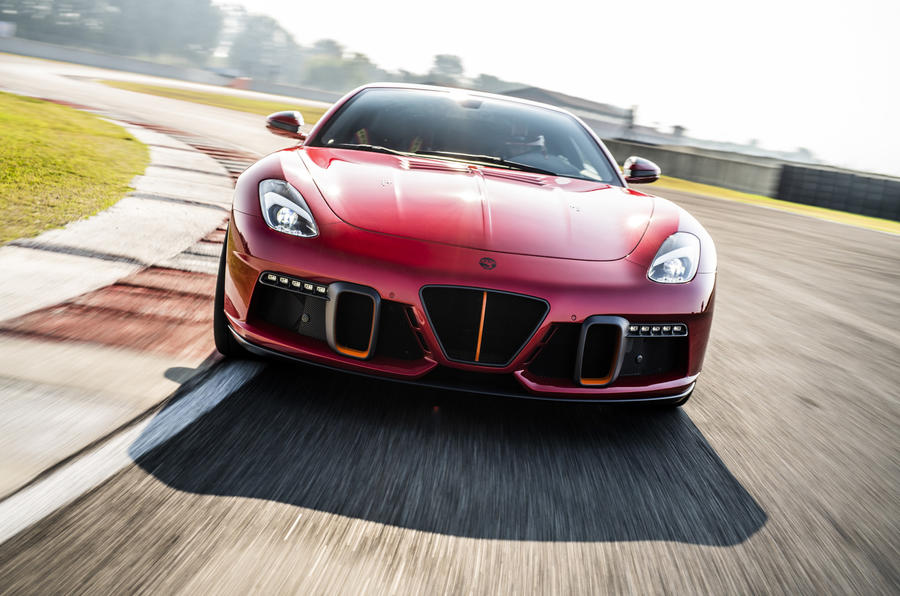 The most obvious addition is a large ‘sharkfin’ that runs down the centre of the car’s rear end, paying homage to Carozzeria Touring’s pioneering wind-tunnel development work in the “golden days” of Italian coachbuilding.

Head of design Louis de Fabribeckers called the fin a “very natural extension of the teardrop shape of the passenger compartment” and added that, although it plays no active aerodynamic role, it “evokes Touring’s aerodynamics legacy from the 1930s onward”.

The F12’s underpinnings, including its aluminium spaceframe chassis, 730bhp 6.3-litre V12 engine and entire electrical system, are carried over unaltered, but a switch from aluminium to carbonfibre for the body panels has shaved nearly 150kg from the kerb weight, despite a near-200mm increase in length.

The first example to be completed, shown here, is finished in the same shade of Stratosphere Red applied to the Disco Volante from 2013. This also features as a secondary colour in the cabin, which has been upgraded with aluminium and carbonfibre trim details and Foglizzo leather upholstery.

The debut model wears race number 19 in reference to the Touring-bodied Alfa Romeo 8C 2900 B LM Coupé Berlinetta Aerodinamica that raced at Le Mans in 1938.

Touring hasn't published pricing details but says that costs will vary because “each car can be trimmed and fitted to the buyer’s individual preferences”. Buyers will receive their Aero 3 six months after handing over a standard F12. Three units have already been sold.

Subjective. Why not restyle models that need restyling. Got some front to mess with the beautiful F12 IMO. Still, what do I know.
Peter Cavellini 21 September 2020

They have sold three so far, so, someone likes it,and that's ok, it just looks odd from certain angles.

They have sold three so far, so, someone likes it,and that's ok, it just looks odd from certain angles.

Yep, this thing is exceedingly cool.  The F12 was no slouch in the looks department, but this is just next level.